Olduvai Gorge – Touching the roots of your family tree 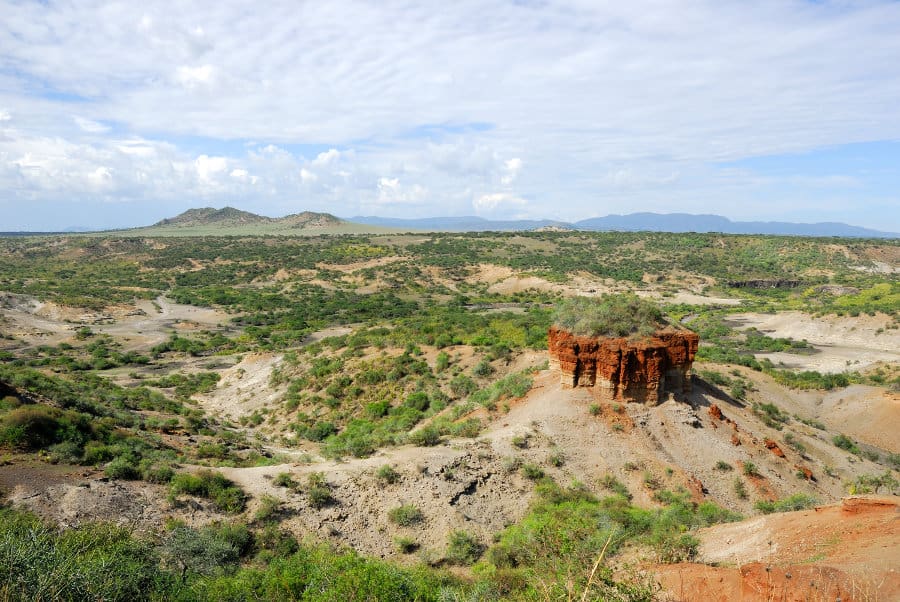 Olduvai Gorge is home to the oldest evidence of human existence. We all have our roots on the East African plains and this magnificent gorge is the proof.

Archaeologists have dug up the oldest fossilised remains of our ancestors here. The skulls and bones date to homo habilis and prove that people were living in East Africa some 2 million years ago.

This site has proven more about early human evolution than any other in the world. Africa is where we all originate and the atmosphere at Olduvai is very special, allowing you to connect with the roots of your own family tree.

This article guides you through Olduvai Gorge, including what’s been found, how to visit, and what it all means to the world.

Where and What is Olduvai Gorge? 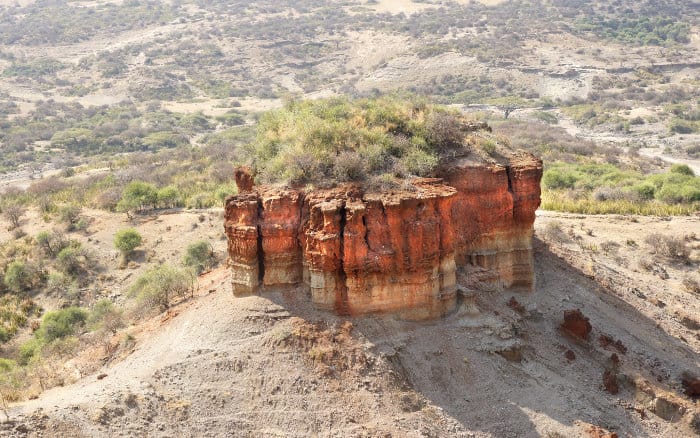 Many archaeological sites are in the middle of nowhere. That’s true of Olduvai Gorge. It’s certainly nowhere near any town or city.

However, the gorge remains in the middle of the cycle of life. It’s located in northern Tanzania, inside the Ngorongoro Conservation Area.

Look out from the archaeological museum and you gaze upon the Serengeti plains, home of the great wildebeest migration.

It should be no surprise that Africa’s largest collection of four-legged mammals is found in the place where humans originate. The volcanic soil is rich in nutrients and wildebeest grow at double the speed here than anywhere else.

Although there is no proven scientific link this is surely more than coincidence? The place where human life began is now the place where the largest wild mammals can thrive?

What does Olduvai Gorge mean?

Like so much in Northern Tanzania Olduvai is a Masai word. The Masai word is actually Oldupai and refers to a sisal plant that grows wisely in the surrounding area. So Olduvai is literally the place of the sisal.

It’s easy to miss the gorge when approaching from the Serengeti. Gaze across the plains and it’s all zebra and gazelle. Only when coming to within a few hundred meters does the gorge reveals itself.

Stretching some 30 miles long the narrow gorge carves a dramatic path across the grasslands. At 90 metres deep it doesn’t quite meet the definition of canyon, and it’s certainly not the same size as Africa’s largest canyon.

Amazingly, Olduvai Gorge only formed 30,000 years ago. So the people who lived here existed on a very different landscape.

Visit the gorge and the first thing they tell you is that it’s not Olduvai, but Oldupai.

Olduvai Gorge Proves That We Exclusively Came From Africa 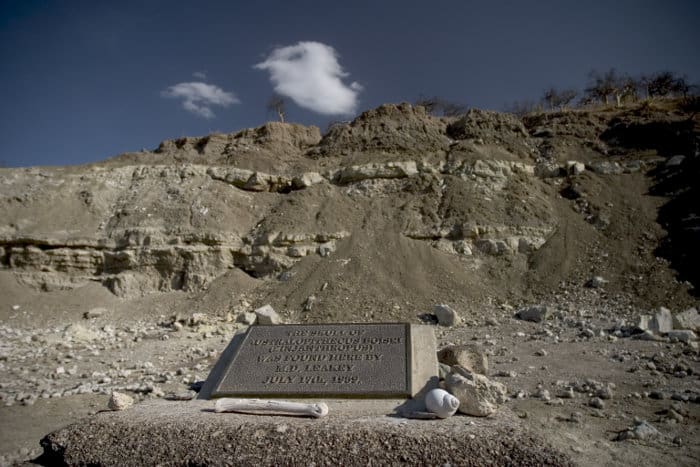 How did they find human fossils?

Back in 1911 two German researchers stumbled upon the fossil remains of a three-toed horse in Olduvai Gorge. That aroused interest and by 1957 there had been six different expeditions.

Since then over 1000 individual remains have been found, including a skull, a femur, teeth, tools and hundreds of bones. There was enough to create a replica of what early human looked like.

How old are the fossils at Olduvai Gorge?

Using carbon dating and a variety of other scientific methods they dated some of these bones and fragments to 1.9 million years ago. That’s older than most other palaeoanthropological sites in the world.

As well as homo habilis they found evidence of the next generation: homo erectus. Some of the fossils date to just 17,000 years ago, suggesting that Olduvai Gorge has been continually occupied for almost 2 million years.

What is homo habilis?

Pay attention because this is where it gets a little complicated and scientific.

Evolution was a slow one. Humans are part of hominini but it took almost the entire 6 million years for us to take our current shape.

Homo habilis came into existence a little later (as proven by Oldupai Gorge). This species had a larger brain capacity and was smarter than its ancestors. It had an omnivorous diet and used stones to kill and skin animals. Complex social structures emerged, similar to those we have today.

Before the Olduvai Gorge discoveries the standard theory suggested we had a linear ancestry, with each hominin species evolving directly from the next.

Fossils at Olduvai Gorge proved that there were competing hominin species. None of the others have survived. Humans evolved from homo habilis and ended up taking over the world (was that a good thing?!).

Homo habilis evolved into homo erectus and this species started to venture beyond Africa 1.8 million years ago, using its ability to walk on two legs. Finally came us, homo sapiens, who evolved around 300,000 years ago.

What exactly did they find at Olduvai Gorge? 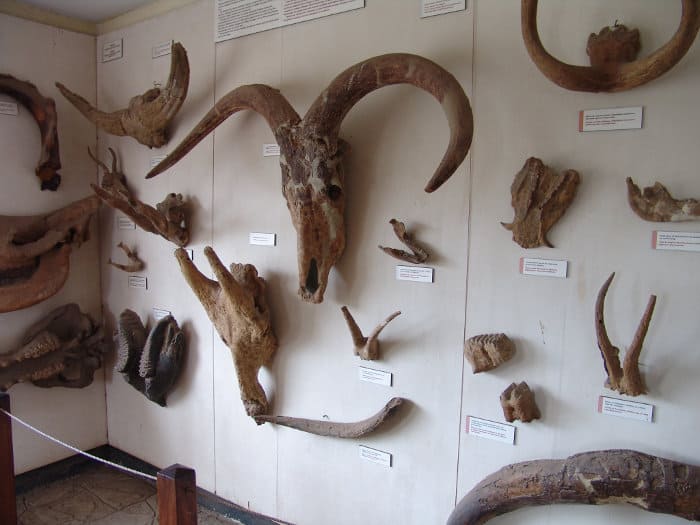 Mary and Louis Leakey dedicated their lives to researching Olduvai Gorge. In the 1960s their sons Jonathan and Richard were also involved, along with entire teams of diggers.

In 1959 they found bone fragments to put together a hominin skull that was 1.75 million years old. It was a different shape to any other hominin skull unearthed and provided the first concrete evidence for the theory that humans exclusively evolved in Africa (more on this later).

Next they unearthed enough fossils to piece together a hominin skeleton. They called it homo habilis, which translates as handy man.

In 1968 they discovered a skull that was nicknamed Twiggy, after the famous 1960s UK model. Among their other finds were countless tools and teeth.

In 1976 they even uncovered human footprints that had been preserved in ash, proving that hominini walked on two legs some 3.7 million years ago.

Not all the scientific world believed their theories until 1986. This was when a new team of archaeologists found 302 teeth and bones. Piecing them together they built a full skeleton, providing a missing link in the evolution between humans and chimpanzees.

This is a very brief overview of course. For the full story visit the Archaeological Museum at Olduvai Gorge, where you can easily track the discoveries and how they changed our understanding of human evolution.

What are they doing at Olduvai Gorge today?

Teams of palaeoanthropologists are still working at Olduvai Gorge. You can look around – but not in! – the excavation sites and can sometimes see people hard at work, chiseling away at the sun-baked earth.

A Guide to Visiting Olduvai Gorge 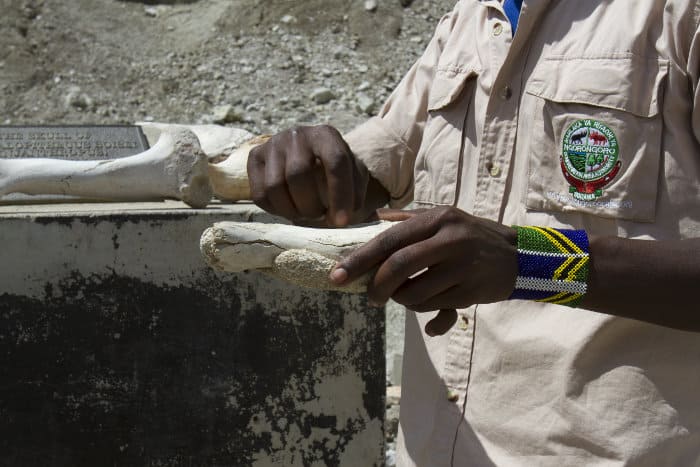 Olduvai Gorge is a stunning place to reflect on life. Standing there, overlooking the gorge, provides an intimate connection with your true nature. It’s like touching the roots of your own family tree.

Getting to the gorge

Olduvai is best visited as part of a northern circuit Tanzania safari. The most common itinerary is to visit the gorge on route between Ngorongoro Crater and the Serengeti.

This provides a brief break from the animals and is well worth a short detour. Ideally you want to safari on the Ngorongoro Crater floor in the morning then visit Olduvai in the afternoon. After the museum and excavation sites continue into the Serengeti, just as the predators are emerging from their mid-afternoon slumber.

It’s difficult and expensive to visit Olduvai without a safari. You would still have to pay the Ngorongoro Conservation Area permit and will need a four-wheel drive vehicle with a driver. 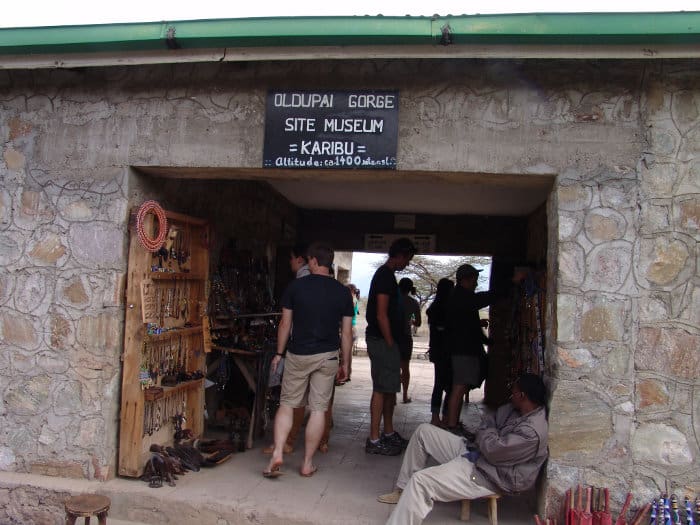 It all starts to make sense when you’re at the museum. The first museum was made by Mary Leakey herself in the 1970s. This was renovated in the 1990s. A brand new museum opened in January 2018.

The museum is filled with artifacts, drawings and photographs. Some of these are our human ancestors and are 2.1 million years old!

This new museum is a huge improvement on the earlier versions. It is carefully planned out with different rooms guiding the story through human evolution. Some of the artifacts don’t look impressive at first glance but they take on a whole new meaning when you understand their history. 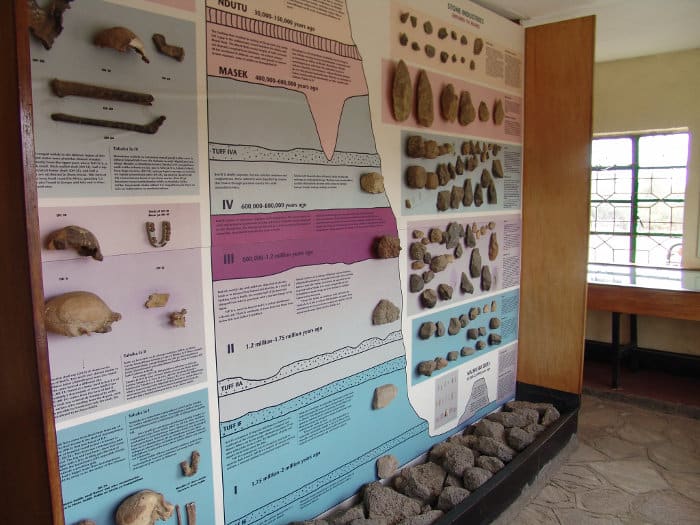 All the museum displays are in English. Most fascinating is the replica of Lucy, the oldest skeleton ever discovered. Another is the Laetoli footprints, where you can literally walk in the footprints of earliest man.

Through the exhibits you can piece together how the findings changed our understanding of human evolution. For example, molar teeth indicated a change in diet while ancient wildebeest bones suggest that these early humans had become systematic hunters.

Local academic guides lead tours of the museum and their stories contribute to the written information. Tours can go a little fast so ask the guide to slow down if you need to. Some of the guides have very strong accents and their English isn’t perfect. Again, ask them to repeat things or get your own safari guide to step in if necessary.

Gazing upon the gorge

They’ve just finished a new section of amphitheater-like seating for looking over the gorge and the place where all these fossils were uncovered. It has a beautiful view and is a good place to reflect on life as you may know it.

Visit early in the morning or late in the afternoon and the guide may narrate the evolutionary story from the amphitheater, rather than just in the museum. Otherwise this is a good place to eat a packed safari lunch.

Exploring the excavation sites shows how hard it was to work here. Every piece of earth had to be dug out by hand, thimble piece by thimble piece.

Of course you can’t jump into the gorge and start putting your hands through the dirt. Watching people digging in the sun only adds to the affect. When walking around it’s common to encounter giraffe, wildebeest, and Masai herding their goats.

How long do you need at Olduvai Gorge?

Most people should allow two hours. To save time and maximise the safari consider taking your lunch here, while listening to the guide explain what has been discovered.

Two hours is nothing in the history of human evolution. The 60 different hominini remains tell a story of over 2 million years of human history, connecting homo habilis all the way to Neanderthal man. 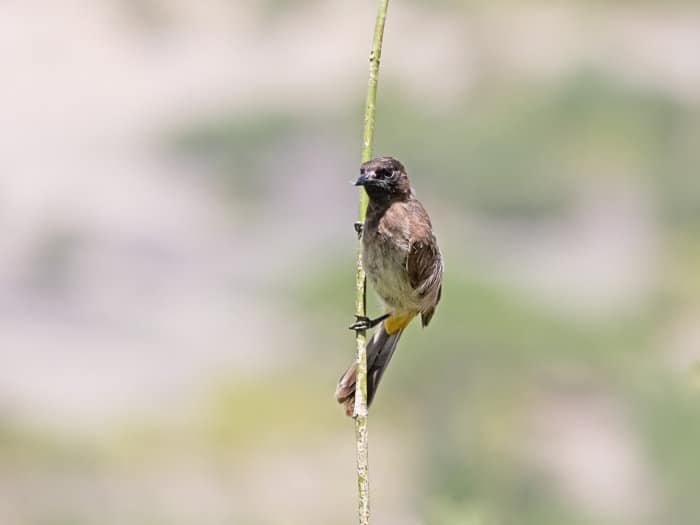 That’s easy. First read our complete guide to Tanzania safaris and insert Oldupai Gorge in between Ngorongoro and Serengeti.

And don’t believe that a Olduvai Gorge visit is only for people really interested in archaeology and human evolution. This isn’t a place for the purists, it’s a place that everybody should visit once in their life. 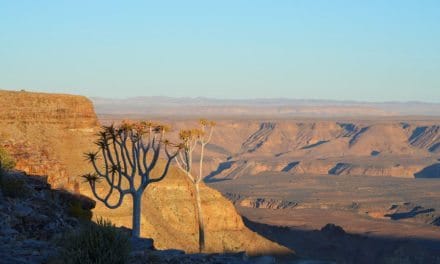 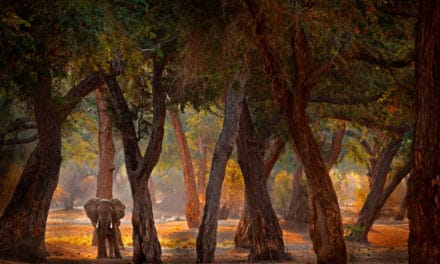 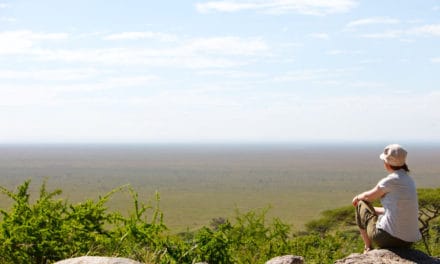 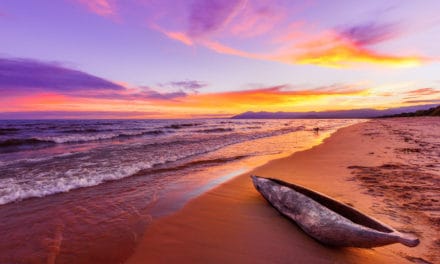