Giraffes are whopping four to six metres in height, that’s taller than a double-decker bus!

Can you imagine walking with a giraffe towering over you? Scary, right? But the world’s tallest mammal is not to be feared as these are the gentle giants of Africa. But how tall are giraffes and how do they get so tall?

Have you ever pondered the science behind a giraffe’s height and the evolution of its elongated neck? Where did that lanky neck come from? Why do no other African animals have this ridiculously long neck? Let’s find out!

A giraffe neck is 3 metres long! 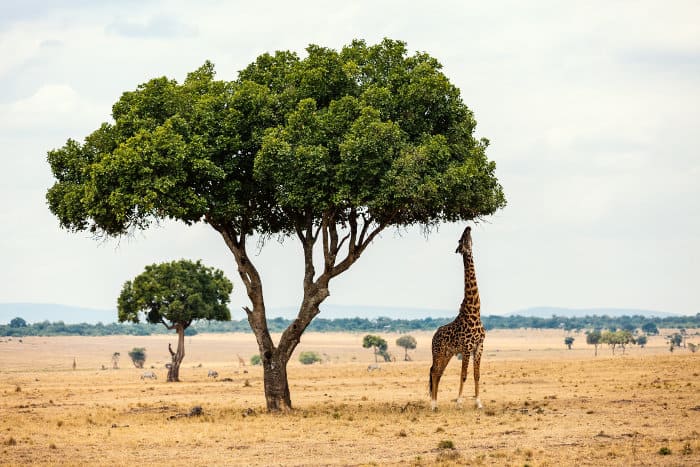 A giraffe’s neck can reach almost 3 metres in length. How absurd is that? Giraffes are the only surviving mammals to have evolved a neck as long as this, with their closest relative being the okapi.

The okapi has a similar body shape as a giraffe and a slightly longer neck than a horse, but the resemblance of the neck doesn’t come close to a giraffe. It’s not even close.

The giraffe’s closest relatives are members of the sauropod dinosaur family from the Jurassic period – these friendly sauropod dinosaurs had super long necks reaching an enormous 9 metres in length!

The funniest fact ever about a giraffe’s height

Did you know a giraffe’s neck is too short to reach the ground? That’s right, the tallest mammal to walk the planet today is struggling to quench its thirst at the watering hole.

They must spread their legs in a v-shape just so they can drink. Luckily for giraffe, they only need to drink water every few days as they absorb most of their moisture through the plants they eat.

How tall are giraffes? 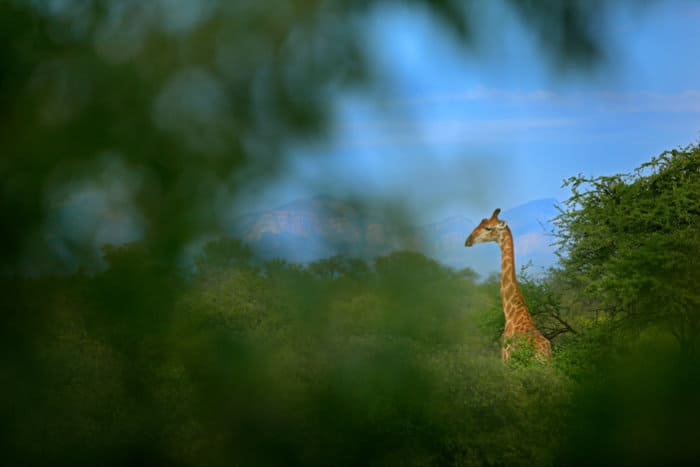 These gigantic animals measure four to six metres in height. But are all giraffes the same height? Absolutely not!

There are four distinct giraffe species and each is a different height: Masai Giraffe, Northern Giraffe, Reticulated Giraffe and Southern Giraffe.

The Masai giraffe is the largest of them all, with record heights of 5.9 metres for males. Female giraffe aren’t far behind in this particular species, growing as tall as 4-5.4 metres. Woah! Towers of Masai giraffe are found living in the east of Africa such as Tanzania and central and Southern Kenya.

Northern giraffe is native to, yep, you guessed it, North Africa. What gave it away? They are usually found living in Southwest Ethiopia and southern Sudan. The Northern giraffe has reached record heights of 5.7 metres, only marginally shorter than its Masai counterpart.

This unique species is also known as the three-horned giraffe as in some subspecies, males grow a second pair of ossicones. These sit behind the first pair and is a key feature which further divides giraffe into different species.

How tall are baby giraffes?

After a long 15 month gestation period, a baby giraffe finally arrives into the world with a rude awakening – dropping two metres to the ground and landing on its head. Welcome to Africa baby giraffe!

Why are giraffes so tall? 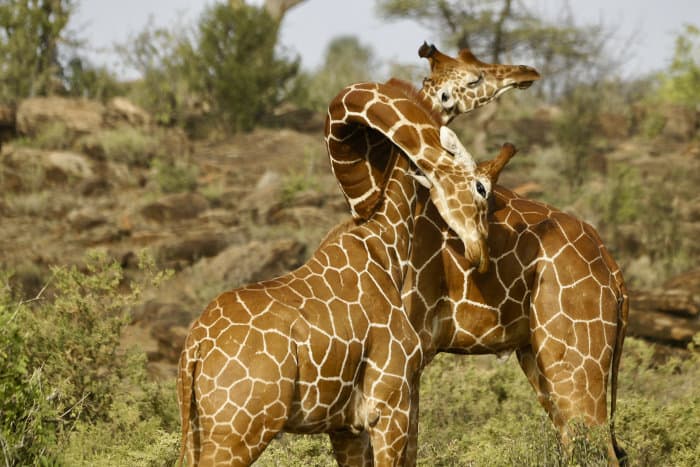 The longest neck in the animal kingdom only has seven vertebrae. This is the same number of neck bones as humans. The difference is that a giraffe’s neck vertebrae are much much longer than ours.

Scientists have stuck their necks out with a couple of evolution theories. The okapi has similar genes as the giraffe, although lacks a giraffe’s lanky features. Somewhere down the evolutionary path, 11 to 12 million years ago, they branched off into different directions and the okapi actually looks more like a zebra now.

Most theories argue that giraffe evolved so they could reach less accessible food sources. The long neck evolved as it allows them to reach treetop canopies where its competition cannot go. This resulted in its fore-legs becoming longer, as well its hind legs and its neck lengthening tremendously over time.

A second theory suggests giraffes are so tall because they need their neck for combat. Male giraffes fight for females by ‘necking’, which is a pretty vicious act. A giraffe’s neck is its most powerful weapon on the African savanna and the more dominant male giraffe will win the female hoof.

How are giraffes so tall?

Giraffe have a rough time at the watering hole and when reaching the ground they are at their most vulnerable. However, the giraffe did get lucky with its long neck.

The giraffe’s height helps them keep a lookout for any brave potential predators skulking across the dry grasslands of Africa. Good luck trying to take down an alert giraffe, as one powerful kick from its long legs can easily end another animal’s life.

Giraffe have a huge advantage over other herbivores when it comes to browsing for food. In the wild, giraffes stretch their elongated necks beyond its competition. Even elephants can’t reach as high in the trees. This creates the luxury of being able to reach the sweetest leaves (acacias are a favourite) on the tallest trees, which provide the most nutrients in a giraffe’s vegetarian diet.

Giraffe are the only mammal that can feed from the top of trees on the African savannah, so they don’t need to compete with others for food. 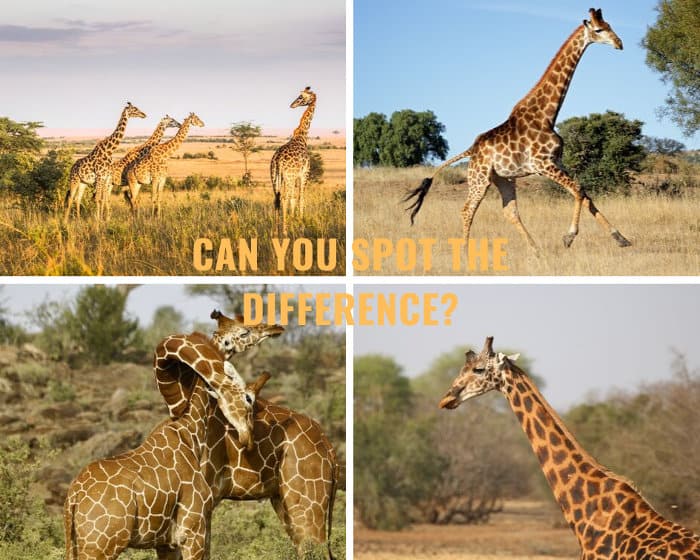 Differences in species are not only recognised by height, but also by their coats. Every giraffe wears an individual print unique to them, just like our fingerprints are unique to us. No two giraffes are ever the same. However, it is possible to identify a species in the colouring of the coat or pelt.

The reticulated giraffe has rich orange-brown patches defined by thin, white channels running between them, whereas the Masai giraffe is covered in large jagged leaf-shaped patches surrounded by a more creamy-brown outline.

The Southern giraffe poses with various shades of brown and irregular, star-shaped patches. Its coat is broken up by lighter shades of tan and almost cream shaded lines. The Northern giraffe struts its stuff with larger rectangular patches, surrounded by an off-white creamy colour and a more recognisable tan colour overall.

It’s sad to know that the great giraffe is vulnerable to extinction in the wild. Giraffe are now extinct in eight African countries where they used to live, including Guinea and Mali. They are facing a high risk of extinction due to habitat loss and poaching.

There are many conservation groups raising awareness. The Giraffe Conservation Foundation is helping protect giraffe environments to provide a sustainable future for these stupendous creatures.

The African Wildlife Foundation is another organisation that educates local communities on how to continue with their agriculture in a sustainable way without effecting giraffes, which is amazing support!

The savannah is drier than ever and foundations continue to plant Acacia trees (giraffes favourite shrubbery) to replenish regions that were once full of striding giraffe.

We do not wish to see the disappearance of another harmless and substantial animal on the African savannah. It wouldn’t quite be wild Africa without the loping giraffe, would it? 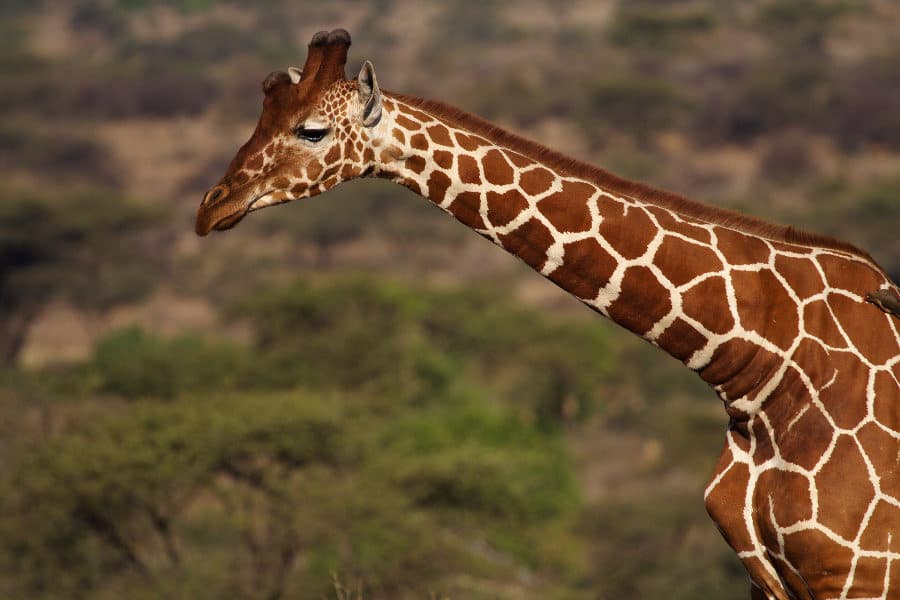