You have probably seen an okapi and thought it was a horse with zebra legs. It does look like a funny horse and zebra experiment went wrong.

However, the okapi is a distinct creature in its own right and isn’t any sort of “zorse”. Known as an African unicorn, it’s a magnificent yet elusive animal that doesn’t usually roam the open savannas.

Add to that the fact that their population is decreasing and you’ll quickly realize it’s not easy spotting this guy. With this in mind, seeing the mysterious animal is an incredibly rewarding experience.

Read further to get your dose of okapi facts and what makes one of Africa’s weirdest animals so fascinating.

No, They Aren’t Related to Zebras 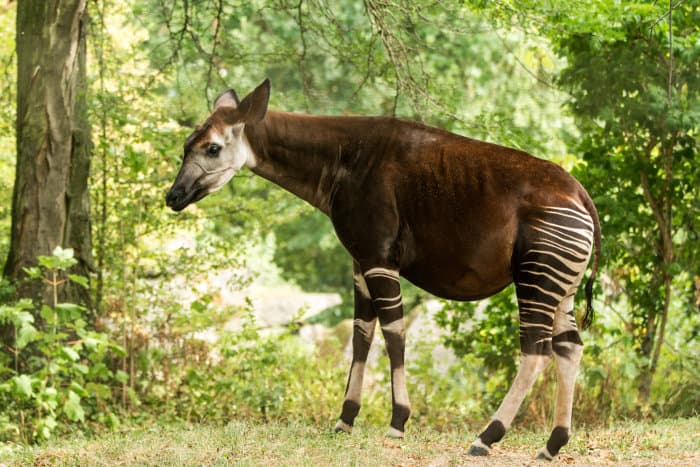 Despite donning zebra stripes on their legs, the okapi isn’t related to the zebra at all. Nor is it related to horses, deer, or most animals you may be thinking of.

In fact, this animal is the only living relative of the giraffe and as such got the nickname the “forest giraffe”. They share a common ancestor and have evolved over millions of years into what they look like today.

Living in the forest, okapis developed a shorter stature fit for their habitat. Just imagine a giraffe trying to bob and weave its way through the forest while avoiding tree branches, trunks, and roots.

Where Do Okapis Live?

Okapis are endemic to the Democratic Republic of Congo and you’ll find them deep in the country’s tropical rainforests. Unlike most of Africa’s wild animals, they are rarely found in open plain savannas.

However, you can see this elusive animal at a number of zoos around the world.

What Do Okapis Eat? 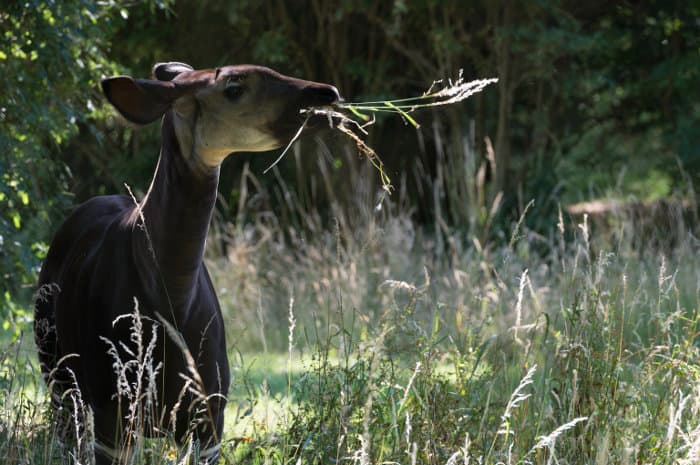 The okapi is a herbivore, meaning it feasts on various leaves, grasses, fruits, and some fungi. They eat an astonishing 18 to 29 kilograms worth of food daily — humans eat 2 kg daily for comparison! Certain clay also makes up part of their diet, they consume them for essential nutrients.

Okapis are part of a unique group of animals known as ruminants, this means their stomach has four compartments. This allows them to eat a lot in a short period of time.

The okapi, despite being the giraffe’s relative, is a medium-sized animal that mostly grows to a height of 1.7-meters and weighs 350 kilograms at most. It has a reddish-and-black coat that’s soft to the touch. It’s also oily which helps it stay dry in the rainforest.

Proving their shared ancestry, both an okapi and a giraffe’s tongues are long and purple. In addition to pulling down branches when eating, okapis use their tongues for grooming purposes. Okapis also have large ears and cloven hooves.

Male okapis have small, short skin-covered horns that they often use as an aid to settle territorial bouts. The horns have a backward slant, helping avoid any entanglement with tree branches.

They Can Lick Their Own Ears! 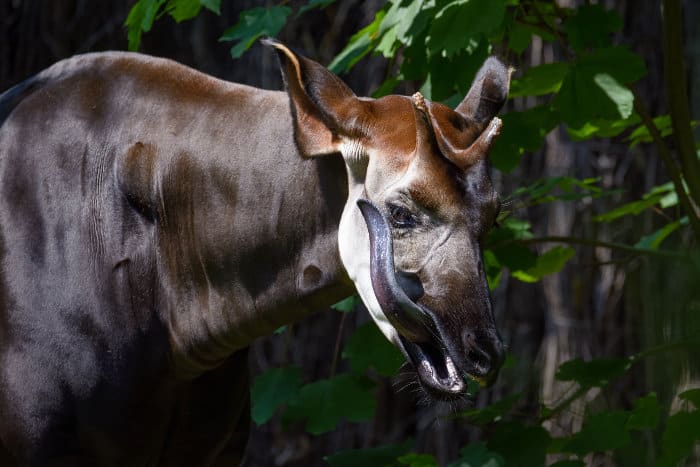 Be honest, you have (probably) tried (and failed) to lick your own nose. For okapis, that’s an easy feat!

They can use their long tongue to lick their own ears if they want to. Their lengthy tongue is also a handy tool for swatting away at annoying insects.

Okapi Behavior: How Do They Live?

The elusive and shy okapi is a solitary animal in nature, often seen moving alone. However, the exception occurs with mother and calf, who usually travel as a pair. The okapi stripes help the young follow their mothers, particularly in a dark forest.

Despite their solitude, their home ranges will normally overlap. They communicate their presence with other okapis using the scent glands on their feet, leaving a sticky substance in their trails. Males use urine to mark their territory and other okapis will easily recognize the distinct odour thanks to their keen sense of smell.

A female okapi is normally allowed to pass through the marked territory, however, a male treading on another okapi’s territory is a massive no-no. In a fight between two okapis, the victor walks away with its head held up high — literally. 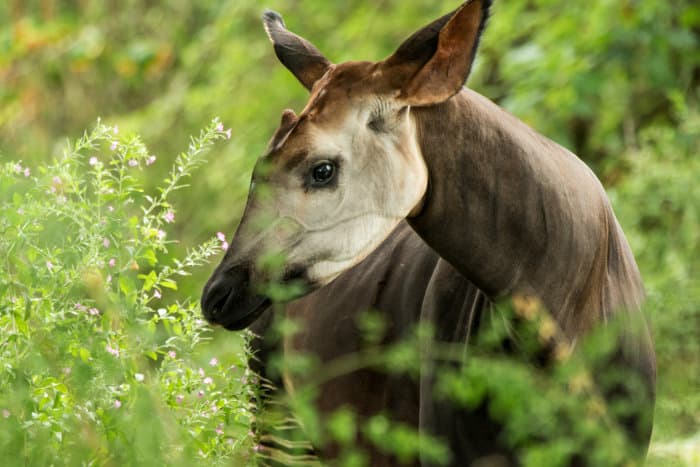 The main animal that preys on okapis is the leopard, one of Africa’s top predators. In addition to leopards, okapis have to constantly be on the lookout for other wild cats that prey on them, including servals and African golden cats.

However, okapis are pretty decent at evading their predators. They use their coat to hide in plain sight by camouflaging themselves in the deep forest.

The okapi’s large ears catch even the slightest of sounds so they know when trouble is approaching. They can even rotate their ears independently to help them listen to sound behind and in front of them!

Even if the predators find the okapi, it still has a chance of escaping thanks to its ability to reach a top speed of around 59 km/h.

They “Speak” a Secret Language

Okapis communicate using a secret language that includes whistles, bleats, and coughs. Mothers have an even more private way to contact their offspring without alerting nearby predators. They do so using a call that’s around 14 Hz, which humans and predators alike cannot hear. 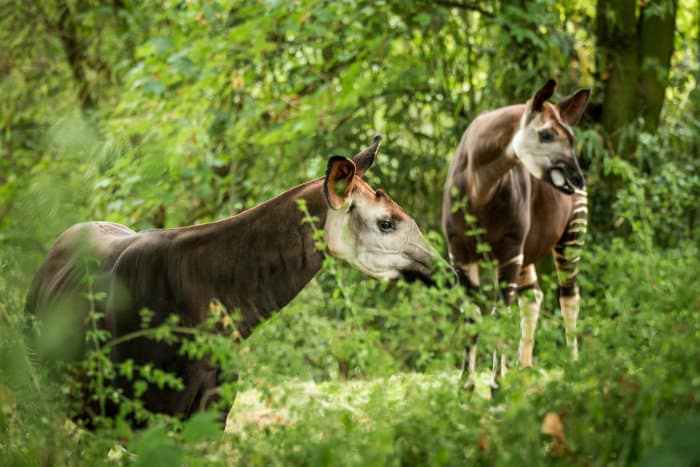 According to the IUCN Red List, the okapi is an endangered animal. Their population has been in steady decline for the last few decades. Experts estimate that there are only 10,000 to 35,000 okapis left in the wild.

The okapi’s endangered status is due to several reasons. The leading ones being deforestation and getting hunted for meat and their velvety soft skin.

The okapi is an elusive animal that for the most part remains a mystery that fascinates the human world. They resemble a horse and zebra mix, despite being relatives of giraffes who have their own distinct characteristics.

Hopefully this article has shared some facts that have made them even more interesting to you.

While they are scarce, you can get a chance of seeing them up close and personal when you visit the Okapi Wildlife Reserve. You could be one of the few to actually see the African unicorn!