The kori bustard is quite the mystery. You might be asking, ‘what is the heaviest flying bird in Africa?’. Unfortunately, in your search for answers, you’re likely to come across uncertain statements like “arguably the largest” and “may be the heaviest.”

So, to clear that up for you, it is, in fact, the heaviest flying bird in Africa. It is not, however, the largest. That title goes to the ostrich.

Because kori bustards are very big birds, life is a little harder for them than most of their winged cousins. They make for a nutritious meal and struggle to fly away from their many predators. Fortunately for the species, they do have robust (and interesting) mating methods.

Keep reading to find out more about what makes the kori bustard so fascinating.

The Kori Bustard Weighs Up to 18 kg 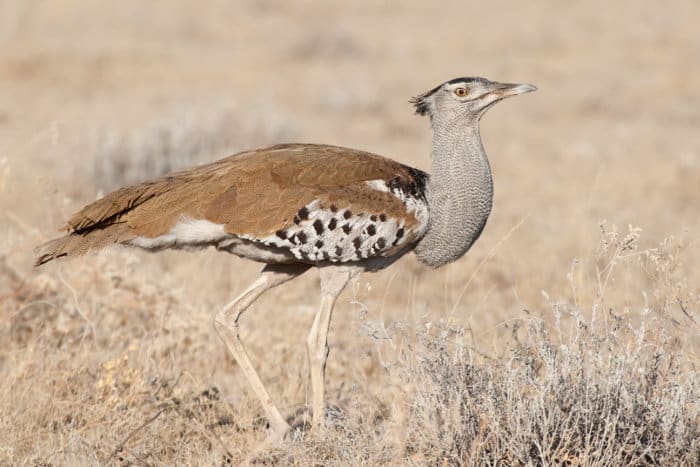 This heavy bird has a surprising weight range. The females, considerably smaller than the males, weigh between 4.8 and 6.1 kg on average. The full range of their weight is between 3 and 7 kg.

Males, on the other hand, can weigh anything between 7 and 18 kg. Their average weight is approximately 11 kg. So if you spot a particularly large kori bustard, the odds are that it is male.

This variable is also determined by the area in which the bird finds itself. Depending on the area and the food available, the bird can reach quite different weights. This is for the same reason that your mom told you to eat your vegetables while growing up. Better nutrition makes for bigger birds.

The kori bustard has a very impressive wingspan. The male bird has a wingspan of 230 to 275 cm. The female, considerably smaller, spans 80 cm across its wings on average.

This lengthy spread of their wings is necessary to get their massive bodies into the sky. If the kori bustard didn’t have wings large and strong enough to lift itself, it would be like the flightless birds which can only roam the earth.

Not Quite the Biggest Bird in the World

While the kori bustard is a hefty creature, it’s far from being the biggest bird in the world. The ostrich can weigh over 156 kg. Which is more than 2 average humans, if that helps.

The ostrich cannot take the title of the largest flying bird, as it is unfortunately consigned to the earth (though ostriches are very fast). Due to its heavy weight, it would require huge wings to be airborne.

So the kori bustard, while not the biggest bird alive, is the largest bird with the power of flight.

The Kori Bustard Bird is Omnivorous

To get to such a hefty weight, the diet of a kori bustard must be quite substantial. They are omnivorous and therefore eat both vegetation and flesh. When fully grown, they eat insects, lizards, and snakes for protein. While they are chicks, their diet consists mostly of insects.

Their diet also consists of wild berries and the gum of the acacia tree. It’s not quite clear whether they consume the gum directly or through their insect food.

While these large creatures are rather shy, behavior varies from bird to bird. They crouch or run at the first sight of danger, for which they are always on the lookout. Because flying is not the easiest thing for them, they are more likely to run away when threatened.

If they don’t succeed with an on-foot getaway, they take to the air with heavy, slow wingbeats. This is not the easiest thing to do, and they do avoid flying when possible. However, once in the air, they steady out and have an easier time of it.

Kori bustards don’t fly for long and will land soon after taking flight. Normally, within sight of their launch. They also keep low to the ground when flying.

The kori bustard is part of the Ardeotis genus. There are four species within this family. Each is slightly different from the other, as they evolved according to their environment.

Besides the kori bustard, there is the Arabian bustard, which lives across southwestern Arabia and the Sahel region of Africa. They weigh between 4.5 and 11 kg and are therefore quite large, yet smaller than the kori.

Then there is the Great Indian bustard. You can find them in India and Pakistan. They are more endangered than the other bustard species because of a lack of protection and rampant hunting.

Lastly, comes the Australian bustard. As suggested by its name, you can encounter this bird all across Australia and southern New Guinea.

They Have Interesting Interactions 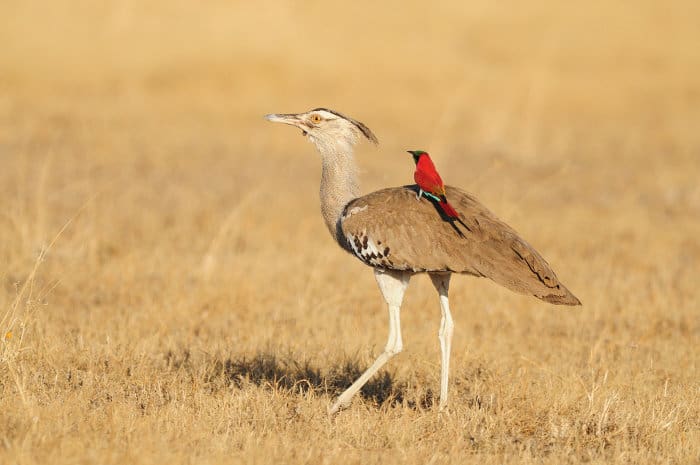 The kori bustard is often found striding amongst game, such as antelope and blue wildebeest. They feed on the insects and small mammals that get disturbed by the movement of these larger mammals.

Kori bustards similarly help other animals. Carmine bee-eaters ride on their back and take full advantage of how the kori bustards stride through the grass. Insects get dislodged from their grassy perches and are quickly picked up by these opportunistic birds.

When threatened, the kori makes barking sounds to intimidate their potential attackers. They can also growl when their young are endangered.

This bird’s everyday calls are a little harder to express in words. They make a sound similar to the tapping of a mallet against wood. And one could describe their mating call as a whooping sound.

Whatever sound it is that they’re making, it’s certainly intriguing.

The Kori Bustard Has Many Predators 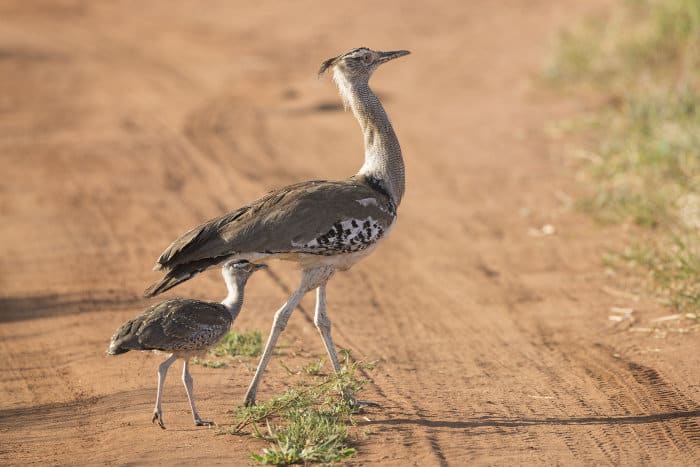 Since the kori bustard is largely a ground-dwelling bird, its defenses are weak. And because they are so big and therefore meaty and desirable, their predators are numerous.

Their unfortunately long list of predators comprises some of Africa’s most formidable creatures. This includes leopards, lions, cheetahs, caracals, hyenas, and even eagles.

Chicks are, by far, the most vulnerable to predators. Even though they’re cleverly camouflaged and carefully taken care of, they are regularly picked off by leopards and jackals during the night. About 82% of the hatched young don’t make it past their first year.

Bustards breeding habits are rather fascinating. They engage in lek mating, which means that the males gather to compete for a female’s interest. They will assemble during the mornings and evenings in specific display areas.

Then, to attract a couple of females (because they mate with multiple females), they will enact an elaborate and impressive courtship dance. If one male is a particularly wonderful dancer, the other males will not display near him. Instead, they’ll move away and try their luck elsewhere. 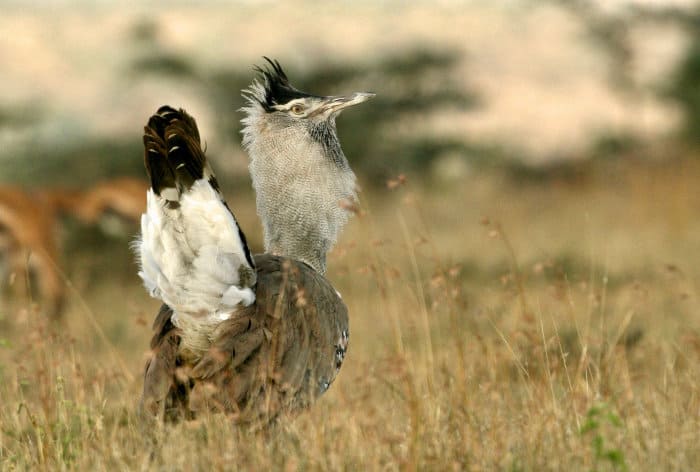 Physical altercations between adult males are common during mating season. They mainly get upset over the competition about display areas and for the right to breed.

The competitors will crash into one another’s bodies and peck at each other viciously. If things get serious, they will push against each other, chest to chest with their tails erect and bills locked. This can continue for up to 30 minutes.

Female kori bustards, like the rest of the bustard family, don’t make a proper nest. Rather, they dig out a shallow hollow in which to lay their eggs. This rough sort of nest will be within 4 m of a tree, shrub, or anthill. Anything to give them a little cover and protection from the elements.

The hollow is small enough for the female to cover it fully. There are generally two eggs laid in it. The female rarely leaves her nest, even to drink or feed. You won’t find the male anywhere near during the incubation period.

Spot the Kori Bustard in its Natural Habitat 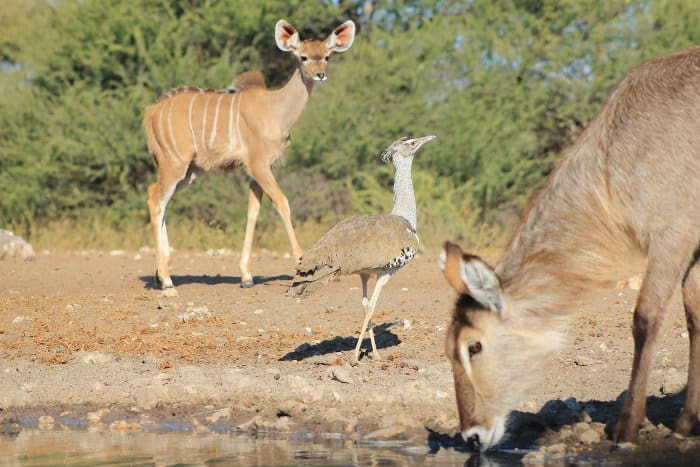 The kori bustard is the heaviest flying bird and a fascinating creature. It’s large and gangly looking, particularly when in flight. Nevertheless, because of its size, it has a subsequent physical authority which is impressive to witness.

They are near threatened, although still quite common in the wild. So if you want to watch these wonderful birds in person, book a tailor-made African safari. You might even get a chance to watch their elaborate courtship dance, which is certainly a sight to behold.