Due to its immense speed and mystical appearance, the cheetah is easily distinguished from its contemporaries.

Almost everyone knows of this fleet-footed feline. It truly is one of a kind. But how many cheetah facts do you know?

This is all common knowledge but, what do we learn about this magnificent beast when we dig a little deeper? Can the cheetah climb trees? Can cheetahs retract their claws?

Let’s take a look at some of the more surprising cheetah facts. 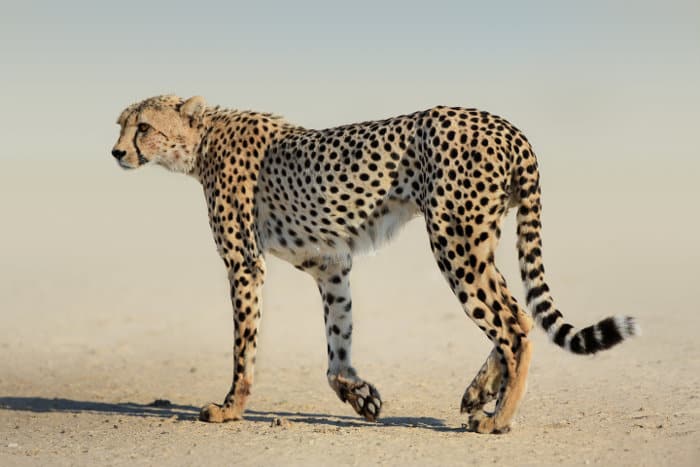 Although less physically imposing than a lion, a larger-than-life cheetah weighs in at a mildly unimpressive 60-70 kg. When you consider that this is equivalent to that of an average female human, it doesn’t quite strike fear into the heart.

Factor in a height of 90 cm from the ground to shoulder and the cheetah does not cast the biggest shadow over the African savanna.

But cheetahs do stand taller than leopards. Their long slender bodies are clearly distinct from a leopard’s shorter, more robust frame.

Although you may think cheetahs lack in height, weight, and overall girth, they have enough fur to feature 2000 spots! And the cheetah compensates for any shortcomings through sheer speed and velocity.

No other land mammal can cross the ground faster.

We all know that the cheetah is fast but do you know just how fast?

If a cheetah got spotted hurtling down the fast lane of a motorway in Europe it would get pulled over for speeding.

The cheetah is a miraculously compact creation of fast-twitch fibers that virtually glides across the ground.

It can maintain a top speed for around half a kilometer. This is less than the distance needed to reach a meaty meal from its place of hiding.

In any African Animal Olympics, the cheetah would take home the gold in both the 100 m and 200 m sprints, making it the Usain Bolt of the African plains.

The cheetah may not be the fastest animal in the world, but it is the fastest land animal. Read the complete story on how fast is a cheetah in this detailed article.

3. Cheetah Paws Trip Up Their Victims

The cheetah is smaller and less powerful than lions prowling the plains. But when sprinting at such incredible speeds, it doesn’t need to be strong. How?

The cheetah knows that if it collides with a hapless wildebeest or gazelle, the momentum will knock the wind out of the animal’s lungs and send it crashing to the ground.

However, it’s highly unlikely a cheetah can sprint up unannounced on a victim. Instead, it must use this incredible speed to chase down prey.

Leopards and crocodiles use vice-like jaws to kill their quarry. Cheetahs are simply not as strong. A leopard can kill you in a single bite whereas a cheetah can only break one or two of your bones.

Instead of brute strength, cheetahs extend a paw and trip up their prey. This high-speed maneuver causes prey to fall disorientated onto the savanna. Only then does the cheetah complete the kill by biting down on the neck. 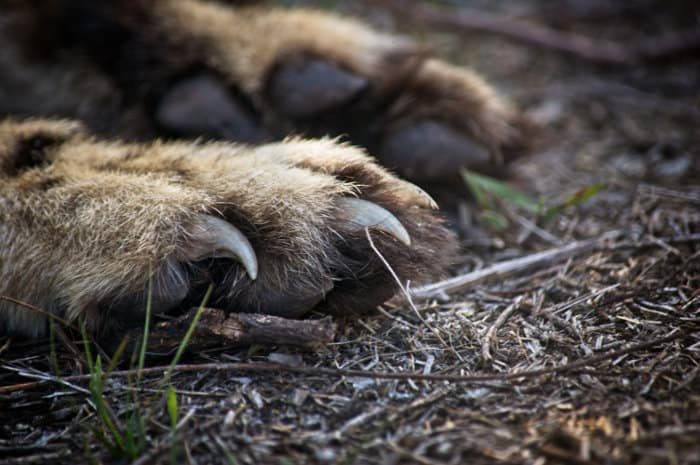 The cheetah bears a strong resemblance to the larger and smaller cats within its extended family. This includes its short, spongy coat, an elongated skull, and a long flowing tail used for balance.

A cheetah uses its aerodynamic physique to great effect when jumping and striding but what else makes the cheetah different from other cats?

Do cheetahs have retractable claws? The simple answer is no. The cheetah is the only member of the cat family that doesn’t possess the capability to retract its claws.

So, why can’t cheetahs retract their claws? Without these top-of-the-range stabilizers, the cheetah would fall flat on its face before getting anywhere close to maximum speeds.

Its claws are always seen partially or fully exposed. This trait alone serves as a reminder that the cheetah is not an animal with which you should trifle.

Imagine a samurai who never sheathed his sword. You’d feel more than a little anxious and apprehensive in his proximity.

Cheetah paws are less rounded in comparison to other cats. This along with the claws helps the cheetah make quick turns at high speed. The cheetah uses its thumb claw to hook and trip prey during the chase.

Not only a tool for an attack, but cheetah claws are also essential for gripping various kinds of terrain. Its claws prevent its paws from slipping on sandy or slick ground below. 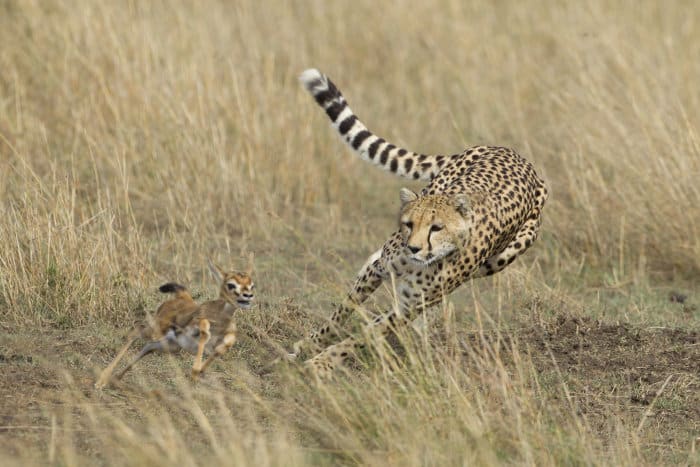 Without such a long tail the cheetah would never reach top speed without falling over. So here’s another cheetah fact for your African savanna safari – if you’re not sure if it’s a leopard or a cheetah, look out for the length of the tail.

As the best rugby wingers in the world clearly show, the aptitude to change direction and run at angles can often defeat pure speed.

Not to be outdone or outrun by the prey it wishes to pursue, the cheetah depends upon its long, flowing tail to act as a rudder.

This 80 cm tail wing cuts through the air when not needed but can suddenly increase drag to allow a rapid change of direction. 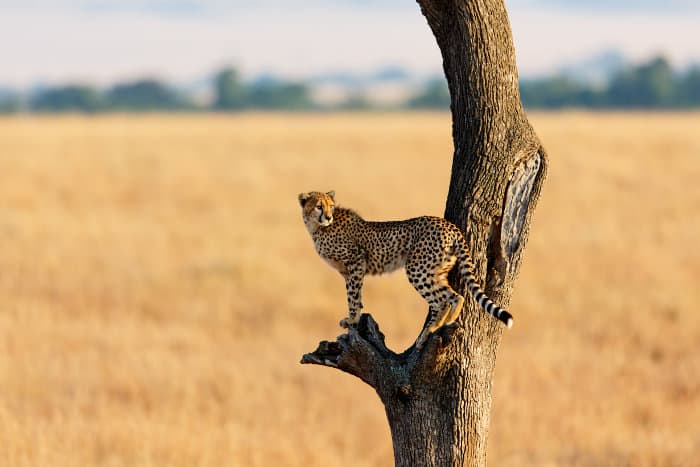 Almost all cats climb trees, however, can a cheetah climb a tree?

Leopards drag huge carcasses up trees for safekeeping. African wildcats are not against taking a nap in a tree. Even lions climb trees, a phenomenon you can witness in Lake Manyara National Park on a Tanzania safari.

So, do cheetahs climb trees too?

A side-effect of the cheetah’s non-retractable claw is its relative incapacity to climb large trees. On the African savanna, animals use trees plainly for cover and not as platforms or podiums.

Ironically, though great for gripping and grinding when giving chase, the cheetah’s claws are virtually useless for scampering up or scaling any vertical objects.

Because of the unique angle at which its claws protrude from its paws, the grip needed to climb straight up would be extremely taxing and not worth the exerted effort.

Though not detrimental to a cheetah’s ability to survive, this becomes an issue when pursuing any animal wily enough to scurry up the closest trunk or branch.

The cheetah also lacks the necessary genetic ability to roar.

Lions and leopards have a two-piece hyoid bone located in their throats. It’s this that makes the roaring sound possible. But this bone is absent in the cheetah.

Instead, cheetahs communicate through purrs, growls, and hisses, which do not seem out of place coming from the throat of an intimidating, predatory cat.

However, the cheetah’s almost effeminate high-pitched chirp convinces us of its wide-ranging repertoire of speech.

8. The Cheetah is a Cautious Cat 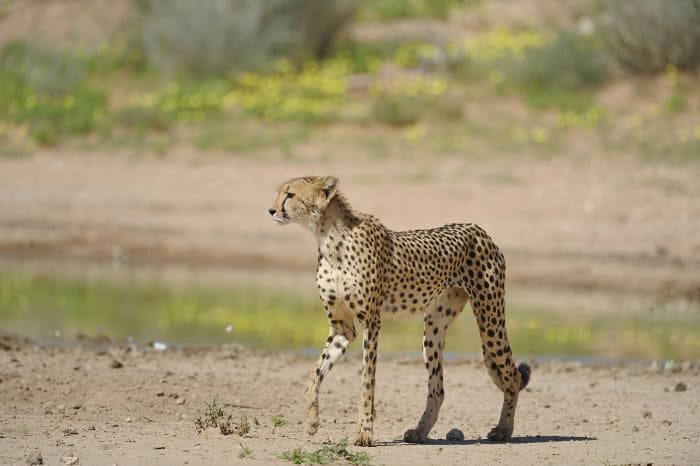 Unlike daredevil hunters on the arid savanna, the cheetah will often reconsider laying siege to large herds of animals. Neither will it try to take on an adversary larger than itself.

Self-preservation and a low threshold for physical punishment are forefronts in its thinking. Plus, as a solitary animal, the cheetah does not need to hunt large prey as lions do.

Unlike its cat cousins, the cheetah is also not a consummate scavenger.

It is rare for cheetahs to risk serious personal injury to compete for morsels of discarded meat. Preferring to pounce when no other contender is in sight, cheetahs rarely ever battle for a carcass.

Instead, they often end up losing their meal to scavengers. Accelerating to top speed requires an enormous effort.

After making a kill it takes 20 minutes for a cheetah to cool down enough to eat. During that time, hyenas and lions may steal the prey.

What do cheetahs eat? Find out in this article about the diet of the fastest land animal.

9. Cheetahs are an Endangered Species 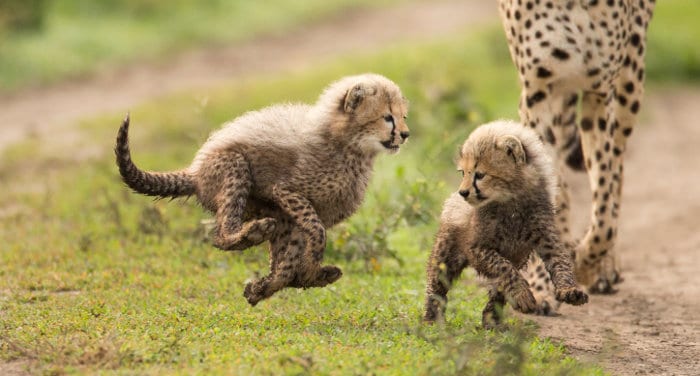 At present, global cheetah numbers have shrunk dangerously low with approximately 12,400 remaining in the wild.

Most of these majestic mammals exist in sub-Saharan Africa with a small group inhabiting Iran.

They now face a troubling array of threats to their kind, and conservation specialists view the current circumstance as critical. The key problems are:

Cheetahs have lost 91% of their historic range. These animals need space to run and hunt. They need open spaces, like the plains of Africa. Unfortunately, open plains are being replaced by agriculture.

10. How You Can Help the Cheetah 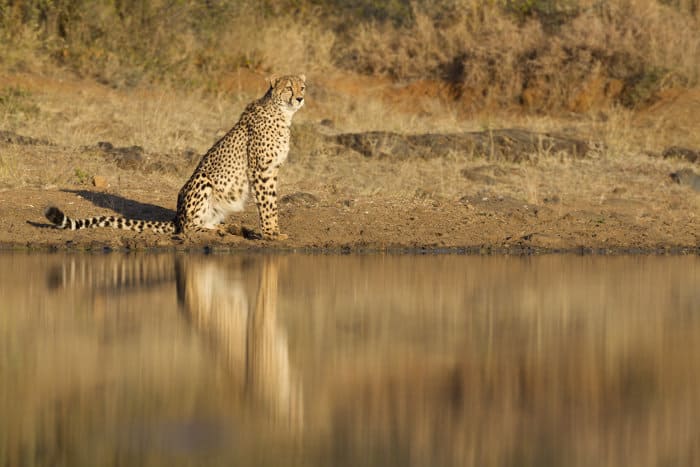 This is not the end of the cheetah story.

There are many passionate organizations doing everything they can to preserve the lives and legacies of these proud and prestigious creatures, like the cheetah conservation fund.

Are we really prepared to sit back and watch as the cheetah gets forced into an avoidable extinction?

Your attention and admiration can provide the lifeline so desperately needed.

Public interest can sustain the operations striving to keep the enchanting cheetah around long enough for future generations to meet.

As a lover of all things wonderfully wild, how about a visit to Africa to see this stunning species strutting its stuff?

Let’s share an awe-inspiring appreciation of this animal’s unrivaled speed and sharpness.

It’s clear that the cheetah is a fascinating and majestic animal. While there are all these interesting facts about cheetahs, nothing compares to seeing them in person.

Book an African safari to see these speedy animals in their natural habitats (while you still can). We’ll see you there! 😉 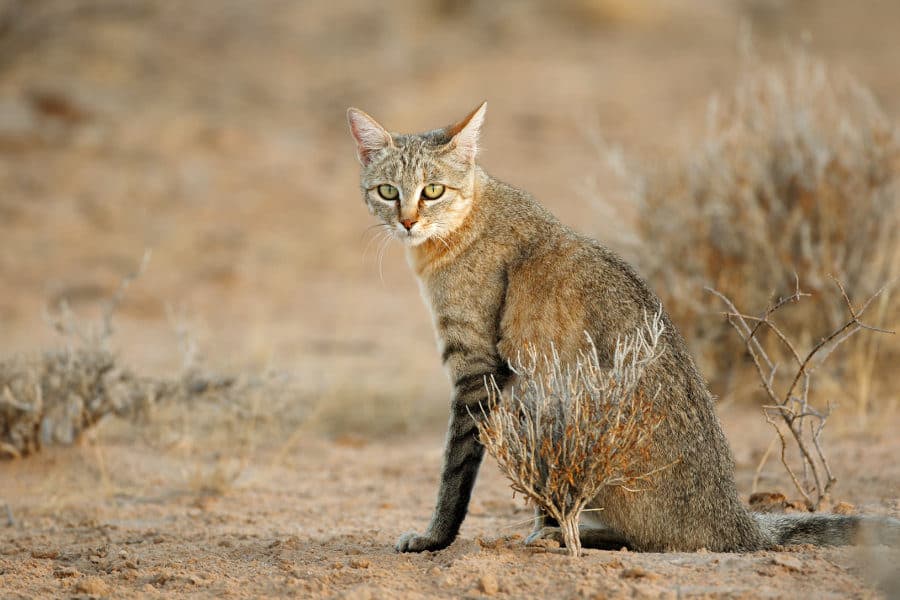