Ask “what do elephants eat”, and the answer can be almost everything on the savanna. When an elephant comes to a forest it doesn’t just pick leaves from a tree. It consumes most of the tree!

Did you know that elephants eat for 18 hours per day?

That’s nearly 80% of an elephant’s daily routine contributed towards feeding itself.

Perhaps you’re really thinking, why are peanuts not at the top of the list when it comes to an elephant’s favorite food?

Well, sorry to burst your bubble, but this is a myth which originated in the days when elephants first became an attraction.

Peanuts don’t even grow in the elephant’s habitat, so how do elephants even know whether they enjoy peanuts or not?

The sacred elephant is the largest land mammal to walk the Earth today. They are wise, intelligent and super emotional creatures that shed real tears.

In fact, there are a bunch of weird and wonderful facts, so let’s jump right in with a story on what do elephants eat.

What Does an Elephant Eat? 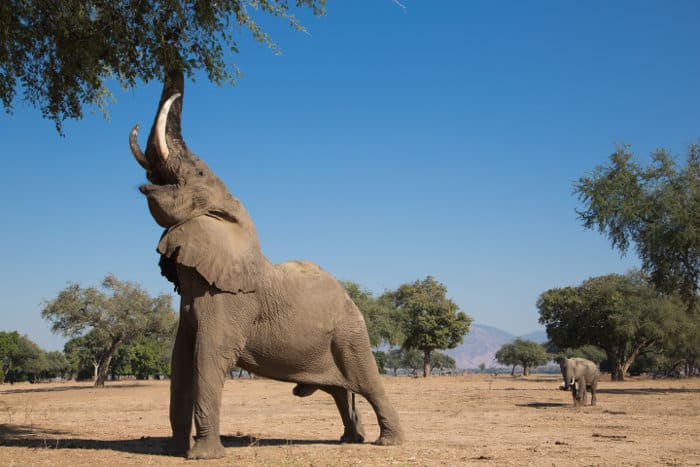 Elephants are the ultimate vegetarians. They are herbivores that live on an incredibly varied diet that changes with the seasons.

Whether they are living in the savannah or the jungle, these majestic creatures are always on the lookout for their next meal.

What do elephants eat in the savannah?

While an elephant’s favorite food varies according to each animal, grass and herbs make up the staple of their diet.

What do elephants eat in the jungle?

The lesser-known and generally smaller African forest elephant lives in the jungles of central Africa. Like their savannah-dwelling cousins, these giants can eat almost any vegetation.

Many animals are browsers or grazers. Elephants are both, taking food from the ground and the trees. In the jungle, an elephant eats more fruit. Research has found these elephants eating up to 72 different types of fruit.

It’s easy to see where elephants have been because these giants have use for almost every part of a plant.

Across Africa, you will find forest trails that appear as bulldozers created them. Decimated trees lie on their side, their trunks snapped in two. The green has gone and uprooted trees lie around.

Well, that’s because of elephants. They don’t just eat the leaves, they chew on the entire tree.

Weighing up to seven tons, you’d expect elephants to require a lot of protein. But elephants don’t eat meat. While you won’t see one munching on a wild antelope, they do unavoidably eat animal proteins – like ants, bugs, and even bird eggs.

They also enjoy different parts of plants that can provide protein. When plants are thriving in the rainy season, nutrients are at their highest, which compensates for the dry season.

What Do African Elephants Eat During a Drought? 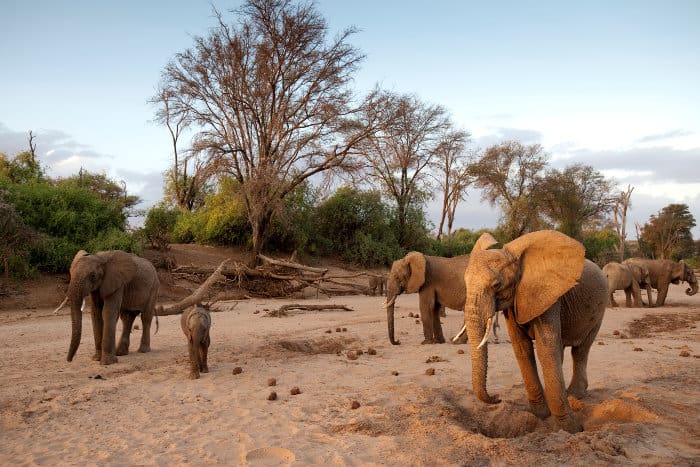 The dry seasons bring long months of droughts and tough times in Africa, even more so with climate fluctuations. What elephants eat changes along with their new environment – these animals are incredibly smart.

Elephants use their tusks to churn the ground, then dig with their trunks to create hollow caverns several meters deep. This is to obtain salts and minerals from the earth.

This is also a vital part of the savannah ecosystem for other native wildlife species. After the elephants churn up the soil other animals can also dig in and enjoy its benefits.

How Much Does an Elephant Eat in a Day? 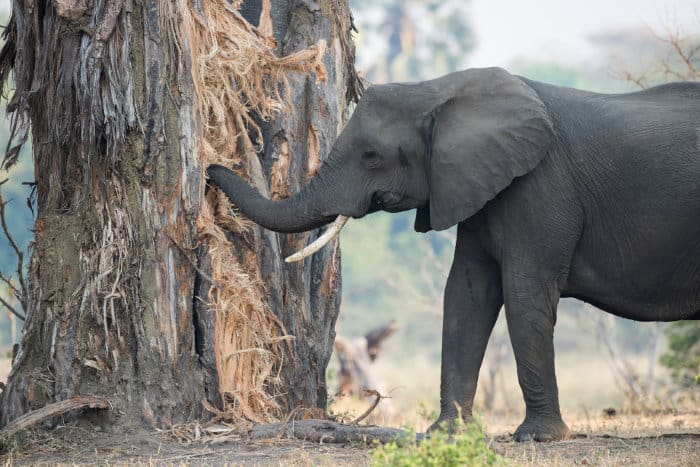 An adult African elephant consumes between 100-270 kg of food every day.

Elephants love to eat tree bark and use their curved tusks to carve into the tree and tear off strips to feed on. It looks pretty dry to us but it is one of their favorite food sources.

Tree bark helps their digestion as it contains calcium and roughage. This enables the clear passage of fruits and plants in their vegetarian-based diet. So without tree bark, an elephant can’t process 100-270 kg of food every day. 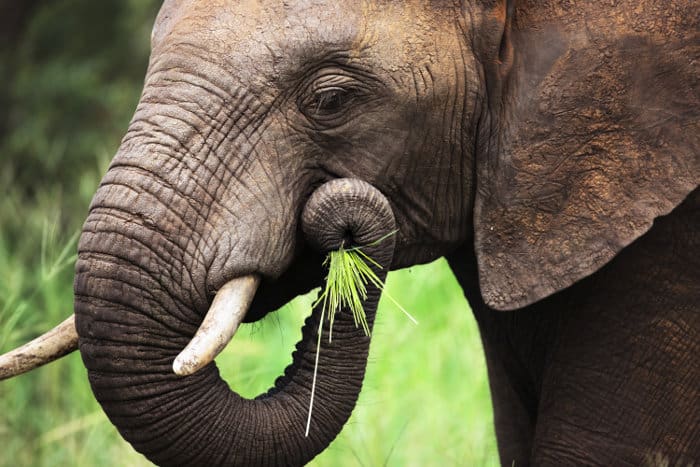 Variety is the spice of life when it comes to an elephant’s diet. They aren’t fussy eaters and enjoy many different types of flora.

During the dry season, elephants source extra vitamins and minerals from the ground when digging for water.

Juicy fruits are a treat for elephants, such as apricots and marula fruits. This bumps up an elephant’s protein and energy levels, adding more nutritional value to its diet.

How Do Elephants Eat? 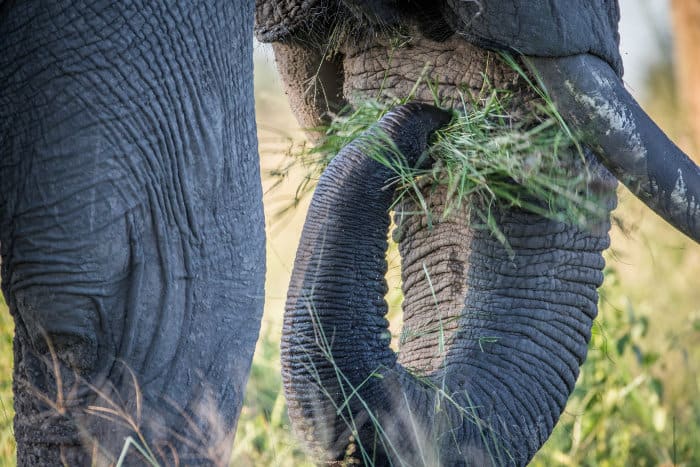 An elephant’s trunk can grow to 2 meters in length and weigh up to 140 kg. The trunk is phenomenally powerful, yet delicate.

African elephants have two finger-like tips at the end of their trunks to grab small objects and help get food into their mouths. The tips are so dainty they are also used to wipe their eyes.

Elephants also use their trunks to help push and pull trees out from the ground. These trunks can lift up to a whopping 350 kg. That’s like the weight of four mature male leopards!

A human body has 639 muscles. An elephant’s trunk has 40 000 muscles. It’s one of the greatest feats of nature that’s ever existed on our planet.

Elephants use their trunk to eat by ripping grass from the ground, pulling branches from trees, and transferring food to their mouths.

Best Places to See Elephants Eating in the Wild

The best time to see an elephant eating food in the wild is during the dry season, which is May to October in Southern Africa, plus January to March and June to September in East Africa.

This is when elephants often congregate along a riverfront or at a waterhole.

Addo Elephant National Park is the third-largest national park in South Africa and is one of Africa’s famous conservation success stories. Addo started in 1931 to save the local population of elephants and is now home to over 450 elephants.

In Addo it’s virtually guaranteed you’ll spot elephants. You can drive around the park in your own vehicle or take one of the excellent half-day safaris operated by park rangers. This park is superb value for a short South Africa safari experience.

Chobe National Park in Botswana is usually the best place in Africa to see wild elephants. There are more elephants here than anywhere else in the world and they roam in enormous herds.

You can encounter wild elephants playing and splashing around in the water, swimming from one island to the other with their trunks as snorkels. It’s a prime highlight of a Botswana safari.

What Do Elephants Drink? 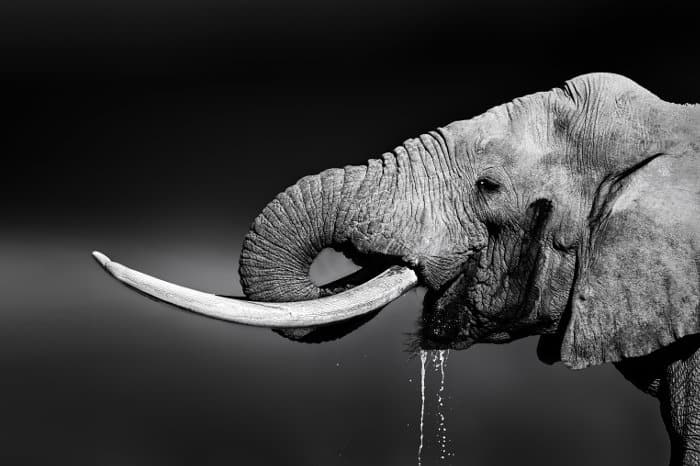 Elephants drink water of course. On average, an elephant drinks up to 200 liters of water per day. That’s as big as a large bathtub.

However, an elephant does not require this amount of water to survive on the savannah. They only need half of their daily consumption to survive. Like other African animals they can store the extra for those days they must go without.

They use their trunk to suck up 14 liters at any one time. However, they don’t suck the water all the way up. Instead, they only suck it halfway then squirt it into their mouths.

Not only does the trunk act as an extra limb for the elephant, but the elephant’s trunk is also a combination of its nose and upper lip. They use it to smell and identify food as well. 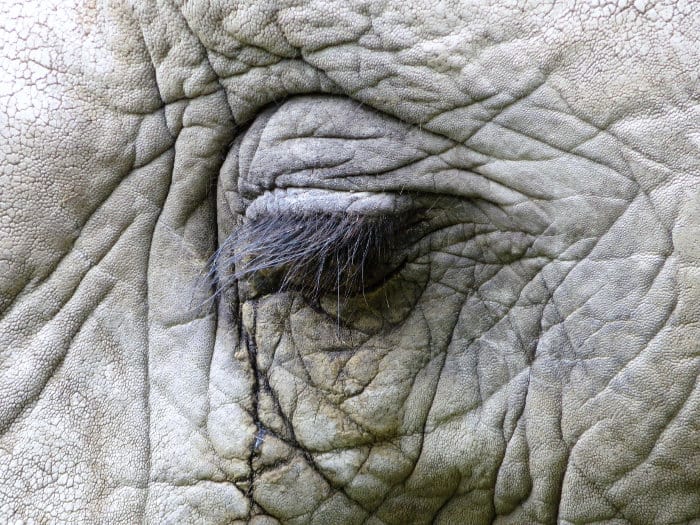 Evidence proves elephants do cry real tears of emotion and show feelings of sorrow and delight.

Elephants live up to 70 years old and what’s interesting is they live longer out in the wild than in captivity. This is down to their emotional instincts. Being out in the wild, they are free to roam wherever their souls may take them. 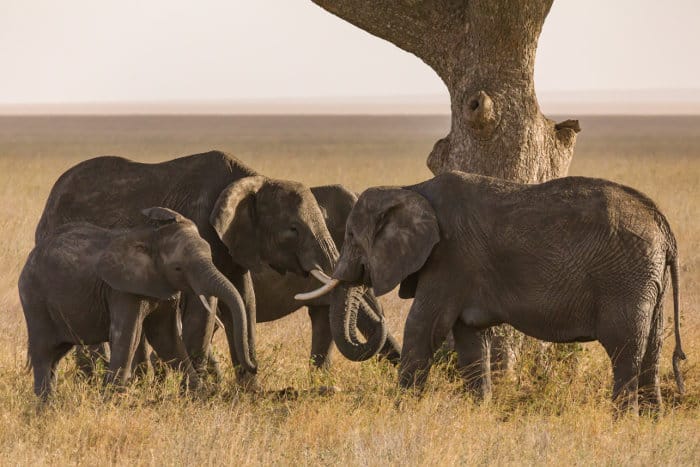 Do you know the term ‘an elephant never forgets’? Well, how could they, an elephant’s brain weighs up to 5 kg. How ridiculous is that?

It should be no big surprise that they are very intelligent animals, and no wonder, having this amount of brain capacity lodged between two humongous ears.

They’re able to store information such as social learning skills and remember things for many years. They can recognize other elephants they met on the African savannah many moons ago. 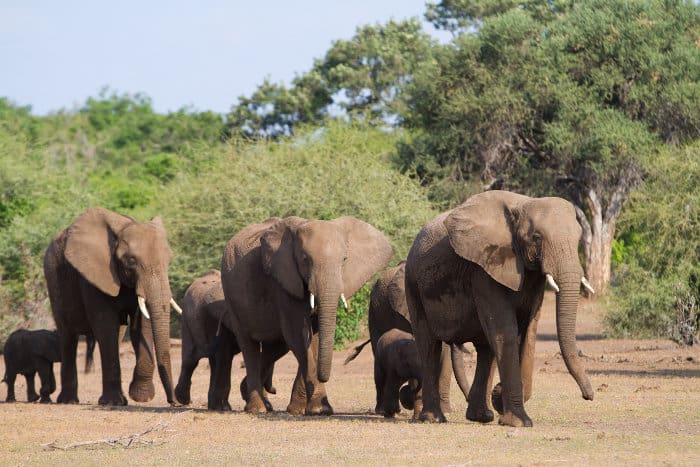 Independent females raise your trunks. Woohoo to these wondrous females who take ownership and leadership to the next level out on the savannah.

Elephants have lived in matriarchal, female-led societies from the beginning, so why haven’t we?

Basically, the older and most experienced female elephant is usually the leader and has the most influence on the herd. A matriarchal herd is a family unit of up to 25 elephants following their female leader.

But, there is a white elephant in the room here.

What about male elephants?

Once a male elephant reaches its teens it will leave the herd and wander the savannah in bachelor herds, searching for a female mate.

Only later can they make elephant babies and start their own herd. However, she’s still the boss. 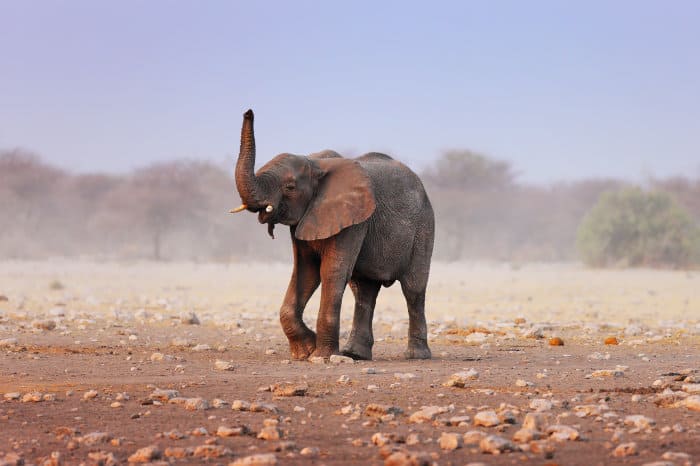 Elephants wag their tails, just like our pet dogs, and what does a classic tail-wag mean?

The answer is happy.

Yes, it’s that simple, if you see an elephant wagging its tail you know the elephant is happy to see you.

If they sense danger, however, their tail will go stiff and straight, normally to one side meaning the elephant is anxious. When elephants flap their ears and stamp their feet it means they are angry. So retreat and get out of the way.

The way an elephant holds its trunks also tells us what they are doing. If an elephant lifts its trunk in the shape of an ‘S’ it is detecting scents carried by the wind. 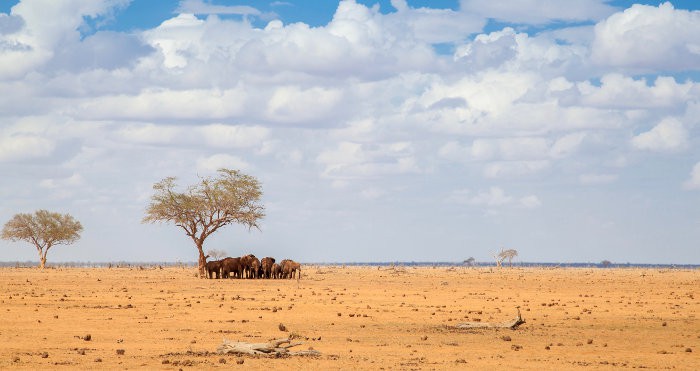 The IUCN has listed both African and Asian elephants as vulnerable and endangered to the risk of extinction. The biggest threat to the elephant community is the ivory trade because its value is now greater than gold.

Elephants are a keystone species and play an important role in the environment and ecosystem they live in.

Elephants drop dung which is full of seeds from all the vegetation plants they eat, meaning new plants will grow to help the savannah ecosystem.

Conservation groups are fighting hard to bring elephant numbers back up and stop poaching, by working with governments to close ivory markets and illegal trade.

They are working closely with farmers and local communities to implement and encourage new ways on how to share the land with these mighty mammals.

You can do your bit just by going on an African safari. Every safari helps preserve the wilderness. So you can connect with your wild side while helping African elephants eat and thrive.

Now that you’ve seen what elephants eat, their large size should come as no surprise. Whatever vegetation these herbivorous giants find, they will consume.

It’s quite a sight seeing elephants eating in the wild. The best way to experience it is to book an African safari where you’ll be able to get close enough to hear them chew. 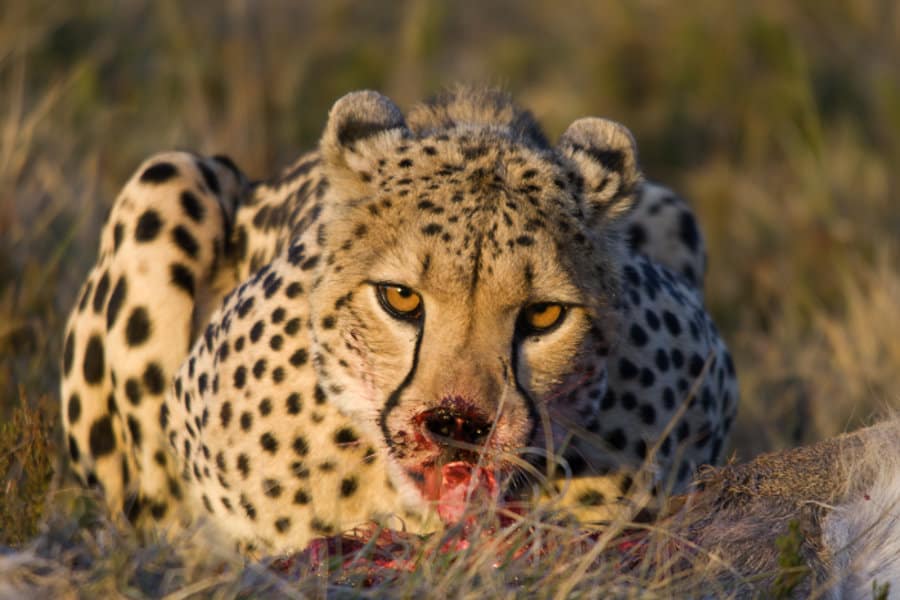 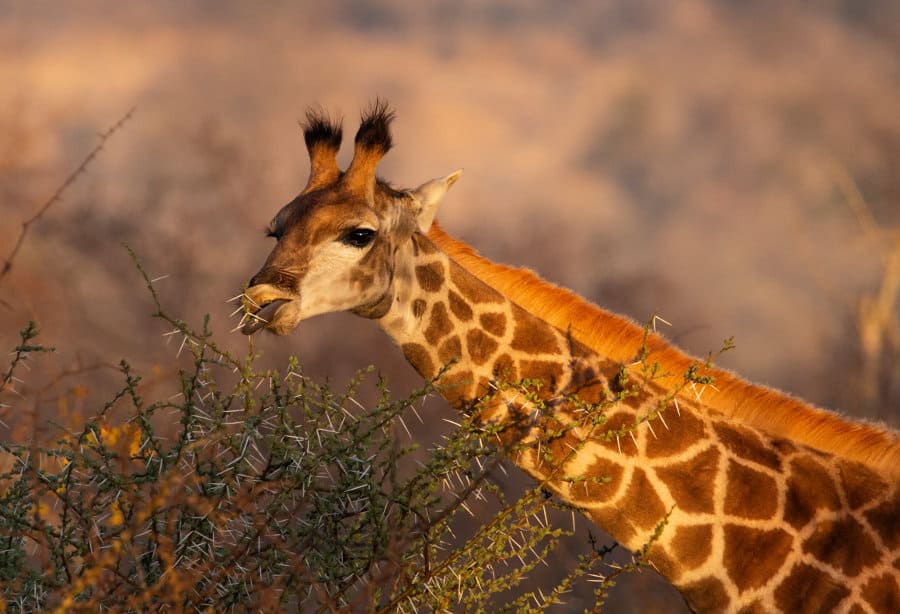 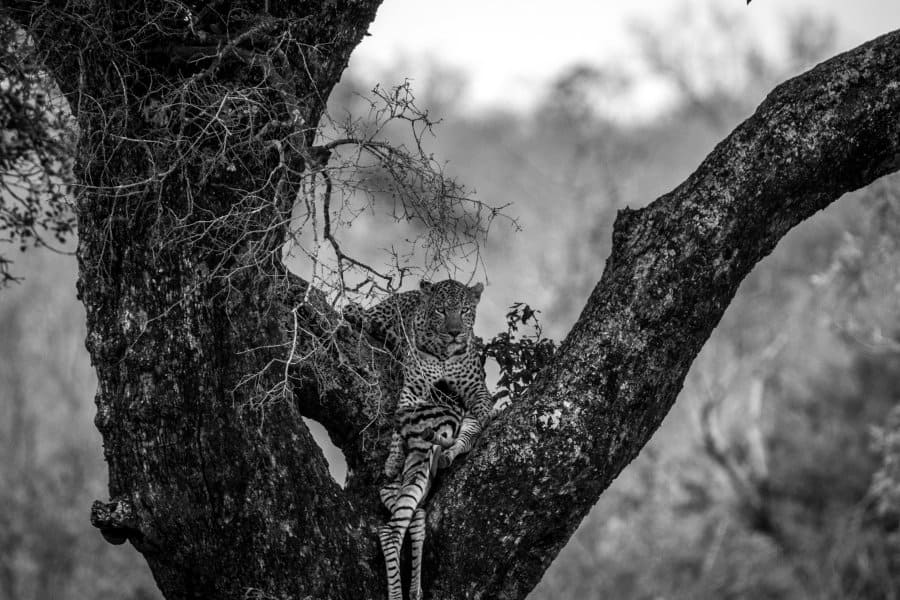