When you think of African animals, mammals take centre stage. But Africa also has a rich array of birds of all colours, shapes, and sizes.

Narrowing down the top 10 most beautiful birds in Africa is tough. Thousands of bird species call this continent home, from huge ostriches to tiny tits and finches.

Beauty is subjective. But one thing is for sure: looks matter in the bird world. Some want to stand out to attract mates; others try to blend in with their surroundings. All can be admired, though everyone will have their preferences.

Here are some of Africa’s most amazing avians, in no particular order. See whether your favourite beautiful African birds made the cut. 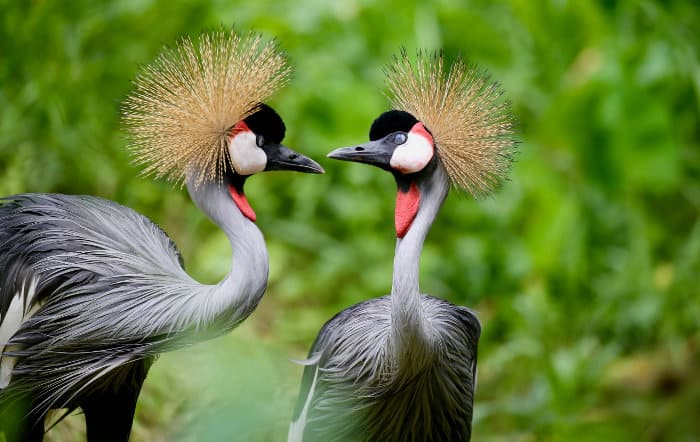 Long-legged, slender, and elegant, the grey crowned crane stands over a metre tall. It boasts grey plumage, black and white head and wings, and a red throat pouch.

It’s their golden ‘crown’ that really makes this ancient bird stand out. Stiff feathers spring up from the back of its head, giving it a regal appearance.

They can be found in the savannas and wetlands of southern and eastern Africa, making them a great safari bird sighting. If you’re lucky, maybe you’ll see their courtship dance. This involves bowing, jumping, and wing spreading. 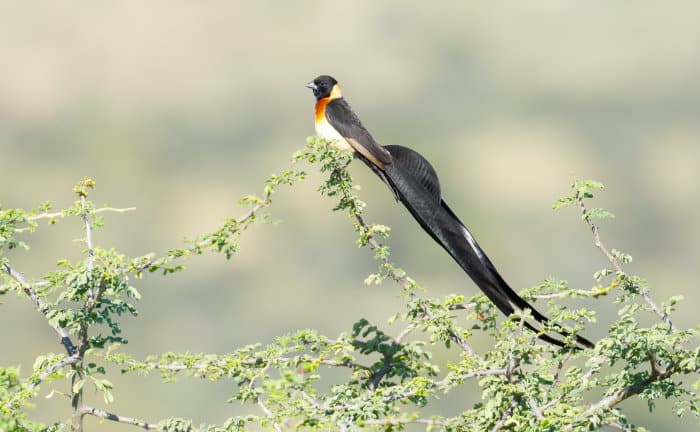 Whydah heck wouldn’t you think this was one of the most beautiful birds in Africa?

Well, for most of the year, this small bird doesn’t stand out. Females and non-breeding males have quite dull colouration and look like sparrows. But, during breeding season, males moult into much more impressive plumage.

The biggest difference is the large black tail, which can grow over three times longer than its body. Males will also get black heads and backs, to go with flashes of orange-brown, yellow, and white plumage.

Long-tailed paradise whydahs are found in grasslands and savannas throughout much of Sub-Saharan Africa.

They don’t make good parents, though. Like cuckoos, females lay their eggs in other species’ nests and let them raise their chicks! 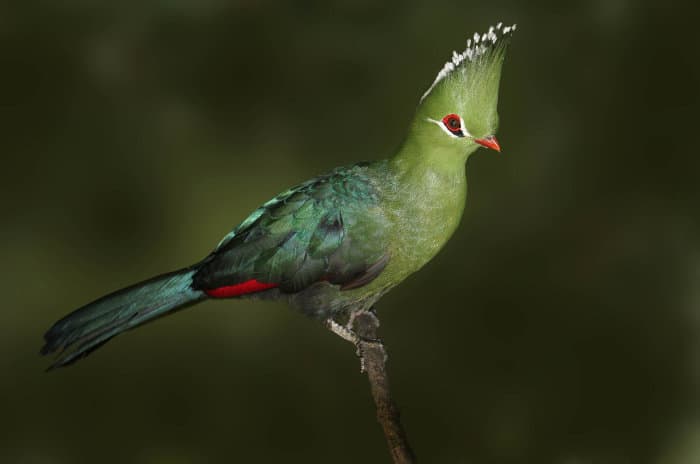 Birders will be green with envy if you spot this beautiful African bird.

Turacos are the only ‘true green’ birds. That is, their pigment is green. Other birds only appear green because of light reflecting off their feathers.

Turacos are in the same family as the “go-away birds,” which get their amusing name from their call. The Knysna turaco’s call is more of a croaky “khaaar-khaaar-khaar.”

Knysna turacos are found in evergreen forests of South Africa and Eswatini.

Knysna itself is a town in southern South Africa, and locals know these birds as ‘louries.’ Whatever you call them, turacos are certainly some of the most unique and beautiful birds in Africa. 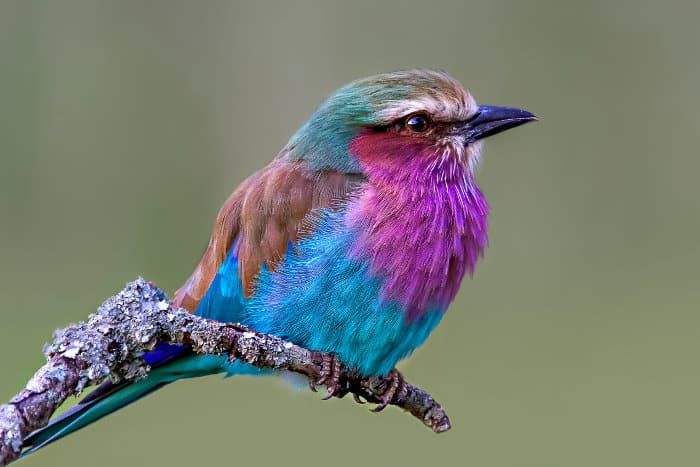 This small, photogenic bird is a common sight on safari. It’s easy to spot thanks to its vibrant colours and preference for perching on high objects.

The lilac-breasted roller is named for its lovely lilac breast. (No surprises there.) But the rest of its plumage is just as colourful. Flashes of greenish blues and reddish browns give way to long, black tail streamers.

As for the ‘roller’ name? This beautiful African bird performs aerial acrobatics! Whether courting a mate or protecting its territory, the bird rolls in flight.

Despite its impressive appearance, the roller doesn’t have the voice to match. Its calls are more of a harsh squawk. 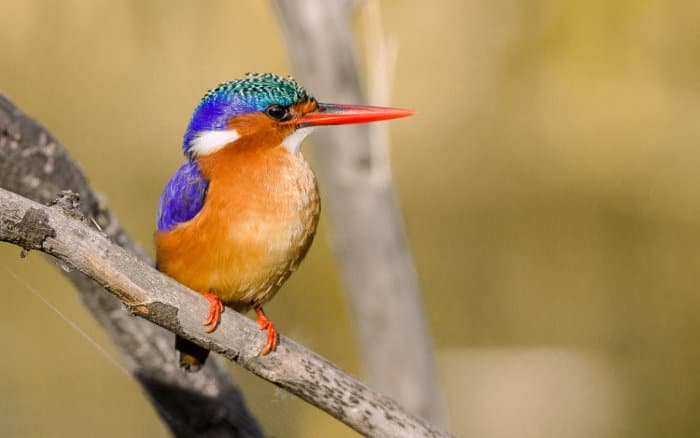 Africa is home to many kingfishers. One of the most striking is the malachite kingfisher, a familiar sight near rivers and ponds south of the Sahara.

This beautiful African bird is widespread in much of its range, only absent from arid areas.

This small species boasts an electric blue back, black and blue crest, and rufous and white underparts. It uses its bright orange-red beak to catch prey, and its bright red feet to grab a branch.

As the name suggests, the malachite kingfisher mostly feeds on fish. When fishing, it will perch by the water, scanning for a target. Then, it quickly drops into the water, emerging with its prey in its large beak. 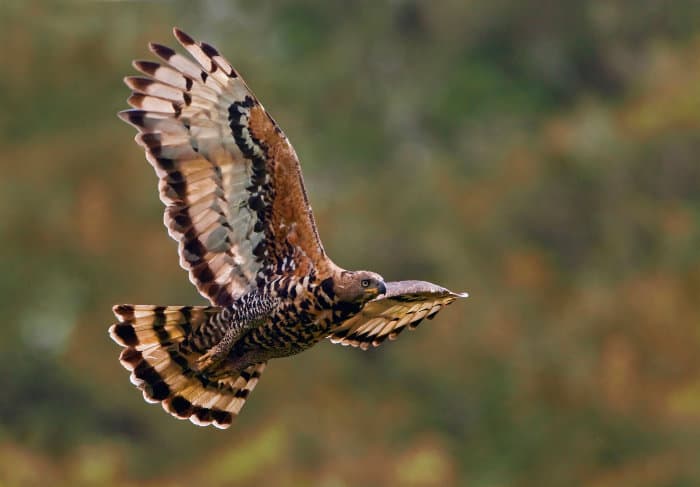 Is this eagle one of the most beautiful birds in Africa? Well, it’s already got the crown, thanks to its distinctive head feathers.

Beauty is in the eye of the beholder, but anyone who likes birds of prey will admire this amazing animal.

Its colours aren’t as bright as some on the list, but the African crowned eagle makes up for it with fearsome talons, a hooked beak, and a fierce expression.

This powerful predator patrols the forests of sub-Saharan Africa. It feeds on mammalian prey, and can take down animals many times its own weight! Its favorite meals include monkeys, small antelope, and rock hyraxes.

This is one bird that’s best admired from a distance. Crowned eagles can be aggressive when defending a nest, and you don’t want anything to do with those talons. 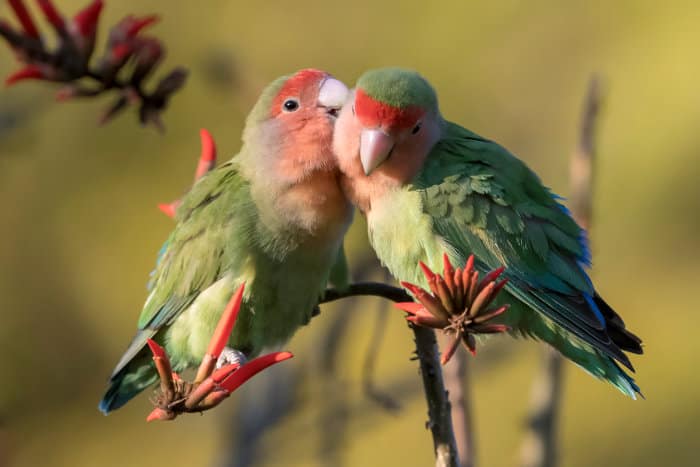 You might not expect any of the most beautiful African birds to live in the desert. This cute critter is definitely a candidate, though.

Lovebirds live up to their name. Social and affectionate, they like to congregate in flocks. They also form strong pair bonds and enjoy huddling close to their mates.

These playful parrots are popular as pets, but wild ones still live in Africa. There are nine species, each with its own distinctive plumage and different habitats. Rosy-faced lovebirds live in arid areas of southwest Africa, including the Namib desert.

You can see how this bird got its name. Pink feathers around the face, a bright green body and a blue rump make this one attractive avian. 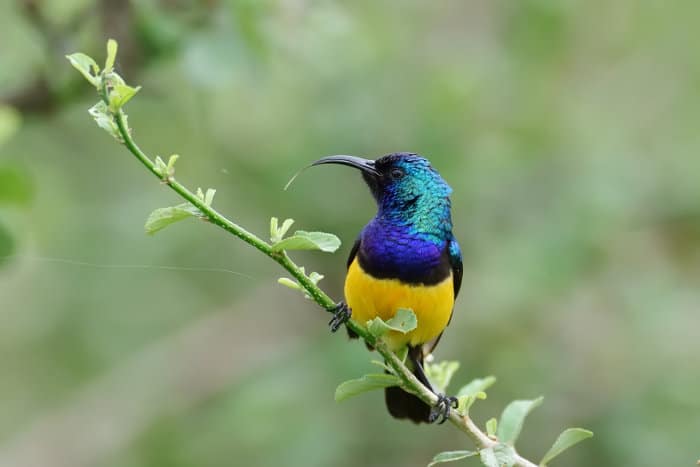 Africa doesn’t have hummingbirds, but the stunning sunbird family has a similar role. These small birds use their long, curved beaks to feed on nectar. This makes them important pollinators for many African plant species.

Sunbirds are certainly some of the most colourful and beautiful birds in Africa, especially when breeding.

The male variable sunbird shows off spectacular plumage to impress the more muted female. Glossy purples and greens and a bright yellow belly make him hard to ignore.

This species is widespread around equatorial Africa all the way down to South Africa. If you’re lucky, you might spot one busily sipping nectar or defending its flower patch. 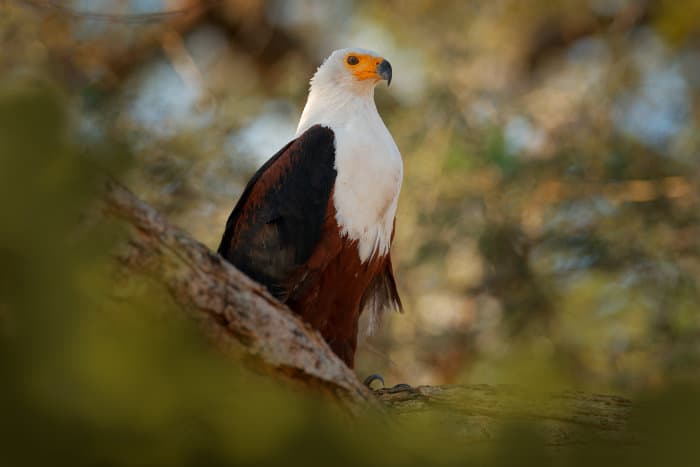 One of Africa’s most iconic sights, this majestic raptor is the national bird of four countries. They’re quite widespread south of the Sahara, but that doesn’t make them any less impressive.

These eagles feed mainly on fish, which they grasp in their long talons. That isn’t all they’ll take, though. They’ll steal a meal from other birds, hunt waterbirds and reptiles, and even the occasional monkey.

The fish eagle’s striking white head contrasts with its brown body and black wings. It’s happy to pose for pictures as it perches above a lake or river. You may even hear its distinctive yodelling cry, known as “the sound of Africa.”

Like many birds of prey, females are larger than males, with a wingspan of 2.4 m. Big is certainly beautiful for this African bird. 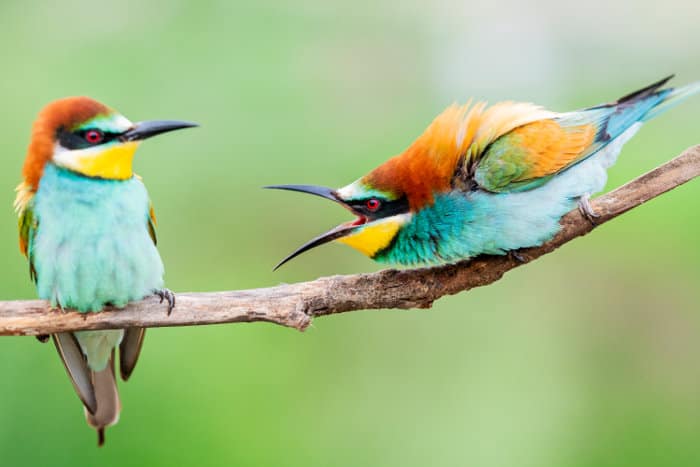 You could fill a list of the most beautiful birds in Africa just with bee-eaters! This bird family comprises 27 colourful species, many of which are found in Africa.

You don’t have to be Sherlock Holmes to figure out how they got their name. Bee-eaters feed on flying insects, especially bees and wasps. They catch prey on the wing, then hit it on a hard surface to remove the sting.

Choosing the most beautiful bee-eater is hard, and everyone will have their own favourite. The adorable little bee-eater? The spectacular swallow-tailed bee-eater? But the one that makes this list is the European bee-eater.

Most migrate to southern Africa to spend the winter, where they moult into spectacular breeding plumage. A kaleidoscope of blues, greens, reddish-browns, and yellows contrasts with its striking black eye markings.

See the Most Beautiful Birds in Africa for Yourself

Picking just 10 of the most beautiful birds in Africa was tough! There are so many spectacular species that didn’t make the list. From the wetlands to the desert, the savanna to the rainforest, Africa is filled with fascinating birdlife.

Some of Africa’s beautiful birds are harder to spot, but specialist tours cater to birdwatching enthusiasts. Even if you’re on safari for Africa’s majestic mammals, you’re bound to see some of the continent’s amazing birds.

Plan a trip today and see whether you can tick off a few of this list, or find your own favourites!