Maun looks unbelievably verdant from the air. As the somewhat ancient but still surprisingly comfortable Air Botswana plane circles on its approach, I see the Thamalakane river full of water which bodes well for the rest of my trip.

The smiling cabin crew tidy up the remnants of our mid-flight snack and scramble for their seats as the ground rises up to meet us and the captain proudly welcomes us to “the gateway to the Okavango Delta”.

It will have to be a large gateway, I muse, as I am surrounded by Americans with copious amounts of hand-baggage. And by copious I mean at least nine pieces each!

A cabin crew member smiles, reading my perplexed expression as I battle to stand still with my single rucksack while all around me ladies in designer bush gear and their long-suffering husbands in matching khaki, looking like they’re dressed for a movie set rather than an African adventure, grapple with more bags than Imelda Marcos had shoes.

As I exit the plane Ms Cabin Crew laughs as I raise my eyebrows and whisper to her “they obviously didn’t read the 15kg rule”.

This rule applies to maximum baggage weights of “soft bags” on the small planes, currently lined up neatly to our left, which will be ferrying said Americans, and me, into the Delta to our various destinations.

I grab my single “soft bag” from the luggage collection hall as the Yanks manhandle steel-reinforced suitcases of every hue and designer label to match their carry-on gear.

I ponder the phrase “carry on” as I dodge past them… Most of them now look like Sherpas about to make a month-long ascent of Everest, with bags and suitcases balanced precariously on every limb.

I am met by a Moremi Air representative and asked to complete some paperwork in their office, which I dutifully do. Some 15 minutes later I am on my way to my own small plane, passing a crowd of now extremely peeved people with open suitcases trying to sort out what clothes they need for three days in the Delta and trying to force said clothes into their “carry on” bags, assisted by long-suffering representatives of the various charter airlines who by now have explained that Louis Vuitton travelling trunks just won’t fit into the belly of a 5-seater Cessna.

I suppress a laugh and leave them to it, beginning the second phase of my own African adventure as I head off to the far north and the Linyanti Swamps – destination Kwando Safaris’ Lagoon Camp, close to the Caprivi Strip.

An untouched wilderness awaits, and Kwando’s group of camps which have achieved near legendary status for their style and amazing game viewing experiences.

Flying over the Delta is a thrill in itself, and takes the edge off the 75-minute flight from Maun. Seemingly before I know it, we are approaching a dusty strip in the middle of nowhere, a single safari vehicle waiting patiently in the shade of a large sycomore fig.

As we land, a herd of elephants, startled by the plane, rush across the end of the strip, providing a somewhat aggravated welcoming committee. We hear their trumpeting on the short drive to Kwando Lagoon Camp – an oasis in an otherwise dry and dusty landscape.

It’s the height of the dry season and the seasonal rains are still a month or so away. Bush fires are keeping the horizon cloaked in a pall of smoke and turning the night skies orange with their fierce intensity. But at Lagoon camp, perennial water ensures a steady supply of game coming to quench their thirst.

Settling into my spacious and luxuriously appointed tent, overlooking the lagoon for which the camp has been named, I am suddenly surrounded by yet another herd of elephants which emerge, silently, from the swaying phragmites which virtually encircles my tent.

Heart in my mouth, and camera at the ready, I perch precariously on the tent’s timber deck and watch the action unfold.

“This is bloody marvelous!” I giggle out loud. “I’m here for 15 minutes and already immersed in elephants!”

The experience is typical of what Kwando Safaris offers its guests – comfort and style inside, and completely wild outside. And exclusive to boot. Small camps (eight or nine tents apiece), a maximum of six people on a game vehicle, and no other game vehicles for vast distances in every direction.

The nearest camp to Lagoon is my next port of call – Kwando Lebala – a three hour drive away.

We set off shortly after dawn on a day which will go down in my own, personal memories as one to remember. Before long we encounter a pack of wild dogs at their den site, with tiny pups making their first forays into the wide, wild world.

With the thrill of that sighting still fresh in our minds, next up is two spectacular male lions, relaxing in the shade of a sickle bush. As we watch the lions, an African wild cat saunters past the vehicle, breaking into a frantic run when it spies its larger cousins snoozing next to us.

And on the final stretch into Lebala, with camp clearly in sight ahead of us, we happen upon two cheetah on a kill, overlooked by three magnificent bateleur eagles perched patiently overhead in a dead leadwood tree.

Lebala is perhaps my favourite camp in the Kwando circuit. Spread out along an island of trees overlooking a wetland paradise and plains beyond, it occupies a perfect position in the Linyanti ecosystem.

Recently refurbished, its tents are now enormous tented villas, replete with timber decks, with walls made only of floor to ceiling mosquito netting providing a cool, open and airy interior.

In the evenings, flowing white curtains are drawn giving the tents an ethereal glow in the flickering light of the tilly lamps which dot the pathways between them.

But at the end of the day, Kwando is not about staying in your tent, it’s about getting out there into Africa and experiencing the wonders of the wild.

And so my day of days continues with an afternoon/evening game drive. With three cats under my belt already, I am not expecting too much. So when we spy a shy, skulking, golden cat with curiously elongated tufts on each ear, it takes me a while for the sighting to sink in… “Caracal!”

I squeal, eventually, and guide Cameroon takes off after the elusive cat. We follow it as it hunts small rodents, marvelling at its lithe, sinewy beauty.

Still breathless from the experience of such a rare sighting, we literally stumble across a young male leopard in a tree. The excitement knows no bounds.

I am reeling from the good fortune of seeing five amazing cats in one day as we make our way back to camp when almost without realising it we come across a small, spotted creature rummaging in the long grass a stone’s throw from camp.

Spotlights are trained and we wait patiently for movement and, presto! A serval pops its head up above the grass and looks at us. One day at Kwando, six cats and one very satisfied adventurer equals an experience to remember.

I leave Lebala, headed for my last stop on this particular foray into the African interior – Kwando Kwara – on a private concession bordering the Moremi National Park, the heart of the Okavango Delta.

Getting to Kwara proves an adventure in itself as Lebala’s airstrip is closed, having been damaged by high floodwaters. This means having to use the airstrip at Selinda, a couple of hours away by vehicle.

The initial part of the drive is mostly through mopane forests with very little going on, but suddenly the scenery opens up to reveal the fabled Selinda Spillway, which for many years was dry – silted up by a high annual flood.

Recently, incredible rains opened the spillway for the first time in almost a decade, and I wonder at the magnificence of it all as we drive past this amazing spectacle – a water course meandering its way across the dry, dusty plains, flanked by green pastures and lush trees and animals of every description.

I make a mental note to come back here and explore as we take off for Kwara, some 40 minutes away.

Kwando Kwara is very much like Lagoon camp – set overlooking a seasonal lagoon in the shade of tall jackalberry and rain trees with some of its tents raised high on stilts to offer exceptional views.

But what Kwara, and its smaller, more intimate sister Little Kwara have that Kwando’s other camps don’t have is the Delta on its doorstep, and an exciting cruise along the waterways of this legendary world heritage site to Godikwe Lagoon, site of a heronry where storks, herons and other water birds nest on the permanent waters of the Delta.

Kwara’s double-decker safari boat allows guests to view the nesting birds at eye-level, making for some amazing photographic opportunities and one of the most spectacular sunsets I have ever witnessed.

Adventure over, I head back to Maun and, eventually, civilization South Africa-style. It’s been a great trip, and Kwando safaris have certainly proved that their reputation for the ultimate Botswana experience is not ill-placed.

After all, where else would you get to see six different cats in one day? 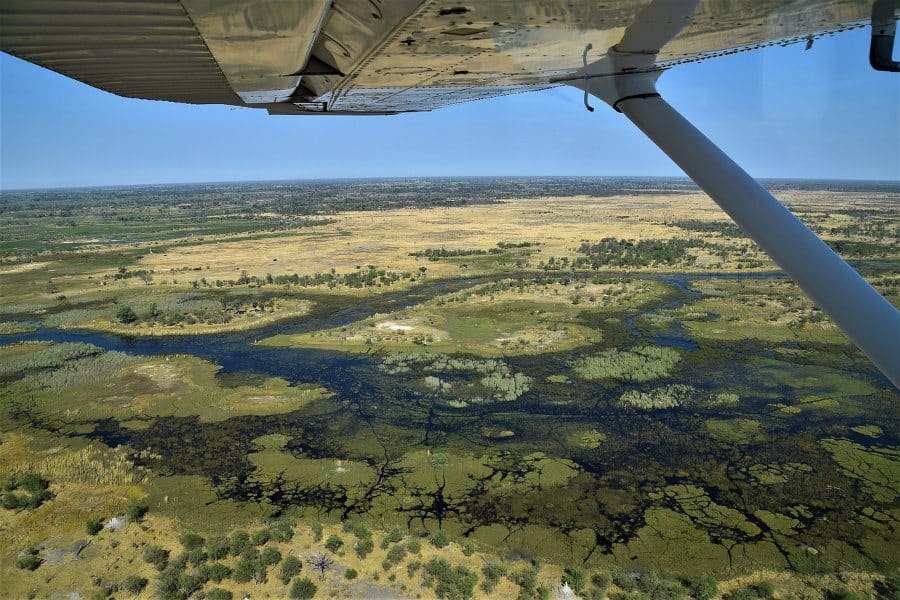 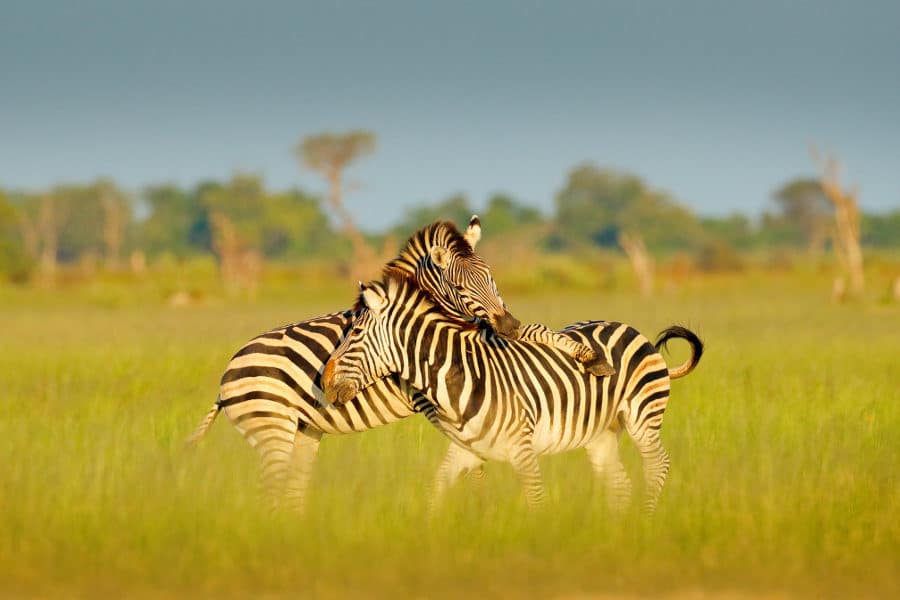 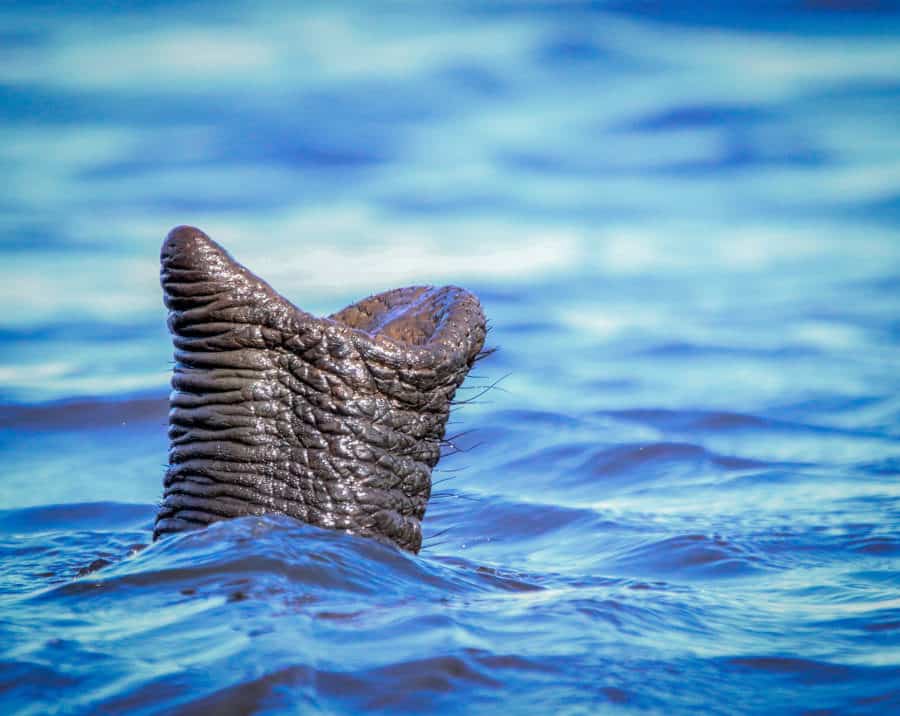