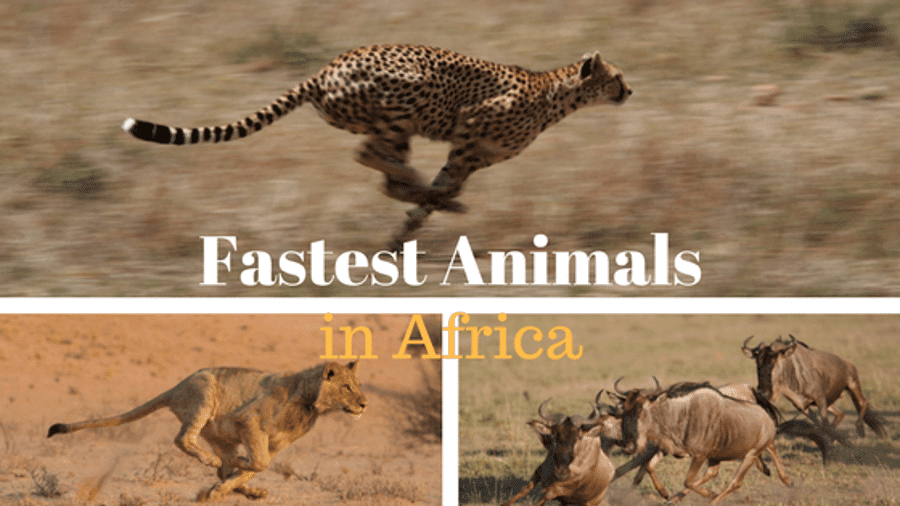 Africa’s Top 10 Fastest Animals – All You Need to Know

Even Africa’s giant animals can move at serious speed. Did you know that a hippo can run at 30 km/h? This article isn’t cheetah vs leopard, it shows all you need to know about the fastest animals in Africa.

1. Cheetah – The Fastest Animal of Them All 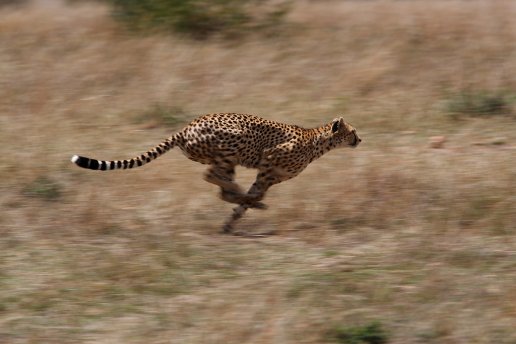 Catch me if you can…

The long legs have non-retractable claws that enable extra grip on the ground, and the cat uses its tail for proper balance and change of direction.

Learn more about how fast a cheetah can run. 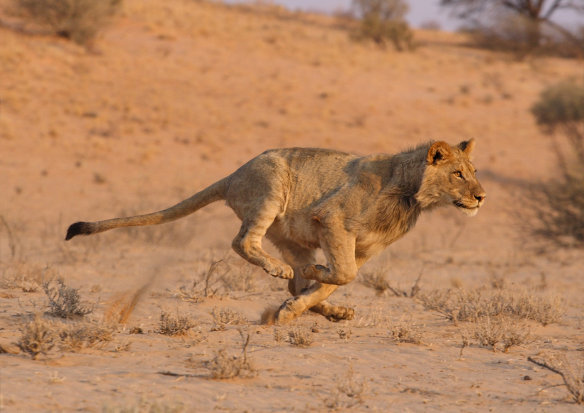 It reminds me of a “Lion King” scene with Simba, don’t you think?

Thanks to the song people think that lions actually live in the jungle. They mostly reside on open plains. Although they can run fast, they can’t maintain this speed for very long. So lions must get close to their prey before striking. 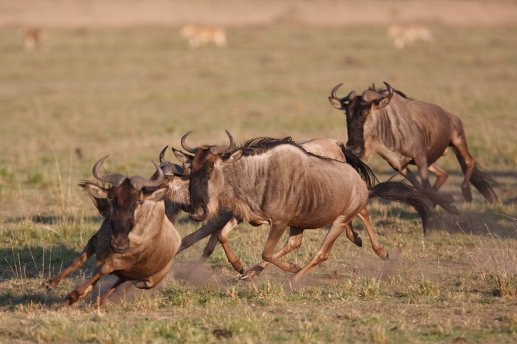 Preyed upon by lions and occasionally cheetah, wildebeest had better run fast if they want to avoid their predators. They may have poor eyesight, but their pace is rather impressive: up to 80 km/h (50 mph)! Note the similarity in speed to lions.

Lions can quickly get up to speed and catch wildebeest unawares. However, blue wildebeest can run and run and run, most famously on the great wildebeest migration. 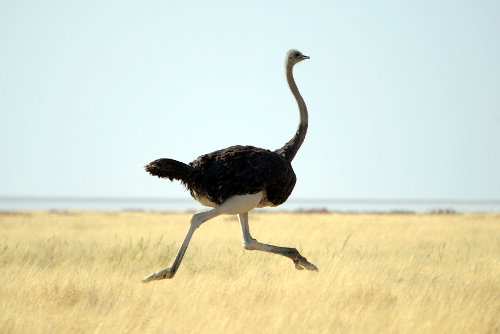 Male ostrich on the run.

The common ostrich is by far the best bird runner out there, and also the fastest animal on two legs. Although it cannot fly, it sure can run: 72 km/h (45 mph)! 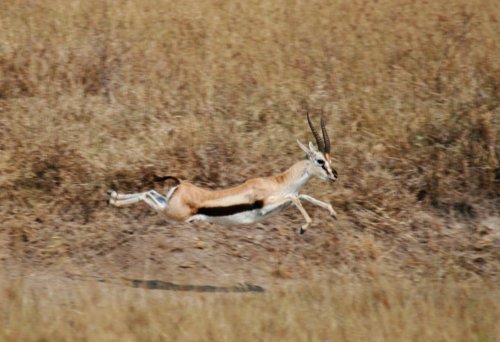 Not only a good runner, but also a long jump champion (© GFDL).

These little guys are a cheetah’s favourite meal on the Serengeti plains in Tanzania. Easy prey you might say, but Thomson’s gazelle have great stamina and legs that propel them to speeds in excess of 65 km/h (40 mph)!

Nine times out of ten, they will outrun any predator over longer distances, and can produce sharp turns with ease. So even though the cheetah is the fastest animal in the world, it rarely outruns a Thomson’s gazelle.

These little guys are like a rugby winger or American football receiver, able to change direction without notice to avoid being tackled. 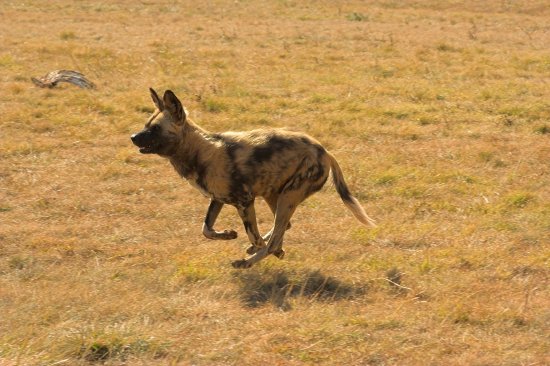 Wild dogs can maintain a speed of around 45 km/h for almost 5 km.

Also known as “Cape Hunting Dogs“, or “Painted Hunting Dogs”, these wild dogs have the greatest success rate while hunting (85%). Their speed is also somewhat remarkable, with sprints of up to 64 km/h (39.7 mph). 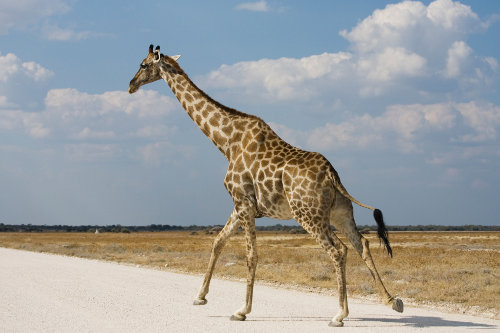 Giraffes have a unique “slow motion” running style! The cowl does not make the monk, as they can easily reach speeds of 60 km/h (37 mph). With those long limbs they can rapidly cover good ground, plus their size means they are only a meal for a desperate predator. 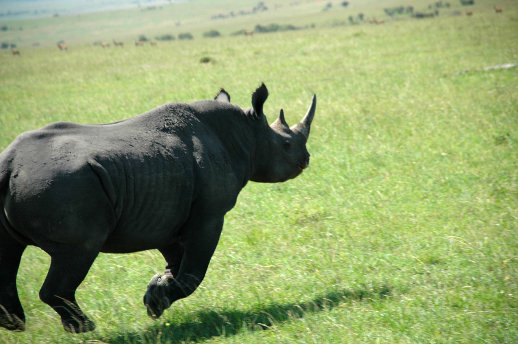 55 km/h (34.1 mph) for the black rhino, and about 50 km/h (31 mph) for the white rhinoceros over short distances. These animals are not to be disturbed and will charge at these speeds when threatened. However, both black and white rhinos typically travel at a much more sedate pace.

Learn all about how fast a rhino runs.

9-12 km/h is usually the norm, while full charge “get out of the way” pace easily reaches speeds upwards of 40 km/h.

Rumour has it that a charging African elephant can be stopped by throwing a big stone (or log) in front of the animal’s fore feet. I have never tried it and wouldn’t recommend you taking the risk though. An elephant charge is something you won’t forget and probably won’t survive!

Learn more about how fast an elephant can run. 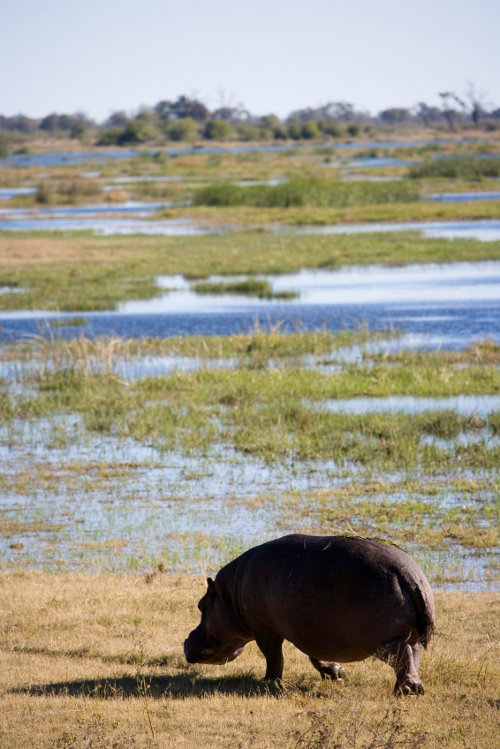 Looks rather peaceful from here, but don’t you dare approach him from too close.

Yep, you heard me right, the hippo is part of Africa’s top 10 fastest animals. Hard to believe? They can speed up to 30 km/h (18.6 mph) on land, and can even run as fast as a man can walk while under water. Bring it on Mr. Usain Bolt, you have a strong contender! 🙂

NB: To put things into perspective, Usain Bolt (the fastest man alive ’til this day) runs at 37.57 kph (23 mph). In other words, Bolt would barely make it on this listing of Africa’s fastest animals.

Where to Encounter the Fastest Animals in Africa

Witnessing any of these animals in full flight is one of the ultimate safari highlights. Check out where you can see them in Tanzania, Kenya, Botswana, South Africa, Namibia, Zambia and Zimbabwe.

For help with safari planning here are some expert tips from our preferred safari partner. 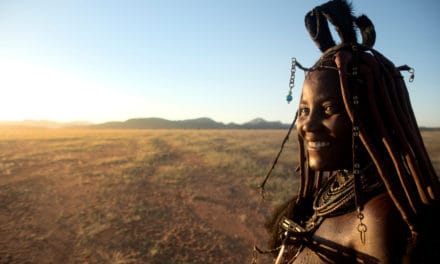 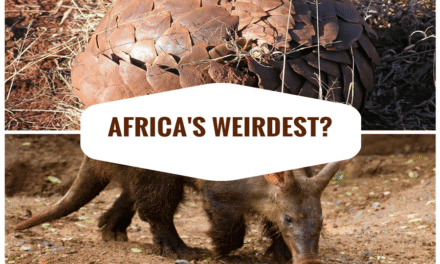 My overlanding trip throughout Eastern and Southern Africa

The nitty gritty about voluntourism in Africa