I just love everything about travel; the land itself; getting to know the locals; the wildlife; the history, and of course, meeting people from other countries.

On our overland jaunt it was a real mix, with three from Australia, two from Ireland, three from Canada, two from Mexico, one from Colombia and two other adventurers from England.

Overall my trip was a good all-round introduction to Southern Africa. If you have travel in your blood, want to see what’s over the next hill, love meeting people, and working as part of a team; I’d certainly recommend the experience.

Once you’ve finished a similar tour you might want to take a safari into some of the wilder parts of the continent, or if you’re into photography, stay in one place for a few more days.

We started out from the Zambezi Waterfront – a very chilled location. I enjoyed just sitting by the river and watching the spray from the Victoria Falls (as for light entertainment, the vervet monkeys in the grounds are a constant source of amusement).

The spray which typically rises to 1,300ft and sometimes twice as high can be seen up to 50kms away, but they are best viewed from up on high, our helicopter flight allowing us to view the largest sheet of water in the world from the skies.

Leaving Livingstone behind us we headed for Kasane in northern Botswana, and crossed the Zambezi where the borders of Namibia, Botswana, Zimbabwe and Zambia meet. We camped on the edge of Maun and in the morning took a short ride to the Chobe National Park.

River cruising is a major highlight and on our visit large areas were submerged due to the vast amount of water coming down from Angola.

With around 120,000 elephants stomping their way through the bush, I was sure we wouldn’t be disappointed. And as luck would have it, we were able to get close to quite a few of these magnificent land mammals as they came down to drink from the water’s edge.

The next journey took us south towards Maun and the Okavango Delta. As we were crossing the fringes of the Kalahari Desert, low scrub and acacia trees dotted the horizon.

An interesting drive, our tour leader had to keep an eye out as cattle, donkeys and even the odd goat had a tendency to wander onto the road! Early the next morning we headed for a village on the edge of the delta.

Pretty amazing in itself, this is the biggest inland delta in the world, all 1.6m hectares of it covering northern Botswana. The villagers helped us into their dugout canoes (mokoros) and we made our way to a remote  island to set up the bush camp.

It was a relaxing day filled with swimming, walking and a short trip on the delta to watch the sunset. Non-stop Africa, another adventure packed day followed, a flight over this watery paradise following our nature walk.

We then headed southwest, skirting the Kalahari for Ghanzi. One for the culture vultures, our guided bushman walk gave us a behind the scenes look at how the indigenous people live and local huts were available for the night – a nice change from a sleeping bag and a tent!

Next up was Namibia, and we kicked back in Windhoek, the capital, for the evening. A well-known haunt, we spent a magical night in Joe’s Beerhouse.

In this restaurant, it’s not just the game on the menu that’s wild – but if you want to know more about Joe’s famous interior it’s best to come and see it for yourself!

Leaving Windhoek we headed north to Etosha, the 20,000-sq. km national park surrounding a central saltpan. The game viewing here was literally on tap as our camp came complete with a floodlit waterhole and viewing tower, and my camera was in constant click mode as we had two full days of wildlife watching!

Our next drive took us south to Spitzkoppe in the Namib Desert. This is an area of bald granite peaks, the highest being 1,784 metres above sea level.

We arrived in plenty of time to have a good look around and set up camp under one of the rocky outcrops. If you’re up for a little impromptu bouldering and a night of sublime tent-less camping underneath the stars you’ll be in heaven.

Hitting the coast just north of Swakopmund, we changed course again and drove north to visit the Cape Cross seal colony, encountering a sand storm on the way! This is where in 1486; the Portuguese mariner Diego Cao planted a cross.

The colony itself is one of the largest cape fur seal colonies in the world and it is an amazing sight, but prepare to be greeted by a stench that packs a similar punch too!

As we headed back down the coast to the German town of Swakopmund I was gearing myself up for a heady adrenaline rush.

Namibia’s main seaside resort is situated between the sea and the desert, and it’s developed into something of an adventure centre.

Quad biking, sand boarding and skydiving over the dunes are just some of options you can add to your bucket list of pursuits.

After popping in to say hello to the flamingos at Walvis Bay, we crossed the desert into Sesriem in the Namib Naukluft Park and enjoyed a walk through the gorge – the prelude to our Dune 45 climb.

It’s quite difficult racing up the spine of these dunes, as you’re constantly sinking back into the sand, but watching the magnificent sunrise makes it, oh so worth it – our unforgettable journey rounded off with breakfast in the desert, and a guided walk with one of the locals.

Pushing on south we were eager to reach the Fish River Canyon, the second largest canyon in the world and a must do pit stop for any budding photographer. The penultimate location on my 19-day overland expedition, this was our last encounter of the wild kind.

Further south the scrub gradually gives way to the fertile Cape Province, home to numerous wineries, but our final destination was Townships.

Changing from our overland truck to a minibus, we left the swanky metropolis behind us and headed into some of the city’s more impoverished urban settlements.

When it comes to learning about apartheid, and the daily lives of some of the poorest people in South Africa, a guided tour in this area of Cape Town is a real eye opener.

So you’re probably asking where next? Well, you could say I’ve got the travel bug, and having recently covered Tasmania and the Antarctic, the next stop is South America – Rio, Buenos Aires and the Iguaçu Falls here we come! As for Africa, I’ll be back…

If you’re interested in taking on a similar adventure in Africa – I travelled on the 19-day South West Safari. 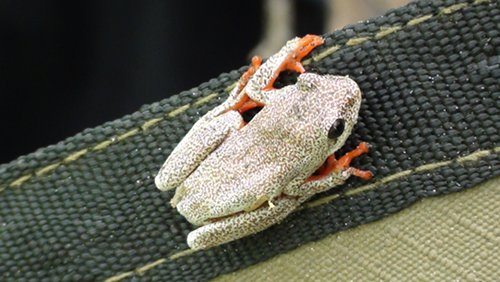