Why do bat-eared foxes have such enormous ears? How does this hunter compete with lions and leopards on the African savannah?

Read on because bat-eared foxes are one of Africa’s most remarkable species. They are also an incredibly distinctive sight on an African safari.

Did you know that bat-eared foxes are polygamous, or that males do all the babysitting duties? Find it all out here! 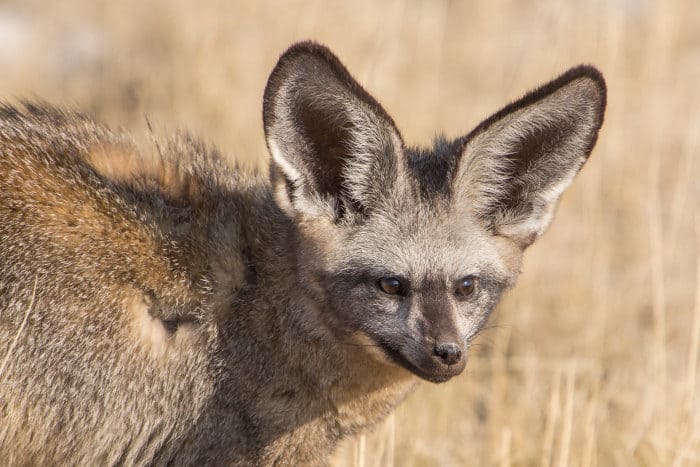 The fox is small but the ears are over 13 centimetres (5 inches) tall. You can spot them poking above the grass, sensing for opportunity and danger. These ears can make up a third of a bat-eared fox’s height!

Of course, enormous ears give this fox an incredible sense of hearing. Not only do these foxes pick up on the sounds of the savannah, they can hear insects moving underground.

Those peculiar ears have another function. They are packed with tiny blood vessels to keep them cool. It is one of the ultimate examples of thermoregulation in the animal kingdom.

Warm blood circulates to the ears where the heat dissipates. This helps the predator stay cool on some of the hottest African savannahs. 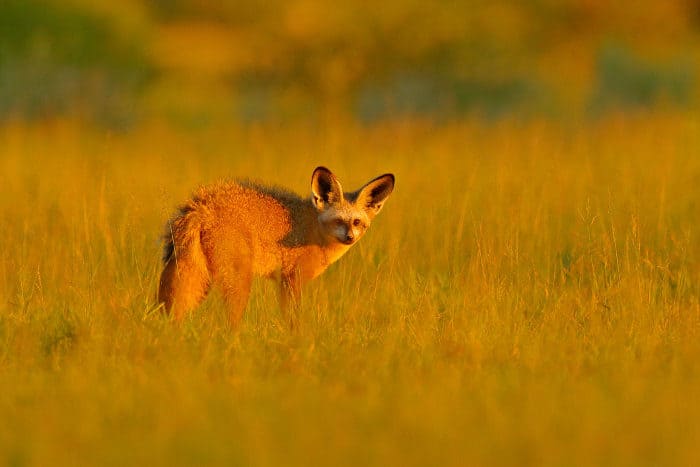 Another method for staying cool is to only explore at night. Bat-eared foxes are nocturnal. They spend most of the day resting in burrows, before emerging after dark to forage and hunt.

Although their eyesight cannot rival the cats, they are guided by their giant ears instead.

4. A strange and specialised diet

Think of an African predator and you will probably picture a lion, cheetah, or endangered wild dog. Bat-eared foxes do not hunt antelope or even other mammals. Instead, they love bush tucker!

Termites make up 70% of their diet. Then there are other tasty treats, such as dung beetles, grasshoppers, scorpions, millipedes, beetle larvae, and spiders.

The fox forages with its ears pointed towards the ground. It listens intently and can hear insects moving beneath the surface. When prey is close the fox will stop, listen, then dig!

It hears insects chewing a path underground and launches an instant strike!

5. Burrowing out a high-protein meal 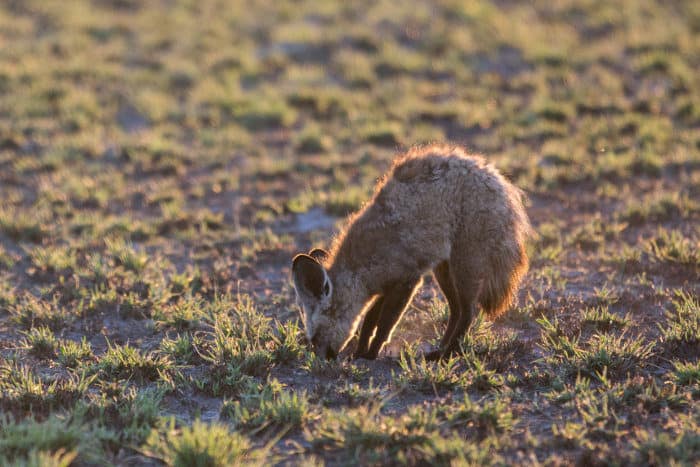 When one of these foxes senses prey it will dig and burrow a path into the ground.

Using an elongated and highly flexible lower jaw it can pull up dozens of tasty little snacks. Not only are all these insects high in protein, they are filled with water.

6. Bat-eared foxes can survive without water

Like the springbok, bat-eared foxes can take most of the water they need from the food they eat.

Essentially they drink the bodily fluids of beetles and termites, so they do not need to visit a popular waterhole and move among elephant and buffalo footsteps. 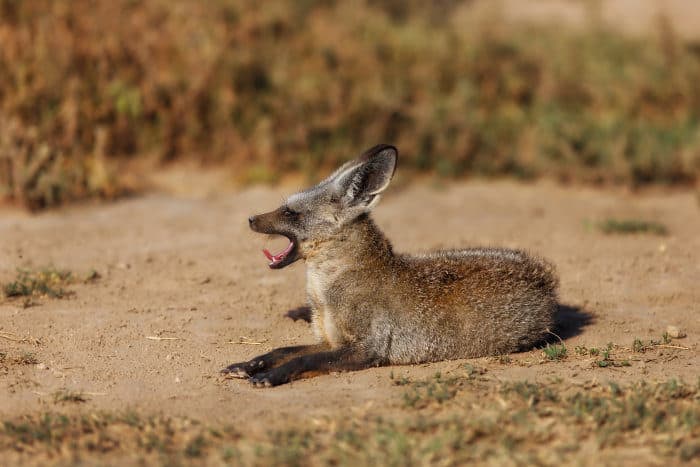 Still, 50 teeth cannot quite rival the South American giant armadillo, who has an incredible 100 teeth. And did you know that a catfish has 9,280 teeth?

Sharp tiny teeth are essential for the bat-eared foxes to chew living prey. The insects are creeping and crawling so 50 teeth are needed to consume them quickly and efficiently.

Once a termite has been captured a special digastric muscle helps the fox open and close its jaw five times per second. In an instant the live insect has been consumed!

8. Hanging around with antelope

More specifically, the bat-eared foxes love antelope dung. The dung attracts insects, who dig beneath the ground for the foxes to find.

9. Living on the East and Southern African plains 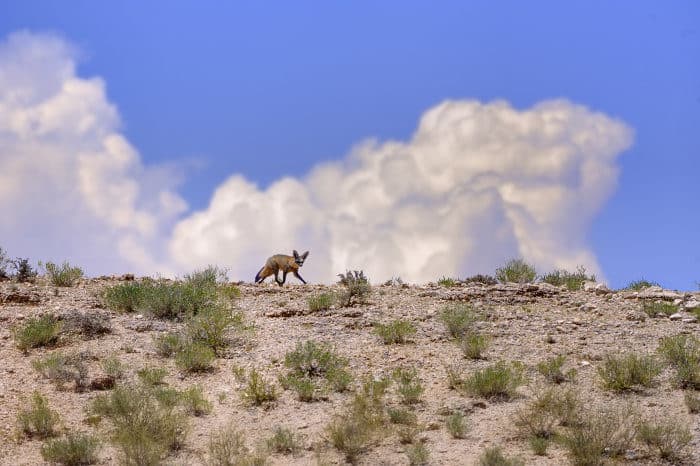 Bat-eared foxes are relatively abundant, but they are difficult to spot due to their small size and nocturnal behaviour.

They tend to thrive in short grass and open shrub, where there is plenty of food and good visibility for avoiding other predators.

10. Bat-eared foxes are hunted by many predators

Lions and leopards would happily chomp down a bat-eared fox, but only if one is stupid enough to get too close.

The foxes are nimble and hard to catch. And a 4 kg fox will not sustain a lion. Hyenas and jackals are a more serious threat, along with eagles swooping from the sky. 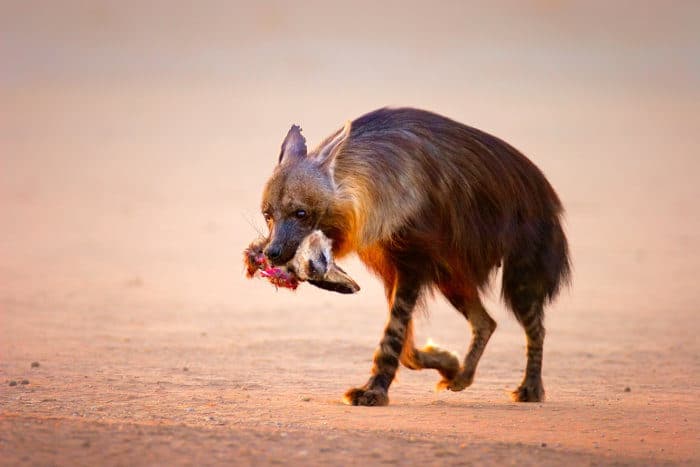 When attacked the foxes use their long bushy black tails as a rudder. They can change directions nimbly and quickly, but they cannot run far from these speed hunters.

Instead, they prefer to lie dead still in the grass and hide. Or they escape, either to high grass but usually to their den.

11. Constructing an incredible labyrinth of underground dens and tunnels 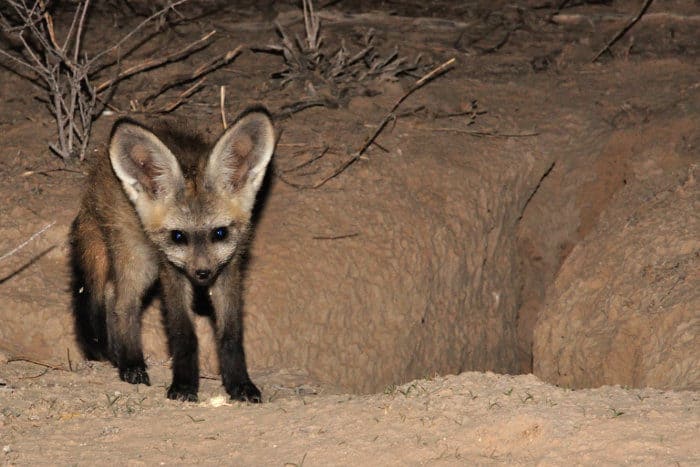 Most mammals who spend their days underground build a complex network of tunnels and rooms. Just think of miners.

Bat-eared foxes construct a vast web of interconnected dens and tunnels. These have multiple entrances and exits, which can be used whenever they need to escape.

One family could build up to more than ten different den systems and use them all over a year. They are essential for escaping predators and to escape extreme summer temperatures.

Some mammals are monogamous and mate for life, such as the tiny dik-dik. Other mammals have a harem system, with one dominant male getting all the females.

Bat-eared foxes are relatively unique in being polygamous. The core of the family is a male and female (think husband and wife) that mate for life. However, after a year or two the male will often take on a second wife.

This is a polygamous marriage rather than sleeping around. As the family increases the male can even get a third long-term mate, although this behaviour has only been observed on a handful of occasions. 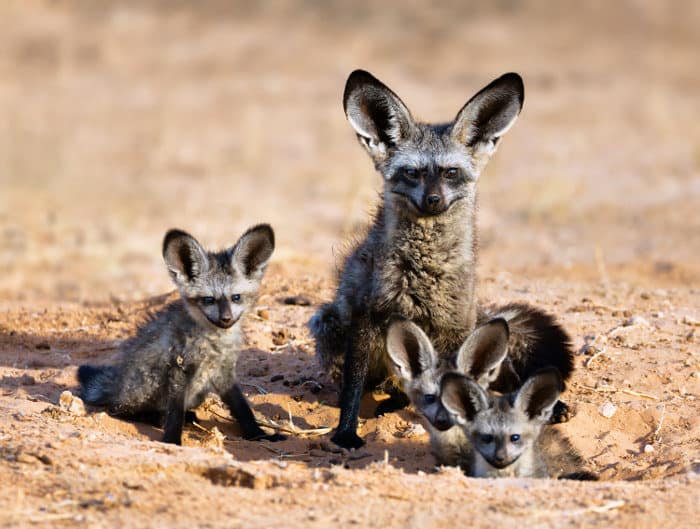 Males will groom, play, babysit, and rear their young. They will also guard the den against predators.

During this time the females will forage and feast on insects. Why the switch in gender roles? Females need more nutrition as they have to give milk to the pups. In comparison, the males only needs to lie around and play!

Researchers found evidence of a direct correlation between childcare and survival. When males stayed longer in the den the cubs were more likely to survive. So if you want to do well as a bat-eared fox you need a good father!

Bat-eared foxes are not territorial. They stick together and happily share their range with others.

On a single night they can travel over 12 km in search for food. After 90 days the young pups are ready to forage their own food. Then the entire family goes out foraging together.

On the way they join up with other bat-eared foxes. So when you see one of these incredible animals, always look out for more. 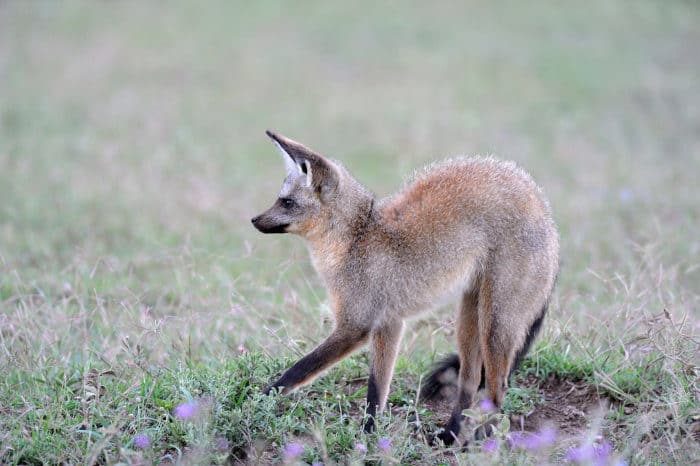 Youngsters stay with the family until they are six months old. By nine months they have reached sexual maturity, so they scamper off looking for a mate for life.

They must be quick in finding a partner as bat-eared foxes have a clearly defined cycle. Gestation is 60-70 days and all females in the same community give birth at a similar time.

16. The one and only Otocyon

Spot a bat-eared fox on an African safari and you can tick off the entire Otocyon genus. Bat-eared foxes are the only animal in this canid subspecies. Otocyon comes from the Greek. Otus means ear and cyon is dog.

Surprisingly they are only 800,000 years old, much younger than most mammals on the savannah.

17. South Africa is the best place to see bat-eared foxes in the wild 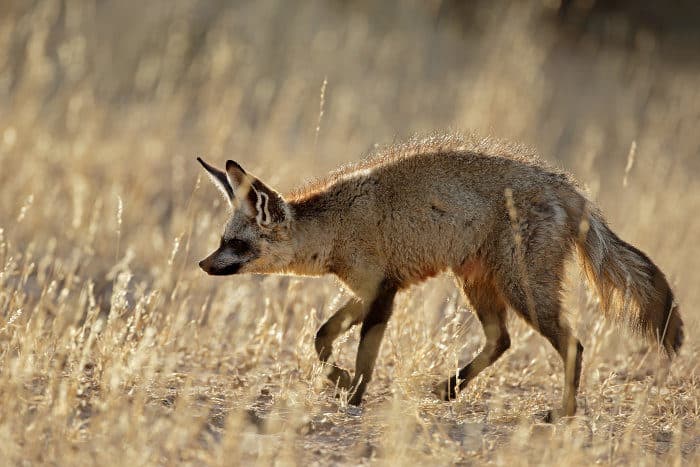 Although these small predators are common in ten different African countries, their small size and nocturnal habits are not conducive to easy safari sightings.

Nighttime game drives are a good activity if you wish to find them, especially in East Africa. They are commonly encountered on grasslands that have recently been grazed. Follow the great wildebeest migration and the foxes will be a week behind the zebra, who are a week behind the wildebeest!

South Africa has a cooler climate. Bat-eared foxes living here are only nocturnal during the summer. During the winter they spend their days overground, often in the shade of an acacia tree.

Most of Africa’s distinctive mammals are threatened by farmers. Mammals eat crops so they are considered a pest.

However, bat-eared foxes are very beneficial for farmers because they actually remove a pest – termites.

Unfortunately, farmland continues to encroach on the wilderness and does reduce the natural habitat of these unusual big-eared foragers. 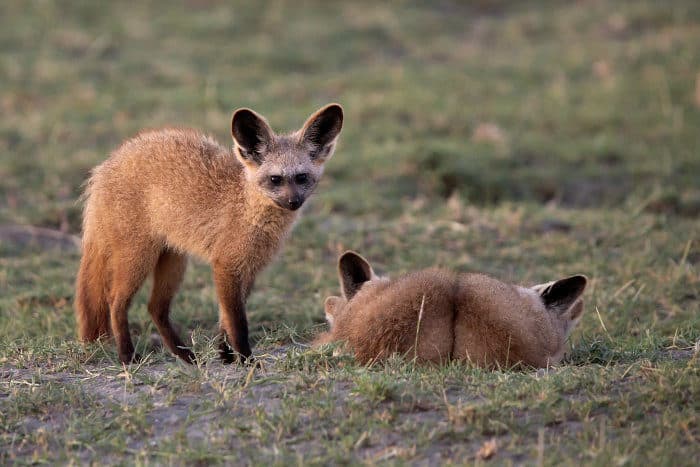 According to the IUCN red list, bat-eared foxes are classified as least concern. Disease and drought are potential threats but right now the future is looking bright for this strange species.

Let’s hope bat-eared foxes can continue to thrive in Africa. And that you get a chance to see one on an African safari.