The springbok is one of Africa’s most evolved species. They can go a lifetime without drinking water and perform the pronk, an incredibly high vertical jump to impress mates.

They are widespread across Southern Africa. You can regularly encounter them outside national parks and reserves.

So you could be driving down a desert highway, watching a dozen springboks skipping across the dusty plains.

These graceful animals still roam in enormous herds and are a symbol of Southern Africa. They are so impressive they provide the nickname and crest to the South African national rugby team, called “the springboks”.

Here is the complete guide to this remarkable antelope, including many fun facts you may not already know. 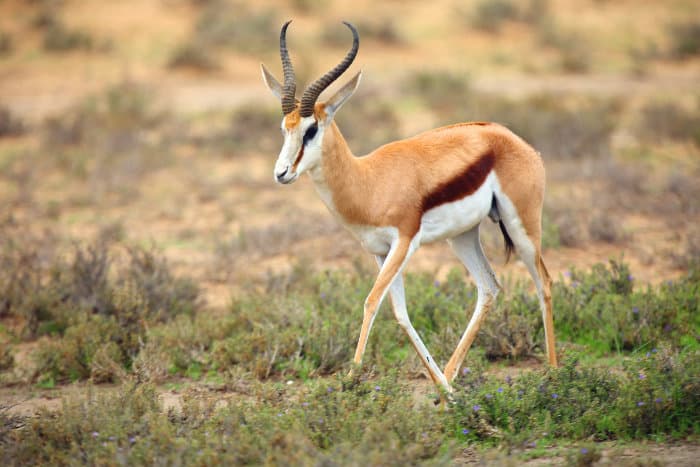 Springbok (antidorcas marsupialis) are antelope members of the gazelle tribe. Despite being very similar to true gazelle, the springbok has its own genus. They are antidorcas in comparison to gazella.

To find out more about what a springbok is, here are several more facts about their appearance, size, and more.

What does a springbok look like? They are slender and agile antelopes with very long necks. Mature springboks measure up to 85 cm at the shoulder and can be up to 1.5 meters in length.

Both males and females weigh 30-40 kg, making springbok a substantial meal for many predators. Leopards and cheetahs like this type of meal, as do hyenas and sometimes lions.

Enormous protruding ears help give springbok an exceptional sense of hearing. This helps them to identify danger in the savannah.

If you’re wondering what’s the difference between male and female springboks, the easiest way to distinguish the sexes is to look at the horns.

Males have longer and thicker horns, although these horns aren’t as impressive as some of Africa’s other most elegant antelope species.

Springboks have long necks and are most closely related to gerenuk, a strange East African antelope that has one of the longest necks in the animal kingdom.

Gerenuk use this long neck to reach high tree branches, but nobody has offered proof as to why springbok need a long neck. 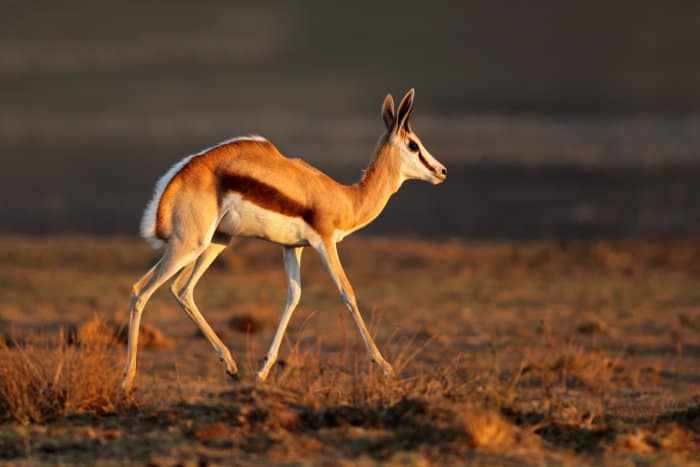 Springboks have four fewer teeth, while gazelles have shorter, narrower noses. But surely that isn’t enough to make them distinct species?

When it comes to the gazelle vs springbok, the key distinctive difference between the two is a patch of white hair that springbok hide beneath a skin fold on their back. No other gazelle has this hidden pouch.

Springboks reveal this white hair when they start pronking. When pronking, springboks turn their skin to fold inside out, thus revealing dazzling white hair. This looks pretty but has a more important function.

Springbok will turn their pouch inside out to release a special scent from their inner glandular skin. This substance smells a little like honey and attracts females. 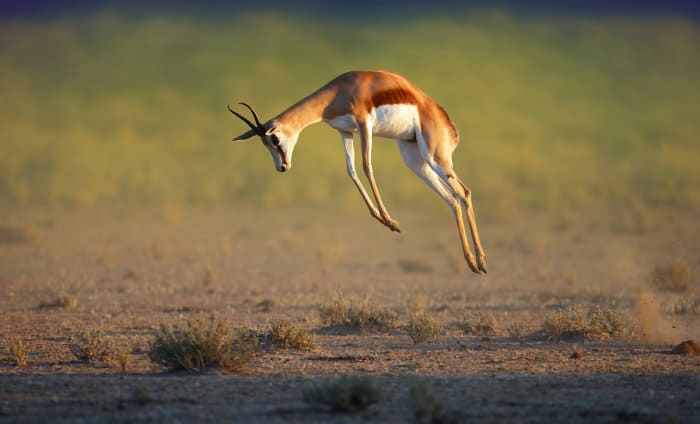 Pronking is one of the most incredible wildlife behaviors you can witness anywhere in Africa. It is an Afrikaans word that means to show off.

This behavior is a stiff-legged vertical jump that takes joyous springbok almost four meters high into the air. And they don’t just jump once. Oh no. A true pronker does these jumps continuously.

These straight-legged jumps are not dissimilar to Masai jumping. Tribal males will bounce up and down with straight legs as a way of showing off their prowess and strength.

While a springbok keeps its legs straight, the leap is accompanied by a rounded back and bowed head. These pronks are not intended to cover a large distance but to show off how high the springbok can jump.

If you’re wondering, “how high can a springbok jump?” This antelope can jump more than 3 meters high.

Why do springboks pronk? Well, we might know what pronking is, but researchers still don’t fully understand why springboks perform these bizarre jumps.

The stiff-legged action is very different from their more ordinary jumping behavior, which is more like a hop.

Their pronks don’t cause alarm within the herd. Nor do they alert the rest of the herd to something on the savannah.

Watch that video again, and you will notice that their behavior does not even warrant a glance from other members of the herd.

It seems that springbok pronk purely for fun or to simply practice their high jumps for when mating season comes around.

Repetitive pronking will open out their skin pouch and secret scent, yet it seems that occasional pronking is just something the springbok do because it feels good.

Where Do Springbok Live? 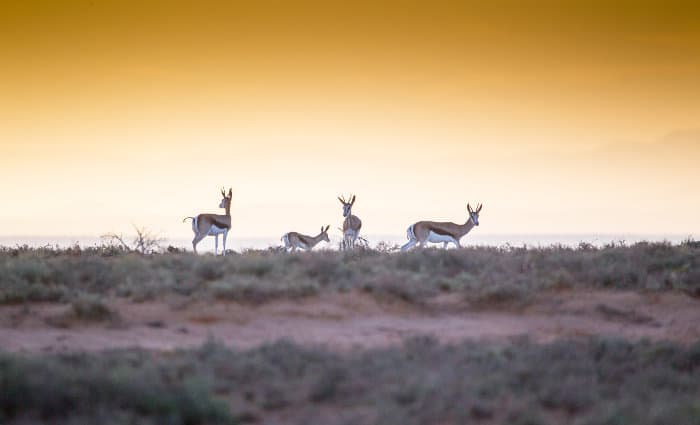 Springbok are desert-adapted animals that you’ll only see in Southern Africa. They are widespread across South Africa, Botswana, and Namibia, with a limited population in Angola as well.

This is one of the very few African animals with an expanding population. The IUCN currently estimates that there are 1.4-1.75 million springboks in Southern Africa.

However, they acknowledge that this is probably an underestimate and that the population could be above 2 million.

Before the colonialists arrived, it’s believed that springbok migrated across the Karoo in their millions. This would have been a migration on par with the great wildebeest migration in East Africa.

These massive treks are called trekbokken and you can still witness them in Namibia and Botswana, although not on the same scale as 500 years ago.

They mostly live in areas with little water, including savannah, grassland, desert, and shrubland.

This adaptability has enabled them to live in areas where there are very few people. So despite being hunted for their meat and skin, they continue to increase in number.

Springbok meat is very tasty and you can buy it in supermarkets all over Southern Africa. It is usually cooked on a braai (barbecue) and has a lean texture and rich gamey taste. 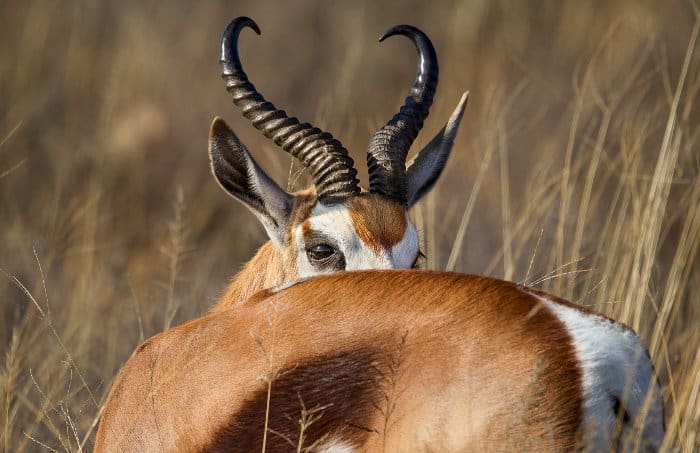 Now that you know where to find springboks let’s look at some quirky behaviors you might encounter.

From seeing a springbok jumping high to living gracefully in herds, here are a few habits to know.

These pronkers live in herds that change with the seasons. A single springbok herd could number more than 1000 individuals, although it’s more common to encounter herds of around 100.

Outside the mating season, most herds will have three males to one female. They live in groups as there is safety in numbers. More animals mean more sentinels on the lookout for danger.

The behavior of these friendly herds changes during mating season. Dominant males control the best and most nutritious territories.

They show their homes off to the females and try to convince them to stay. It’s like them saying hey, I’ve got the best grass, so come have babies with me.

They mark these territories with urine and big piles of feces. Fights between rivals can become bloody. Springbok meet head-on and lock their horns in battle. They also like to stab at the neck and eyes.

Larger males will quickly kick out any rivals. So even if a male springbok has been with the females for nine months, he will soon be cast out and forced to join a bachelor group.

Springbok antelope are social animals active at dawn and dusk 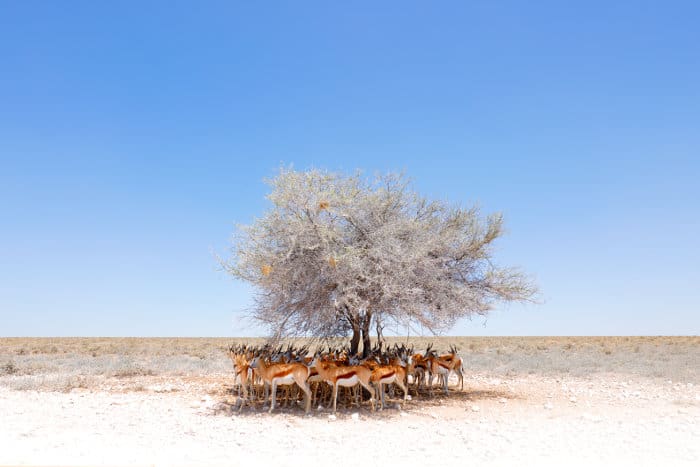 Anyone that lives in the desert knows the importance of dawn and dusk. These cooler daytime hours are the best for travel – nobody wants to be marching across the Namib Desert at midday!

These cooler hours are when the springbok are most active and do most of their pronking and grazing. Springboks prefer to feed in the open as this provides greater protection from predators.

If possible, they will avoid trees and bushes, although this is unavoidable when the temperature rises during the middle of summer.

Usually, they cool off by digging away the top layer of earth and bedding down in the cooler dirt and sand underneath. 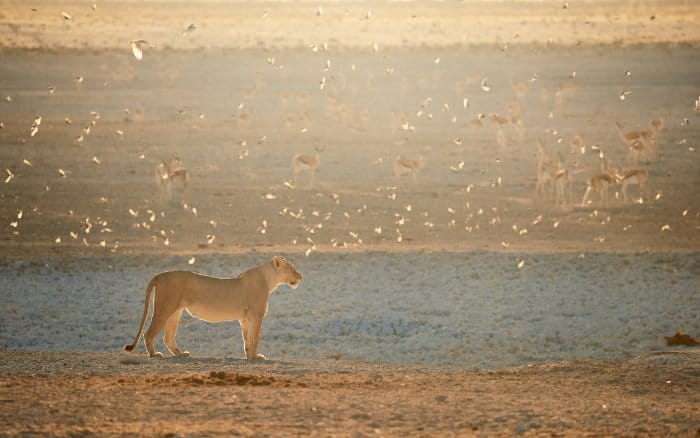 Springbok’s success can be partially explained by how difficult they are to catch. For most predators, the reward isn’t worth the effort.

Accelerating across the savannah, a springbok can reach speeds of almost 90 km/h (56 mph).

That makes them faster than lions, leopards, hyenas, and almost every other animal in Africa. Importantly, springbok are faster than all their predators, except for cheetahs, the fastest animal of all.

Not only are springboks fast, but they are also remarkably agile. They hop, jump, and sidestep like the very best rugby players.

And even if an apex predator captures them, these antelope simply don’t provide enough meat.

A fully grown 30-40 kg might be okay for a smaller hunter like a cheetah or caracal, but it won’t sustain a lion pride or leopard.

The exception to this is during the breeding season. Young springbok are far easier to catch, and they become prey for a wide range of smaller predators.

Martial eagles and tawny eagles swoop down, then carry newborns into the sky. Spotted hyenas can raid herds, savaging many individuals in a single attack. Black-backed jackals and wildcats go in for a kill as well.

Yet the springbok population continues to expand, which is perhaps because their predators are declining. 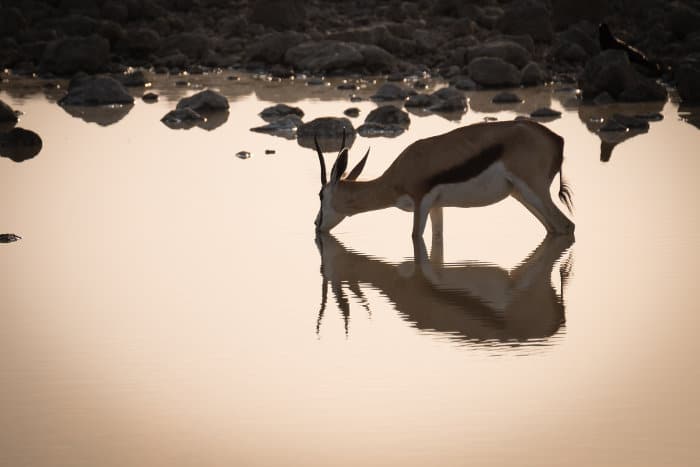 Yes, that’s true, but not every animal needs to drink.

Most animals must stay within close reach of water. Antelope can rarely graze for more than three days from a water source. This limits where they can travel and eat.

Springboks have adapted to survive in very harsh arid environments. Instead of drinking, they take all the water they need directly from their food.

All grass and foliage contain a certain amount of water. Springboks just need to locate grazing lands where the food contains at least 10% water.

To put their evolution into perspective, most vegetables we eat consist of over 80% water. Carrots have 88%, spinach 91%, and celery 95%.

Yet we can’t survive more than a few days on a diet of vegetables and no water.

Springbok can live for years without ever taking a drink.

This is also part of their defense strategy. Waterholes are among the most dangerous places to be in Africa. Predators know that animals must come to drink, so they lay ambushes and wait for prey to cross their path.

In comparison, springbok will deliberately choose pastures that are as far away from water as possible. They know that their hunters won’t travel so far from water, so they get to graze in peace.

See a Springbok Pronk in Africa 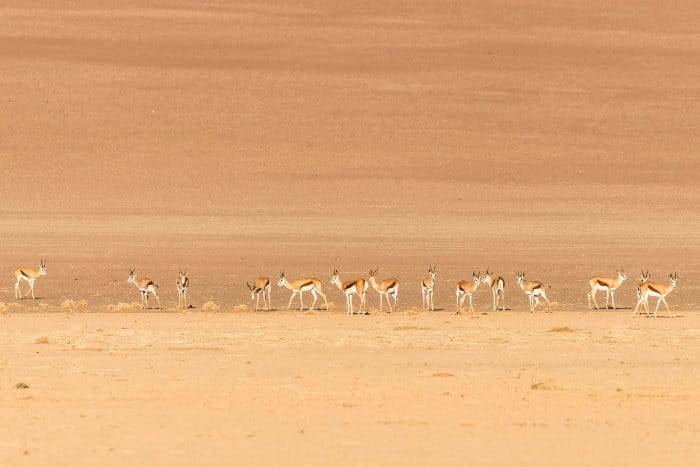 The best thing about springbok is that you don’t need to go on safari to see them pronking.

These elegant antelope hop all over the desert and Cape. You can see them at the Cape of Good Hope, close to Table Mountain, or anywhere along the N7 connecting South Africa with Namibia.

They are the animals that will accompany you on a road trip across Southern Africa, the legends that can become synonymous with your holiday.

Springboks are common in all the major national parks in South Africa, Botswana, and Namibia. You will need to go on a safari to see them in these protected habitats.

Often these animals go unnoticed on a safari. You are looking out for lions, elephants, and unusual species, so it’s easy to miss the abundant springbok.

But when you watch them pronking across the grasslands, it’s an experience you won’t forget!