The African elephant is a true continental icon and embodies the spirit of Africa’s last, truly wild places. Perhaps more than any other animal, these gentle giants are incredible to behold in their natural habitat.

So, where is it best in Africa to view this noblest of creatures? If “ellies” are what you want more than anything else, where’s the place to go? There are several elephant safaris and game drives in Africa that let you experience this sight, so let’s take a look at the countries that offer the best of the best.

This post covers the best destinations for walking safaris and game drives if you want to see elephants in Africa. The dry season is the best time to go ellie-spotting, as this is when the elephants traverse their habitats looking for fresh grazing and water to drink.

Botswana is home to the largest elephant population in the world with over 130,000 African elephants. This land-locked neighbor of South Africa, Namibia, Zambia, and Zimbabwe is renowned the world over as “elephant central”.

It’s home to many parks that allow game drives. Are you ready to view the big herds of elephants that live in them? 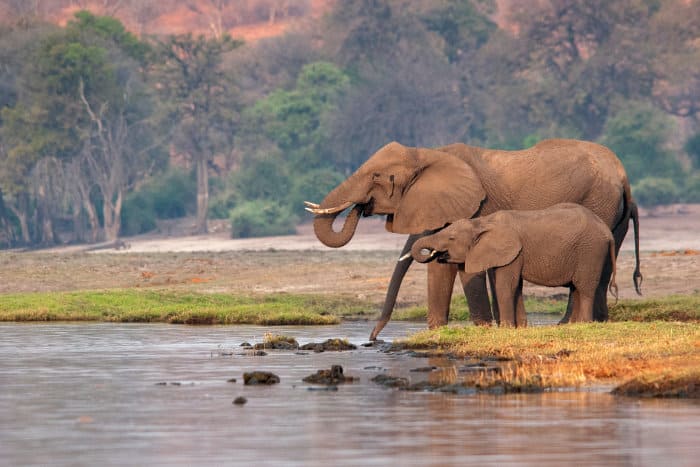 Chobe National Park, Botswana is curiously reputed as having “too many elephants.” This park bordering the Chobe River is a must-see for African elephant enthusiasts traveling in Botswana – especially in the dry season.

With the river after which it is named as its northern border, Chobe National Park covers a huge area of more than 11,000 square kilometers spreading to the edge of the Okavango Delta, the Moremi Game Reserve, and the Savute Channel.

The Okavango Delta itself is another elephant hotspot, with huge breeding herds covering its 16,000 square kilometers.

Here you can see African elephants in abundance during the annual floods which take place in April/May each year. This network of channels and lagoons dotted with palm-covered islands is often likened to paradise and is perhaps one of the best big game destinations in Africa.

You can also visit during the dry season from July to September. You may be able to spot a thirsty African elephant out searching for some water.

Thanks to the Kenyan Wildlife Service’s dedicated anti-poaching efforts, the country’s elephant population has more than doubled since 1989. Making now the best time to go looking for elephants on an African safari.

The ellie boom in Kenya makes it one of our top places to see elephants in Africa. You can also see other wild members of the Big Five, such as lions, leopards, and rhinos, on game drives and walking safaris. 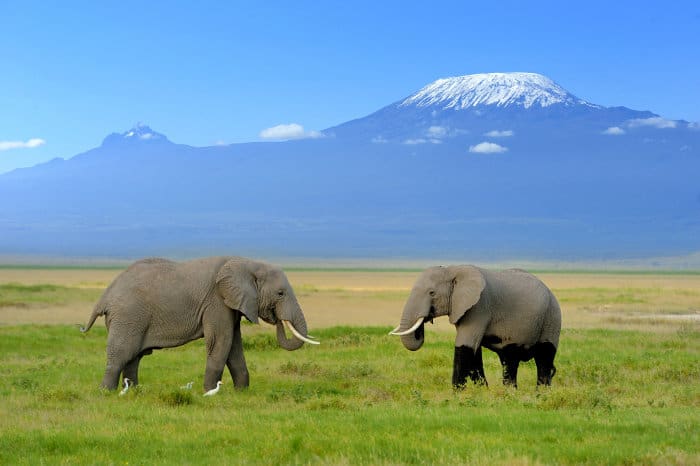 If you think of elephants in Kenya, the image that instantly springs to mind is of huge tuskers on vast grassy plains with the majestic snows of Kilimanjaro towering over them. All of which equates to one place – Amboseli National Park.

Although only small in size (around 400 sq km), the park is bordered by vast Maasai grazing lands spreading east to the Chyulu Hills and Tsavo National Park beyond them.

With no fences preventing movement, Amboseli’s elephants and wildlife have free range through this vast corridor, moving from water source to water source.

Elephants are always present in Amboseli, thanks to two springs located in the heart of the park. Fed by the icy meltwaters of Kilimanjaro, they give rise to a perpetually green oasis in the middle of the otherwise parched and dusty plains.

This is where to go if you want to see some of the last wild tuskers left in Africa – there are some truly magnificent bulls still proudly roaming this region.

South Africa – A Great Family Experience in the African Bush

South African safaris are hugely popular amongst African safari destinations, thanks to the country’s incredible wilderness and abundance of wildlife and elephants to be enjoyed. South Africa isn’t just a great place to see elephants in the wild – you can also see the rest of the Big Five on safari here.

Kruger National Park is one of the best destinations for elephant safaris in Africa and is a must-see if you’re visiting South Africa for the first time. 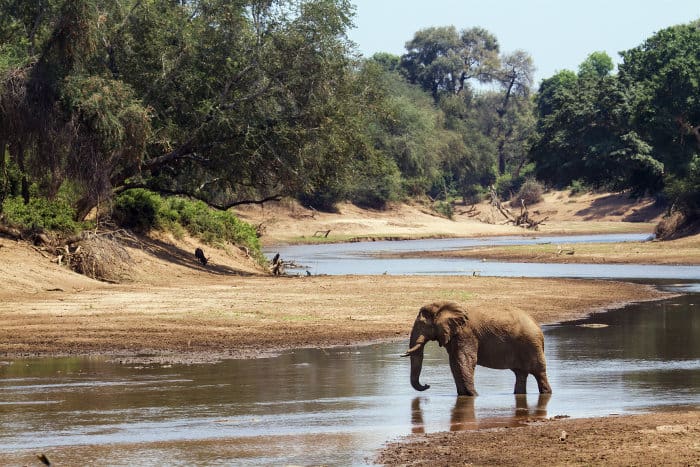 The elephant capital of South Africa is undoubtedly the Kruger National Park. With almost 2-million hectares, there is absolutely no way to ever get tired of the legend that is the Kruger Park.

Run by South African National Parks, with accommodation options to suit all budgets, from campsites to luxury 5-star lodges, this is where you’ll find the bulk of South Africa’s elephant population.

Whether it’s in the lusher southern part of the park, the mopane woodlands of the middle section, or rocky outcrops of the far north, there is never a shortage of elephants in this park.

Whether it’s a large elephant herd or small bachelor groups, spotting an African elephant in the Kruger Park is easy. This is thanks to permanent water sources and the well-maintained camp network, which keeps a record of all elephant sightings.

Another great South African destination to view a family of elephants is the Addo Elephant National Park in the Eastern Cape region. It’s now the third-largest national park in SA and a tribute to conservation efforts –  having been reduced to a mere 16 elephants in 1931 it now boasts more than 550 elephants today.

Zambia – Home to the ‘Birthplace of the Walking Safari’

The Zambian elephant population suffered a huge knock in the 80s due to poaching. The nation has seen a rebound in numbers since then, however. There are over 27 000 elephants in Zambia, and numbers are especially high in the Luangwa Valley and South Luangwa.

The Lower Zambezi Valley is perhaps one of the best places in Southern Africa when it comes to spotting elephants – and certainly one of the most beautiful!

Home of the Lower Zambezi National Park and the ground-breaking Chiawa Partnership Park which borders it, the Zambezi River itself is central to all things elephant. 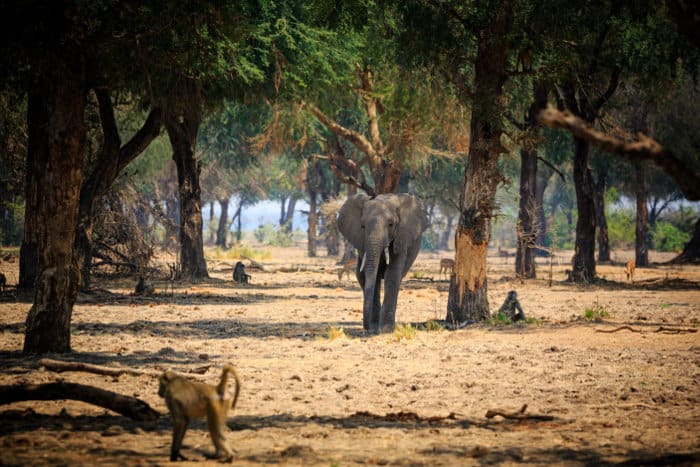 Lower Zambezi National Park borders the Zambezi River, which is a must-see if you want to see wild elephants in their droves.

The best time to see elephants would be during the dry season when the elephants regularly travel around the river to drink and graze.

Huge breeding herds regularly go to the Zambezi River and often cross over to neighboring Zimbabwe, and the Mana Pools National Park. You can see elephants in large herds, lone bulls, and bachelor groups on the lush islands in the middle of the river, which in places is more than a kilometer wide here.

South Luangwa National Park is one of the best places to see elephants in Africa. This wildlife sanctuary may not have the largest elephant population, but it does have a high concentration of elephants and other wild animals.

Sightings are common near the park’s scattered islands, as elephants swim from one to another to cross the Luangwa River and drink its water.

Visit One of Many Destinations to See Elephants in Africa 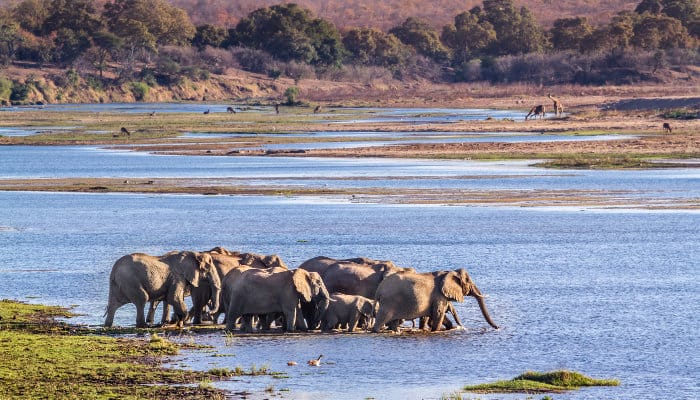 From Chobe to the Okavango Delta, Africa is home to the most beautiful elephant herds in the world, as well as other amazing African bush animals.

From walking safaris to game drives through the wilderness, you can see elephants in any of the parks listed in this post. It’s an experience to be enjoyed and respected, as the animals roam their natural habitats.

Looking to experience this wonder in Africa yourself? Take a look at our deals for African safaris and discover the continent’s wildlife in reality. 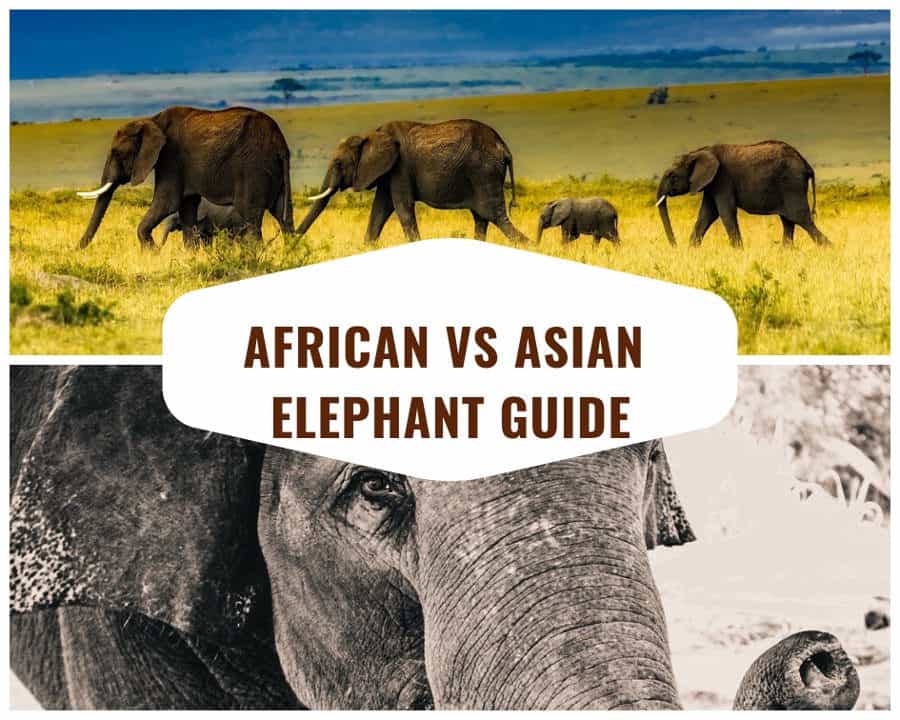 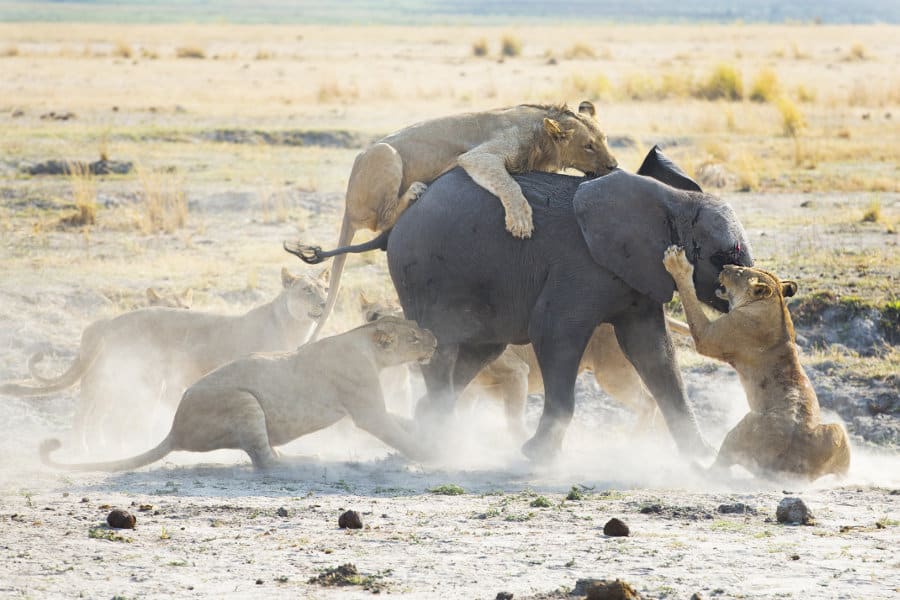