The duiker finds itself caught between a thicket and an open space.

It is one of Africa’s most abundant antelopes. 22 different species of duiker duck and dive to safety all across the continent.

Duiker means “diving” in Afrikaans. It’s the perfect name, because this antelope spends most of its days diving to safety in high grass and thickets.

Here is the full story on the duiker’s daunting day to day battle for survival on the African savanna.

A Small Antelope Hunted by Many 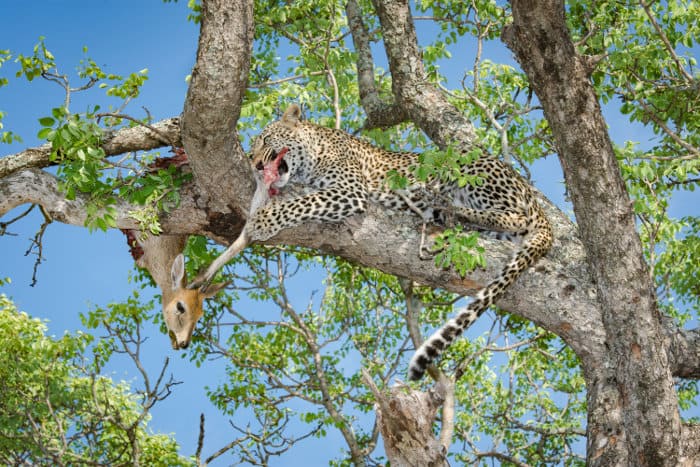 These are small antelope. Unlike some of the largest antelopes in Africa, duiker take a prominent position on a long hit list of predators.

These predators range from silently slithering pythons, to eagles that soar and swoop down through the sky. Not only do big cats hunt duiker, this antelope is on the dinner menu of smaller cats as well.

Even worse, humans hunt them for their horns, meat and furs. This continues at unsustainable rates, contributing to the animal’s status as an ever-dwindling species.

An antelope hunted from all angles

Put simply, the duiker has few places to hide where it can feel truly at ease. Fatal danger looms from the skies and the land in equal measure.

Even the waters have the possibility of becoming a source of great consternation, because duikers are also devoured by crocodiles. These reptilian landlords of the African rivers rank them as a palatable dish and lurk around the shallows where the antelope drink.

So how has this animal reached a point where mere existence is an uncertainty? How does the duiker survive when it is food for so many?

22 Species of Duiker in Africa

At first glance duiker bare more than a striking resemblance to their antelope cousins. While all the species have a smooth and sleek shape, there are many slight and subtle variations between species.

There are 22 different species, with sizes ranging from the dainty 3 kg blue duiker, to the whopping 70 kg yellow-backed duiker.

This huge range makes it difficult for a novice to distinguish different sub-species purely by their physical appearance. Duiker range from rodent-sized-beings to large elegant antelope as big as most people.

How does a duiker choose its habitat? 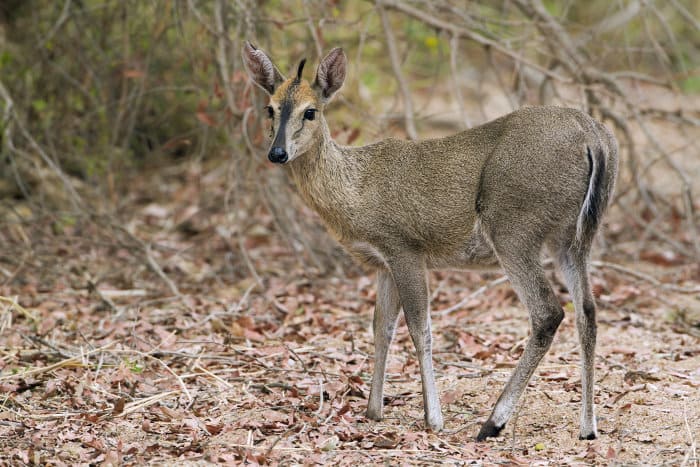 Habitats meeting a duiker’s satisfaction are tactically selected. Every one of these antelopes desires:

They enjoy a sense of safety and security in labyrinthine bushes scattered between areas of open space.

Duikers create their own foliage-filled fortress. So when predators approach they can duck and dive to safety. Predators simply cannot negotiate dense shrubbery like they can.

The key to their survival is this choice of habitat along with a life of evasiveness. Being the preferred dish of an array of African predators, duiker must tread carefully whenever they graze on open space. They never venture too far from the safe cover offered by the tangles and weaves of thicker bush.

How do duiker avoid predators?

Duikers have no means of attack against predators. They don’t have sharp horns or a dangerous kick. All they can do is run and hide, duck and dive.

Their evolutionary design is perfect for this. They have a very low centre of gravity and long, slender, piston-like legs. These legs can kick off and bolt in any given direction at the slightest hint of danger.

The duiker can duck, dive and dip its way to safety thanks to its flexible and responsive limbs. This incredible agility makes them the dodgeball champions of the African forests and plains.

Male duiker do have short stubby horns. However, the two points protruding from its forehead are nothing like the incredible horns on some of Africa’s most elegant antelope species.

Why? Well, the last thing a retreating duiker needs is a spear-length horn getting caught in the vegetation. Such a disaster would leave its rear exposed to any predator with a taste for meat.

A shy and solitary animal 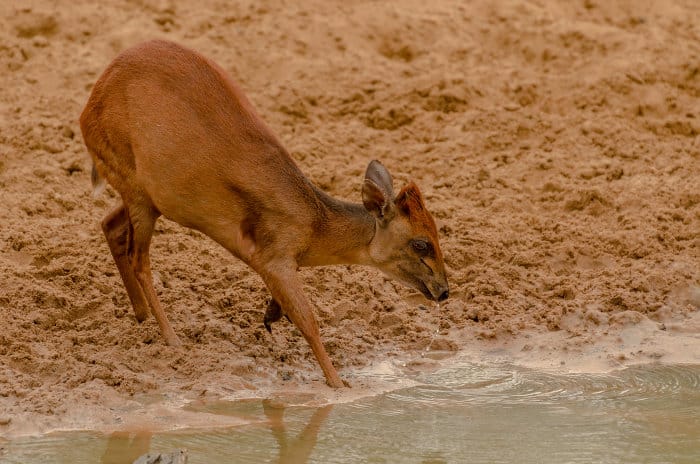 The duiker is a solitary being which prefers a life of self-enforced seclusion. While many antelope live in herds, these dainty creatures rely on their own skills and smarts to live.

This African animal is rarely spotted in herds or groups. The only time direct contact with others of its kind is deemed necessary is when it’s time to mate. During mating season, males will also protect a territory and ward off the aggressive advances of other males.

A male is always seeking an upgrade to a superior territory. However, it’s rare that battles over territory take place. Duiker remains shy and solitary at almost all times.

Instead of physical confrontation, duikers secretes a special liquid from their pre-orbital glands. This communicates a message to rivals, warning them off a territory.

Only if this attempt to avoid confrontation falls on a deaf nose, do duiker horns become two short daggers ready to battle. 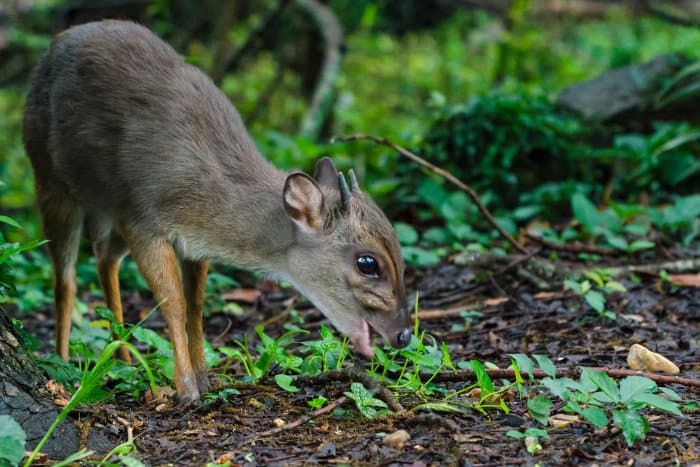 Predominantly a herbivore, the duiker loves nothing more than an early afternoon munch on fruits, seeds and insects. It is both a browser and grazer, an antelope that spends most of the day chewing on shrubbery and greenery.

Being a lover not a fighter, duiker will go to great lengths in the earnest hope of scavenging leftovers dropped or discarded by other animals. They spend some of their time following flocks of birds and troops of monkeys, picking up the scraps that these animals drop from the treetops.

All duikers are omnivorous and if the opportunity arises, a nearby insect or a small bird can also be on the menu.

Another secret to their survival is the ability to live without water. Most animals need to live within easy reach of a water source. Instead of drinking, these antelope take most of the water they need from the vegetation they eat.

This ability to survive without water helps them graze and browse in areas where predators cannot venture. All their predators need to drink, so the duiker are one of very few animals that deliberately choose to live far away from water.

Many Duiker Species are Endangered 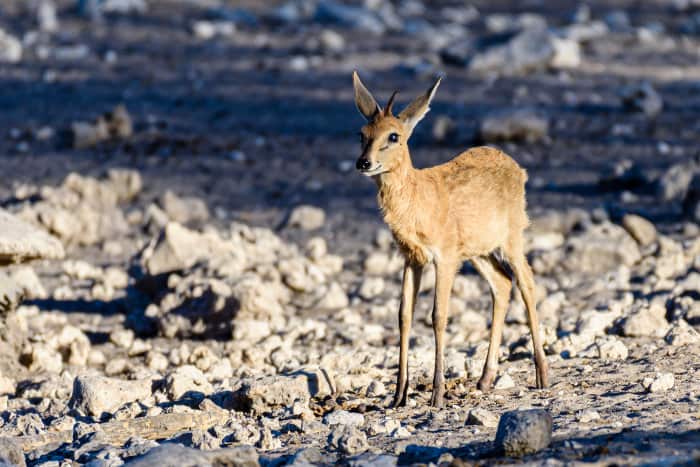 While the duiker can duck and dive its way to safety, their numbers continue to dwindle.

Regardless of its evolutionary advantages and adaptability to dry surroundings, these animals find themselves on the precipice. Some duiker species are staring at extinction if drastic measures are not taken to protect their dissolving number.

So, now you’ve been treated to this short but sweet introduction to the duiker, what do you think about its plight? Shouldn’t this peaceful, intriguing creature be left to survive and even thrive?

Isn’t it time you made the duiker’s acquaintance? They are one of the most wonderful animals you can encounter on an African safari. And if you can’t make it to Africa, spread the word about these remarkable animals.