Can a lion climb a tree?

When you mention climbing trees, lions aren’t the first of the big African cats that come to mind.

Leopards are the great tree-climbers, aren’t they? They drag prey up into the heights to keep it safe from other, stronger predators.

Lions are better known for lazing about under trees, especially in the heat of the day. As with most rules, however, nature always throws a curveball.

In this case, the answer to the question of whether lions can climb trees is not as straightforward as you might imagine. 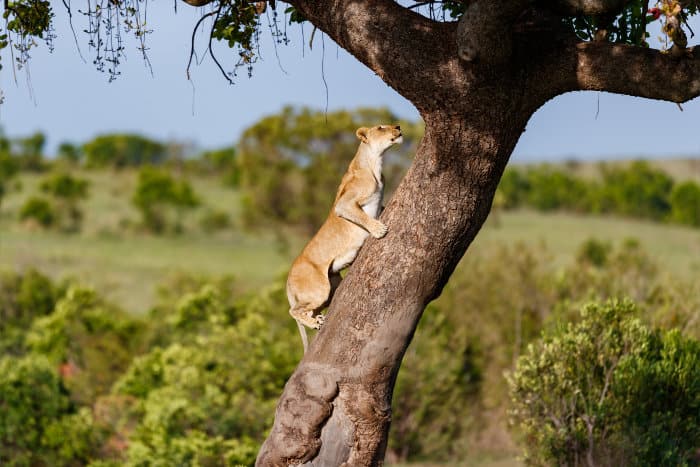 In another word, no.

Let’s explain: Whether or not a lion can climb a tree is a matter of fact. Yes, it can.

Whether or not lions choose to climb trees is another matter altogether. For the most part, no.

Lions are large, powerful animals. They are heavy. Male lions can weigh more than 180 kg and hauling that bulk around is hard enough without having to go vertical. That’s just too much effort, one might imagine.

And yet, reports of lions seen in the branches of trees have been increasing. There are even specific prides of lions showing an increasing penchant for engaging in this behaviour.

Wait! There Are Tree-Climbing Lions?

There are a number of places in the Serengeti and sub-Saharan Africa reporting prides or coalitions of lions regularly seen hanging around (excuse the pun) in trees.

These aren’t special tree lions. They aren’t a particular subspecies or superstrain of mutant lions. These are ordinary lions that for one reason or another (theories below) have decided that they like to climb trees.

Do They Learn This Behaviour? 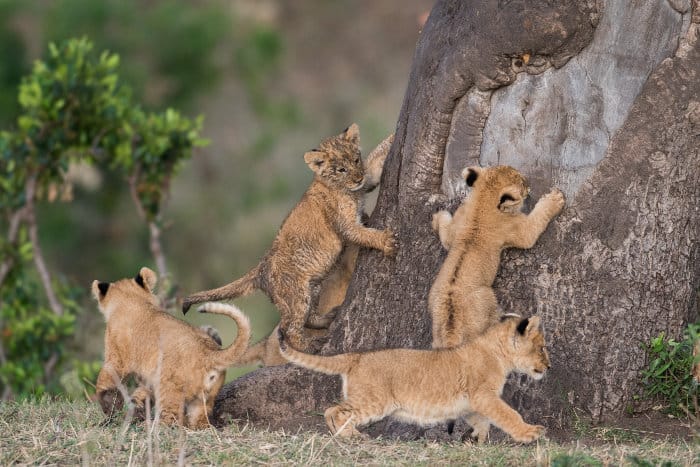 If a pride is exhibiting this behaviour, it is reasonable to assume that any cubs born to it will learn it, too. Cubs like to play and follow their adults in whatever they do.

So, yes, in some respect, this behaviour will probably pass on from generation to generation.

It’s more difficult to say why these lions started behaving this way, though.

One can only assume that, like the first human who discovered fire, a lion accidentally walked up a tree while half asleep one morning, and liked the view. That’s just a theory.

Are They Good At It?

Those who have witnessed it have described a lion climbing a tree as awkward, and even hilarious. Lions have real difficulty hoisting themselves up into the heights, as mentioned.

The real entertainment starts when they descend. It’s apparently easier going up than it is coming down. Often, inexperienced lion tree climbers are unsure whether to go head first or lead with the rear, so to speak.

In basic terms, it’s because they’re not built for it. Contrast the lion’s powerful, bulky build with a leopard’s. Leopards have strong back legs, muscular backs, and a comparatively smaller, more flexible body, making climbing infinitely easier.

So, Why Does a Lion Climb Trees? 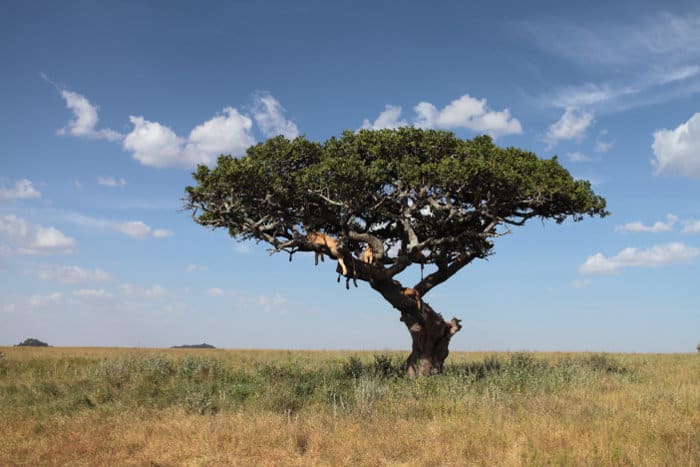 Experts offer a number of theories as to why this is happening.

Some say they’ve discovered that it’s cooler in the tree than on the ground. Others suppose that it could be to avoid wet ground and grass (who likes wet feet?).

Others still say that the behaviour mimics that of a typical cat, which likes to have an elevated view of its surroundings.

A few experts put forth that they climb to avoid the armies of insects that irritate them on the ground. They do seem annoyed by buzzing flies, to be fair.

Failing any better theories, we must assume that all of these might be at least partially correct.

It seems unlikely that a lion would climb a tree just for the fun of it. Even so, when they do climb, they will only venture onto the lowest and strongest branches.

Where Can One See Lions in Trees?

There are a couple of places where prides exhibit this behaviour regularly, and where you can potentially see a lion in a tree. 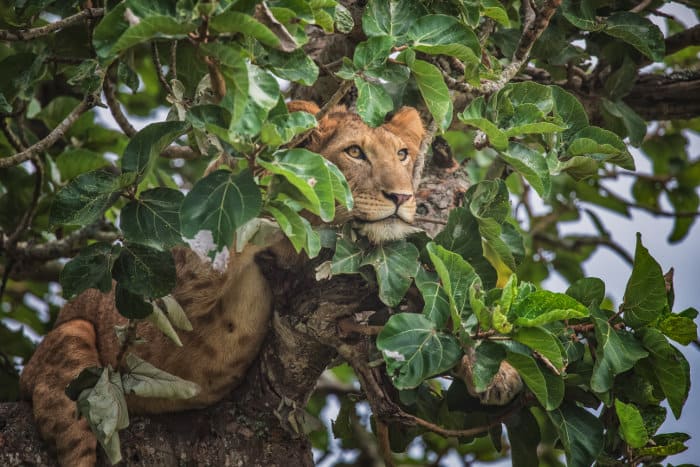 The most famous tree-climbing lions live in the Queen Elizabeth National Park in Uganda. This probably has to do with the many suitable African trees present here – they are likely more able to accommodate this behaviour.

It could also be that there are just so many lions here, you just happen to see more of them more often, especially during the rainy season.

Rangers have reported that a particular pride of lions has started exhibiting this behaviour in South Africa’s biggest national park. Visitors see these cats mostly around Crocodile Bridge Camp in the Kruger.

There is also the particularly famous story of a lion pair climbing a tree to steal a leopard’s kill at Londolozi in Sabi Sands. An intrepid videographer captured this on video. 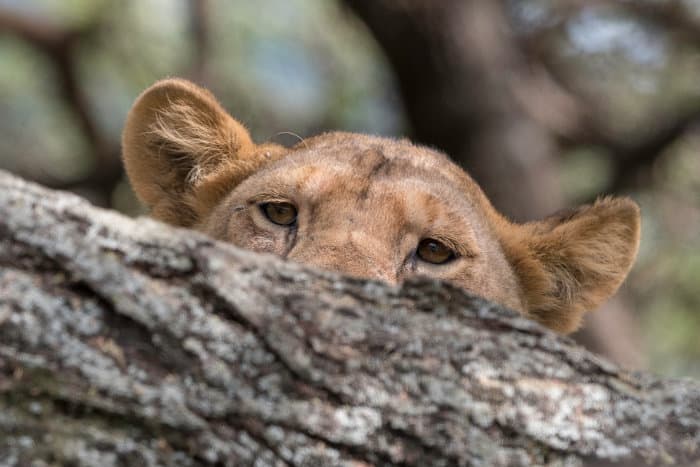 The lions here seem to really like the acacia trees of the region. In fact, Lake Manyara is where lions seem to make it an almost daily habit – part of regular life.

Often, they will spend much of a day in the trees, only coming down at night to do lion-ly duties like hunting.

They do it so much here that they have reportedly become rather good at the whole thing.

Best advice: climbing a tree to avoid a lion in Tanzania may not be the most adequate course of action. On the other hand, lions can run faster than you, too.

Everyone Wants to See a Lion in a Tree

It’s well-known that lions are the pride of Africa.

And they are a thrilling sight to see in the wild, especially since efforts to conserve their slowly dwindling populations depend on funds generated by safaris. It would be even more amazing to catch a lion in a tree, unusual as it is.

One great way to check out these amazing tree-climbing lions is to book an awesome safari deal and give ourselves the chance to see them in their natural habitat.

2 thoughts on “Can lions climb trees? Why they might, and where to see them do it”