If you ever come across a hyrax on your travels, this small furry African mammal will fascinate and entertain you to no end.

Various communities refer to them as dassies, rock badgers, rock rabbits, and coneys (though a coney is actually a different animal, more about that later).

Hyraxes are simultaneously intimidating and cute.

They wander about on rocks and cliff faces, in trees, and through bushland, seemingly observing human movement around them.

And they look rather fierce yet never seem to act aggressively.

While they look like rodents, hyraxes are mammals from the Hyracoidea order. They are seldom dangerous unless confronted.

But don’t think about taking a hyrax as a pet. Beware, they can bite.

What is a Hyrax Animal? 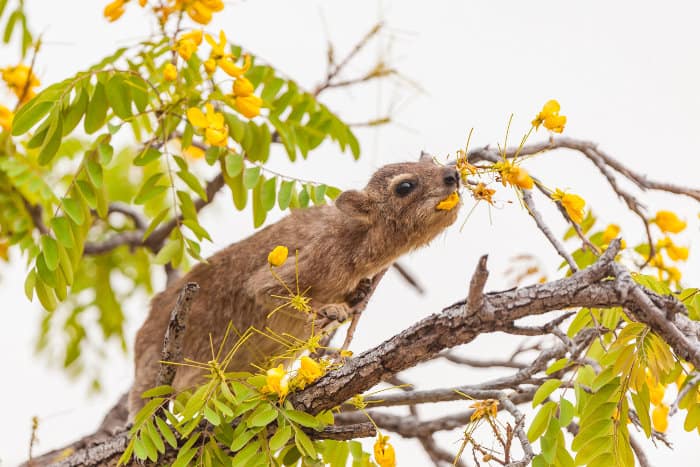 For those wondering ‘what are hyraxes‘, they are small terrestrial animals that you can find nibbling on fruits and leaves in Africa and the Middle East.

You’ll often see them living life on rock formations or chilling in trees, and they’re full of surprises.

When it comes to the appearance of hyraxes, animal features like an oversized guinea pig or rabbit with rounded ears may come to mind. They sport dumpy bodies and plump heads that add to their rodent-like appearance.

A hyrax is a furry animal with round ears as well as a short tail and neck. They have short, slender legs with stumpy toes and hoof-like nails.

18 Hyrax Facts That Will Surprise You

Although you’re unlikely to have a pet hyrax, there are many intriguing things to learn about these cute creatures’ behaviors in their natural habitat.

Let’s take a look at the surprising hyrax animal facts.

1. There’s more than one type of hyrax 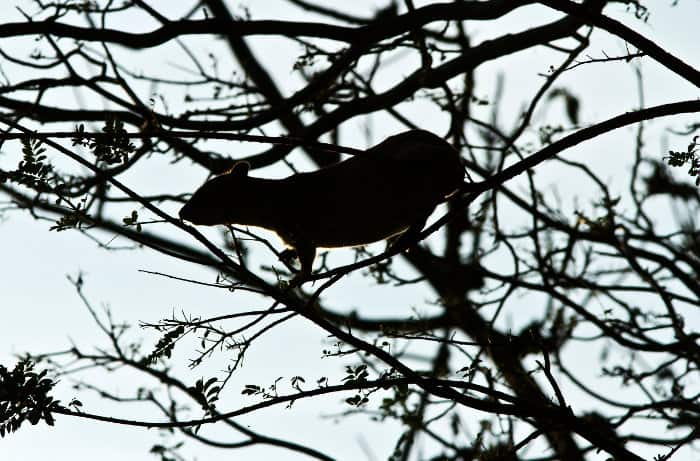 There are three main species of hyrax: the rock hyrax, the bush hyrax, and the tree hyrax.

They live all over the African continent and in some parts of the Middle East, including Jordan and Lebanon.

They are also very adaptable and colonize at sea level along coastlines or at high elevation without much difficulty.

They don’t mind a range of climates either, though they do need the sun to keep warm. So you can find these rock badger animals on the dry plains as well as in the wetlands.

Their closest genetic relative – in terms of species – is the elephant.

Hyraxes have tusk-like incisors, which grow throughout their lives. This also makes them a relative of the manatee. 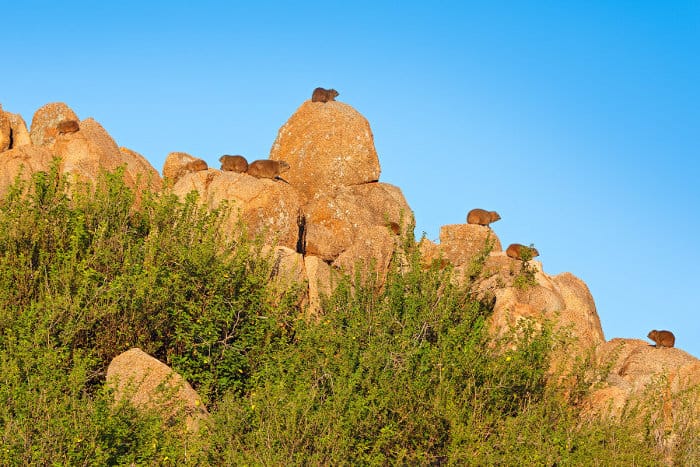 Rock hyraxes (Procavia capensis) are common in East Africa. Though it’s sometimes difficult to tell species apart, the rock hyrax is generally gray or brown and has a blunt nose.

They also have a dorsal gland covered by black, yellow, or orange hair. The dassie animal uses the gland to mark territory with a unique scent.

Rock hyrax can grow quite large, and live in colonies, sometimes 50 to 100-strong. You’re likely to see these dassies sunbathing on rocks on cliff faces.

This is because their own bodies struggle to generate heat. So they are a lot like meerkats in that they seek out the sun when they can.

One of the most interesting rock hyrax facts that scientists have discovered is that they have a particular order of communication.

Males especially put together a range of different sounds to create a “song”. These sounds appear together in a quite specific order every time, suggesting a language that uses syntax.

So the songs will always use the same sounds in the same order. Here’s the mind-blowing part. Hyraxes from different regions show differences in “dialect”.

5. The bush hyrax is slightly smaller than a rock hyrax 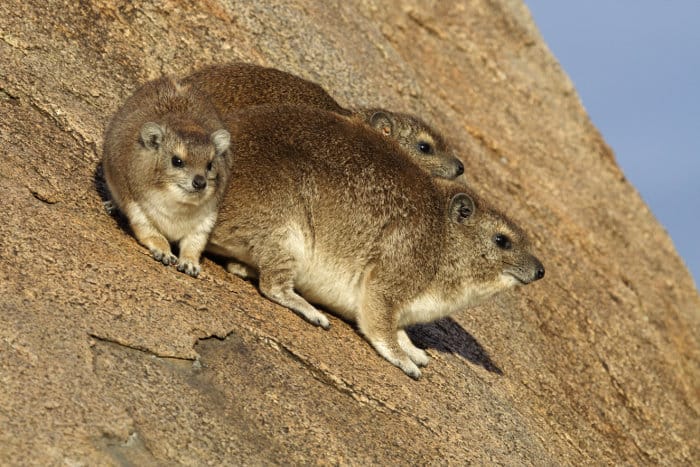 The bush hyrax, or the yellow-spotted rock hyrax (Heterohyrax brucei), is a cousin with similar looks to the rock hyrax.

You can pick out a bush hyrax by the white patch over its eye.

Much like their cousins, bush hyraxes live in colonies, with a dominant male protecting the herd.

They live in rocky areas, preferably with plenty of open space to bask in the sun. The bush hyrax lifespan ranges between 8 and 12 years, on average.

6. The tree hyrax is harder to spot

But because they live in trees and in forest areas, the casual passerby is less likely to see them as often. They are also nocturnal, so they are usually only out when you’re asleep.

Tree hyraxes have longer hair. People actually seek out this hair in some parts of the world. They are also brownish-gray, while their dorsal gland is white or yellow.

Unlike rock hyraxes, tree hyraxes tend to live a solitary life. At most, you may find a mating pair. They live for about ten years.

7. Hyraxes are bigger than most rodents 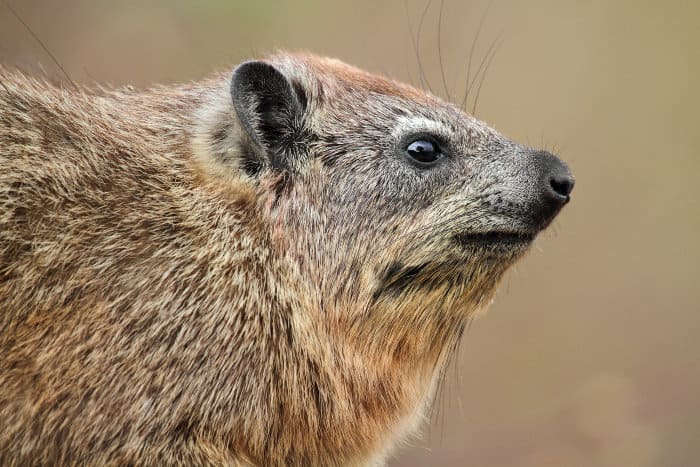 So large ones are bigger than most cats.

8. Hyrax species do not mix

You may occasionally see different types of hyraxes sharing a location, but rock, bush, and tree hyraxes will never mate with one another.

9. Hyraxes are often mentioned as coney animals in the Bible 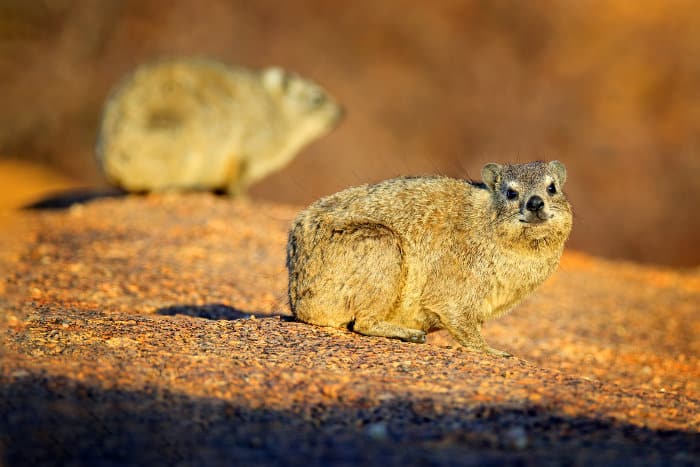 The hyrax appears in the Bible more than once, though by a different name.

We now know that the Biblical “coneys” were not what we now know as coneys, a completely different species. For whatever reason, what they called coneys was more likely hyraxes.

They are gregarious, and ‘exceedingly wise’, says Proverbs 30:24. They are also not suitable for eating, according to parts of the scripture.

The observers who refer to the hyrax in the Bible did notice that hyraxes often move their mouths as if they are chewing.

They thought this was the act of chewing the cud as cows do. In reality, hyraxes mostly move their mouths to make sounds and chatter. They do not, in fact, chew the cud.

Hyraxes have padded feet that secrete moisture to assist with grip. There is also a specialized claw for scratching and grooming particularly tough parts of the skin and hair.

Hyraxes can actually retract the inner section of their pad under their foot, which creates a suction effect for grip. Think of Tom Cruise climbing the outside of the Burj Khalifa with suction cups! 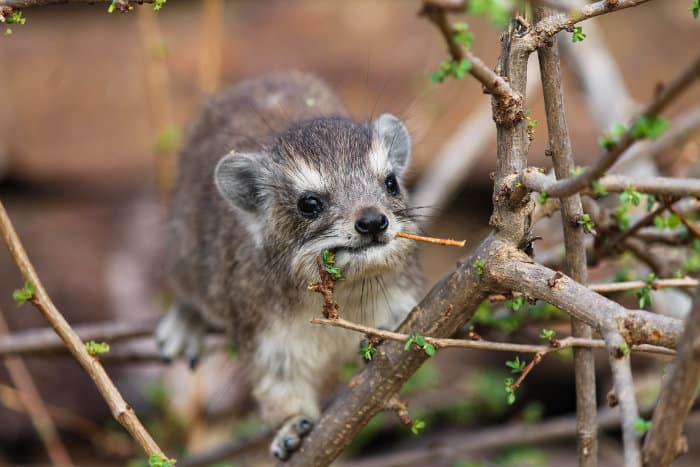 A hyrax stomach has three chambers.

It also contains bacteria that assist with the breakdown of food.

For us it’s gross. But for the hyrax, it’s essential to survival.

Hyraxes do not have the necessary bacteria in their stomachs to digest food when they are born, they will only develop it later. To compensate, baby hyraxes will often eat adult hyrax excrement to obtain it.

13. Hyrax poop has other multiple uses 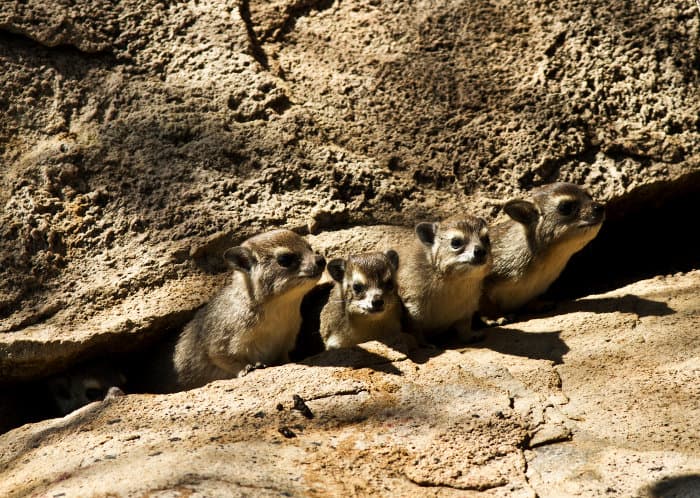 Perfume makers still use elements of the hyrax waste today to create a sort of musk – apparently, it is quite useful for fragrances. The extract from the urine and feces used to create this is Hyraceum.

Another quirky kind of natural medicine is elephant dung – as it has many uses as well, you could say healing benefits run in the family.

14. A baby hyrax stays in the womb a long time

Hyraxes have an unusually long gestation period for their size – around 6 months. The litters consist of two to four at a time. Babies are quite well-developed at birth and can eat solid food after two weeks.

They can walk, run and even start jumping just an hour after birth. So they are almost born on the run. A hyrax becomes sexually mature at about 16 months. 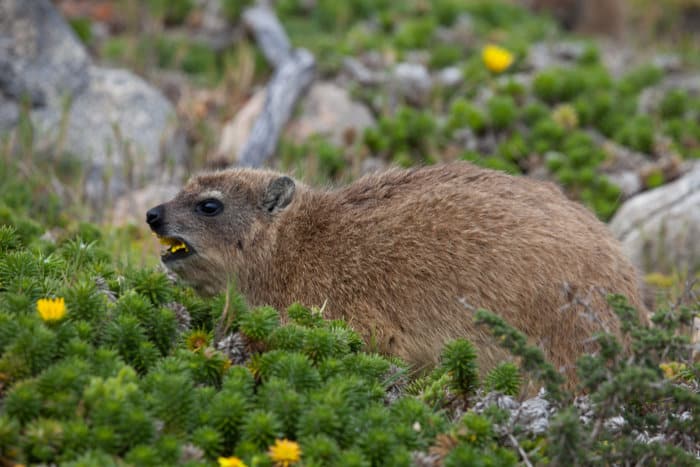 What do hyraxes eat?

They feed on mostly grasses, plants, fruits, and small critters like birds or lizards.

They also seem to have a liking for the occasional bird’s egg. And they are not averse to scratching around in trash cans should the opportunity arise.

Odd as it may seem, hyrax colonies actually demarcate particular spaces for toilet areas. There are specific places – usually under rocky ledges – where these animals deposit urine and feces.

Generations of the colony use the very same spot over thousands of years, which has offered fascinating insights into the lives of hyraxes over time.

Just another weird hyrax behavior, perhaps, but it has helped us study environmental change. 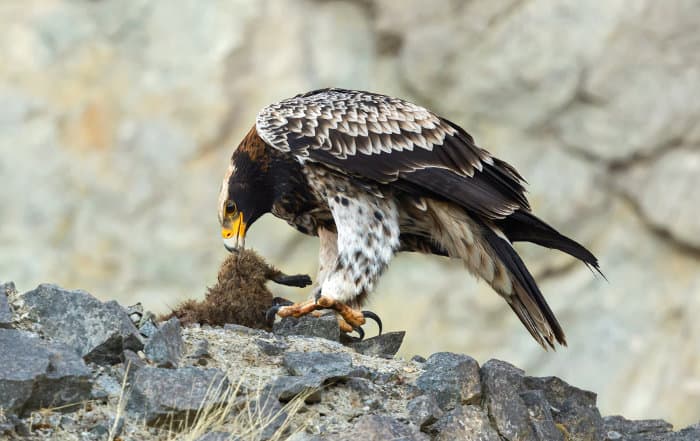 In the wild, eagles, lions, leopards, and other larger predators feed on hyraxes. Hyraxes can be fierce biters, though, so they’re not the easiest of prey. The Verreaux’s eagle feeds on hyraxes almost exclusively.

18. Having a rock hyrax pet is dangerous

Much like most undomesticated animals, hyraxes prefer living in their natural habitat.

Keeping wild animals as pets is dangerous for many reasons, including health risks and struggling to adapt to living in a home with humans.

So Spread the Hyrax Love 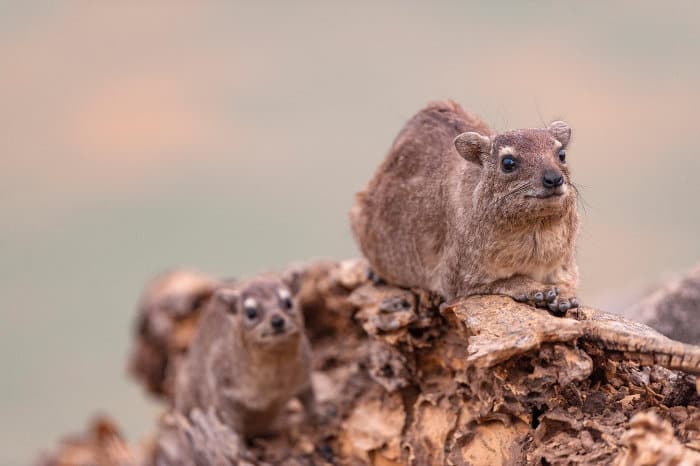 Hyraxes aren’t shy of cameras, especially on a sunny day. Many also have an amusing expression somewhere between irritation and annoyance. On such a cute face, it’s hard to resist falling in love.

Now that you know where hyraxes live, hopefully, you’ll encounter one the next time you take a safari trip with your loved ones.

The appearance and behaviors of these fascinating critters are best appreciated up close. So check out these safari deals, book your tickets, and snap a shot of the African hyrax.

3 thoughts on “Hyrax: 18 amazing facts about this coney animal”