Wildebeest roam the plains all over Africa. You’ll often spot them grazing alongside eye-catching zebras, Thomson’s gazelles, and other herbivores.

What you might not know is that wildebeest, also known as gnu, come in two separate species – each with different striking characteristics.

The first is the blue wildebeest, also known as the brindled gnu or white-bearded wildebeest. The second being the black wildebeest, aka the white-tailed gnu.

Carry on reading to discover more about black wildebeest vs blue wildebeest. 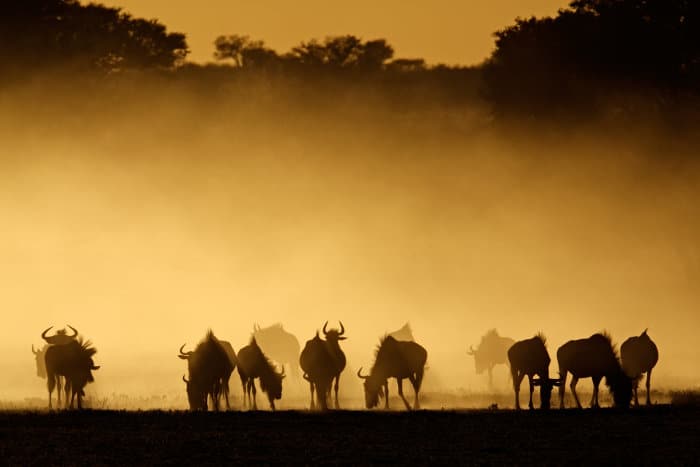 Both gnu species belong to the Bovidae family, which also contains sheep, goats, antelopes, cattle, and other even-toed ungulates. Its closest relatives are the hirola, hartebeest, and some of the fastest antelope species, such as topi and tsessebe.

According to fossil history records, these two species diverged over a million years ago. Each species claimed a different geographical region, resulting in a northern and southern type.

The name wildebeest is Dutch for ‘wild cattle’ or, you may have guessed, ‘wild beast’. Connochaetes, the genus’ name, stems from the Greek words kónnos meaning beard and khaítē meaning flowing hair. A great hint as to their general appearance.

The word gnu is more controversial, with some sources saying it stems from the Khoekhoe name for the animals, t’gnu. Opposing sources claim that the word derives from the San people’s name for the black wildebeest, !nu.

Dutch settlers first saw wildebeest in the 1700s as they trekked to South Africa’s center. A century later, westerners in north South Africa stumbled upon the blue wildebeest.

In the early 20th century, there was confusion relating to the wildebeest races. At one time, many saw them as separate types. At another, people regarded them as one species.

In the mid-20th century, those in the know recognized them as two different species, G.t. albojubatus and Gorgon taurinus hecki. The blue and black wildebeest were the final result of this back and forth.

You now know about the history of the wildebeest and a few of the differences between the black and blue wildebeest species. Now, take a look at these interesting facts about the two species’ diet, appearance, living habits, and habitats.

What do wildebeest eat? 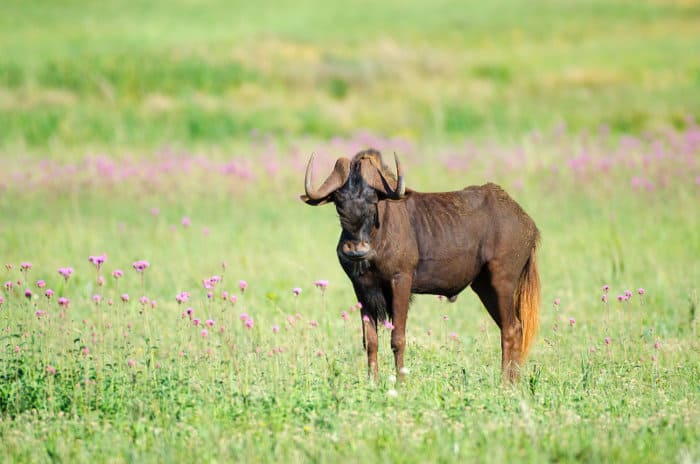 Both wildebeest species are grass-munching herbivores. The blue wildebeest predominantly sticks to short grasses, which usually grow from light, alkaline soils on the plains and savannah grasslands. They feed day and night and when grass isn’t available, they will happily eat shrub and tree foliage.

Black wildebeest have similar eating habits to blue wildebeest, sometimes eating shrubs when grass is scarce. Water is essential for both species, which is why you’ll often find them in areas with easily available water sources.

Both wildebeest types have interesting dining companions. You will frequently find wildebeest associating with plains zebras as they collaborate in grass matters.

You see, zebra eat the upper, less nutritious layer of the grass canopy. This exposes the lower, tastier grass that the wildebeest prefer.

Both wildebeest species also act as restaurant buffets for the agile cattle egret. These birds pick out the ticks and insects hidden in their hides to get a good meal.

As herbivores, both species are also the targets for Africa’s top predators. Their major predators include fierce lion, cunning hyena, wild dogs, and rare cheetah.

As mentioned, the blue wildebeest is larger than its black counterpart. However, there are other differences between these two groups of gnus.

The blue wildebeest’s horns protrude to the side, curve slightly downwards before turning up back towards the skull. Make a gun shape with your fingers and place the tips of the index fingers against the sides of your face and you’ll get the idea.

Their “blue” and “black” namesakes hint at their difference in coloring. The blue gnu tends to be a dark grey with textured stripes and even a bluish sheen. Black wildebeest have brownish hair with a mane that ranges from black to cream and a sweet cream-hued tail.

Both species are similar in that they have heavier forequarters compared to their hindquarters and both sport impressive roman noses.

What is the size of a wildebeest? 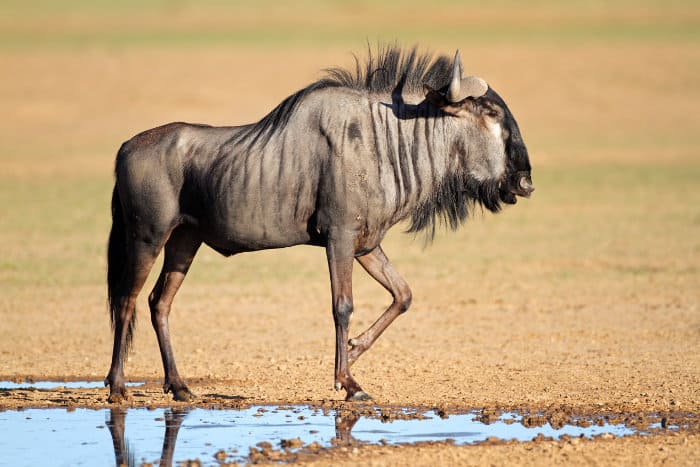 You know the answer to “what does a gnu look like?” Now, let’s size them up.

Male blue wildebeest stand at about 150 cm tall (average shoulder height) and females reach 135 cm. Black wildebeest come in a little shorter with females being 108 cm tall and males being between 111 and 120 cm tall.

What is the geographic range of a wildebeest?

Blue wildebeest are one of the most abundant big-game species in East Africa. Some blue wildebeest populations embark on the annual great migration, where you can see over 2 million animals make their way over East Africa. They have both migratory and sedentary gnu groups.

Blue wildebeest are widespread and evident in private game farms and reserves all over Africa. They are native to:

Conservationists estimate the blue gnu population to be over 1.5 million. They are a species of least concern according to the International Union for Conservation of Nature.

Black wildebeest are nomadic and often have a demarcated home range. The males may have territories between 100 and 400 m apart. The distance can vary depending on the habitat quality. Female black wildebeest have home ranges about 100 ha in size.

Hunting almost completely wiped out their natural populations, in southern Africa in the 19th century. Hunters sought them for their meat and hides.

Fortunately, several parties reintroduced the species from captivity, both in game reserves and private concessions. These reserves exist throughout Lesotho, South Africa, and Swaziland. They also roam outside their natural range in Namibia and Kenya as a result of reintroduction.

What are gnu/wildebeest living habits?

Both black and blue gnus are active in the early morning and late afternoon, preferring to miss the hottest hours of the day. Both species can run at a speed of 80 km/h. This puts them on par with a lion’s speed, making it a life and death race between predator and prey.

Both species have territorial bulls. Blue gnu bulls demarcate their territory boundaries with scent gland secretions and strategically-placed dung heaps. Black and blue wildebeest males will use body language to assert their authority with:

In both species, a challenge between two bulls involves an elaborate ritual. The males approach one another with heads lowered. They follow this gesture with movements, like standing at a reverse-parallel angle, where one male urinates and the other sniffs and conducts a flehmen response.

They may then repeat the ritual, taking opposite roles. The two bulls may also toss their horns at one another, dismissively look away, or circle. After this, the fight begins and can vary from low intensity – a light bashing of the horns – to a high-intensity battle.

What is the habitat of a wildebeest?

You’ll find blue wildebeest residing in a variety of habitats, including grassland and woodland. The black wildebeest, on the other hand, like to reside purely in open grassland areas.

Blue gnus may migrate in winter, traveling over long distances whereas the black wildebeest does not. 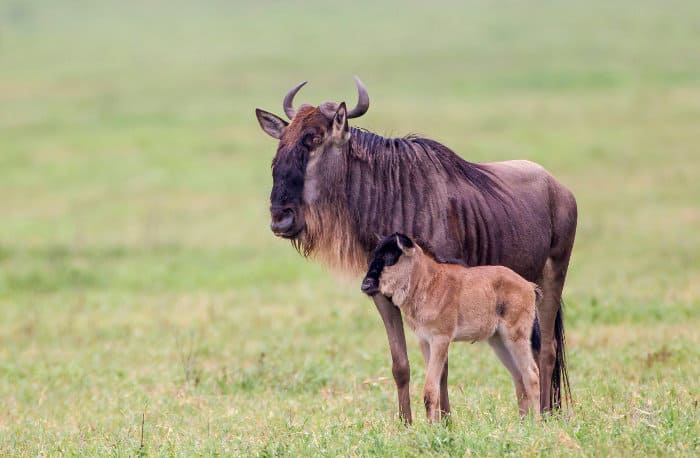 You know the facts about these adult “wild beasts”, now to learn a bit about their cute babies. Let’s take a look at these baby wildebeest.

Females give birth to baby wildebeest after an eight and a half month gestation period. They usually give birth to one calf at a time. The calves learn to walk quickly. They have to be mobile to stand a chance at survival in the face of the savannah’s predators.

Blue wildebeest are born a tawny brown color. At two months old, they begin to take on the adult dark grey hue. Black wildebeest calves have fawn-colored shaggy hair and males are darker than females.

A curious difference in the reproduction of these species is the mother’s milk. The female black wildebeest has milk that is higher in protein, lower in fat and lactose than the blue wildebeest. Consider it the Atkins Diet’s version.

Where to See Blue and Black Wildebeest

You’re clued up on the facts of black wildebeest vs blue wildebeest. Now, all that’s left for you is to don a bush hat, grab your binoculars, and go and see them in their natural habitat.

There’s only one way to see them in all their glory, and that’s on safari. Book a customised safari to see these animals for yourself – you won’t regret it! 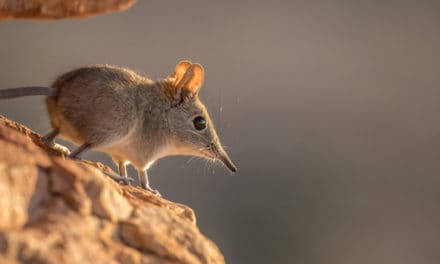 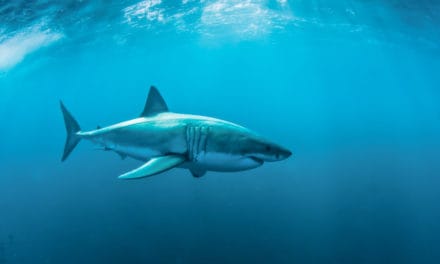 Do sharks have bones? The answer might surprise you