You can’t miss this stunning bird on safari, standing tall with a bristly crown and characteristic facial features. It certainly stands out.

Inhabiting the grasslands, flooded plains, marshlands, and even agricultural land throughout sub-Saharan Africa, the majestic grey crowned crane is a sight to behold.

Many countries in Africa revere this spectacular crane and once you get to know them, it’s not difficult to see why. It moves with elegance and grace, is striking in appearance, and has a host of regal names.

The Crowned Crane is Ancient 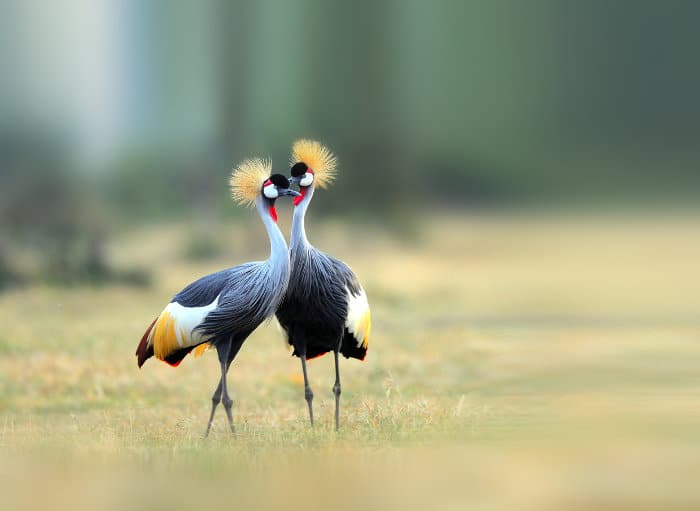 Crowned cranes, both the grey crowned and black crowned species, are the most ancient of cranes.

The species is tens of millions of years old, considerably older than other crane species. There are fossils of the most primitive species of crowned cranes which date back to the Eocene Epoch. That is a staggering 56 to 33.9 million years ago!

Millions of years ago these cranes would have been present in Europe and North America but most likely died out due to cold – which they’re not built for.

An African Crown Fit for Kings and Queens

These birds have a striking appearance and are very beautiful. The crowned crane gets its name from the halo of yellow feathers tipped with black atop its head. Staying true to its royal name, it is a graceful creature, moving with determined and dignified steps on the ground and slow wing strokes in the sky.

The male and female cranes sport the African crown. Adults have stunning pale grey or blue irises and a telltale white patch on the cheek. The rest of the crane’s body is grey with almost completely white wings. 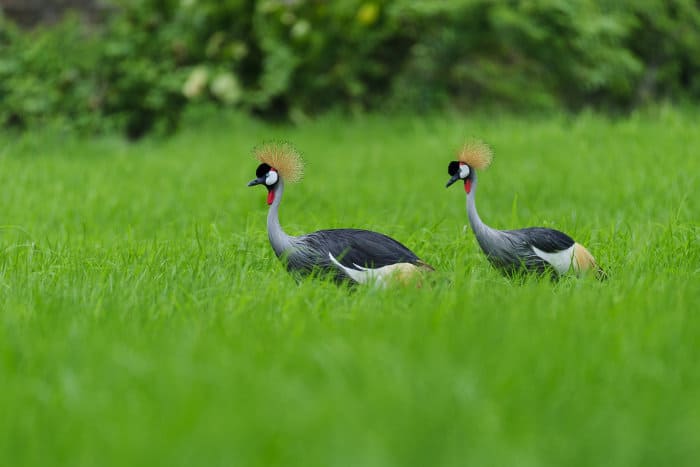 This majestic bird is the national bird of Uganda. You can spot it on the Ugandan flag and coats of arms. The bird is a source of national pride and a symbol for the country.

Uganda is the perfect habitat for the grey crowned crane. The birds love to make a home in grassland environments close to water. Uganda is a treasure trove of lakes, rivers, and marshes. These wet grasslands are the ideal environment for the national bird.

Despite being the national bird of Uganda, the biggest portion of the dwindling global population is in Kenya.

The grey crowned crane is also revered throughout southern Africa. The ancient crane is a sacred symbol in Kenya, Namibia, Zambia, and South Africa.

This might have something to do with the belief that these birds are responsible for calling on rain. Southern Africa often suffers droughts and dry spells. So, when locals perform rain rituals, pictures of the crowned cranes often feature. 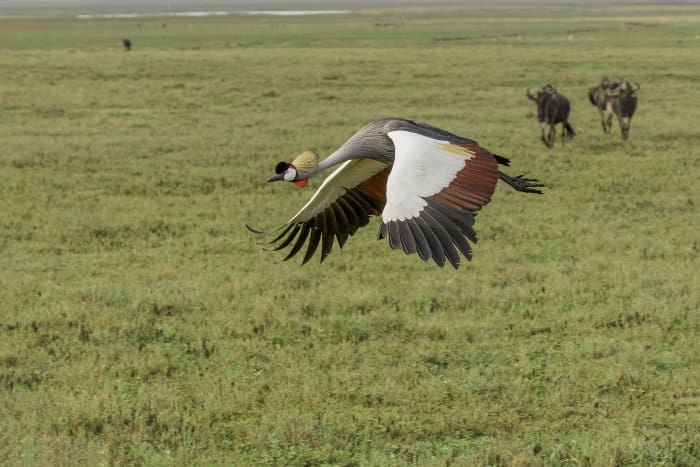 In the southwest of the continent, the South African crowned cranes roam southern Angola down to North Namibia. Towards the east, they dwell in Botswana and Zimbabwe and finally, in South Africa too.

You might think that the male’s spectacular golden crown would be enough to impress a mate and spark a romance. However, it’s not all about looks; rhythm plays an important role, too. As is common with many birds, there is a whole breeding show.

These cranes perform dance-like steps, bowing, jumping, and moving their feet in a breeding display. Alongside the dancing, the males emit a low booming call and inflate their red gular sacs. It’s a wonderful, fancy-feet attempt to attract a female.

Dancing is intimately connected with courtship. However, it’s also something that happens all year round by both male and female cranes of varying ages.

The sing-song twitter of bird calls is a wonderful thing to wake up to in Africa. Yet, this is not what you’ll hear from a grey crowned crane.

Rather, a loud honking nose more familiar with a farm animal is the call of these cranes. It is a trumpeting ‘may hem’ flight call that is quite distinctive.

The cranes also emit a soft, purring sound to announce their location to flock members or in reassuring response to a shrill call from their chicks.

These unusual sounds, which differ from other crane species, is due to the lack of folds in the crested crane’s windpipe.

The striking appearance of these grey cranes has resulted in them becoming a symbol of status. Alongside this, many believe that the eggs and feathers have special medical benefits.

This has caused humans to become the single greatest threat to the grey crested crane population. Poaching and illegal trade has severely affected the population. And in some ways has even changed the behaviors of the birds.

The cranes sometimes leave their chicks unattended and neglected. They have become preoccupied with keeping a watch out for humans rather than tending to their young.

On top of this, the crane’s habitats suffer destruction at the hands of agriculture. Fertile grasslands become farming fields and contamination by pesticides is poisonous to these birds. Intentional poisoning is also a problem as farmers kill these creatures to protect their crops.

Kenya, South Africa, Uganda, and Zimbabwe have created laws to protect the grey crowned crane. And many community-based projects are underway to save the cranes in Rwanda and other countries. 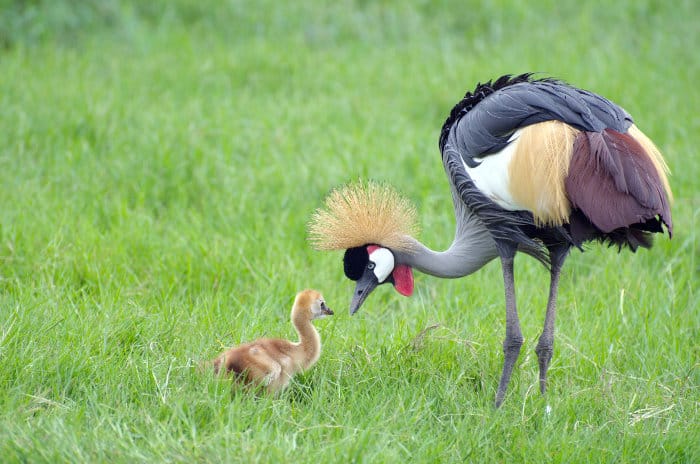 Usually, the nests are around 50 to 86 cm in diameter and tower 12.5 cm above the water level.

The grey crowned crane will rarely nest in a tree, and although it’s not a common phenomenon, sometimes they will hijack tree nests from large birds.

In fact, it is the only species of crane, along with the black-crowned crane, that can make a nest in trees. The crowned cranes have a long hind toe which comes in handy for latching onto branches.

Strangely, the most prominent predator of these cranes is the domestic dog. It’s fortunate, then, that they can nest in trees to stay well out of the canine’s reach.

Birds are famous for being loyal and monogamous and these cranes are no different. Once a male snags his mate with the elaborate dance, they’re breeding partners for life. The pair will breed together each year, with about two to four eggs in a clutch.

Both parents are actively involved in building nests and caring for their eggs and young. And both the male and female work to incubate the nest.

Already 12 hours after hatching the chicks are able to swim and are eating after just 24 hours. By day two, the chicks can go on a search for food with their parents. 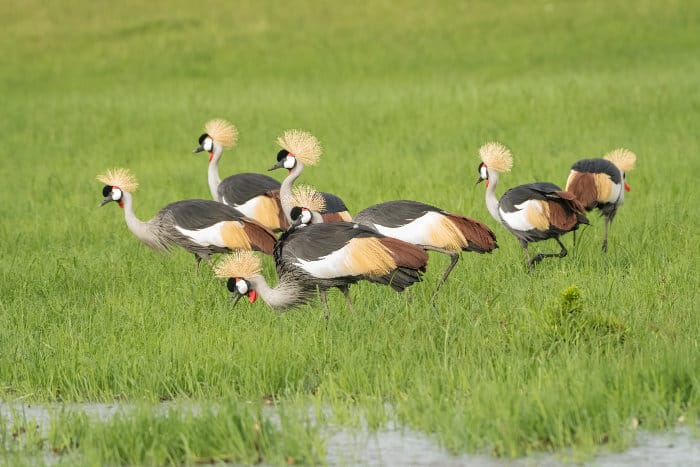 The grey crowned crane spends most of its day foraging for food and stamping their feet to find it. Their omnivorous diet includes grass tips, seeds, and grains. As well as small vertebrates and insects, snakes, worms, aquatic animals’ eggs, small fish and invertebrates.

The cranes stamp their feet while walking to coax insects out of their grassy hiding places.

Oftentimes, the cranes will trail behind larger grazing herbivores, such as zebras and buffalos, who flush out insects as they walk, right into the crane’s mouth.

These cranes have an impressive wingspan of up to two meters. They are adept fliers but need a bit of help getting into the air. Before taking flight, the cranes need to do a run-up to gain some speed and momentum.

Cranes are tall birds. And the grey crowned crane reaches over a meter in height. Yet its tall body and large wings don’t actually weigh very much – only about 3.5 kg. This lightweight frame is due to hollow bones and is imperative for the crane’s ability to fly.

Once they are in the air, they have powerful and steady wing beats.

Witnessing the Crowned Cranes in the Wild 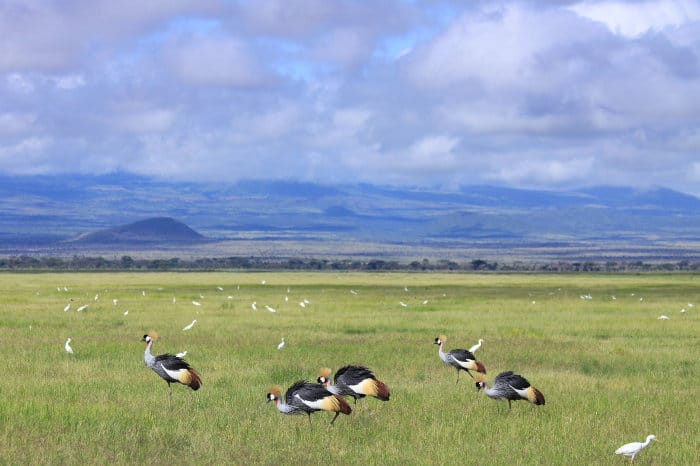 Seeing these iconic grey crowned cranes in the wild would surely be an unforgettable moment. Perhaps you’ll witness them determinedly stamping their feet in search of dinner, or singing their strange calls. Look out for the dance parties during the breeding season and the large nests near the water.

As their population numbers dwindle, the opportunity to spot these beautiful birds does too. Don’t wait too long to book a safari and go in search of the golden crested cranes.