Also known as the Nubian vulture, this solitary bird of prey once inhabited a wide range throughout sub-Saharan Africa.

The number of vultures living in the wild has decreased due to humans. Habitat destruction, hunting, and use of poisons have led the IUCN to list the lappet-faced vulture as endangered.

This large scavenger bird plays an important role in the African ecosystem. It feeds off carrion, animal carcasses, and keeps the environment clean of rotting flesh, which helps to reduce the spread of bacteria.

Read further to learn about the lappet-faced vulture. This guide covers where they live, what they eat, and which threats affect these powerful scavengers. 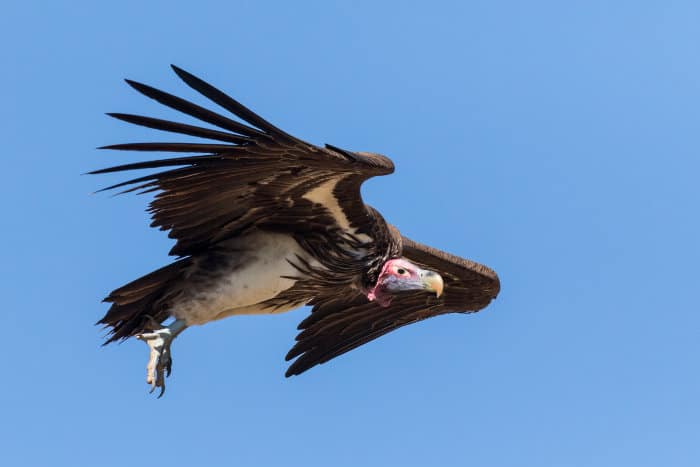 The lappet-faced vulture is larger than the white-backed vulture, measuring in at 110 cm tall. Their weight range is from 4.5 kg to 9.2 kg, making them the second heaviest bird able to fly in Africa – after the kori bustard.

Like many long-necked vulture species, it has a bald head. The coloration of the skin is noticeably more red in South Africa and pink in species around northern Africa. It has black feathers on the back, lined with brown feathers.

The wings have white and black plumage underneath, giving the bird an overall gray appearance. The tail feathers are dark, contrasting with its puffy white legs. Juveniles, however, are brown and lack the white underside and white feathers.

In flight, the size of the lappet-faced vulture’s wingspan is impressive. It measures on average between 2.5 m and 2.9 m in length.

Do Vultures Live in the Desert? Habitats Across Africa 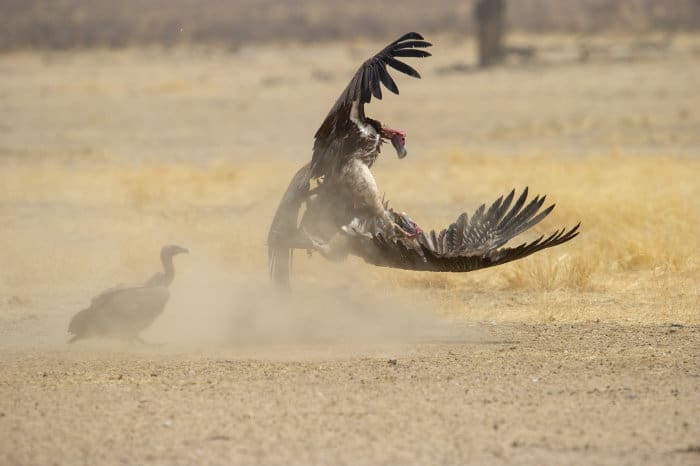 The species lives in much of Africa and favours desert, dry savannah, arid plains, or open mountain slopes. Deserts are an ideal habitat for the lappet-faced vulture who prefers large areas of open land with minimal grass cover.

Three subspecies of lappet-faced vultures exist. All three live in similar habitats despite being geographically different. The T.t. tracheliotos is most commonly referred to as the lappet-faced vulture. It mainly lives in Ethiopia, Kenya, Tanzania, Namibia, Northern parts of South Africa and Swaziland.

The subspecies appear in smaller numbers and are different in appearance and size. The T.t. nubicus subspecies lives in Egypt, Sudan, and along the Arabian peninsula.

The subspecies, T.t. negevensis, brought to the verge of extinction in the 1980’s, lives in captivity in Israel and the Arabian peninsula. They get the subspecies name from the Negev desert which they called ‘home’. They differ in color with dark brown on their back.

In neighbouring Namibia and Botswana, the Nubian vultures are in the Etosha National Park and the Makgadikgadi Pans National Park. Both parks feature salt pans which act as key breeding areas for the species.

In Ethiopia, the lappet-faced vulture lives on the outskirts of the forests in the Bale Mountains National Park. The home range of the vulture depends on the habitat and is between 8 and 80 km².

It’s also not uncommon to spot these vultures in human settlements, as they feed on roadkill and are always on the search for food.

What Does a Lappet-Faced Vulture Eat? 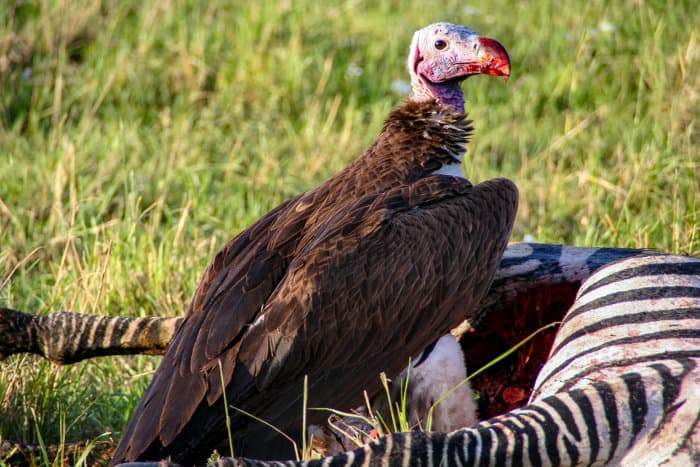 Lappet-Faced vultures typically scavenge off the remains of dead animals. They possess a strong beak suitable for breaking through the tough skin and tendons of even the largest mammals. When arriving at the site of a kill the lappet-faced vulture will often aggressively assert dominance before feeding on the carcass.

The vulture’s sense of smell, like most Old World vultures, is not impressive. They rely on sight and the presence of other scavengers to find food. Smaller species of vultures circling indicate a kill below.

There is however a hierarchy. While the lappet-faced vulture is the largest of the flying scavengers, the hyena with its strong jaws gets priority. After the four-legged scavengers have had their fill, the vultures will feast on the carrion, sometimes eating so much that they are unable to fly.

These large vultures mainly scavenge for food. However, following periods of no kills they will eventually hunt. Lappet-faced vultures hunt insects, small animals, and flamingo chicks.

Torgos tracheliotos are a solitary species, often living alone or with a mating partner. They are not very vocal, although do emit some squawking and chittering when competing for food or a perch.

Sighting several lappet-faced vultures at a single kill is possible. However, they are solitary birds with aggressive behaviour. Mating pairs prefer not to nest in groups or with other vultures.

They construct a nest from branches and sticks, commonly perched in the fork of a thorny Acacia tree. In urban areas, they nest on electricity pylons or other man-made structures and feed on roadkill.

A pair of lappet-faced vultures, once bonded, are monogamous and only breed once per year. The female begins breeding from 6 years old and will typically lay just one egg at a time.

The breeding pair take turns incubating the egg for 55 days. From 120-128 days, the young chick attempts its first flight. Finding independence, the bird will leave the nest around 170 days old. The newborns’ natural predators are the secretary bird and leopard. 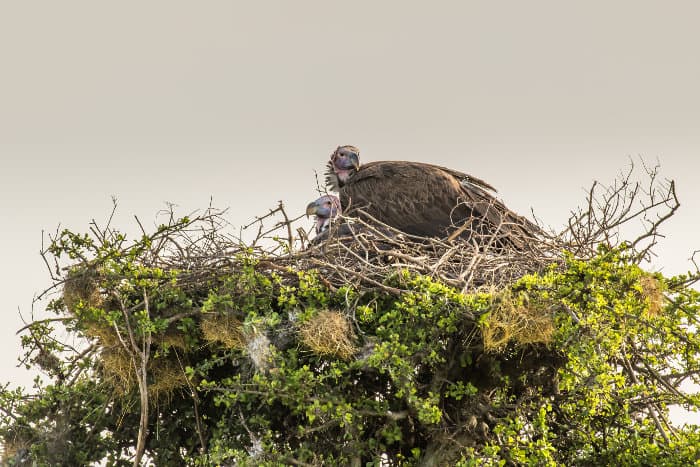 The average lifespan of a lappet-faced vulture is 40 years, with an average generation length of 15 years. The vulture egg gets incubated in the nest until the young chick hatches.

The young vulture explores its independence from its parents although it can be dependent on them until one year of age. Lappet-faced vultures only reach sexual maturity from the age of 5 to 6 years old, which contributes to the challenges faced by this endangered species.

Unfortunately, the lappet-faced vulture is an endangered species. Habitat loss is a problem due to urbanisation and farming, bringing these wild birds into contact with humans. The biggest threat to the current population is poisoning.

Accidental poisoning occurs, largely due to strychnine, used by farmers to manage pests. The vultures face a stigma held by livestock owners who believe they are a threat to young animals.

However, deliberate poisoning is often driven by misinformation; “do vultures carry diseases?”. As it turns out, no. The lappet-faced vulture does not carry diseases and is not a threat to livestock. Education can help the endangered species by improving the stigma towards these vultures.

15 lappet-faced vultures were poisoned in Zimbabwe in 2012. Many of the birds were missing specific body parts related to traditional medicines. Each animal lost increases the risk of extinction due to the slow reproduction rate of the species. 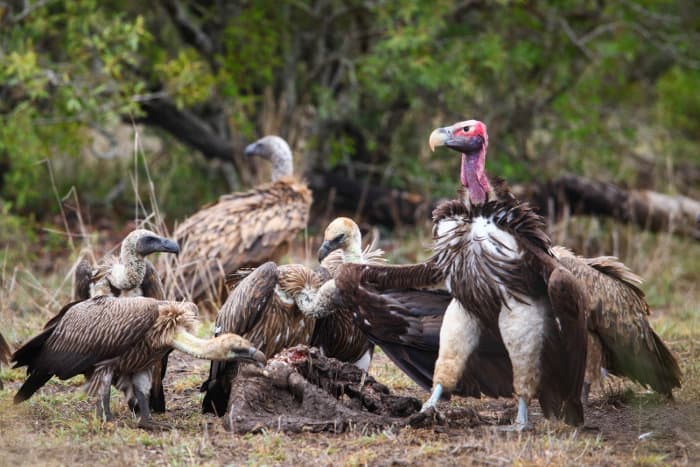 Here are some interesting facts about the largest African vulture.

See the Lappet-Faced Vulture From a New Perspective

Despite being one of the ugliest animals, lappet-faced vultures play an important part in keeping a balanced ecosystem. These large raptors are worth seeing in person.

The best sighting is during flight when the full wingspan of the largest vulture in Africa is visible. Head out on a safari to Namibia or South Africa and keep an eye on the top of the trees for lappet-faced vultures perched up high.

Seeing a lappet-faced vulture lifting off into the air is a memorable experience. So book a safari and get your chance to see these incredible raptors in real life. 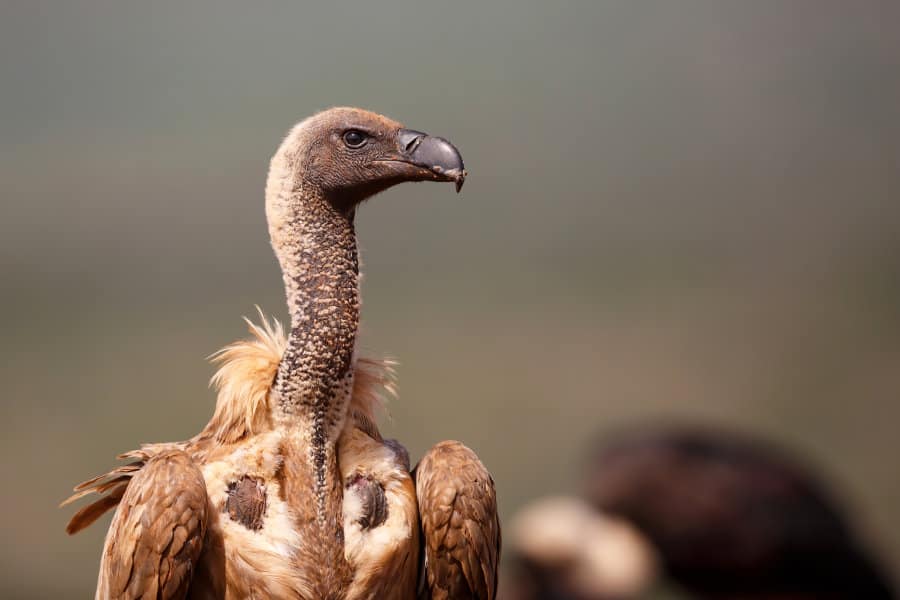 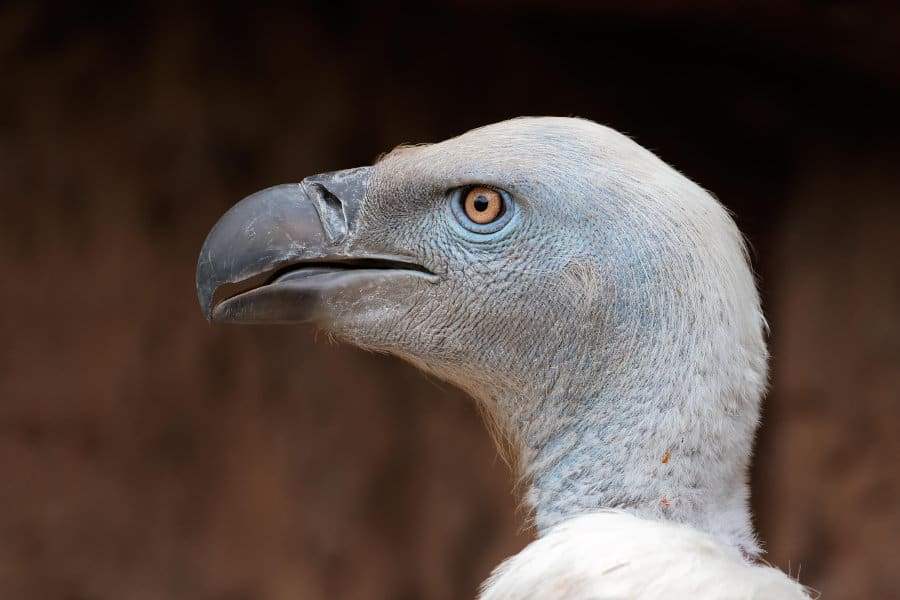 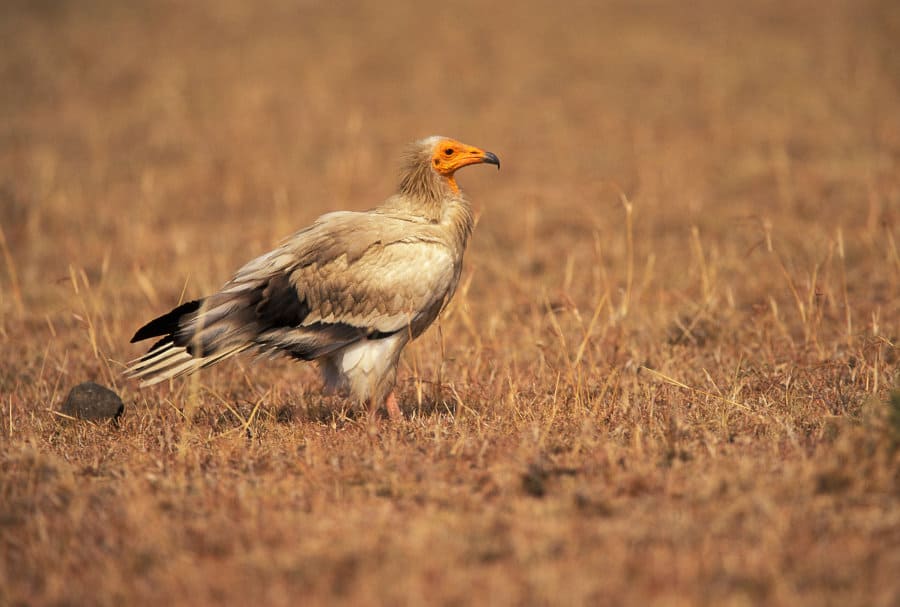