A group of giraffes is called a tower.

Or is it a herd? Perhaps it’s a journey of giraffes, or even a kaleidoscope? If you ask the question: “what is a group of giraffes called?”, you might get a different answer every time.

That’s not a tall tale, despite the subject matter. There are several collective nouns for a group of giraffes.

These terms tie in with both the giraffe’s physical appearance and its social behaviour. They also tell us a lot about these intriguing animals.

A Tower of Giraffes 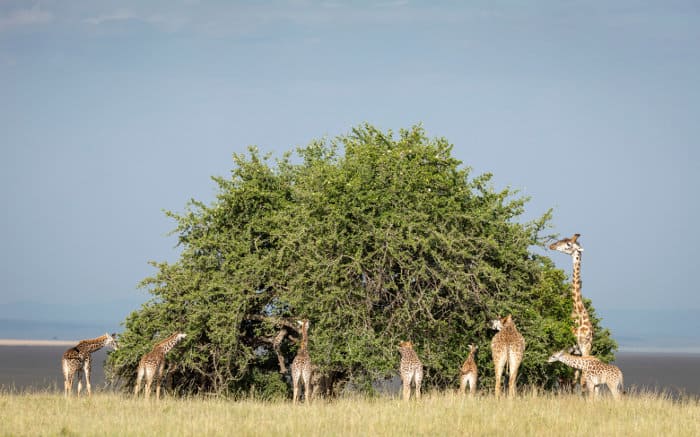 No prizes for guessing why a “tower of giraffes” is often used as a collective noun. It’s a fitting name for the world’s tallest animal.

These lanky animals do tower above their fellow creatures, and a group of giraffes looming into view is an impressive sight. They stand between four and six metres in height, and their necks alone can reach almost three metres!

That height comes in handy when browsing. The giraffe’s long neck allows it to access the tops of trees, which are out of reach for shorter mammals. (In other words, all mammals!)

As such, the giraffe doesn’t have to compete with other species for food. A tower of giraffes will wander the savanna, scanning the treetops and browsing leisurely. They have their pick of vegetation – acacia leaves being a particular favourite.

Giraffes’ height also comes in handy for spotting potential predators. Not many animals would attempt to take down an adult giraffe, but lions sometimes try their luck.

A tower of giraffes will often form a loosely connected group. They prefer open woodland or grassland where they can spot predators more easily.

Giraffes are ruminants, like a lot of domestic livestock. They chew and swallow food, then pass the half-digested cud back up into the mouth and continue chewing.

This requires very strong muscles in a giraffe’s oesophagus. It’s a long way from their stomach to their neck!

They also need powerful heart muscles, to pump blood around their large body and up that long neck.

The left ventricle pumps blood to the giraffe’s head, so it has extremely thick walls. It also means giraffes have very high blood pressure.

A Herd of Giraffes? 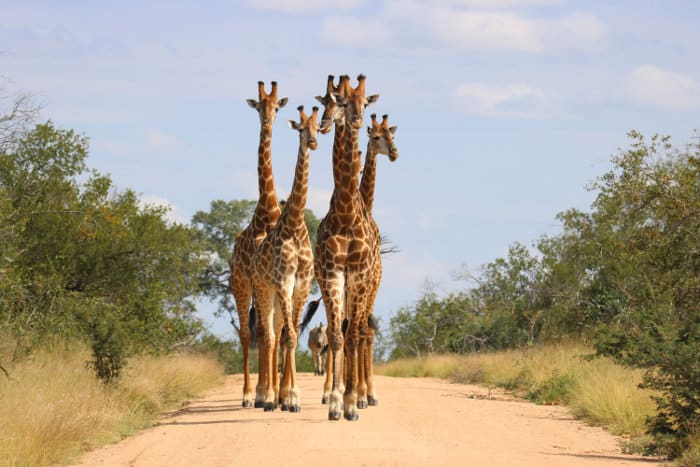 A well-known collective noun for many species is “herd.” This can also be used to describe a group of giraffes.

The term “herd” often describes a social group of hooved mammals. Giraffes, like sheep, cattle, and many wild species, are even-toed ungulates. So, it makes perfect sense to say: “a herd of giraffes.”

It’s more of a generic term, but one of the most common collective nouns for giraffes.

Some African animals are enigmatic loners. Others are highly social, never straying far from the safety of their family.

Giraffes’ social behaviour is harder to define. Some can be social animals, living in groups. Others are more nomadic. The size and composition of their groups vary a lot, too.

The term “herd” suggests a single group, but individual giraffes will come and go. This is called a fission-fusion society.

Within these larger, loosely grouped herds, there are smaller groups. Females will generally bond more closely than males, often forming same-sex herds. When there are calves to look after, these nursery herds help to rear the young giraffes.

Young males will sometimes form bachelor herds. As they age, they become more solitary, but might still pair with other adult males.

Some males will assert their dominance. Once mating rights have been established, individuals usually interact quite peacefully.

A Journey of Giraffes? 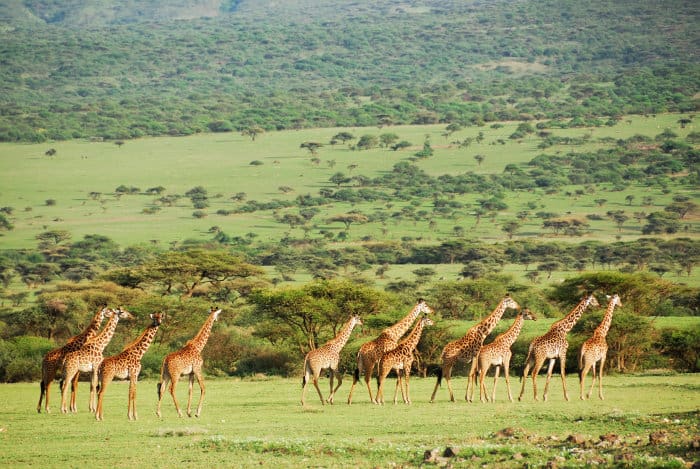 A “journey of giraffes” is another term that’s occasionally used. Like the other collective nouns for giraffes, it describes them accurately. At least, when they’re on the move.

Giraffes have large home ranges, which they’ll traverse in search of food. Home ranges can be as large as 50 square miles. Giraffes aren’t territorial, so there’s plenty of overlap between different groups.

If food is scarce, larger herds might split up, as the journeys of giraffes move off in smaller groups to find greener pastures.

So, if there’s a herd strolling across the savanna, you might want to call the group a journey of giraffes instead.

There’s no rule for it! You might even prefer this next collective noun for giraffes.

A Kaleidoscope of Giraffes? 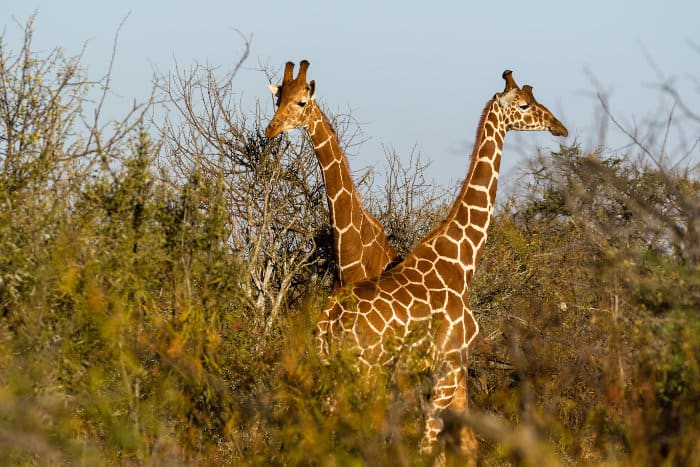 This is a more obscure term, but an amusing one that celebrates the giraffe’s amazing coat patterns. Perhaps it also references the optical illusion created when two giraffes intertwine their necks. This creates a symmetrical ‘reflection.’

As of today, only one species of giraffe is recognised, but the most recent study has suggested there could be between two and six species. Most giraffes live in either East or Southern Africa, though habitats are fragmented.

However you classify the different species/subspecies, it’s clear that not all coats look the same. There are subtle differences in both colour and patterns that mark out different populations.

With human encroachment, kaleidoscopes of giraffes are a rarer sight. Many populations are falling, and conservation efforts are needed to help them survive.

What is a Group of Giraffes Called? Whatever You Like! 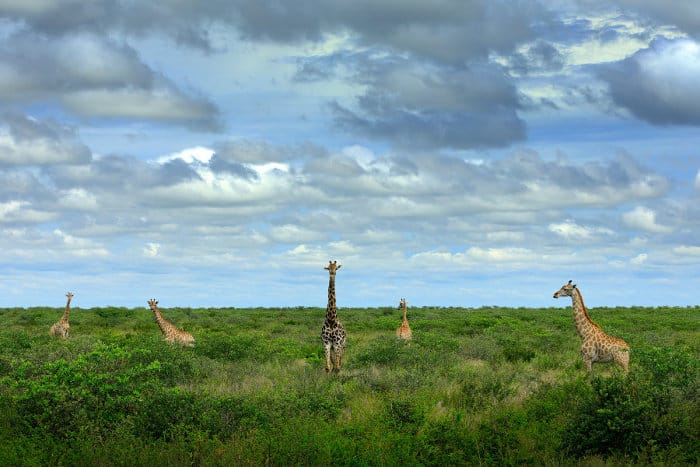 What do you call a group of giraffes? Does it matter?

As you can see, there are several collective nouns for a group of giraffes. Many are simply descriptive; there’s no right or wrong answer.

If you’re going for scientific accuracy, you can’t go wrong with: “herd of giraffes.” Many people use the term to describe groups of hooved mammals.

Prefer something more evocative? Why not opt for a “tower” or even a “kaleidoscope” of giraffes? For travelling giraffes, a “journey” is a great term to use.

These majestic, gentle animals are an iconic part of Africa. Whatever you call them, they’re a special sight.

Maintaining their habitats and celebrating them on safari is one way to ensure that giraffes continue to grace the continent. 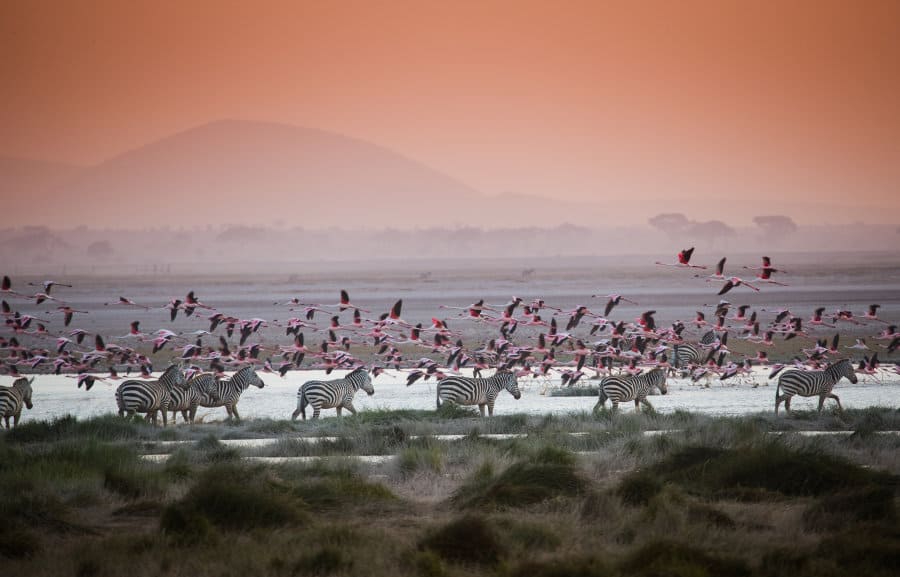