One of the truly incredible moments while on safari in Africa is when you observe a pride of lions stalk up to a buffalo, explode from the grass, pounce on the startled bovid and wrestle it to the ground.

While it’s a team effort, there’s usually a lion with its jaws locked around the buffalo’s neck, crushing the windpipe.

But have you ever wondered to yourself how much strength it takes to asphyxiate a buffalo? Or maybe you asked, what is the bite force of a lion?

Although considerable debate exists, a lion’s bite force averages between 650 and 1000 lb.-f.

Several factors contribute to the bite force strength, including the age of the lion, its sex, which teeth you’re measuring, and the method you’re using to calculate the force.

While their bite force might not seem impressive, lions can pull off some incredible displays of power with their teeth.

Below you’ll explore some factors contributing to a lion’s bite force, why they need this force, and how a lion’s bite compares to some of the other “big biters” of the African bush.

All You Need to Know About a Lion’s Bite Force 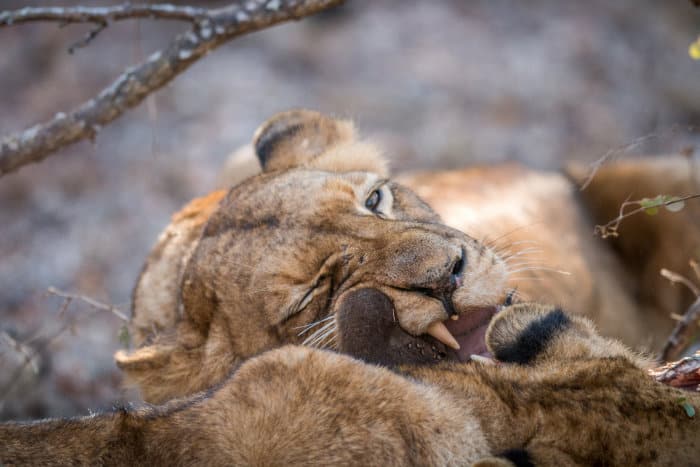 Lions (Panthera leo) are the largest of Africa’s “big cats”. As one of the most iconic denizens of the African plains, lions have an aura around them of regality and fame (or infamy).

However, they are not the “top dogs” regarding biting power.

While a lion’s commonly accepted bite force is 650 pounds of force (lb.-f), various sources indicate that lions apply a bite force of up to 1000 lb.-f (roughly 4450 newtons) or more under the correct conditions.

Tigers (Panthera tigris) are close relatives of lions and have a bite force of around 1050 lb.-f.

Measuring an animal’s bite force is challenging and potentially hazardous (particularly those in the wild). Scientists may not always get accurate results in the first attempt, so they need to take multiple samples from as many individuals as possible for accuracy.

Unfortunately, this multiple sampling is not always feasible. Lions in the wild are usually relatively “skittish,” and may not bite the instrument correctly or repeat the experiment multiple times before moving away.

Captive lions are also not the best for these experiments as the forces contributing to jaw muscle development in wild lions are often absent from captive lions, making their bite less potent.

A bite force is important for all animals (with jaws). An animal’s bite force is the amount of force they apply through their jaws and teeth. An animal needs a strong bite force to cut, rip, hold onto, kill, or chew its food.

Several factors contribute to how much force a lion applies when biting, including:

The age and size of the lion 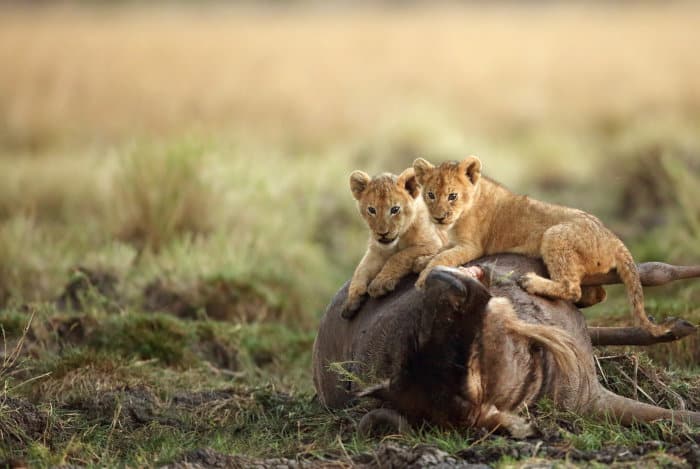 It stands to reason that a full-grown lion has a stronger bite force than an adolescent. However, as the lion ages past its prime, it also begins to lose some of that force.

Bigger lions (due to their superior genetics) would also have slightly higher bite forces than smaller lions as their muscles are larger.

Consequently, most of the debate surrounding the commonly accepted 650 lb.-f bite force of lions comes from measuring a sub-adult lion.

Sexual dimorphism in certain animals is a well-defined scientific fact.

Females are slightly shorter, reaching roughly 9 feet (2.7 meters) and weighing 265 to 395 pounds (120 to 179 kilograms). Males are usually more muscular and stronger than females.

This size difference, along with other physical features, means that males have a stronger bite force than females.

The lion’s muscle development and past injuries 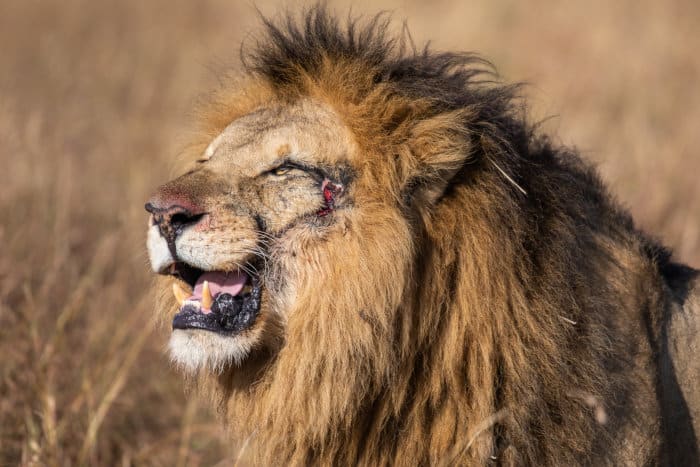 Aside from genetics, what the lion ate and what injuries they might have sustained during their lifetime (particularly to the face from fighting or by prey defending itself) play a role in determining a lion’s bite force.

If there is pain in a tooth or the mouth (from an abscess, wound, or rotten tooth), a lion will be less likely to bite at its full potential, which, over time, might reduce the lion’s effective bite force (muscle atrophy and loss of strength).

The two muscles responsible for most of the bite force are the temporalis and masseter.

The pterygoid muscles play a lesser function but also contribute.

A lion’s teeth and jaw bones affect the bite force

Lion’s teeth are perfectly designed for cutting into meat and crushing smaller bones.

The teeth in a lion’s mouth have different surface areas, resulting in different amounts of pressure exerted when a lion bites.

What the lion bites 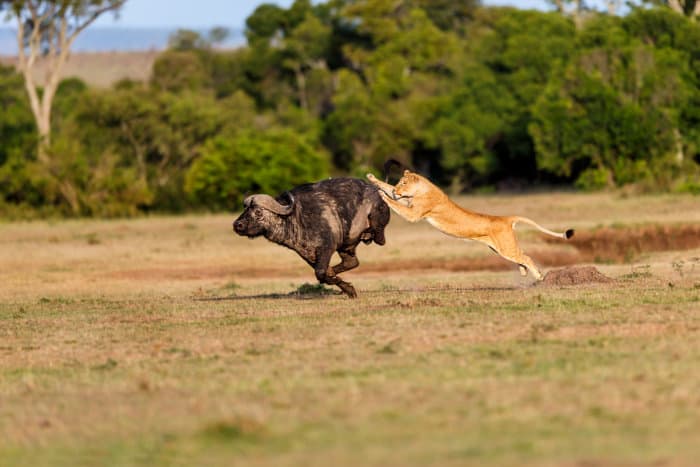 Depending on what the lion bites down on will determine the amount of bite force it exerts.

I.e., a lion probably won’t bite with all of its force on a softer item, but when cracking through bones to get to the marrow, a lion would exert more force.

During a study conducted in 2004, researchers discovered that wild lions developed stronger jaw bones and muscles compared to captive lions, which led to a stronger bite force.

The increase in bite force was directly related to the food the wild lions ate.

Their diets consisted of more bones and cartilage, which is harder than what captive lions ate. This “harder” food meant the lions’ bodies needed to adapt to the diet, strengthening bone and tissue.

How is a lion’s bite force measured?

Bite force, as a rule, should be measured in pounds of force. However, many sources record it as “psi” (pounds per square inch).

To accurately measure psi, you’ll need to know the size of the surface exerting the pressure, which is near impossible when that surface is in a mouth full of teeth.

To determine bite force in lions, researchers use indirect (they don’t physically test with a living animal) measurements of skulls, jaws, and where the muscles attach while considering the size, age and health of the animal in question.

However, some researchers use a direct method, which utilizes specialized tools that the test lion bites down onto. A force transducer is one of these tools.

Other researchers employ crane scales the lion pulls against to measure the bite force.

Unfortunately, most methods have downsides. When pulling against a device or biting down, the lion might not be giving its “all”. However, there is room for error when calculating the bite force from measurements (under or over-estimating).

The most accurate way is to use both methods over a large sample group to find a baseline.

Why Do Lions Need A Bite Force? 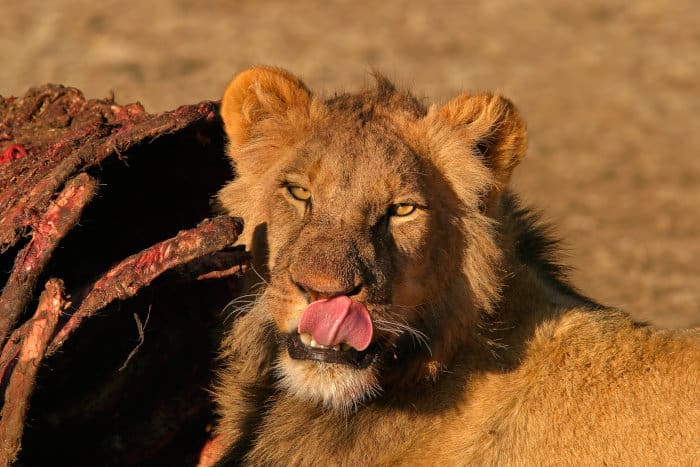 An animal’s bite force is essential to its survival. Without a sufficient bite force, the animal is limited in what it can eat, ultimately leading to its death.

A lion’s bite force is critical for:

How lions use their teeth to catch, kill, and eat prey

Lions eat medium to large prey species (100 to 1000 pounds or 45 to 453 kilograms). They do this by stalking, catching, and suffocating the animal.

When a lion pride chases down an animal, they pounce and grab onto it with claws and fangs (canines).

Once they wrestle it to the ground (or during the process), one lion usually bites down on the creature’s windpipe, which causes it to suffocate.

Lions need a strong bite force to collapse the windpipe and hold onto the beast, fighting for its life.

Although lions have a relatively strong bite force, the prey that they catch often weighs almost double what they do. Unfortunately, no matter how strong your bite force is, you won’t take down a larger animal alone.

To combat this weight disadvantage, lions hunt in prides. As they work together, they lower the “need” for a stronger bite force because each lion plays a role in bringing down the animal.

Some examples of prey include:

Once the grizzly task is complete, lions use their blade-like carnassials to slice off chunks of meat. 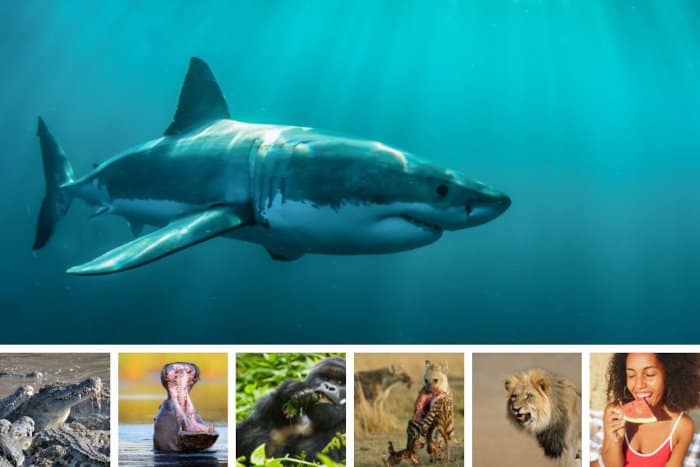 How well does the “king” compare to some of the other “big biters” of the African continent?

The table below examines some of Africa’s top bite force animals.

Lions are relatively low down on the list of bite forces. Due to selective pressures, including diet and defense, these animals needed to develop stronger bite forces.

I.e., sharks and crocodiles need to catch fast-moving prey. They also do not chew their food and have to bite chunks they can swallow.

Hippos use their mouths to defend themselves and fight over territories and mates, while gorillas eat hard seeds and bark.

Hyenas and lions are comparable. They eat “softer” meat, chew their food, and hunt in groups to bring down larger prey.

While learning about lions and other African animals from the comfort of your home is great, being able to get up close and personal with them is an opportunity no one should miss out on.

Book a safari now to see these incredible cats in their natural environment. You might even get to witness a pride take down a Cape buffalo.