One so often sees oxpeckers and grazing animals together that they merely become unnoticed. However, there’s far more to this bird than the large company it keeps.

Sub-Saharan Africa’s oxpeckers have an interesting taste for all things gross and a unique form of kinsmanship. While they may not be at the top of your list of birds to spot on safari, these bright-beaked vertebrates are quite unique.

Intrigued? Keep reading to learn all there is to know about the fascinating red-billed oxpecker.

What is an Oxpecker? 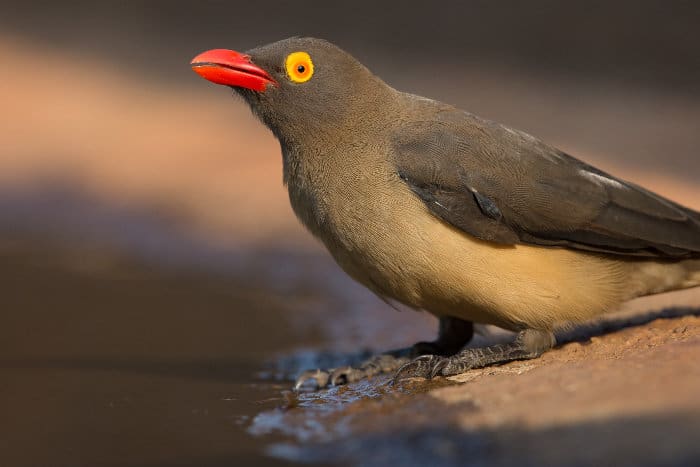 The red-billed oxpecker is a bird found in Africa. It weighs around 0.05 kilograms (0.7 ounces) and reaches 0.2 meters (7.87 inches) in height at maturity. Their bright red beaks and yellow-ringed eyes contrast their olive-brown plumage.

Oxpeckers have short legs ending in sharp claws, which helps these little birds cling to the hinds of their moving hosts. Their colorful beaks are flat yet sharp. This allows them to pluck ticks and other parasites off the bodies of animals such as impala, kudu, zebra, giraffe, buffalo, and rhino.

The scientific name for the red-billed oxpecker is Buphagus erythrorhynchus, one of two bird species in the Buphagidae family. Oxpeckers were previously placed within the starling family, known as Sturnidae.

The yellow-billed oxpecker, also known as B. Africanus, is the second member of the Buphagidae family. The most significant differences between these two birds are their beaks and bodies.

The yellow-billed oxpecker’s beak has a yellow base, and they lack the bright yellow ring around their eyes. The plumage above their tails is also paler in comparison to its red-billed relative.

The yellow-billed also has a stouter beak and uses a pecking motion to extract ticks from hosts, whereas the red-billed oxpecker uses a scissor-like action.

Where Do Oxpeckers Live? 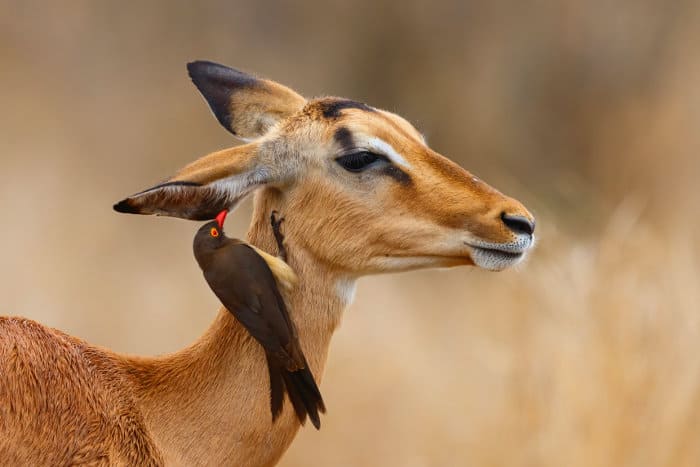 The red-billed oxpecker is native to Africa, and it’s quite common to spot these birds on the backs of various wildlife across sub-Saharan Africa.

The oxpecker lives in the region along the east of Africa. This extends from Ethiopia and Somalia’s grasslands down to the Kruger National Park’s northern bushveld in South Africa.

What Do Oxpeckers Eat?

These small creatures are also known as tick birds, since ticks make up the bulk of this bird’s diet. They also consume mites, fleas, maggots, flies, and all types of larvae. Red-billed oxpeckers find all of this on the bodies of their hosts.

While these creepy crawlies may seem gross, red-billed oxpeckers’ strange dietary preferences don’t stop there. These birds also enjoy dining on the blood and rotting wound tissue of their hosts.

There is conflicting evidence as to whether the relationship between this bird and its host is mutually beneficial or not. Some argue that, by eating the wound tissue, oxpeckers keep the host’s wounds clean. Other scientists debate that this has a negative impact in that it prevents the sores from healing quickly. 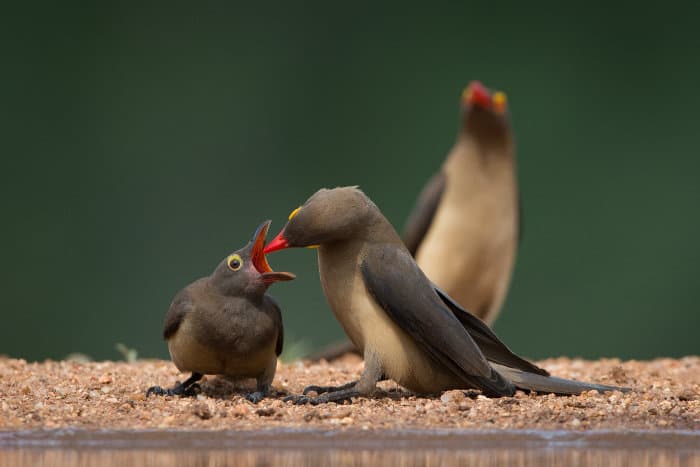 These birds mate for life, except in cases where a mate dies. Interestingly, red-billed oxpeckers are co-operative breeders. This means that there will only be one breeding pair that incubates the eggs in a group of these birds.

The rest of the group members become ‘helpers’ and are often mature chicks from the dominant pair’s previous broods. The helper’s responsibility is to help feed the new chicks and remove their shells and fecal sacs. This is to keep predators from noticing the chicks in their nests.

Throughout the rainy season (September to February), courting and copulation occurs on the backs of host animals. Tick birds build their nests out of grass and hairs from wildlife hosts in the cavities of trees, rocks, and other similar places.

Oxpeckers usually lay three eggs at a time, and incubation takes 12-13 days. During this time, both the male and female take turns to keep the eggs warm.

After hatching, the chicks stay in the nest for up to four months before setting off on their own. It is possible for a pair to hatch more than one brood in a season.

Here are some cool and interesting facts about this little African bird:

Learned Something New About the Red-Billed Oxpecker? 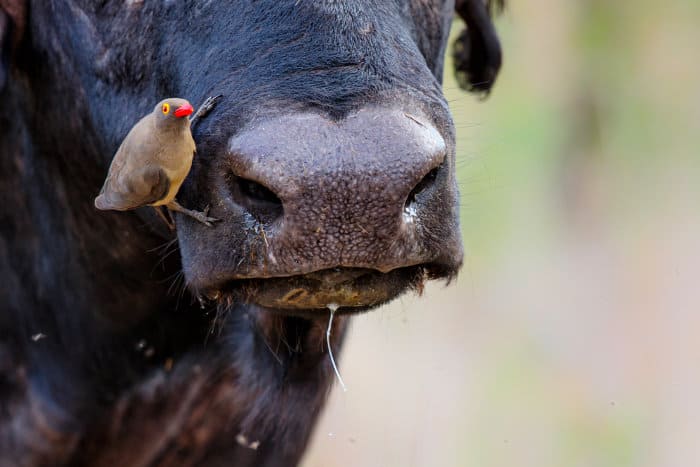 Watching these little birds duck under an impala’s hind legs or disappear into the chasm of a buffalo’s nostril certainly makes for a bizarre sight. While their grooming of their hosts may appear comical, the red-billed oxpecker is a fascinating bird.

Its bright beak and yellow-rimmed eyes give it a unique, striking look. At the same time, their questionable dietary choices and peculiar parenting style make the oxpecker bird even more intriguing.

The next time you’re on an African safari and see one of these birds riding on the back of an impala or buffalo, remember just how unique these creatures are. 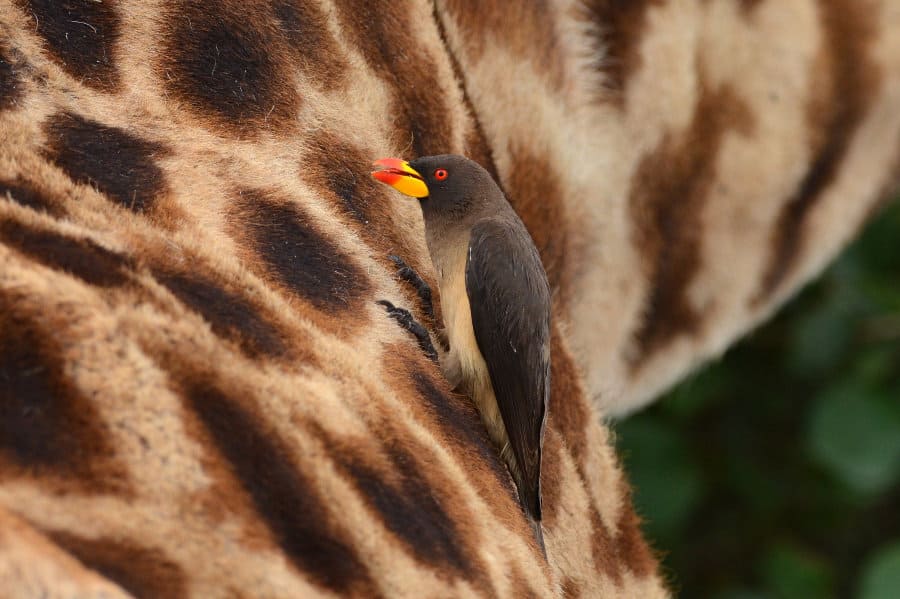