Interesting facts about the giraffe

For explicit reasons, giraffes are the tallest animals in the world.  It almost seems as if they come from another planet.

Apart from its unmistakably long and unusual neck, what else do you know about them? For example, its eternal neck may be 1m80 long but it only has seven vertebrae – that’s the same as us!

Any ideas for other interesting facts about the giraffe?

Why don’t we find out together.

Thankfully the giraffe’s tongue is not as imposing as its neck, yet it is still worth mentioning (around 45 cm). Why that long? Well, you see, the animal’s favorite food comes from the acacia tree.

For most animals acacia leaves are out of reach due to the huge thorns (several cm long; trust me you wouldn’t want those anywhere near you). 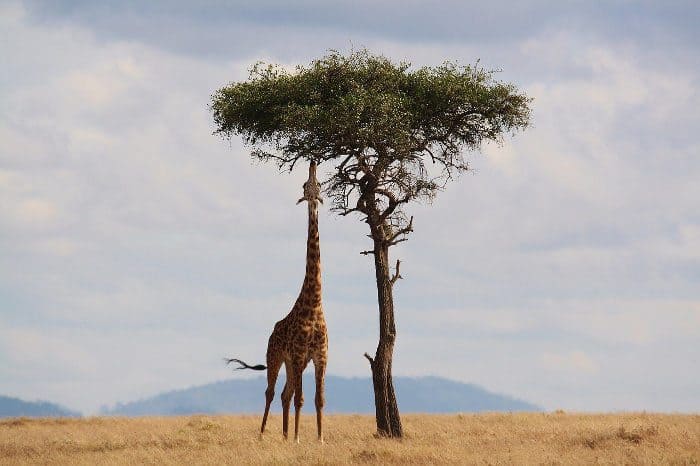 For the giraffe however, this is no issue whatsoever. Thanks to its prehensile lip and tongue it can maneuver a way around thorns to reach its treat. Et voilà. Pretty easy! 😉

The tongue’s colour is also intriguing. It has a distinctive purple bluish tinge, which acts as natural sunscreen.

For a really close up encounter with a giraffe tongue you can try kissing a giraffe at the Giraffe Center in Nairobi. Here’s one of our Africa Freak contributors giving it a try. This is what he said afterwards: “it was slimy and my girlfriend refused to touch me until I cleaned my teeth!” 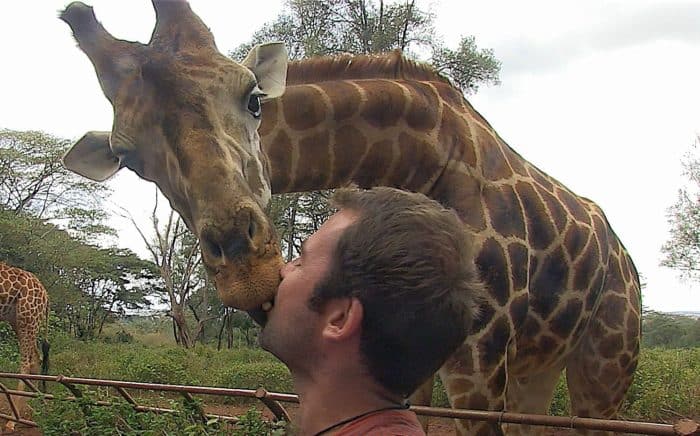 Incredible facts about a giraffe neck

Do you know how many bones form a giraffe’s neck?

Let me give you a hint. How many vertebrae do we have in our necks?

The answer is seven, exactly the same as the giraffe! Amazing, isn’t it? Naturally, giraffe vertebrae are just a little larger (up to 25 cm long) and heavier than ours. 🙂 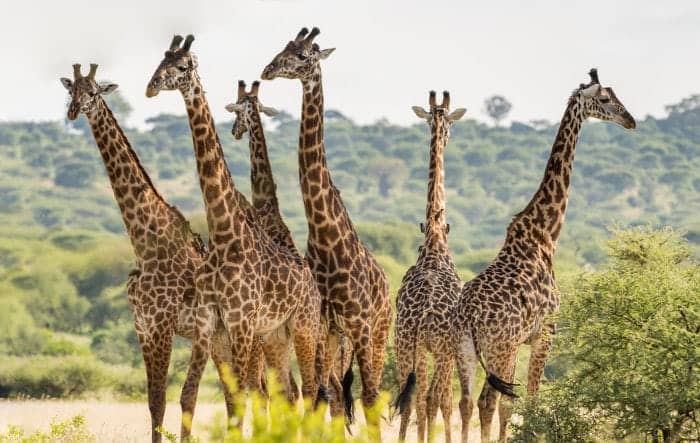 A giraffe’s neck is the same length as its legs, typically around 1m80. Some giraffe are even taller, with necks that are longer than almost every human that’s ever existed.

But why the long neck? Well, a long neck is extremely advantageous to reach the highest leaves from trees. Giraffe have evolved so they can eat the food that other land mammals can’t reach.

Male giraffe also use their necks to fight. They swing them into rivals, using their stubby horns to attack the underbelly. It’s a very unique boxing match!

Giraffes have a superb patterned skin that looks slightly like burnt pop corn. They are a beauty to watch and their coat is like no other. Perhaps the only animal that could rival its originality would be the leopard.

Not all giraffe have the same patterns. In fact there are huge differences and patterns are the easiest way to tell the difference between giraffe sub species. 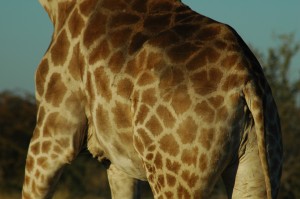 Do giraffe have two hearts?

No. Contrary to popular belief giraffe only have one heart. This weighs over 10 kg and has to be incredibly strong to pump blood to all its extremities.

What do giraffe eat?

Giraffe mostly feed from tall trees, using their necks to feast on acacias and other succulent trees on the savannah. Amazingly, giraffe get most of their water from leaves, allowing them to roam further and longer without needing to stop at a waterhole. An adult will consume around 30 kg of food per day.

What are a group of giraffe called?

A group of giraffe are known as a tower. How amazing is that! It’s one of the best collective animal nouns to know if you want to impress somebody with your wildlife knowledge.

How fast is a giraffe?

Giraffe can run at 60 km/h. That’s not too difficult when they have the longest stride of all the animals in Africa. Giraffe have a loping gait. Because they are so big it doesn’t even look like they are running – until you discover that they’re moving much faster than the safari vehicle and you can’t keep up!

Have you ever watched a giraffe running? They can achieve speeds of almost 60 kph yet it feels like they’re moving in slow motion. Very funny to watch.

What sound does a giraffe make?

Have you ever heard a giraffe? They don’t actually make sounds. Although a giraffe has a voice box it can’t push enough air down its long neck to get it working. However, it’s believed that giraffe make humming sounds that are beyond the reach of what the human ear can hear.

Here’s a newspaper article from Stephen, who went to the Serengeti in search of the sound that a giraffe makes.

Hello world – how is a baby giraffe born? 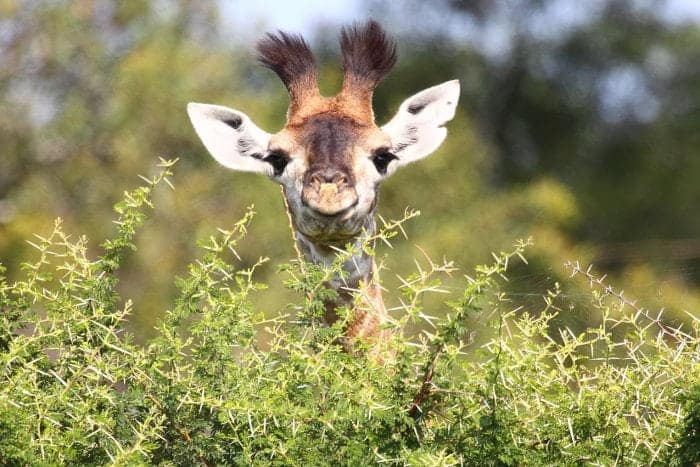 The gestation period of a giraffe is around 15 months, and they usually breed all year round. Only one calf is born at a time (twins are extremely rare).

Like most births it can be quite traumatizing for newly born babies. For baby giraffe it’s a very uncharacteristic and scary welcome.

Giraffe give birth standing up. So the calf makes an impressive 1.8 m plunge onto the ground. Just imagine – the very first thing to happen to you is to fall to the earth from nearly two metres!

But the fall does not hurt the calf. It’s actually an ingenious means of giving the animal life. When hitting the ground the giraffe gets a big shock. This kick starts the lungs so the giraffe can take its first deep breath. Without the dramatic arrival a giraffe wouldn’t be able to breathe.

After as little as an hour, the baby is up and running as if nothing had happened. Truly fascinating!

Male versus female – Key stats and facts about giraffe 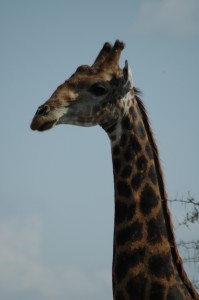 – Darker skin as the individual matures.

– Larger and longer horns on the head (up to 5”/13 cm). The horns get bold over time because of fights.

– Single medial horn on the forehead, and a bump over each eye socket (and behind each ear). 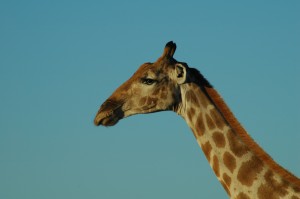 The female giraffe has lighter skin.

– The cow’s horns turn inwards and are well tufted.

There is only one giraffe species, giraffa camelopardalis, from the family Giraffidae.

But there are nine different giraffe subspecies. These are distinguished from each other by their geographical range and their unique skin patterns.

None of the subspecies have overlapping ranges. So in every safari destination you’ll only see one type of giraffe: you’ll need to travel all across Africa to see them all.

As their ranges don’t overlap, scientists aren’t sure if theses species can breed with each other. And if they did, whether they would have fertile offspring.

The most common subspecies is the Masai giraffe, that mainly inhabits Tanzania and the southern and central regions of Kenya.

Also in East Africa are the Rothschild’s giraffe, which you saw doing a giraffe kiss earlier in this article. These have recently been reclassified as being the same as the Nubian giraffe.

In Southern Africa you can encounter the Angolan giraffe. But not in Angola! Confusingly, this giraffe is what you’ll see on a safari in Namibia. The South African giraffe is spotted in South Africa and Botswana; this is the second most abundant subspecies.

Both the Kordofan giraffe and West African giraffe are critically endangered. They are a species of the northern giraffe and have virtually been wiped off the planet.

Do giraffe have predators?

Giraffes have very few predators due to their size and fearful kick. One kick from those big legs and it could kill. Plus, a carnivore needs to climb up to the top of the neck in order to perform the death choke it uses on other prey.

However, such an enormous animal can be a tempting target. Bringing one down would be the equivalent of an all you can eat buffet.

Lions are the giraffe’s main predator. They hunt in prides, with one or two targeting the neck and others biting the legs, preventing the giraffe from kicking out. Check out this incredible video of an unsuccessful hunt.

Giraffe are most vulnerable while drinking, as they have to lean forward to reach the water. Lions prey on giraffe during that time. And the giraffe must watch out for crocodiles as well!

On some occasions hyenas may try to take down a giraffe calf. Leopards and cheetahs aren’t able to feed on a giraffe – you need a team to take down the world’s largest land mammal! 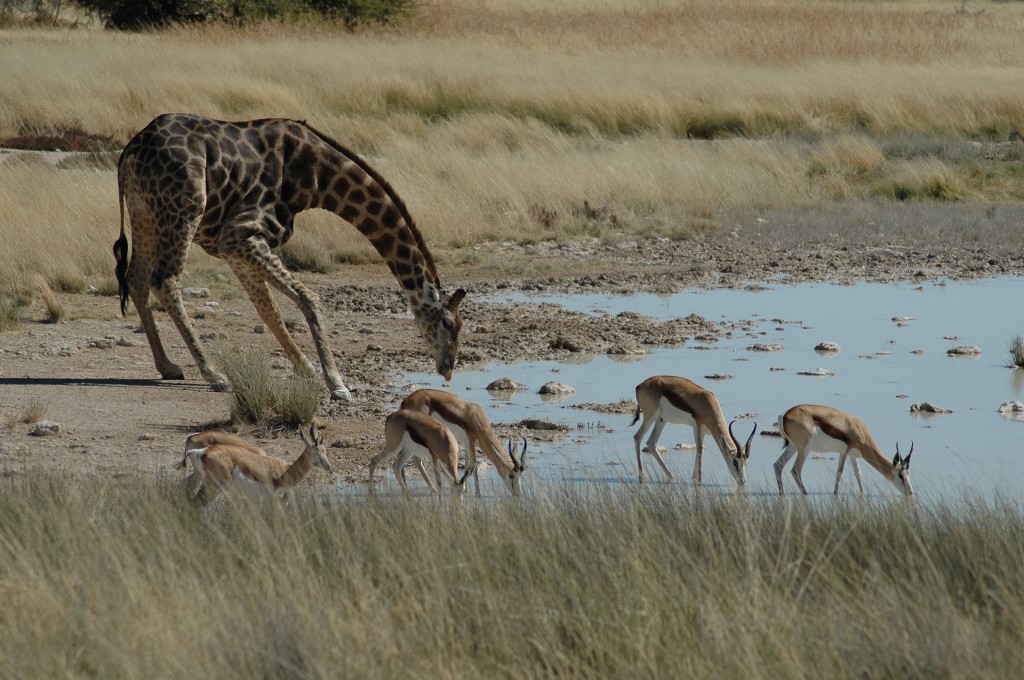 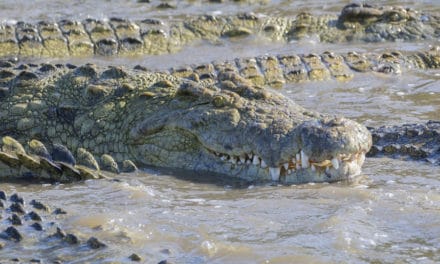 How long do crocodiles live?

Rising above the African plains on a balloon safari