A baby giraffe – along with the babies of other seemingly unrelated members of the animal kingdom, such as elephants, cows and even whales – is called a calf.

Even at birth the standout features are an incredibly long neck and ridiculously long legs. However baby giraffe calves share many significant characteristics with all the world’s other calves.

A baby giraffe is called a calf for good reasons. For example, giraffe calves are born with hooves. These are so similar in shape to cows it is hard to tell the difference.

The Baby Giraffe is Called a Calf

Here’s another cow similarity. Giraffe calves are equipped with an extending, velcro-like tongue. This lashes out to lick and lap up any greenery or shrubbery it deems to be edible.

It’s a large-scale version of the cow’s smaller but rough, sandpaper tongue.

If you can stand and observe a baby cow and baby giraffe side by side, chewing on some reeds and grass, you will immediately see a family resemblance.

According to some dictionaries, a calf is a “young bovine animal.” Which really isn’t true, because whales have calves, giraffe have calves, even elephants and yaks as well.

Many calves share a singular characteristic – their hooves. But elephant feet are completely different and whales don’t even walk.

And did you know that pieces falling off icebergs are also known as calves? So perhaps the name calf doesn’t live up to the uniqueness of these remarkable animals.

What are Male and Female Giraffes Called?

As with the babies of its species, female giraffe are named just the same as cows. They are known simply as… well… erm… cows.

A male giraffe, maybe predictably, is referred to as a bull.

You may wonder if bulls are called bulls because they have protruding horn-like mechanisms positioned on top of their heads.

But, though they are considerably smaller and less visible, females also have these pointed peaks, known as ossicones.

Both female and male giraffes have these ossicones from being small calves.

However, one aesthetic anomaly helps to separate the two – female ossicones are covered in hair, whereas those belonging to the male are virtually bald.

Evidence that it’s not only humans who see a disparity between the sexes and hair growth.

Do you think aging male giraffes invest in hair growth potions and miracle treatments to make them feel young and spritely again?

Often portrayed on Disney films as clumsy animals with lumbering limbs and heads in the clouds (pardon the pun), are giraffes really as foolish as we’re led to believe?

Sure, they are herbivores who have access to the highest, unreachable, and most untouched plants, allowing them to live a peaceful life free of competition for food.

But, don’t be fooled by the laboured way they seem to stroll along, without any visible cares or concerns.

Like cowboys in a dusty desert Western, the most dangerous gun-slinger is often the most laid-back.

The giraffe, from calf-age and up, is not to be provoked. Just ask any lioness who receives a mighty kick to the face.

Giraffe have one of the animal kingdom’s most powerful defense mechanisms – a single kick is enough to kill a lion.

So while they may seem like docile animals, giraffe know how to defend themselves. And they must learn to defend from a very young age.

Did you know that baby giraffe can stand up within moments of being born?

They can run the day they are born – not bad considering they come into the world with a massive bump to the head.

Yep, giraffe give birth standing up, so the calf literally falls to the African savanna with a thud!

The Giraffe – One of a Kind 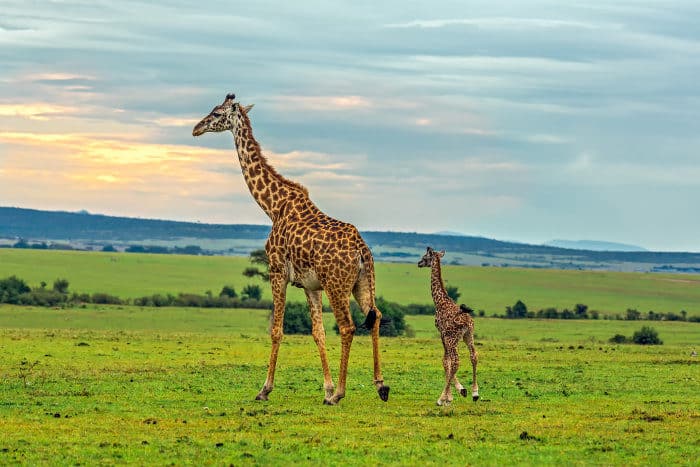 They may be called calves like many others but it cannot be denied that giraffe are one of a kind.

Despite the traits they share with others, no other giant is quite so chilled out. Giraffe calves are content to coast through life at a high cruising altitude.

Go and make the acquaintance of a giraffe calf and you will be dwarfed by their presence. Which is a magnificent highlight of an African safari.