The hippopotamus is the second-largest land mammal in the world, second only to the elephant. Unlike the elephant, hippos spend their time split between the land and water. They are semi-aquatic.

Common hippos live around the sub-Saharan regions of Africa, although pockets exist over most of the continent. In particular, the pygmy hippo likes the region of West Africa.

Hippos compete with elephants on another level – adorable babies. Both sets of young melt your heart effortlessly. They ooze cuteness and prove massively popular on safaris all over Africa.

For the most part, this article talks about common baby hippopotamuses, although it mentions other interesting pygmy hippo facts as well.

Here’s what you need to know about baby hippos, their moms, and what it’s like to grow up in the waterways of Africa. 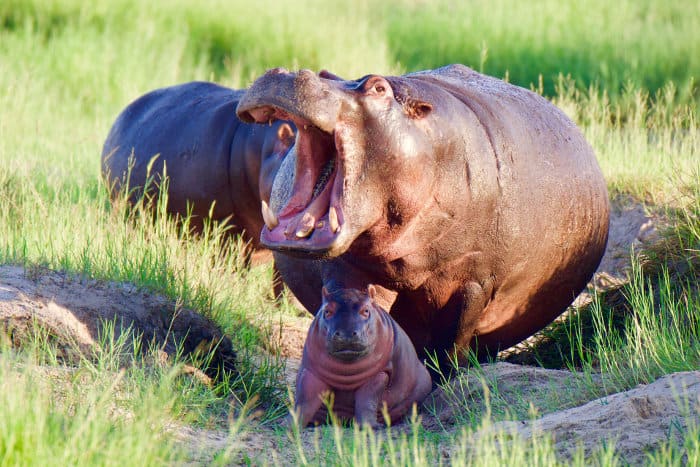 A hippo pregnancy lasts for about eight months – that’s even shorter than a normal human pregnancy. Female hippos mature and prepare to have babies at about five years old.

When a baby hippo is born, it suckles for around eight months before it switches to mainly solid food.

Pygmy hippos are pregnant for an even shorter period at seven months. They also mate and give birth on land or in water, whereas the common hippo prefers water. A pygmy hippopotamus baby stays in the water – even in the shallows – until it weans.

Pygmy hippos are a smaller subspecies of hippo, living mainly in West Africa. They are also nocturnal and prefer to be solitary animals. Standard river hippos tend to live in groups.

A baby pygmy hippo only grows to about 272 kg. That’s still pretty heavy, though nowhere near as heavy as their common cousins. They are very similar to common hippos in most other ways, even if they look a little more compact.

Hippos Don’t Have a Mating Season 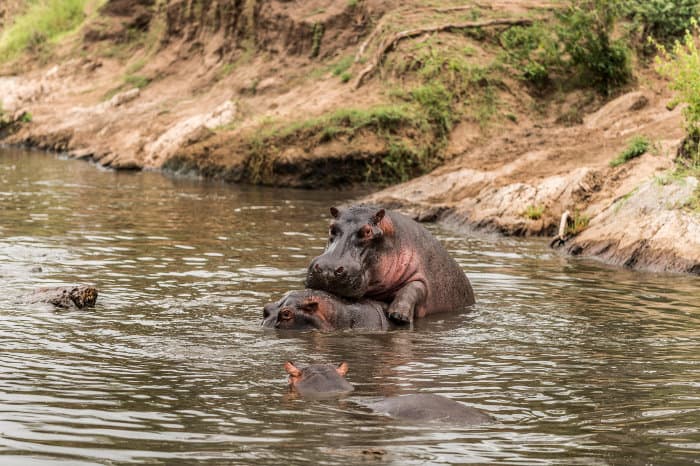 There isn’t a particular mating season. Statistics do show that there seems to be a peak birthing time between February and August. This means that mating happens mostly around May and June in the wild. In reality, hippos give birth all year-round.

Hippos are Born in Ones

A female hippo can give birth every two years. She gives birth to only one calf at a time. There have been rare occasions where twins were born.

In 2018, for example, a pair of young hippo twins arrived to a (probably) surprised mom in Zambia. Some believe that less than 15 instances of twins have occurred in the last 100 years.

That said, hippos have been around a long time. Some estimates put the hippo on planet earth as early as 16 million years ago – during the Miocene period. They certainly look like horses from another time. In fact, the word hippopotamus translates from Greek as “river horse”.

Side note: In South African Afrikaans, the word for hippopotamus is seekoei. It means sea cow. Can you see the link?

Babies Need to Bond with Mom 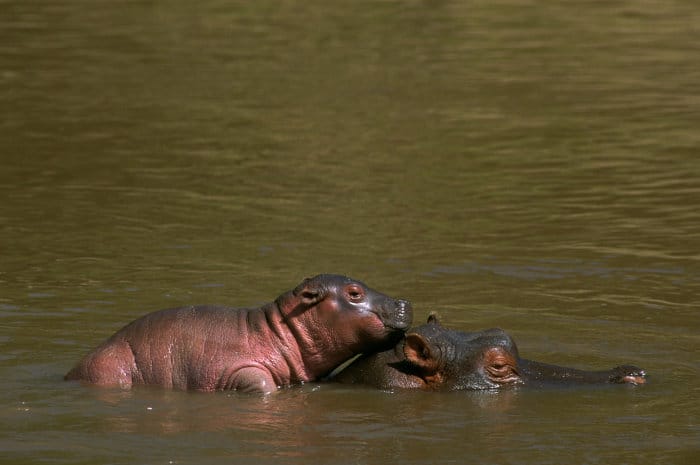 Although babies can be born in water or on land, a mom and her baby hippopotamus separate from the herd and spend several days in the water immediately after birth. They spend most of their time here for the first few weeks. Afterwards, they will emerge together and rejoin the herd.

A Baby Hippopotamus Doesn’t Weigh As Much As You Think

When it comes to hippos, size is everything. Fully grown male rive hippos weigh up to 3000 kg. Females weigh about half that – 1500 kg. They also stand around one and a half meters tall, and 3.35 meters long.

Common river baby hippos have a long way to go when they are born. They only weigh about 23-50 kg when they pop into the world. A pygmy hippo baby arrives much smaller – only 6.8 kilograms maximum at birth.

What Do Baby Hippos Eat? 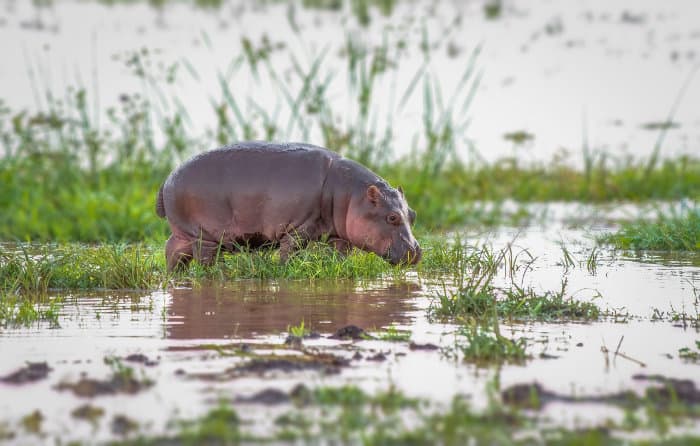 Hippos follow some basic rules that apply to all mammals. For example, babies need a hippo mother’s milk. As mentioned, they do this for around eight months. This is a relatively short time, compared to elephants, which suckle for up to three years.

Over this time, they also gradually start to eat grasses and other vegetation that more mature hippos eat.

You probably know that hippos spend lots of time in the water. Some estimates say they spend as much as 16 hours per day in the water! Baby hippos developed an amazing and unique ability because of this.

Baby hippos can actually suckle underwater. It’s a remarkable ability, given that hippos cannot breathe underwater or swim – more on that later.

When they grow up, hippos eat grasses and other vegetation, though mostly at night. They eat a lot, sometimes up to 36 kg of delicious food per day. Many safari camps near water experience the sounds of wading hippos foraging at night. The low rumbles and wails often lull visitors to sleep.

What is a Hippo Baby Called?

By the way, baby hippos, like cows and other cattle, are calves. It’s a good thing because their mothers are cows. And males are bulls. It is interesting to note that a herd or group of hippos is called a bloat.

Several other species in the African wilds share this name set, for example: 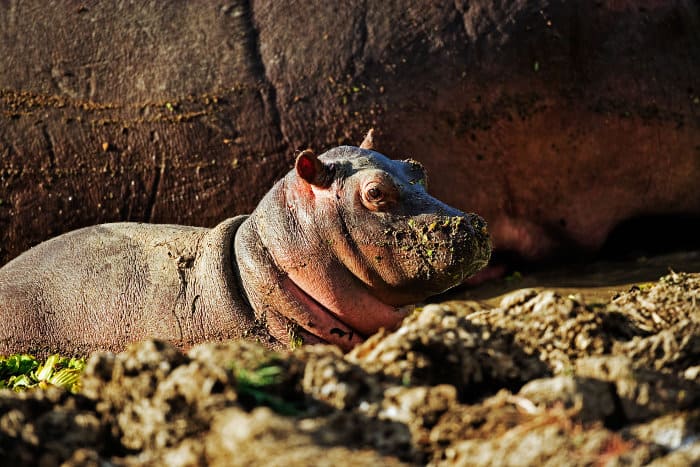 Does it seem odd to you that a hefty old hippo has sensitive skin to treat and take care of? Suddenly the hippo’s love of water makes a lot of sense. Hippos keep their skin wet or moist for most of the day, which is why you see them in the water a lot of the time.

Another fascinating evolutionary trait for the hippo is the production of a sort of sweat – known as “blood sweat” – that seems reddish in color. It’s actually a kind of sunscreen containing UV repellant and antibiotics. It’s even more bizarre, given that hippos don’t have sweat glands.

So, as mentioned earlier, hippos can’t breathe underwater, so they hold their breath. This may seem inconvenient for an animal that spends so much time in the water. Fortunately, the baby hippo is born with specific abilities, like its parents.

The comical view of a hippo peeping at you from the surface of the water is only possible because of their design. The eyes, ears, and nose all position in such a way that a hippo can almost totally submerge in water, leaving only those bits above the surface.

When you observe them from a riverbank or boat, all you sometimes see is a telltale eyeball and nostril breaking the surface. When they do submerge, hippos can close their nostrils, eyes, and ears.

Babies cannot stay underwater as long as adults. Adults remain underwater for up to five minutes at a time. Babies start dipping under for around a minute. When they get tired, they climb onto their mother’s back to rest. Never mind piggybacking. This is hippobacking.

They can actually fall asleep underwater and then come up for air and go back down without waking up. Don’t you wish you could do that?

You Will Not See a Baby Hippopotamus Swimming 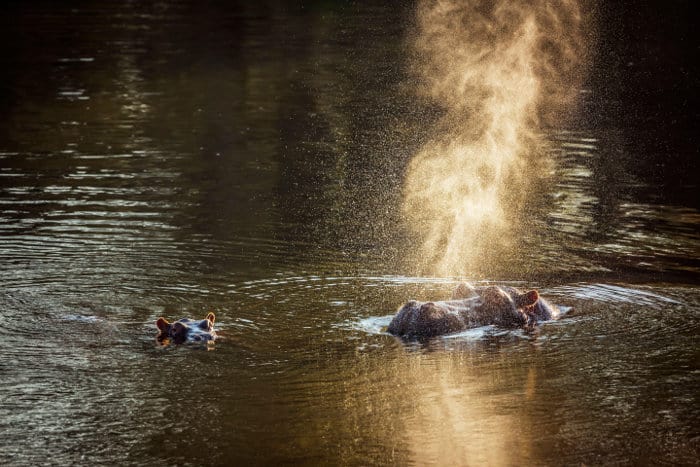 The reason is simple: hippo babies can’t swim. In fact, hippos don’t swim at all – not even adults. Hippos aren’t even buoyant! They’re just too heavy.

Babies learn to bob up and down in deep water. Like adults, they can hold their breath for about a minute to start with. Eventually, they learn to keep it for up to five minutes.

They will happily sit in shallow water or walk along the bottom of a lake or river. They learn to do this very well, and by the time they are adults, they move at speeds of up to 8 kph  this way.

So, you can’t outswim one and you can’t outrun one either. Over a short distance, a hippo is fast. It can reach speeds of up to 30 kph. Good luck with outrunning that.

Of all the things baby hippos need to fear, adult male hippos are the biggest surprise. Male hippos seem to attack little hippos, especially in water. Experts can’t agree on why. Some think it’s because herds may be too large to sustain. Therefore, males then take on a culling role. At least, that’s one theory.

Mom hippos are still protective of their young. Sadly, sometimes they can’t prevent this from happening.

Small hippos sometimes also fall victim to other opportunistic predators. Crocodiles are a threat in the water. They would never tangle with a fully grown hippo, though an isolated baby is fair game.

A very powerful big cat may also take a chance at grabbing a hippo. Lions or, in rare cases, a leopard may fancy their chances. The other significant threat is a pack of hyenas. Hyenas are very efficient hunters and don’t pass up opportunities easily for a meal.

All of these predators need a small hippo to wander from the safety of a herd. There’s very little chance of any of these taking on a healthy adult hippo and baby together.

See a Baby Hippo on Safari

No, baby hippos don’t go on safari. Instead, you can see them when you go. The population of hippos still seems to be decreasing, despite strong preservation efforts. The pygmy hippo, in particular, is somewhat endangered. That makes seeing a baby pygmy hippopotamus something special.

As with all of Africa’s wildlife, the best way to see a hippopotamus baby is on a fully curated safari in their natural habitat. Rangers can offer all sorts of information and beautiful stories about these stunning animals, and why would anyone not want that?

Hippos are almost everywhere in sub-Saharan Africa. If you’re looking for pygmies, try a trip into West Africa. Why not book a safari for a first-hand experience? Africa’s hippos (and their babies) are waiting for you. 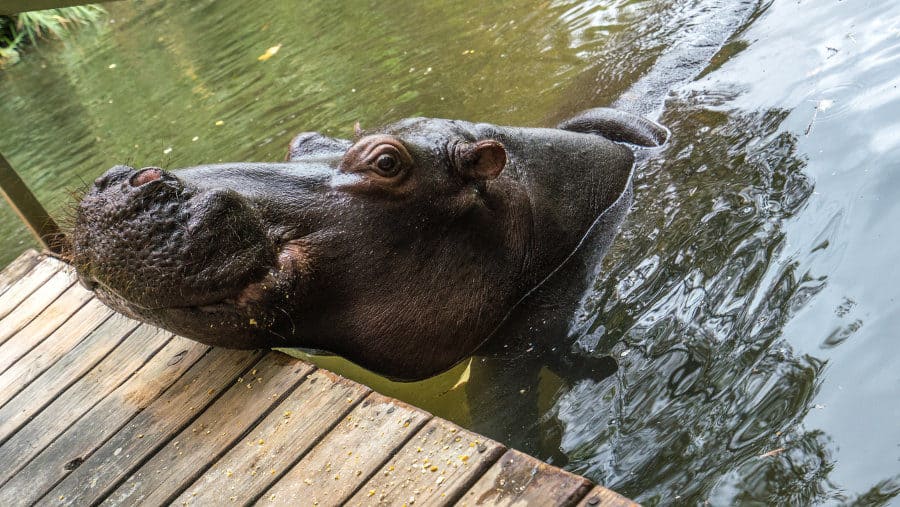