Baby cheetahs are one of the savanna’s most adorable sights. These spotted cats quickly evolve from helpless baby to speedy predator.

But how do they go from cute cub to deadly hunter?

Cheetahs are revered and known for their grace yet they are very different from the other wild large cat species. And the baby cheetah grows up very differently to a lion or other cat.

Here is the story of the baby cheetah, how they grow up, and why they are so unique compared to their wild feline counterparts.

What is a Baby Cheetah Called? 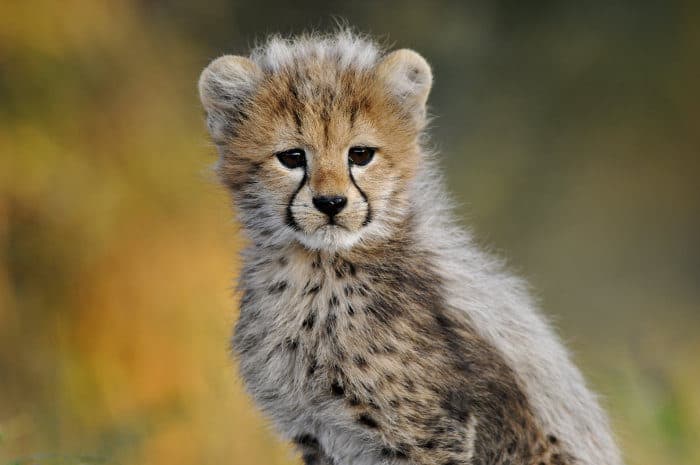 Starting with the basics, a baby cheetah is called a cub.

The Gestation Period of a Female Cheetah 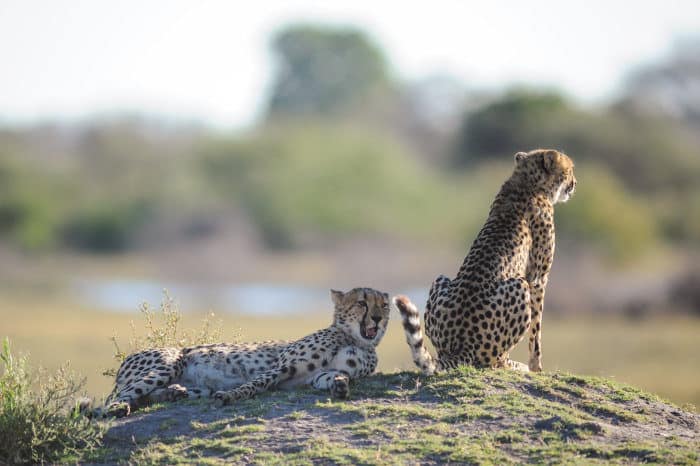 A female cheetah is very independent and will have several male partners over a large territory. Female cheetahs will be on heat at three to four different times in the year, until they become pregnant.

She will mate with the male and they might hang out for a maximum of two days. Then she leaves the male to continue her solitary lifestyle. So daddy has nothing to do with his baby cheetah.

During a gestation period of approximately 90-95 days the expectant mother will look for the perfect birthplace and the baby’s first den.

The Importance of the Den 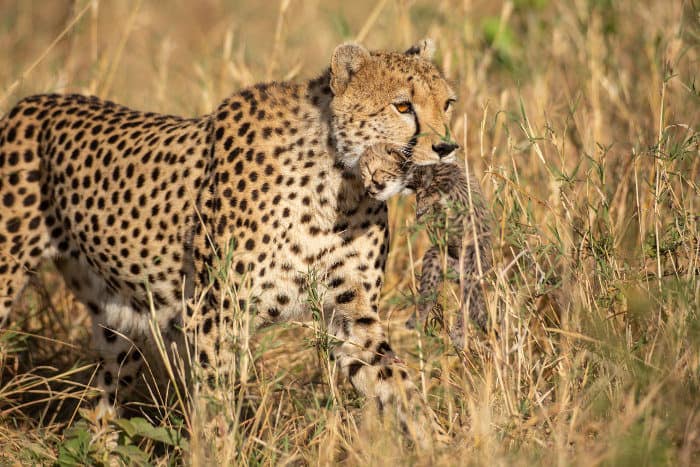 The mother will continually roam her territory considering the best option for dens. Due to the high risk of infant mortality, when a mother leaves her cubs to hunt she must be certain the den is predator proof.

The den will be well placed in a bushy or rocky area, away from potential harm. The den will have to keep the cubs safe from overhead predators (birds of prey), lions, hyenas, leopards and snakes.

The mother of the cubs will scout for new dens each time she hunts and will move the cubs every three to six days, just like a leopardess does.

A cheetah mother will give birth to one to eight cubs.

Wow eight! That’s a lot to care for!

The average is four or five cubs but don’t expect them all to make it.

When baby leopards come into this world they weigh 500-600 grams and are approximately 16 cm in length. Just consider how small this is.

A baby cheetah is tiny, weighing just half a pound (250 grams). 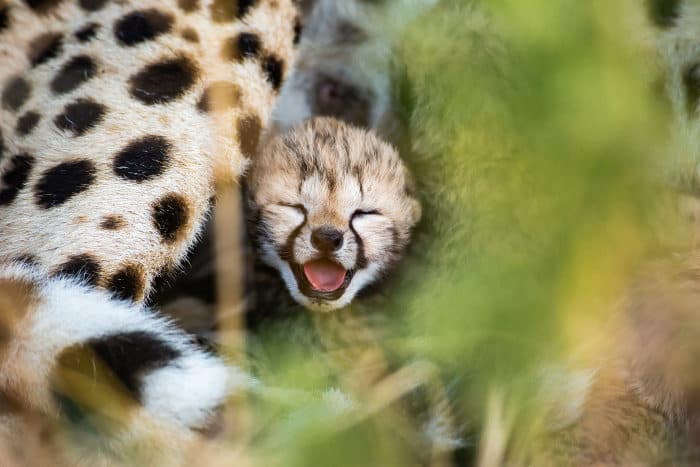 Baby cheetahs are helpless and blind when born. Their coat is their most prized characteristic as it is thick, grey and long.

The coat is called a mantle and it runs from the back of their neck to their rump. The mantle resembles that of a fierce honey badger and helps protect the baby cheetah through camouflage.

The lush mantle also regulates their temperature and protects against the climate (like wind, rain and sun).

Their eyes are closed and their spots very faint at birth, although you will be able to see the black tear-like stripes on their faces. 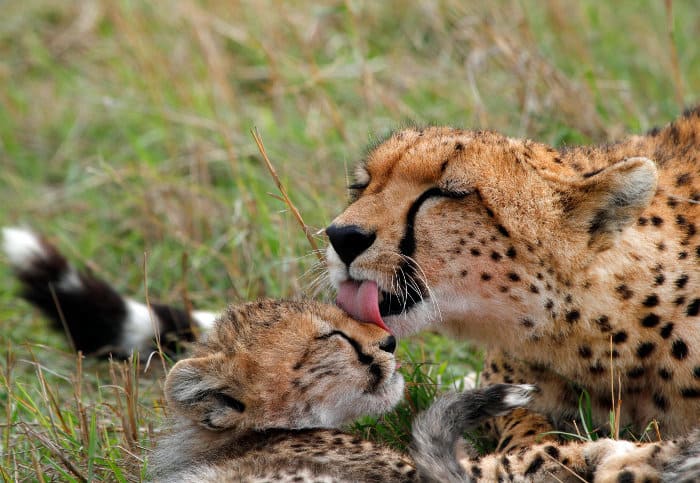 Even though the mortality rate of cheetah cubs is high, cheetah mothers do a really good job.

Once born she will lick them clean and this will turn into grooming as they mature. She will constantly be on high alert, on the lookout for potential threats.

As cheetah mothers are very maternal they will purr over the cubs whilst nursing and grooming. They will lie with them when they are not hunting to provide warmth and a safety net.

The sound cubs will make at this stage

They do this for her attention and affection. This she provides lovingly and patiently during this time.

After a few days 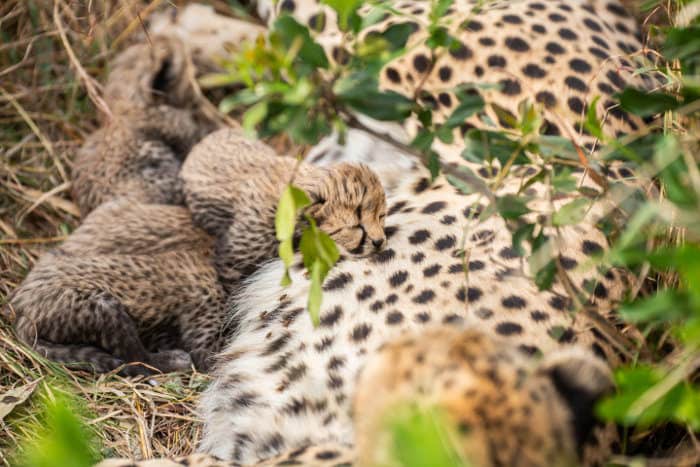 Once born baby cheetahs will mostly be nursing and sleeping. As their eyes start opening from ten days they will finally start crawling.

Their eyes will fully open around 12 days. After this time they will become more active, and finally start to stand and walk around.

The cubs become curious and active with their siblings and mother. They will start to play and explore.

This is a crucial time for the cubs as they tend to wander away from the den. The cheetah mother will have to find a safer den for them to do this, as well as keep them together when she goes to hunt.

This period marks the time when the cubs’ teeth will appear and they will be able to start eating small pieces of meat. 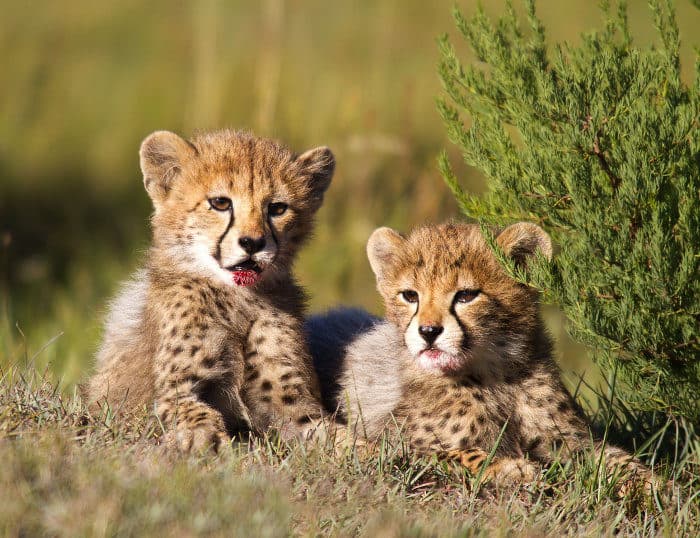 When the cubs reach six weeks of age they will be strong enough to accompany their mother on hunts. They will trail behind her and from this time onward they will not leave her side.

This side-by-side exploration will continue until they are old enough to leave their mother’s protection, usually at 16 to 24 months.

The mother nurses her cheetah cubs for up to 3 months, although she will introduce meat from three weeks onward.

Cheetahs have a small gene pool, caused by centuries of inbreeding. Their immune systems are compromised by this and careful nursing is crucial for a baby cheetah to reach adulthood. 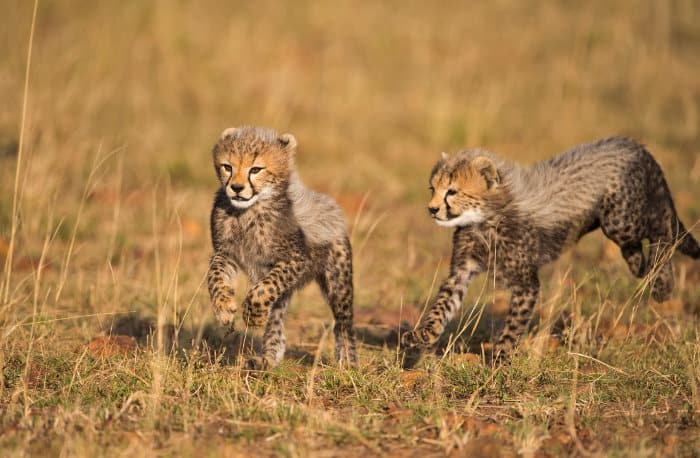 Their beautiful but deceptive mantle starts disappearing from four and a half months and their distinctively cheetah spots will appear.

Black tear tracks on their cheeks will become prominent as they spend more time roaming. These black tear tracks help to counter the glare they will experience on a hot savannah day.

It is estimated that a cheetah’s coat will have about 2000 spots! You may be able to count them on a baby cheetah, but the baby will soon be running too fast for you to count.

How fast is a baby cheetah? 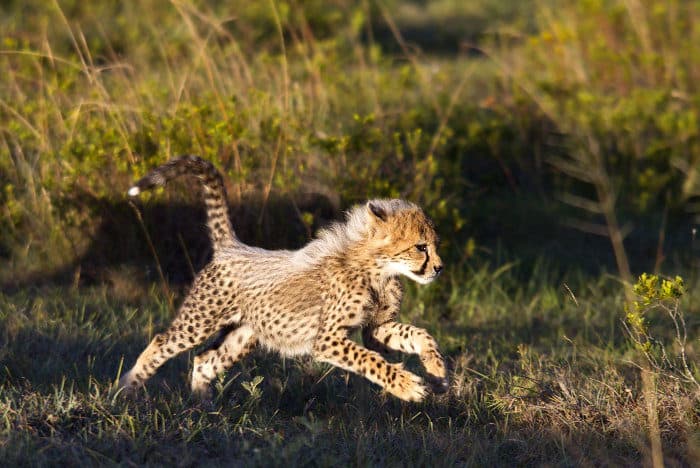 Baby cheetahs have no significant speed up to the age of six months.

They will crawl, walk, run, play and explore like any other wild cat cub. Yet, around the six months mark they will develop a key and strong eyesight, and will be running more than playing.

Speeds of up to 80 kilometers an hour have been recorded in six month old baby cheetahs. This helps them survive and outrun threats and predators from an early age.

What sounds do young cheetahs make?

As baby cheetahs get older the sounds they make change. The cheetah is an anomaly in its predatory range for they cannot roar.

Cheetahs have a missing floating hyoid bone in their throats. So they can’t roar, but make many different noises when they get excited, call or talk to another.

Baby cheetahs learn from their mother how to chirp (when excited they do a stutter-like bark), bleat (it is similar to a meow), growl, whir (sounds the cubs make when they quarrel) and yowl (an exaggerated growl).

How amazing these cats are with their advanced communication techniques!

The journey to independence 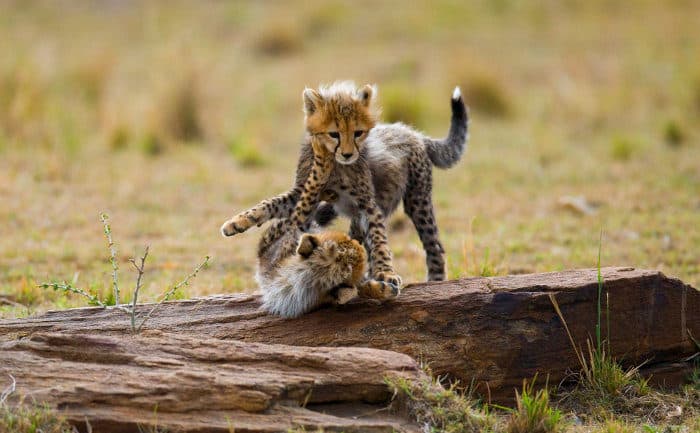 Thanks to its adaptation to the wild, cheetahs grow rapidly for the first six months. Around the eight month mark they will have lost all their milk teeth and be ready for hunting.

Cheetah cubs will play clumsily with their siblings and mother by stalking, pouncing and running. This type of play will teach the cubs independence skills, as well as build the strength required to catch prey.

During play they will attempt to catch anything, even a very large antelope – you cannot say that baby cheetahs are not confident! Fortunately, they will soon learn that not every potential prey is suitable.

A cub’s mantle starts to fade and shed from age four months and is gone by 12 months. Their spots will be distinctively their own. Black tear-like stripes and large eyes will be prominent.

The stripes and tear-like streaks help other cheetahs to read facial expressions.

Their small round ears will be very active and pitched trained for the movement of any predator or potential prey. Their tail will be long with black spots and rings with a strange white tip.

At the age of approximately 16 months the cubs will be fully grown. They will reach their top speed at this time of their development.

The time for a baby cheetah to leave 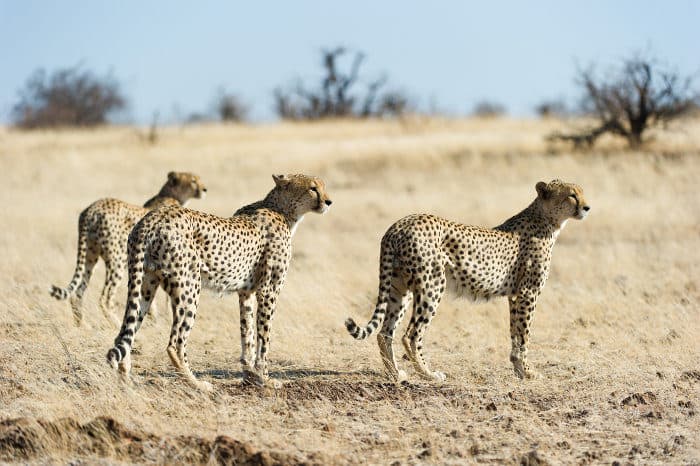 Cheetahs are not as antisocial as leopards, yet not quite as socially adept as lions. The mother and her young will stay together until she is ready to leave and roam freely – this is usually due to her being pregnant again.

Female youngsters eventually leave their mothers to explore a solitary life. This need for independence usually occurs when they reach sexual maturity of approximately three years.

The female cheetahs’ need for independence is something to be admired and may help with gene pool diversity.

Female cheetahs are surprisingly not territorial and will often pair with other mothers, sharing dens.

In comparison, male cheetahs often stick around with their male siblings and hunt together.

A group of cheetahs are called a coalition and some solitary males may join another to hunt together. This helps the coalition to maintain and hold their territories more successfully.

Due to the nocturnal behavior of other big cats, the cheetah has adapted to hunt during the day.

Hunting is usually attempted in the morning or afternoon when the sun is not at its hottest. They will hang out in nature’s finest savannas and thick vegetation waiting for potential prey. 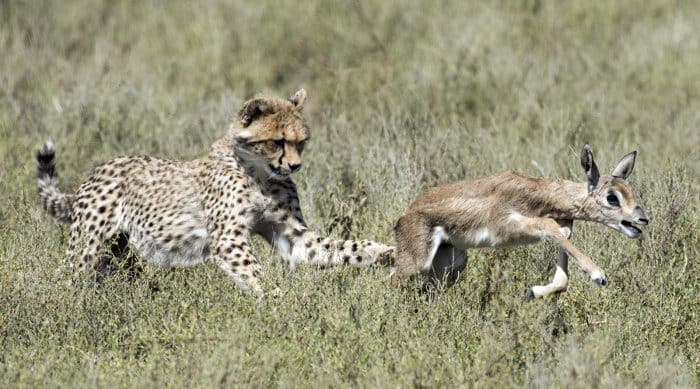 A young cheetah will start to hunt and eat small antelopes. They are not as agile or as wise as a mature cheetah in catching their prey.

At a young age they will only be successful in one in ten hunts. But by three years old a strong cheetah can be catching prey on half their hunts.

After a successful hunt they will usually be too exhausted to start eating. They will eat almost everything but the skin and bones. However, cheetahs will not eat from other dead corpse neither will they return to an old carcass. 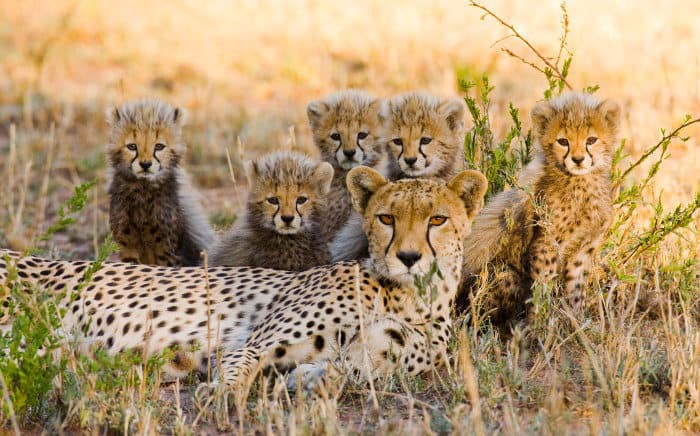 Baby cheetahs are at the mercy of their environment. They face natural threats like other large cats such as leopards and lions, hyenas, eagles and snakes.

In the first three months of life, baby cheetah mortality rate is as high as 75%. This is partly due to the fact that a cheetah mother has to leave them alone when she hunts.

Habitat loss contributes to this mortality rate. Cheetahs have lost 91% of their historic range and with less good habitat there are fewer safe dens.

Then there is human threat to baby cheetahs. Poachers of cubs sell them as pets and these cubs seldom survive in captivity, as they do not receive the nutrition a mother can provide.

After the three month mark 40% of cheetah cubs die from weak and underdeveloped immune systems.

The overall baby cheetah mortality rate is 90% in the wild.

Nine out of ten baby cheetahs will not make it.

In the early 20th century there were almost 100 000 cheetahs in the wild. Recent IUCN numbers show that there are only approximately 10 000 left roaming free.

Cheetahs are popular as pets for they make good hunting companions, are easy to tame, and pair with large dogs. Unfortunately cheetahs do not thrive in captivity.

Cheetahs also do not breed well in captivity and thus have contributed to their declining numbers.

It is essential that cheetahs remain in the wilderness!

The Future of Baby Cheetahs 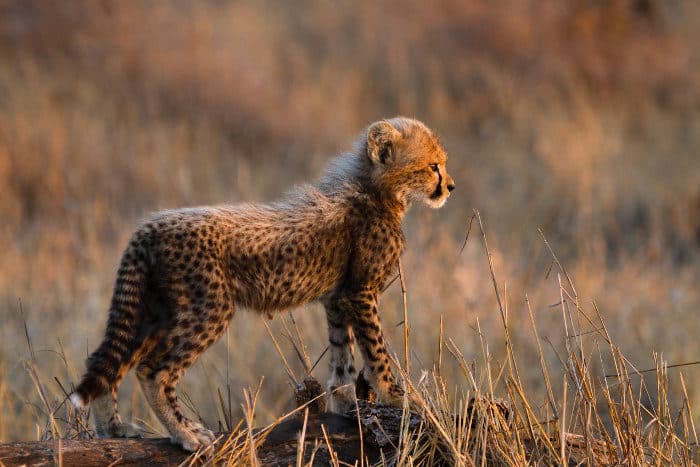 As humans we have a great impact on a baby cheetah’s future well-being; not all is good and not all is bad.

Poaching and habitat loss has been detrimental to the maintaining of cheetah numbers. The cheetah is now at grave risk of extinction.

The good news is that there are wonderful cheetah sanctuaries helping to rehabilitate baby cheetahs back into the wild.

You can support cheetahs by spreading the news that it is best to leave them in the wild!