Every domestic cat you will ever see is descendant from the African wildcat.

Whatever the cat, whether a tabby pet or a hybrid designer breed, their origins will be a wild species that continues to roam the African savannah.

African wildcats tough it out with lions and leopards. They are expert hunters and can fight for their food.

These beautiful animals are misunderstood. Nobody cares too much about an African wildcat.

There are more impressive sights on safari. People outside Africa prefer to stroke and feed their own cats.

Here’s the story of an animal that has changed many people’s lives. Without the African wildcat, you wouldn’t ever have a pet cat. 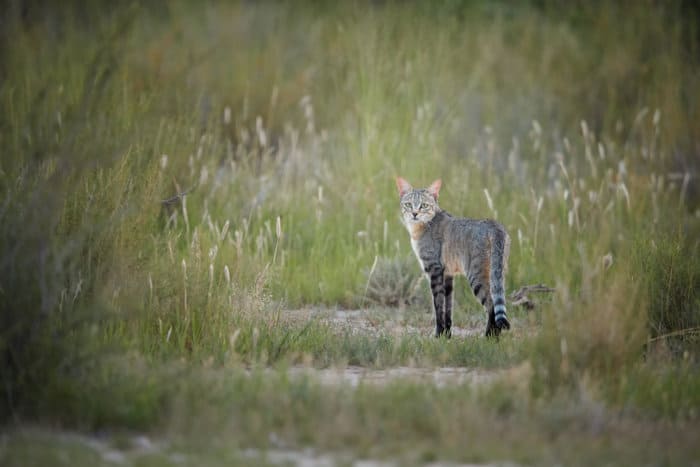 In comparison, the African wildcat (Felis silvestris lybica) seems a little plain. Males weigh between 4-6 kg, slightly more than mature females. These cats are less than a metre long although this still makes them bigger than almost all domestic cats.

At first glance these wild cats are easily mistaken for domestic cats. African wildcats have much longer legs and this is the best way to tell the species apart.

Ever wondered why many cats have sandy brown or yellow-grey fur?

It’s the perfect colour for a wildcat to camouflage itself in the African savanna.

Like many other cats, females give birth to between two and five blind kittens. They can reproduce quickly, with gestation lasting just two months.

After five to six months with their mother, kittens leave home to find their own territory, and they will be sexually active at one year old. 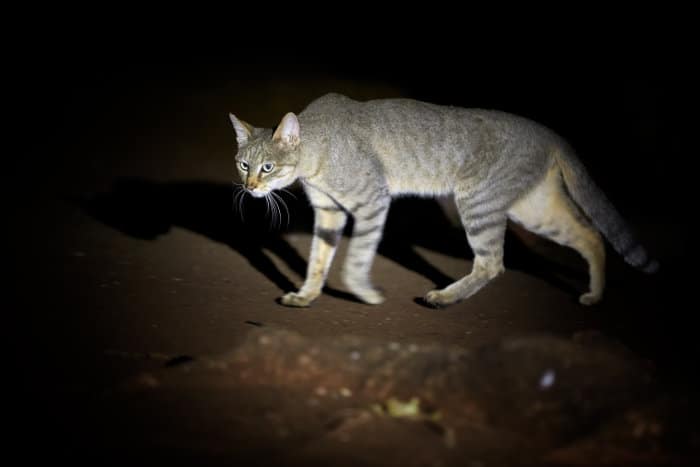 Domestic cats mostly eat cat food. They usually dine on food from a tin but can also turn to be expert hunters.

Domestic cats like to leave presents for their masters (or people who give them food). Everybody knows of cats catching mice, it’s a behaviour older than Tom & Jerry.

Surprise surprise, the African wildcat primarily hunts mice and rats. Except with this wild species it is survival of the fittest, because there isn’t a pet shop nearby.

Small birds and reptiles supplement their diet, along with a few tasty insects.

You may have seen a cat hunting. They approach prey slowly and carefully, then pounce quickly from a distance of one to two metres.

Except the African wildcat isn’t content with a few rodents. Out on the savanna it will hunt small baby antelope as well.

They’ve even been known to take down impala, an animal that’s twice their size.

African Wildcats Are the Original Cat 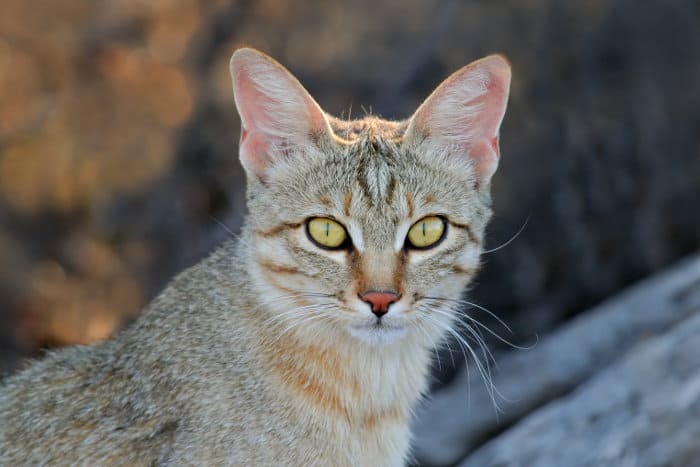 Let’s go all the way back. 37 carnivorous species of the felidae family evolved from a single ancestor.

Lions, tigers, leopards and jaguars are part of the panthera genus that evolved around 5 million years ago. Pumas and cheetah are another genus and branch of the feline ancestral tree.

All these cats evolved to be bigger than their common ancestor. The African wildcat is the closest relation to the single shared ancestor.

While other species evolved it has mostly stayed the same.

Cats were first domesticated by the Egyptians 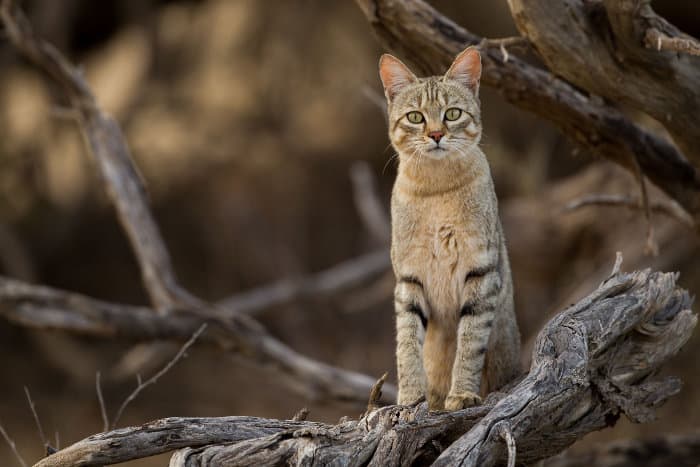 Around 4000-6000 years ago the Ancient Egyptians discovered they could domesticate this cat. Not for personal pleasure – they didn’t need to stroke a pet – but to tackle rampant rat and mice populations.

Domesticated wild cats lived in Egyptian granaries where food was stored. They ate rats and bred with each other. Wealthy Egyptians soon had kittens, which were sold to other wealthy Egyptians.

In a few hundred years these newly domesticated cats spread all across North Africa and the Middle East.

Now there are an estimated 600 million domestic cats on the planet.

Threats to the African Wildcat 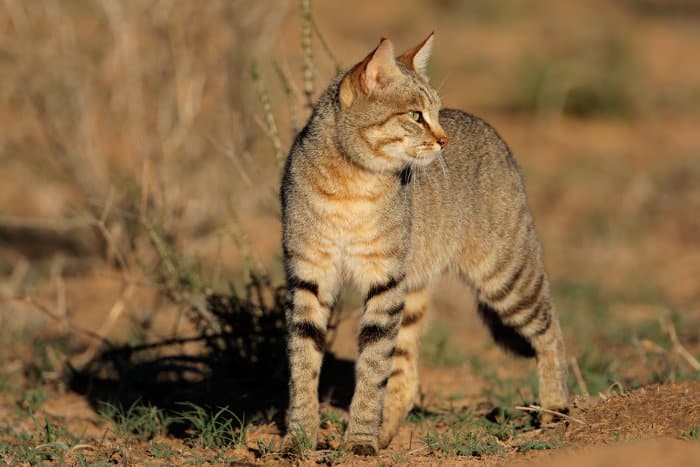 Nobody is sure of the exact African wildcat population but the IUCN declares that their population is declining. It’s certainly less than 600 million. It’s probably not more than 100 000.

Their existence as a species is threatened by similar factors impacting other cats, such as lions and leopards. Primarily their habitat is being lost through destruction, degradation and fragmentation.

While lions and leopards are hunted, African wild cats suffer from a different human challenge. They are bred and hybridised with domestic cats, so it’s very difficult to find an original African wildcat.

The two threats supplement each other in a dangerous alliance. Habitat loss forces wildcats to agricultural landscapes where they can still hunt rodents.

Here they mate with domestic cats, which spreads lethal disease and kills off future wildcat populations.

Encountering an African Wildcat on Safari

Okay, so it doesn’t get the heart racing like a leopard or lion. Nor is this animal as animated as a jackal or hyena.

African wildcats are a sight for safari aficionados. They are nocturnal and shy, so it’s rare to see them on any daytime safari activity. Nighttime game drives provide the best opportunity.

Wildcat populations only thrive in areas far from human encroachment. So you will need to visit vast savanna and grassland areas.

The Serengeti National Park is a good option. One Africa Freak contributor encountered mating wildcats on these famous grasslands.

Otherwise, good luck! Put this special creature on your tick list and you will keep returning to Africa to finish your list!

And remember, it’s so much more real when the animals are wild rather than domesticated.