As the heaviest land animal on earth, it’s no surprise that elephants give birth to big babies.

More than an average human!

Like humans, baby elephants are dependent on their mothers for a long time. If an elephant calf makes it through this vulnerable stage, it will grow into one of Africa’s most iconic animals.

Now you can answer the question: “How much does a baby elephant weigh?” But a baby elephant’s weight is one of many interesting facts about these cute critters.

What is a Baby Elephant Called? 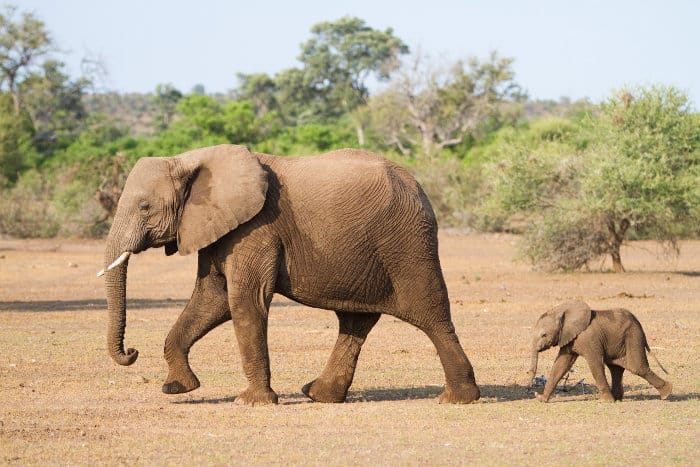 Despite the terms, elephants aren’t closely related to cows. Well, that’s not entirely true. They’re related to sea cows, a colloquial term for dugongs and manatees.

But the term ‘calf’ is used to describe lots of animal babies, from aardvarks to antelope, whales to walruses, and many more.

Baby elephants may not be unique when it comes to their name. But, if there was an award for cuteness, elephant calves would be right at the top.

How Long is an Elephant Pregnancy?

Spare a thought for elephant mothers. Not only do they give birth to the world’s largest baby (on land), they have the longest gestation period of all mammals.

An African elephant’s gestation period is up to 22 months, slightly longer than an Asian elephant’s. No wonder the calves are heavier than a human when they’re born.

Baby elephants heavily rely on their mothers after birth and still don’t have a fully developed brain. The calf learns to stand shortly after birth, but other skills take a lot longer to learn.

How much does a baby elephant weigh after a year? 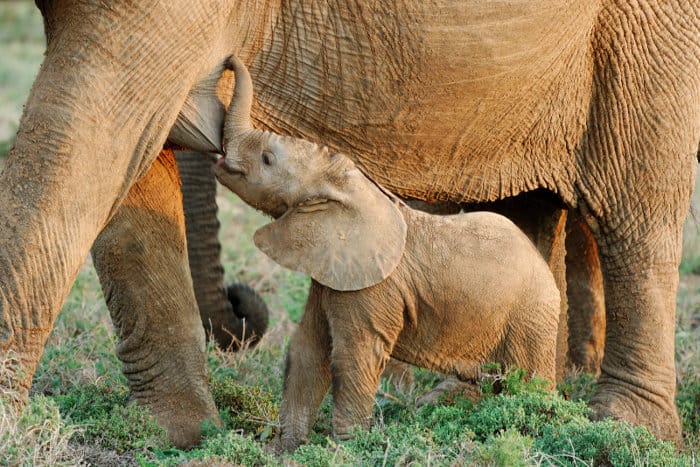 Elephant calves feed on milk for at least two years, and sometimes up to 10 years! Their mother’s milk is full of calories, fat, and nutrients, helping the calf put on a lot of weight in its early years.

It’s hard to put an exact figure on a baby elephant’s weight after six months, or a year. It depends on the individual and the sex of the calf. But San Diego zoo estimates that baby elephants put on 0.9-1.36 kg (2-3 lbs) per day in their first year.

Calves are born into tight-knit family communities of related females and young. Elephants live in a matriarchal society, with herds led by the matriarch, an older, larger female.

The matriarch acts as the leader of the herd. She has a big say in important decisions, but there is plenty of discussion and teamwork.

Female calves will stay with the herd even once grown. Adolescent males drift off to live a solitary life or form ‘bachelor herds’ with fellow males.

Yet independence comes much later than for many species. A lot of males stay with the herd well into their teenage years.

While a calf’s mother has the biggest role, child-rearing duties are shared out among the herd. Baby elephants rarely stray far from an adult, and other females act as nannies.

They’ll guide the calves, teaching them what to eat and protecting them. This is known as allomothering. 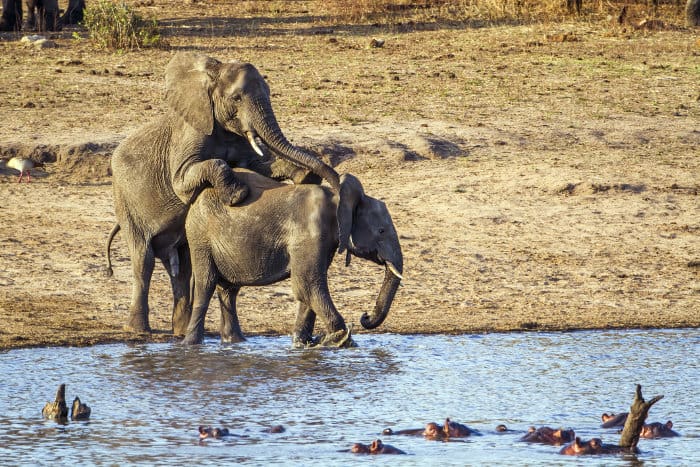 Most female African elephants give birth for the first time in their teens, almost always to a single calf (occasionally twins).

From then on, many females will give birth every three to five years or so. Some females continue to have calves at age 60!

Can Baby Elephants Use Their Trunks?

An elephant’s trunk is an incredible organ and not just a nose. Trunks contain over 40 000 muscles and elephants use them for breathing, drinking, and trumpeting as well as smelling.

With something so complex, it’s no surprise it takes a bit of getting used to. You weren’t in control of all your muscles at birth, either!

Baby elephants take a long time to develop. It might be up to a year before they can control their trunks.

In the meantime, they wave them about and sometimes even step on them. Once they have better control of their trunks, they can hold their mother’s tail as they walk.

Do baby elephants suck their trunks? 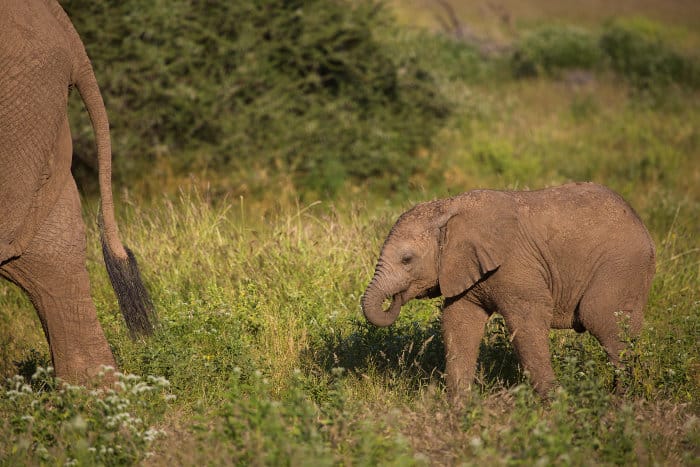 The comparison with human babies doesn’t end there. Baby elephants suck their trunks, just like a human child sucks his thumb.

And the reason is the same: comfort.

Elephant calves are born with a sucking reflex. Sucking on their trunk reminds them of their mothers, and food.

Do baby elephants have tusks?

Both male and female African elephants grow tusks, but newborn elephants don’t have them. Elephant calves’ tusks become visible at about two years of age. 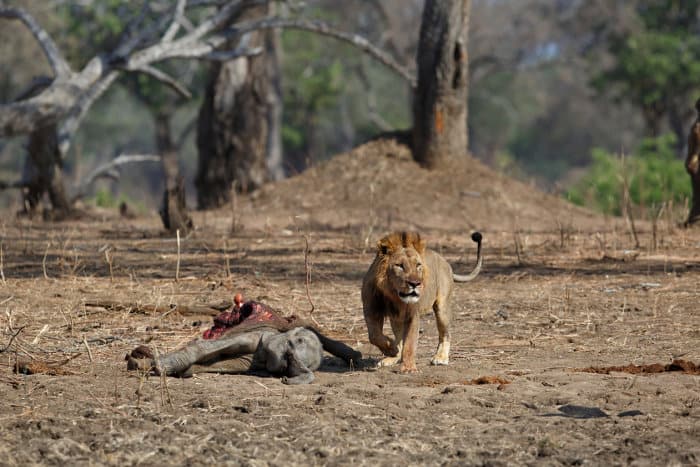 An adult elephant is usually safe from predators, but calves are sometimes vulnerable.

Given baby elephants’ weight, there are few predators that can take them down.

These include lions, crocodiles, and occasionally hyenas or wild dogs.

Getting to the calf is easier said than done. Elephants have strong emotional bonds to fellow herd members. The older females will encircle and defend the young, forming a protective barrier.

This is usually enough to see off elephant predators. Even if a hunt is successful, elephants will often take ‘revenge’ on the animals responsible. This discourages most attempts.

But the biggest risk to elephants as a species is humans.

What happens to orphaned baby elephants?

Sadly, ivory poaching orphans many baby elephants. Sometimes, a lucky calf will be taken in by another mother in a breeding herd.

But resources are scarce. Mothers will not share their milk if it puts their own calf at risk.

If the elephant calf can’t get milk, then it won’t survive. Thankfully, some orphaned elephant calves are saved by humans and hand-reared. 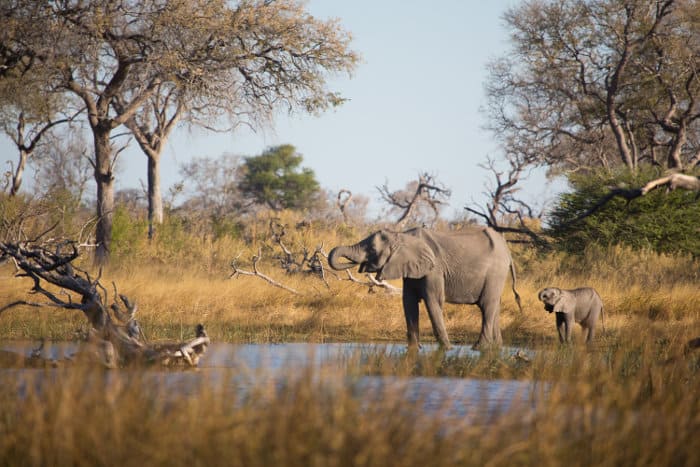 If you’re wondering “how much does a baby elephant weigh?” we hope we cleared that up. A baby elephant’s weight is important for keeping it safe in its early years. But even more important is the support of its family.

Elephants are incredible, intelligent animals with differing personalities and close bonds. Hopefully, many more elephant calves will be born and we can conserve these creatures.

Head out on safari and maybe you could get a glimpse of an elephant calf peeking out from behind its mother. 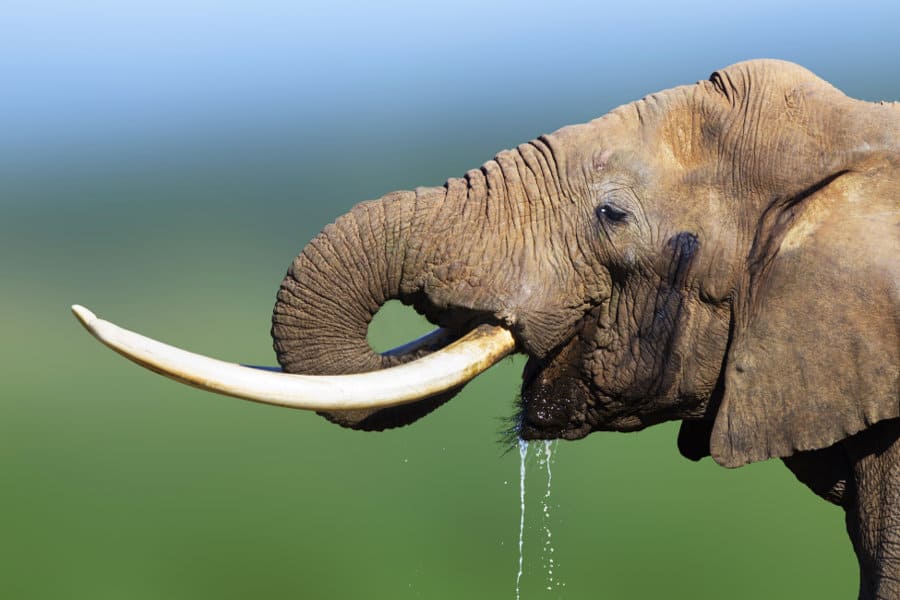