Are you wondering, “what sound does an elephant make?”

Click play below, and you can listen to the different noises. How would you describe it? A trumpet? A snort? A rumble?

All three would be correct because elephants can make a huge array of sounds — some of them at a low frequency that humans are unable to hear.

In this article, we explore all the different elephant noises.

You’ll also learn about what each sound is called, what they mean, and how they’re made.

Then you can find out where to experience an elephant orchestra in the wild!

How Does an Elephant Sound?

What sound do elephants make? Well, these giant African animals make a variety of sounds, including rumbling and trumpeting.

Trumpeting is the sound made by pushing air through the trunk. Elephants use this when highly stimulated.

Rumbling is the regular form of communication with each other.

Sound of Elephant: Different Noises and What They Mean

What does an elephant sound like? Many will say a trumpet. However, there is more to their vocabulary.

Here are the different noises elephants make and what they mean. 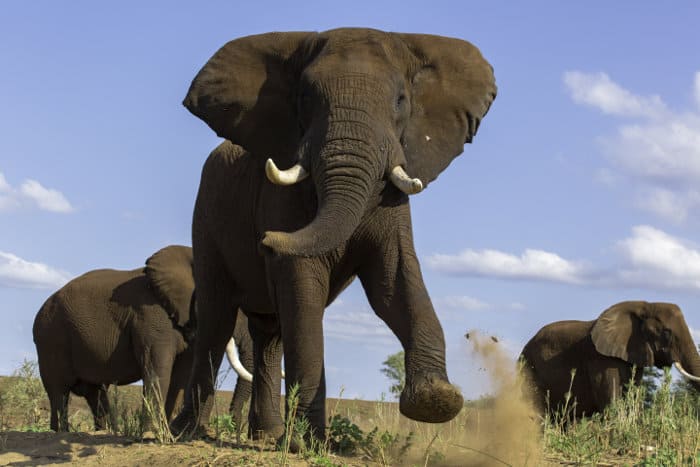 There’s no wild sound to rival that of an elephant orchestra. Different pachyderms start trumpeting at the same time, and soon it’s a brass band of noise that echoes far into the distance.

Trumpeting is the elephant’s most recognizable sound, certainly to our ears. They emit it when stimulated.

They may also do so when feeling excited and playful. However, trumpeting is also used when an elephant feels lost, angry, or surprised.

You can compare trumpeting to people shouting. It’s a noise you make when excited or annoyed, but it could mean many different things.

Like shouting, trumpeting is a way for elephants to warn others and get others to notice you. It’s usually a sharp, high-pitched sound that continues for a couple of seconds.

For example, an elephant will do a short trumpet blast to alert the herd to a lion in the nearby bush.

Or when one of the pachyderms is really annoyed, they will make a long trumpet sound to warn everything around: they are coming through, and they’re not stopping.

And like we do with shouting, it’s the sound that elephants make when they are super happy and playful.

It’s just like a schoolyard full of children running around and shouting.

Most mammals make noises with their larynx or voice box, as it is also known. Elephants do as well. However, the trumpet sound is a result of the elephant pushing air through its trunk. 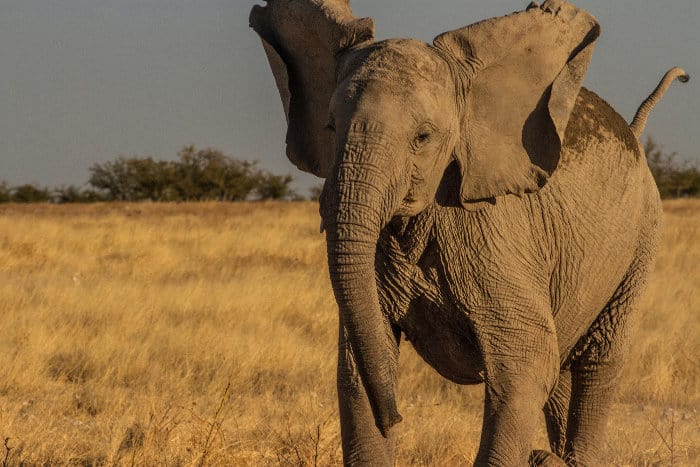 Trumpeting is the most famous and recognizable sound from an elephant’s vocabulary, its high-pitched tone heard for miles around.

However, most elephant sounds are actually rumbles. These low-frequency sounds can travel over long distances. They use this for everyday communication.

Turn the bass up on your speakers or headphones because rumbling is a beautifully resonant sound, a little like a cat purring but deeper and more sonorous.

Rumbling is created by the larynx. They use this sound to convey messages to fellow elephants.

Some elephant rumbles are at too low a frequency for the human ear to pick up. These low frequencies travel the longest distances. This helps the elephants communicate with other elephants that are far away.

Rumbling is like talking is for humans. Baby elephants make a begging rumble so they can suckle milk. Baroo rumbles send a message that the elephant feels upset or uncomfortable.

When males are searching for a mate, they emit a pulsating musth rumble. Females respond with their own estrous rumbles, making them as loud as possible so they can alert more males.

There are many different rumbles used for greetings and to persuade the herd to do something.

In the wild, you can sometimes hear many elephants rumbling at once, which means they are having a conversation and deciding what to do or making a greeting with each other.

You can also hear social rumbling when elephants get upset, such as when one of their herd has died.

A sharp, high-pitched trumpet is usually enough to scare away a lion or get a safari vehicle to move.

That sound is sometimes combined with rumbling, which may be a call for help.

However, when elephants don’t get their way, they can also roar.

Roaring is a highly powerful rumble that does sound like a roar. It’s often complemented by a trumpet blast.

Elephants will only use this sound in an emergency, such as defending against predators or warning off a rival herd.

Some researchers have argued that elephants make snorting and grunting sounds. These come from the trunk and sound a lot like the trumpet.

Nobody understands why but it’s probably due to the range of vocalizations made possible by the larynx.

Elephants have the ability to imitate their peers. So if one elephant makes a particular low-frequency rumble, it can copy it and respond with one of its own.

How Does an Elephant Make a Sound? 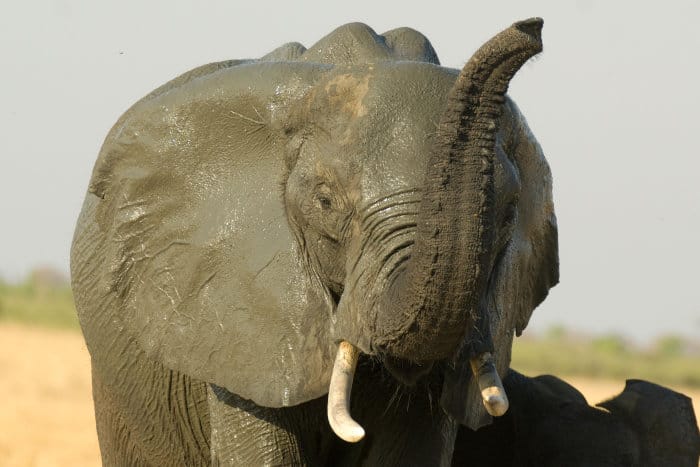 Now that you know the names of all the different noises these large mammals produce, let’s learn about how elephants make a sound.

As you may have noticed from the section above, elephants make each sound differently. How these animals produce a trumpet varies from the way they make a rumble or squeak.

For each elephant noise, the sound is produced by expelling air from the lungs. This passes over the larynx, causing it to vibrate at different frequencies depending on the sound the elephant is making.

By lengthening and shortening the larynx, the elephant is able to produce a variety of frequencies.

The elephant is also able to modify the sound it makes based on how it holds the various components of its vocal tract.

These components include the mouth, tongue, vocal chord, pharyngeal pound, and trunk.

For example, the wider an elephant opens its mouth, the louder the rumble it will make. And if they push the air out through their trunks, the resulting sound will be a trumpet. 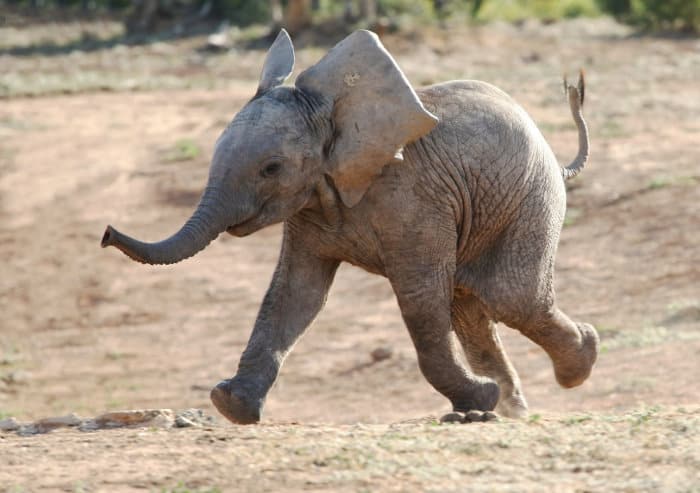 Now you know the answers to “what noise does an elephant make?”, but there is plenty more to learn about this special member of the Big Five. Below are several interesting elephant facts:

Where to Hear an Elephant Noise in the Wild 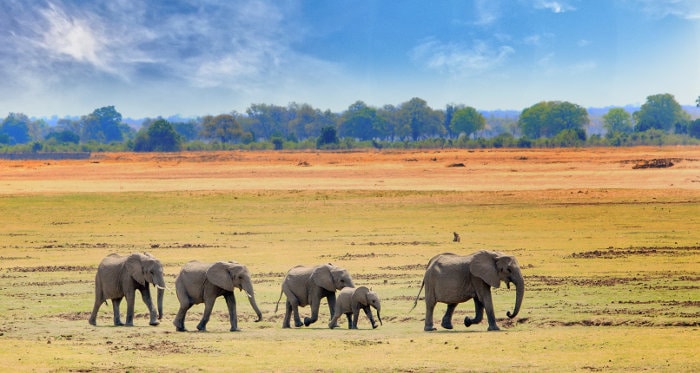 Imagine this — lying back in the tent, you listen to the wild. Trumpets. You can tell elephants are close by, but it’s far too dark outside to see them.

Through the night, you also hear rumbles, another piece of the nighttime lullaby.

Then waking up the next day, you see the elephant dung and ripped-up trees.

The giants were very close.

You set off on a game drive, and you encounter the herd.

You hear low-pitched rumbles, the odd alert trumpet, and perhaps a group of elephants communicating together.

Because they are so big, they are relatively easy to see and hear.

However, elephants have large ranges and do not occur at every safari destination.

Chobe National Park in Botswana is home to the world’s largest elephant population. Many of these elephants migrate to parks nearby, such as Hwange in Zimbabwe.

Tarangire National Park has the largest elephant population in Tanzania, with herds of up to 300 rumbling and trumpeting near the riverbed.

In Kenya’s Amboseli National Park, you can witness elephants beneath the shadow of Mount Kilimanjaro.

Do You Know Each Elephant Sound Name? 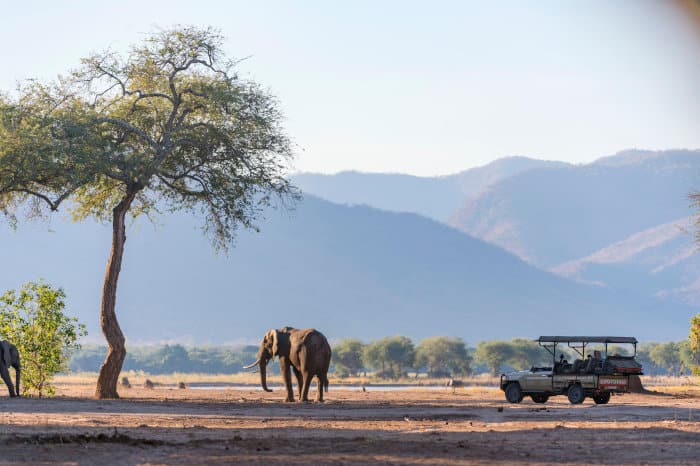 When asked “what sound do elephants make?” on your next safari, you’re sure to have all the answers. Whether a low-pitched rumble or a high-pitched trumpet, you’ll be able to tell the difference.

To put your knowledge to the test, visit any of the parks mentioned above. You can use our safari planning pages to help make your elephant dream a reality. Or check out these incredible deals.

Want to learn more before your trip? Here is everything you need to know about what elephants eat. 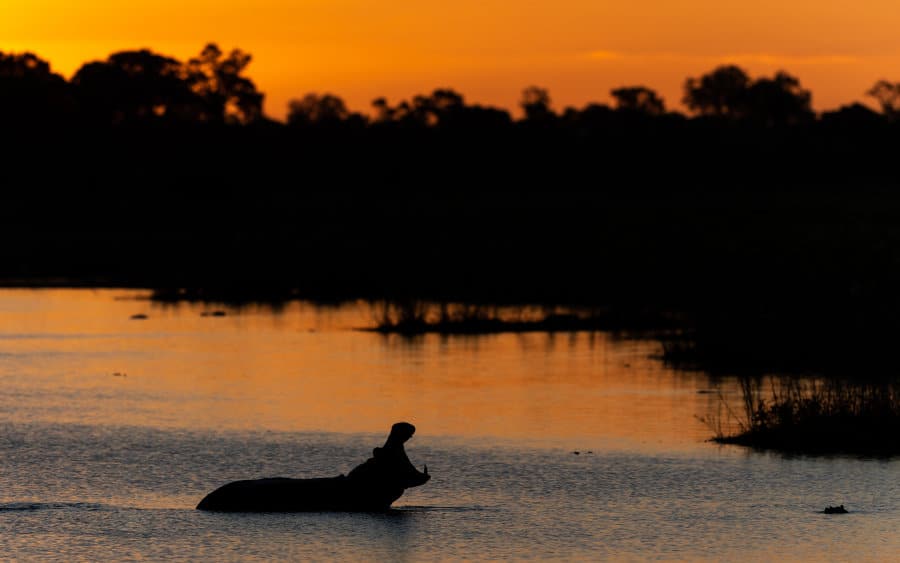 1 thought on “What sound does an elephant make? Learn how to name each noise”