Charging across the savannah come the fastest antelope species in Africa.

Tsessebe gallop with a peculiar gait, springbok hop as much as they run, and Thomson’s gazelle zigzag away from cheetahs.

African antelope will always provide beautiful moments on safari. It is even more impressive when you see the fastest antelopes in Africa running at high speed.

Swirls of dust follow their journeys. You must always look to see why the antelope are running so fast.

Encounter high-speed African antelope and there is a good chance they are running from danger, so you know to look for predators that lurk nearby.

In this article we celebrate some of the fastest antelope species in Africa. You will learn how fast these antelope can run, along with where to see them galloping in the wild. 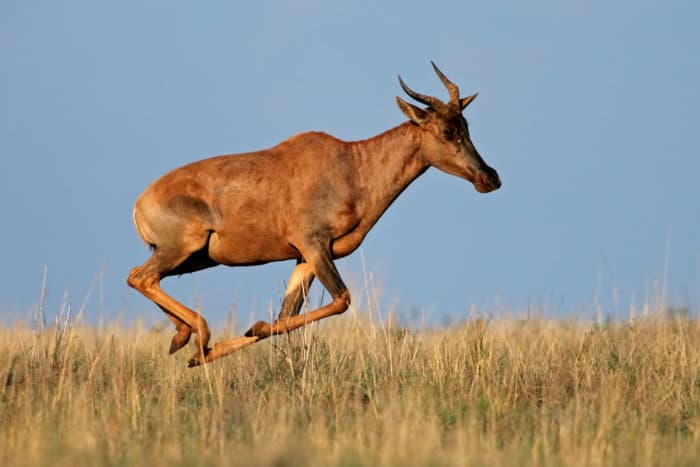 Occupying grasslands all across Africa, tsessebe are strange yet highly social antelope.

Males have been observed standing in parallel ranks, bobbing their heads in unison, with their eyes closed shut!

They are large and gregarious. And they are very fast African antelope.

Tsessebe have been recorded reaching speeds of over 90 km/h. That is faster than lions and not far behind the fastest of them all, the cheetah.

The Caprivi Strip in Namibia is a great place to see tsessebe running around. Kruger National Park in South Africa is another option.

You can also see them in the Serengeti but sighting them can become mixed up with all the other antelope that live there. 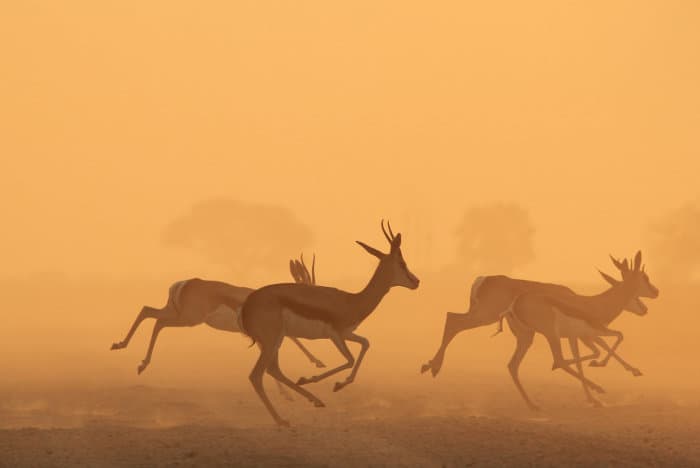 Springbok can be the highlight of any visit to South Africa. These cute little gazelles occupy all the country’s national parks and also graze close to urban areas.

You do not need to be on safari to see one. For example, springbok are a highlight of visiting the Cape of Good Hope.

Springbok run by making long hops over the savannah. Each hop can take them many meters and they have specially adapted legs that absorb all the shock.

The top speed of a springbok is 88 km/h. Continue reading the complete springbok story here. 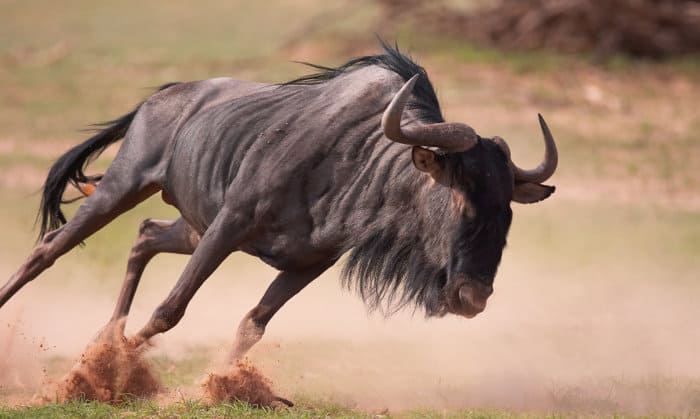 Wildebeest have poor eyesight, especially in the dark. They survive lions and leopards by gathering in large herds, where there are lots of eyes and ears sensing for danger.

Blue wildebeest run fast and not only when being chased. They can reach 80 km/h and are one of the fastest antelope species in Africa.

Serengeti National Park and Masai Mara are the best destinations for witnessing lots of wildebeest running around.

Over a million wildebeest graze in this ecosystem. During the mornings you can see them galloping around purely for fun, their ebullient faces a highlight of any safari. 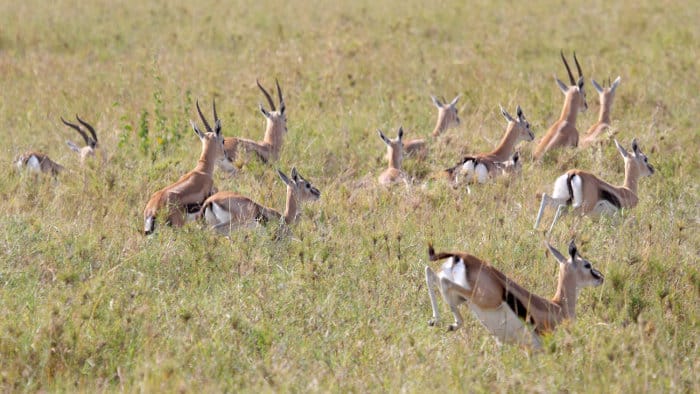 Another specialist you can view on the Serengeti plains, Thomson’s gazelle leap clear of the grasslands with every single stride.

Although small they have very strong legs that propel them high into the air. Not only are they one of Africa’s fastest antelopes, they are the African long jump champions!

80 km/h may not sound particularly fast, considering it is even a little slower than lions, leopards and cheetahs. But Thomson’s gazelle can maintain this speed over long distances. They turn sharply and use their stamina to evade predators. 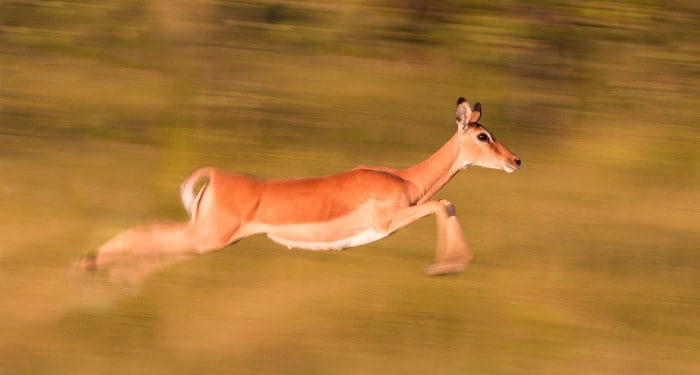 Impala are born to run. In fact, speed is their only real defence against predators. In contrast to Thomson’s gazelle, impalas hang out around woodlands, often where woodland meets more open savannah.

These elegant antelopes are very fast at running through trees. They are agile and nimble, so they can comfortably outwit their hunters.

Impala are capable of running at 80 km/h for significant distances, making them one of the fastest antelope species in Africa.

You can view common impala all over East and Southern Africa. For a special safari treat you can search for the endangered black-faced impala in northern Namibia. 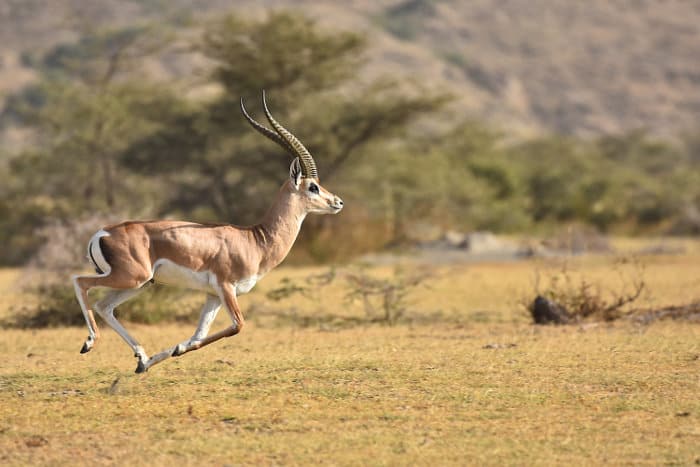 Larger and a little slower than Thomson’s gazelle, Grant’s gazelle are still one of the fastest antelope species in Africa.

They are a big meal for predators, with males weighing up to 80 kg. Lyre-shaped horns are a good way to distinguish Grant’s from Thomson’s gazelles.

You can also analyse how they run. Grant’s gazelle can run at 65-75 km/h but they do not make the same enormous leaps as their gazelle cousins. The Serengeti is a great place to see them, often alongside Thomson’s gazelle. 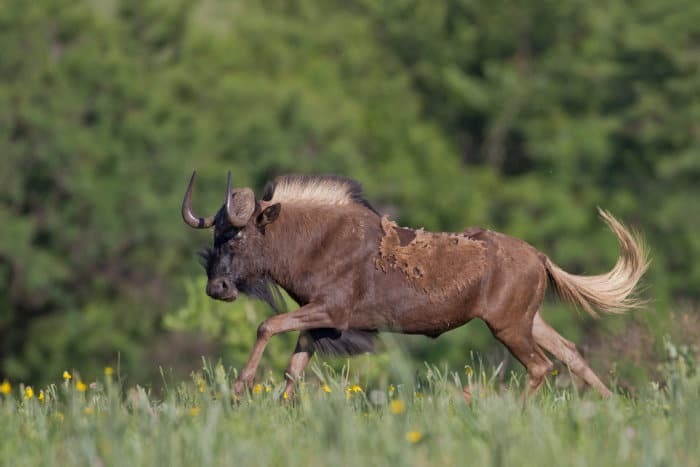 Black wildebeest look “somewhat” similar to blue wildebeest. When people talk about wildebeest they are usually referring to the blue species, the abundant antelope that forms the great wildebeest migration.

Black wildebeest have larger horns (that curve forward) but are smaller and lighter, with males growing to around 120-160 kg. They have long white tails and fierce black faces.

These wildebeest are expert runners and comfortably make this list of the fastest antelope species in Africa.

You can see them running fast in isolated pockets of Southern Africa, especially in open plains, grasslands, and Karoo shrublands. They can reach speeds of up to 75 km/h! 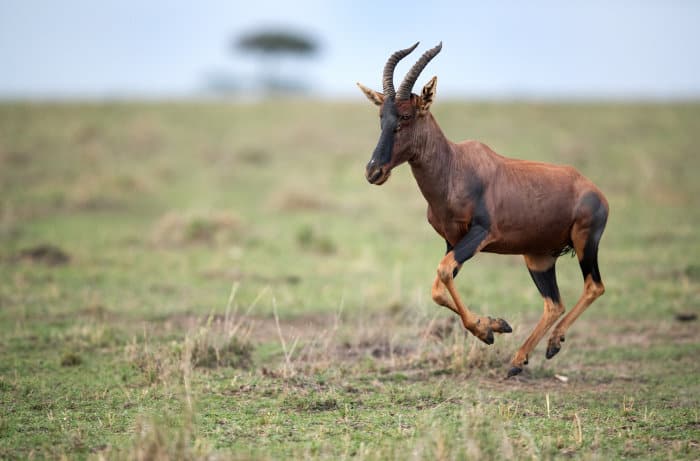 A relative of tsessebe, topi are highly social and very fast. But while they share a tsessebes’ speed and genetic characteristics, they look more like hartebeest.

Topi occupy arid savannah areas across Sub-Saharan Africa but are classified as vulnerable on the IUCN Red List.

Topi beat the speed gun at 70 km/h. However, not much is known about how far they can run. Usually they only run when frightened, in contrast to blue wildebeest that run for most of the day. 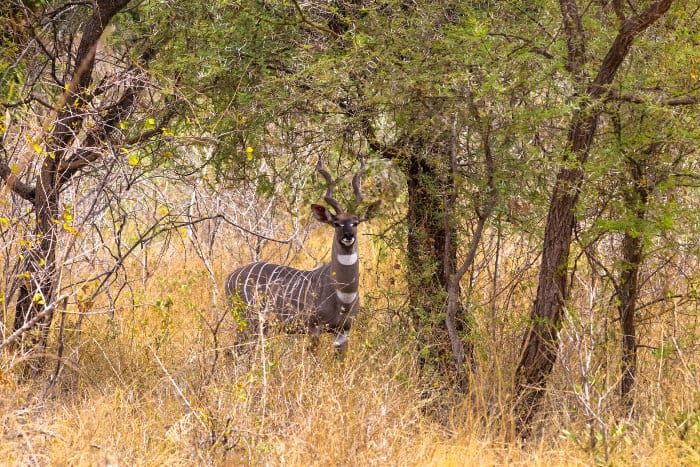 The greater kudu came up top on our list of the most elegant antelope species in Africa. They are also one of the largest antelopes.

Despite being large forest dwellers, lesser kudu are exceptional sprinters. They can run through the trees at 70 km/h, evading predators with sidestepping that any rugby player would be proud of!

Lesser kudu have a conservation status of near-threatened. You can see them on safari in northern Tanzania as well as Kenya and Uganda. 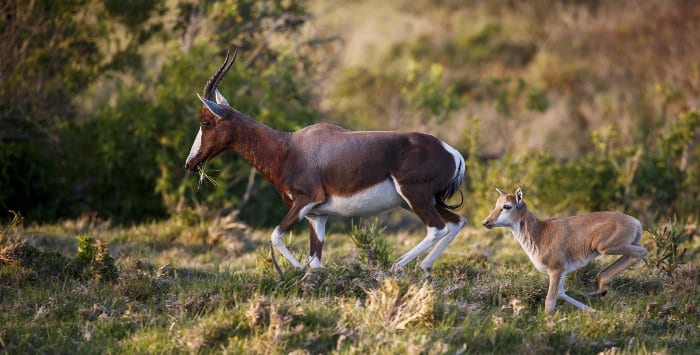 Also endemic to South Africa, bontebok were almost wiped off the planet along with their cousins, the blesbok.

Hunting was so rife that only 17 bontebok remained. 17! That was the entire bontebok population! Fortunately, bontebok can’t jump like many other African antelope.

One conservationist stood up and kept all the bontebok on a single private farm. Basic fences prevented them from escaping and colonialist hunters didn’t come onto private land.

Fast forward 100 years and the total bontebok population has reached 3000. That same farm is now gazetted as Bontebok National Park.

Not too much is known about the speed of bontebok but they have been observed sprinting at over 60 km/h in South Africa.

If you enjoyed this list of the fastest antelope in Africa you may also like our other antelope celebrations.