Antelope are beautiful symbols of Africa’s abundance and diversity. There isn’t just one type of antelope. There are over 20 species and each has its preferred habitat and way of life. The largest antelope species are a wonderful highlight of any safari.

On an African safari you don’t see a few antelope. Usually you encounter many thousands, from gemsbok skipping across the dusty savannah to hartebeest with their bashful behaviour.

You don’t always need to be on safari. Sometimes you’ll see antelope by the side of a road or even near a beach, such as springbok in South Africa.

After a few days on safari you’ll learn how to recognise a kudu from a hartebeest from an eland. To get you started, here are the top ten largest antelope species in Africa and the best places to view them. 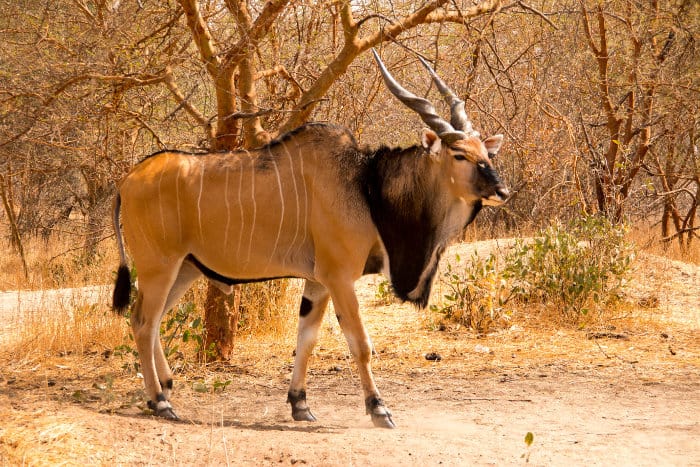 Spiral-horned and standing 1 m 80 tall, these beautiful creatures are also one of the rarest African antelope. They have short red coats and can weigh up to one ton. Most mature bulls weigh as much as a small car!

The giant eland is very difficult to see in the wild. They are classified as vulnerable and reside in the forests of West Africa, notably in Cameroon. For such big giants these animals can really move, hitting speeds of 70 km/h. 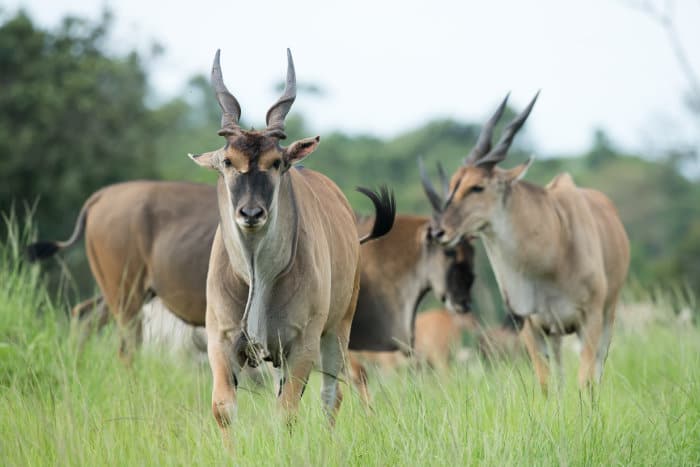 A little smaller than its cousin, the common eland is widespread and a regular sighting on almost any East or Southern African safari. It can live just about anywhere, from savannah to woodland and grasslands. The males weigh up to 900 kg!

Drive across the Karoo in South Africa and you’ll see common eland by the side of the road. Other than their size and spiralled horns, this large antelope species does look quite common. Incredibly, common eland can snap their hooves together in a special form of communication with their herd. 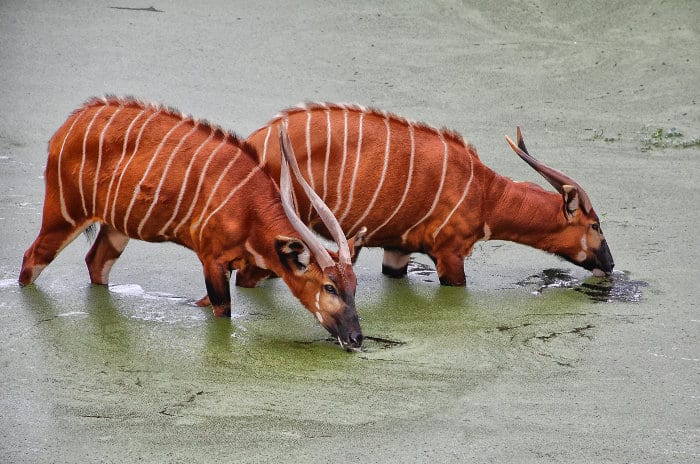 A strange name and a beautiful mahogany striped coat put the bongo near the top of most safari connoisseur’s tick lists. They are one of the hardest animals to spot in Africa.

Living in dense forests they have striking markings and stripes, which help them blend into the landscape. And the bongo is nocturnal, so you really need to be on a nighttime drive to see them. Search for them in Aberdares in Kenya, or in the tropical jungles of Central and West Africa.

Both males and females can be over three metres in length. Females are slender but the big bulls get pretty fat, with some weighing over 400 kg. 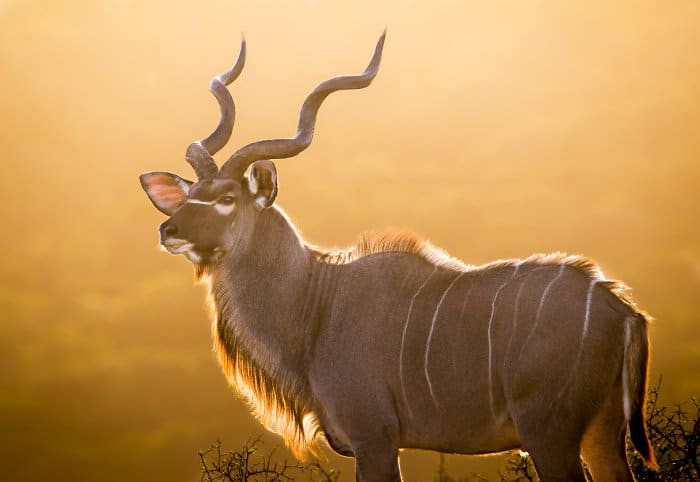 Beautiful long horns make greater kudu a spellbinding safari sight. Bulls can weigh over 300 kg and their horns are over a metre in length!

You’ll see them around the woodlands of East and Southern Africa, with great populations in Botswana and Namibia.

Males are easy to recognise while the females are harder; they have no horns and are about half the size. 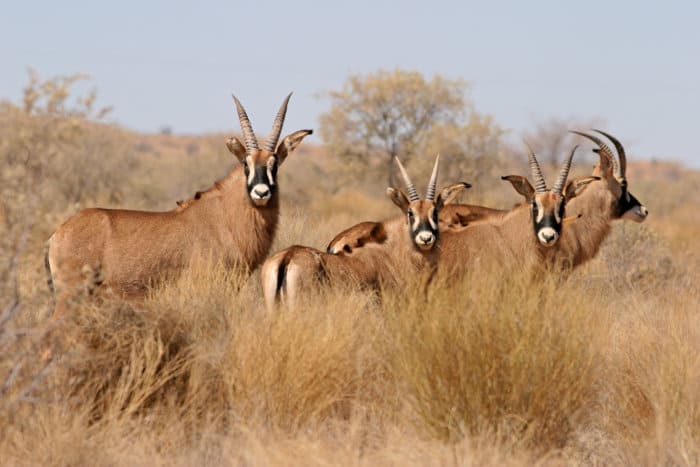 Looking more like horses than antelope, roan could be considered to be larger than kudu. Their appearance is mostly unremarkable, other than a striking face of black and white features. Roan is a chestnut colour and is how this antelope got its name.

Mature bulls weigh a little less than kudu, more like 240-300 kg rather than 270-310 kg. However, the roan antelope females are almost the same size as the males and are larger than kudu cows.

In comparison to the sable antelope, roan have shorter horns and are lighter in colour. The best place to see these antelope is in the Kruger, South Africa, or most of the safari destinations in Zambia. 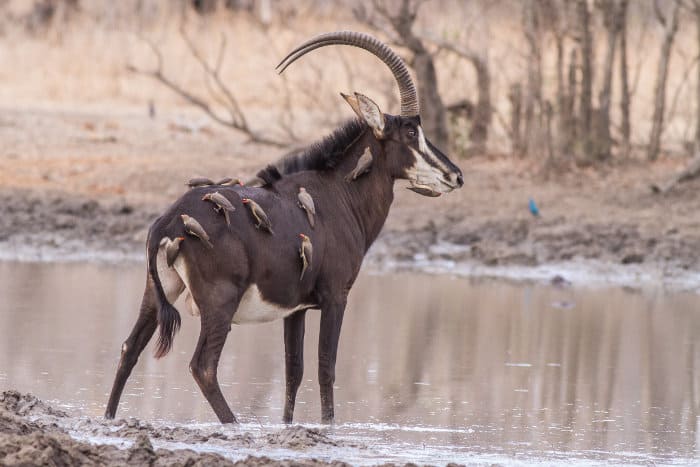 Shimmering black fur and dramatic spiralling horns are the standout features of Africa’s sixth largest antelope. Sable antelope have a strange tendency to fight while kneeling down, using their horns from a prone position.

Both males and females have these horns and they are a dramatic sight, best witnessed on the open savannah of northern Botswana or Zambia.

The best sightings are found around the Zambezi River, where some 235 kg of rumbustious fur is seen along the banks. Females are almost as big as the males but brownish in colour. Some sable weigh up to 270 kg.

Less than a thousand of the “giant sable” antelope remain in the wild. Slightly larger than the more common sable, these giants are the national symbol of Angola, the only country where they can still be seen in the wild. 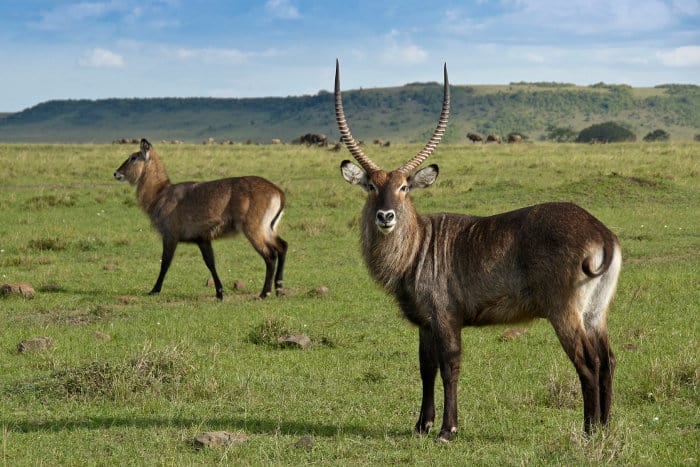 There are 13 subspecies of this widespread large antelope. Waterbuck look a little like domestic cows, with shabby brown fur and a generally sedentary nature. As their name suggests, you’ll usually see them at the water.

Waterbuck are common across Western, Eastern, Central and Southern Africa, found grazing close to rivers, lakes and waterholes. When attacked by predators they jump into water and escape using their excellent swimming skills.

These are sturdy animals and the males weigh between 200-260 kg. Females are significantly smaller and don’t have the same long, spiral horns. 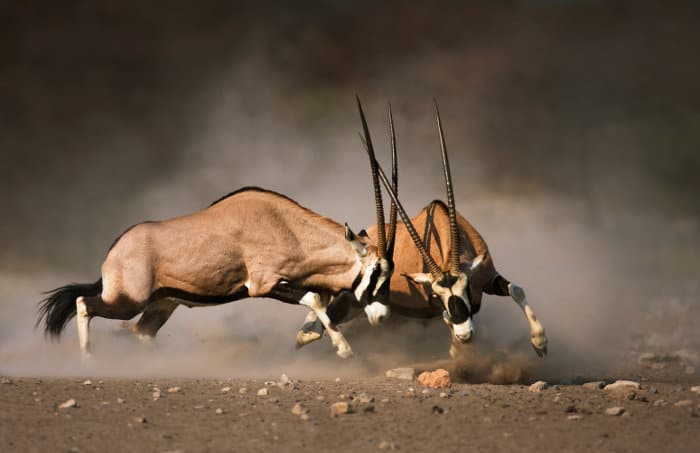 Grazing the arid plains of Southern Africa, gemsbok are famous for their incredible horns. Straight and true, these horns unfortunately make gemsbok a prime target for hunters. 🙁

Almost 400,000 live in Namibia where they are the country’s national symbol; you can’t visit Etosha and not encounter hundreds of them. They’re abundant all over the Kalahari in Botswana and northern South Africa as well. 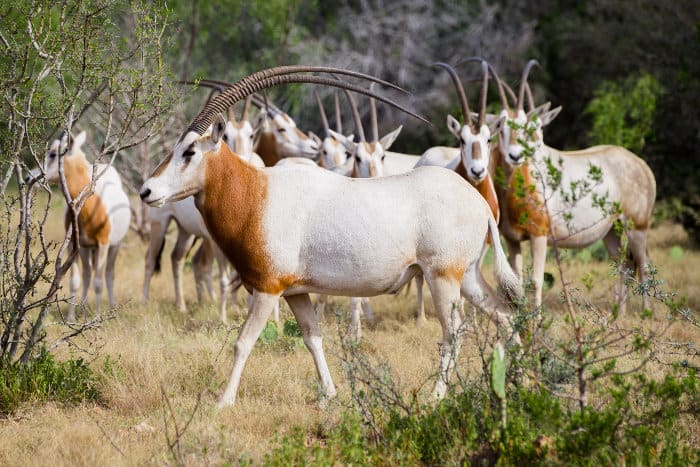 Sadly, scimitar oryx are now extinct in the wild. Males weigh 140-210 kg and great herds of them used to roam the northern Sahara. But not any more. 🙁

These brilliant creatures are experts in living in extreme heat and can take most of the water they need through the plants they eat. Now you can only see them in zoos or private ranches in the US (Texas and New Mexico mainly).

It is possible to see the beisa oryx in the wild, a smaller oryx subspecies that weighs just under 100 kg and has the same impressive horns. They’re native to northern Tanzania and various parks in Kenya, such as Tsavo West. 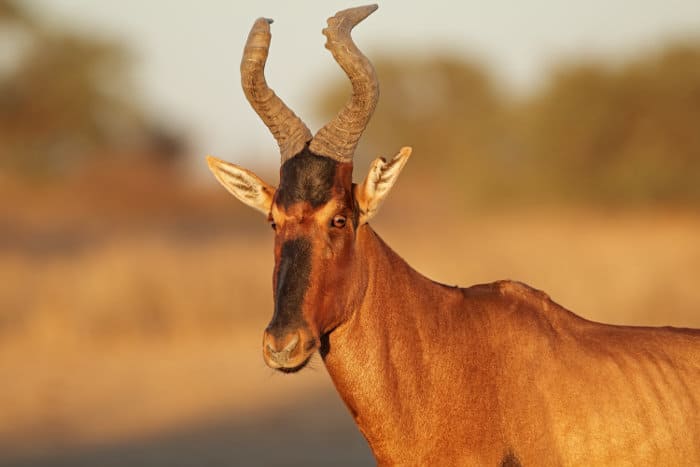 Hartebeest are usually easy to find but very hard to get close to. They are slow animals and don’t have a good defence against predators. Because of this they graze on open plains and have exceptional perception, so it’s very hard for lions or leopards to creep up on them.

That also means that people and vehicles can’t get close either. Of the nine subspecies, one is now extinct and five others are highly threatened. Big males weigh up to 200 kg and stand over a metre tall.

You’re most likely to see the Coke’s hartebeest on a Kenya or Tanzania safari, or the red hartebeest in the Kalahari (Botswana, Namibia and Northern Cape of South Africa).

What are your favourites from the list? If you need more inspiration then check out this article on the most elegant antelope species as well, which features animals like klipspringer and gerenuk.