San is the collective term used to describe an ancient, indigenous collection of Southern African hunter-gatherers. Comprised of several sub-groups, the San people have roamed the African continent as a distinct ethnic group for around 150,000 years.

This makes them one of the oldest people on Earth — which is a testament to their unique way of life and its long-lived success.

Also known as the Bushmen of the Kalahari, they are hunters and gatherers of tremendous skill, with complex social structures and enviable lifestyles. They’re a people with a fascinating and tragic history. And the story of their existence raises questions of human progress and the woes of modern society.

So let’s dive in, and discover the captivating tales of the San.

The Bushmen of the Kalahari 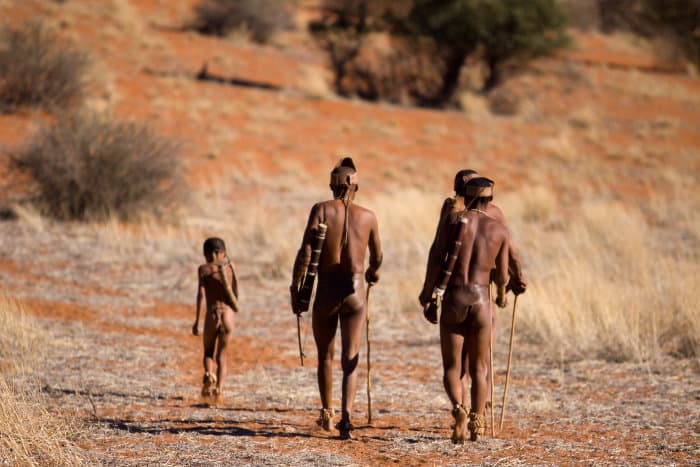 For around 20,000 years, the home turf of the San people has been the Kalahari Desert. It’s a semi-arid savannah that occupies a large portion of Botswana, as well as smaller sections of Namibia and South Africa.

The name ‘bushmen’ stems from the Dutch Colonists who settled in the region in the 17th century. It’s the English translation of the Dutch term ‘bosjesman’, which the settlers crudely bestowed upon the San when the two groups encountered one another.

The name ‘San’ on the other hand, comes from a different group of indigenous Southern Africans; The Khoikhoi.

The Khoikhoi were nomadic cattle herders who coexisted with the San. They referred to bushmen as ‘Saan’ which literally means ‘foragers’. It’s rooted in the term ‘saa’, meaning to pick things up from the ground.

Much like ‘bosjesman’, the name ‘Saan’ was a derogatory term. Yet, unfortunately, these two names were the ones that stuck. And today, they’re both accepted.

However, most San people prefer to go by their individual group names. These include !Kung, Tuu, Tshu-Khwe, Khwe, and others.

In order to successfully live in the harsh conditions of the Kalahari, the San people had to become familiar with their surroundings. Over millennia, they learned to work with their environment and reap what it has to offer.

They established which plants were edible, which were poisonous, and which had medicinal properties. They developed hunting methods and techniques, as well as a keen eye for tracking.

Through their mastery of the Kalahari, they became efficient at the tasks necessary to survive and thrive. Studies have found that San hunter-gatherers worked for only 12 to 19 hours per week; less than half of the average workweek in most modern societies.

They lived in small, nomadic groups of around 25 individuals, finding shelter under rocky outcrops and in caves, or erecting nonpermanent dwellings. And as they roamed, hunted, and gathered, they enjoyed a rich culture of gift-giving, dancing, music, and art.

You can still see their stunning, ancient rock art across Southern Africa, particularly in the Tsodilo Hills. Their eggshell jewelry is also well known, and they were musically inclined, with clapping and singing forming part of their dance rituals.

The term Khoisan describes a group of language families and isolated languages that make use of characteristic ‘click consonants’. These languages are mostly endemic to Southern Africa but are not considered a language family. Instead, the only relation is their audible similarities and geographic crossover.

It is a traditional San conviction that no individuals should have elevated social status. They believe that inequality can only lead to problems (which modern society can attest to). As an antidote, they have adopted various practices.

For starters, men and women see one another as equals in their culture. And while each gender has its determined role, men and women both contribute to the tribe’s food and general wellbeing.

Then there’s the peculiar practice of insulting a hunter’s kill. The San believe that if a man has many successful hunts, he may start to think that he is of great importance. So they undermine hunters’ kills to avoid inflated senses of self-worth. And the hunters cheerfully accept the practice. 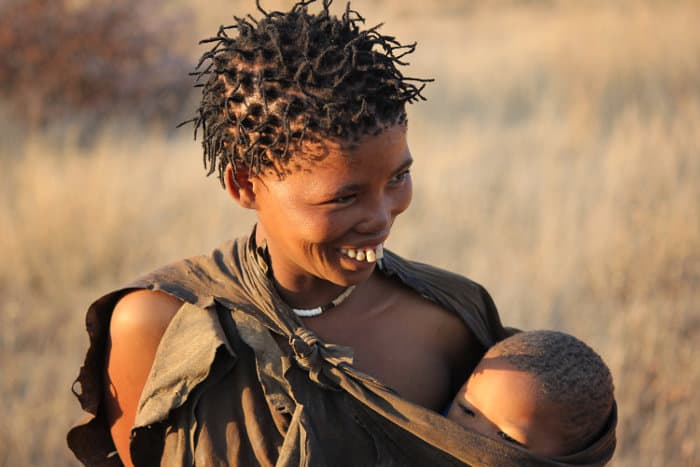 Often decorating their extremities and hair with ostrich eggshell trinkets, women are significant in San culture.

They are the gatherers; foraging for food in the sparse Kalahari landscapes. The food that they gather contributes more than two-thirds of a tribe’s calories. And so their opinions on nourishment, movements, and social decisions have long been well-regarded and respected.

In San culture, men are traditionally the hunters. While they contribute fewer of the tribe’s calories, their contribution is still valuable and revered by the group.

When hunting, they would carry shoulder-slung leather pouches, containing some of their personal effects and items they might need during the hunt. This includes medicine, poison, and arrows.

Hunting Habits of the San Bushmen 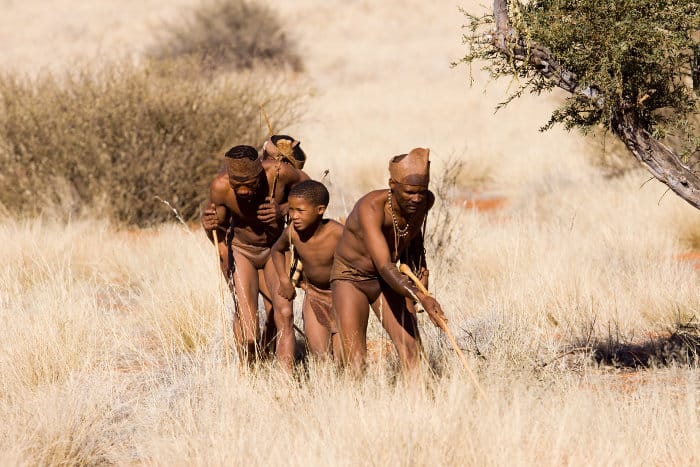 The Kalahari bushmen are incredibly adept hunters. Over hundreds of generations, they have shaped and refined their techniques and talents, from the first sign of a trail right through to making the kill.

Their primary weapons are small, unassuming bows that look better suited to rabbits than the megafauna of the Kalahari. Yet the San have used these dainty bows to take down behemoths like gemsbok, eland, and giraffes for millennia.

Their secret is their use of poison arrows, which they’ve used for at least 25,000 years. They would harness toxins from various plants and insects to make these lethal weapons.

The poison is usually slow-acting and can take anywhere from a couple of hours to a few days to bring the prey down. So the San must track and follow the wounded animal on sometimes multi-day journeys through the dry savannah landscape.

Fortunately, they are some of the most skilled trackers in the world, which helps them follow their injured prey over great distances. Just by observing an animal’s track, they can determine its sex, age, weight, and health, as well as how long ago it passed through the area.

Eventually, the poison has fatal effects, and the San can reap their reward. They cut out and discard the meat around the arrow wound to avoid eating the toxins, and then distribute the spoils throughout the tribe.

They would also make use of the entire animal, creating blankets from hides and extracting marrow from bones.

The San peoples do not all share one set of religious beliefs. They historically have comprised a number of groups, spread out over hundreds of thousands of square kilometers. So, naturally, there’s some variation in their religious convictions.

However, there are traces of beliefs across the various groups that appear to share common ground. These archaic fragments of stories and ideas will have trickled down from ancient ancestors, seeking to understand their world.

The San have also long been in contact with Christianity, so it’s likely that this has affected their modern religious beliefs.

Common to most San Bushmen religion is a basic outline of creation, whereby all animals and humans were originally conflated. Although there are many myths and tales of creation among the San.

The beliefs also converge on there being a creator, who is the Greater of two Gods. He has various names at different times and among different groups, but the San generally consider him to be a force for good.

Then there is the Lesser God, who also has many names, and who they see as responsible for life’s misfortune.

Alongside their Gods, the San believe in the spirits of the dead and that elands possess supernatural energy in their blood and body. Elands are the most common animal in San rock art, which in itself was a spiritual practice. And the artists painted many of them in the blood of the animal itself.

San Tribes of the Modern World 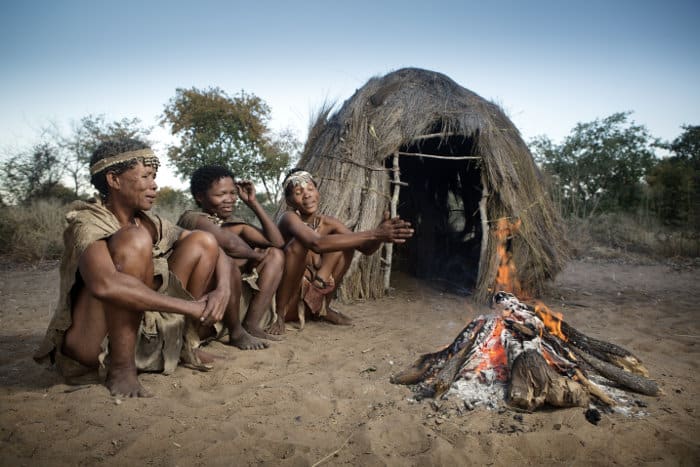 Sadly, European colonization brutally disrupted the enduring and captivating lifestyle of the San. Through genocide, land takeovers, war, and labor, the colonists drove the San people from their traditional ways.

By the mid-20th-century, Europeans had pushed the San out of their homelands and halted their hunting practices.

All of this means that the idealistic image of modern-day San people hunting and gathering in peace is little more than a fantasy. The majority of San people alive today live in abject poverty and experience low standards of living. Indeed, they have become Southern Africa’s poorest people.

Around 100,000 San Bushmen are alive currently, most of whom are strangers to the traditional hunter-gatherer lifestyle. There are very few places in the world that the San can still hunt and gather, the most notable of which is the Nyae Nyae Conservancy in Namibia.

However, the small swathes of land available make this lifestyle unsustainable. So even the San people of Nyae Nyae must rely on government support to survive.

The San Bushmen of Africa: A Lost Wonder

The thought of true gender equality, 15-hour workweeks, ample food, supportive communities, and stunning surroundings seems like the stuff of a utopian sci-fi novel. Yet for the San, it was a reality.

For hundreds of centuries, the Bushmen of the Kalahari have not only survived; they’ve thrived. They found their utopia among the shrubs and creatures of the Kalahari, now left in the dust by the machinery of human progress.

From the vantage point of modern society, and with hindsight in our favor, it would be wise to look to the story of the San for guidance. We might just learn something about our place in this world. 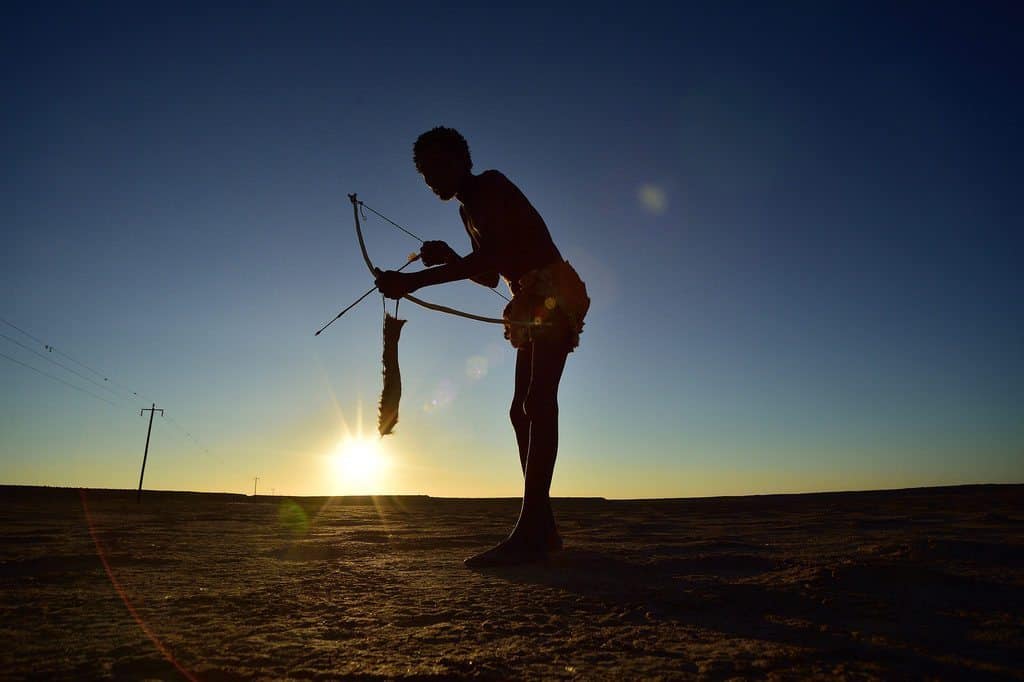 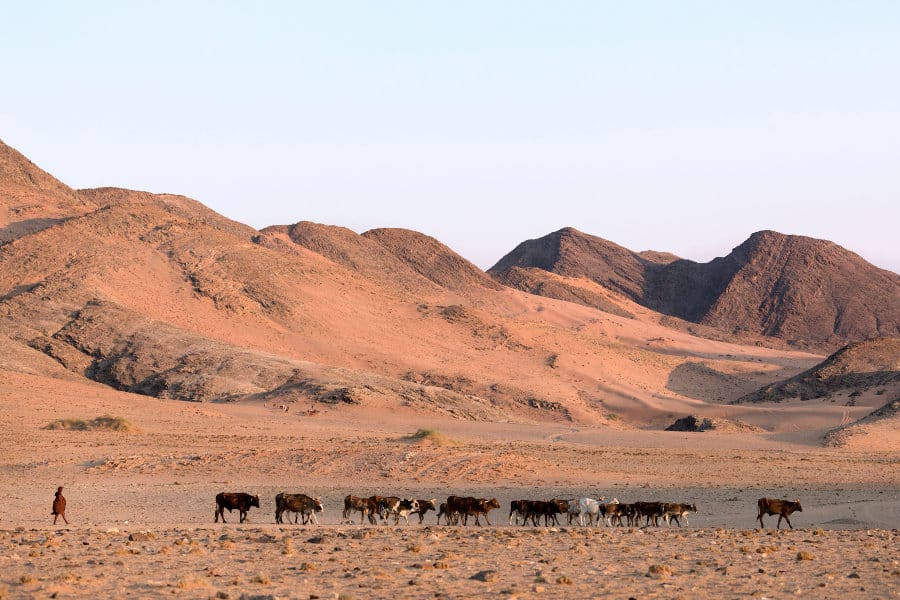 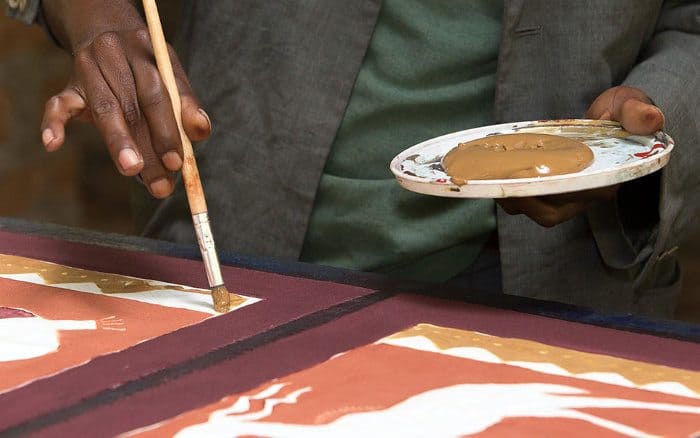