These incredible spiral-horned animals reside in the arid and semi-arid areas of northeastern Africa. The lesser kudu, Tragelaphus imberbis, has an estimated population of 118 000 and is on a downward trend.

The males prefer being solitary while the females are gregarious and remain in herds for most of their lives. The camouflage appearance and evasive behavior make sighting a lesser kudu an exciting occasion on safari.

Ticking off a list of all the African animals? Read everything you need to know about the lesser kudu below.

What is a Kudu?

A kudu is an antelope with stripes from Africa. The greater and lesser kudu are part of the genus Tragelaphus and belong to the family Bovidae. The lesser kudu is one of 8 species of spiral-horned antelope in Africa.

The common name, kudu, comes from Khoikhoi; a language indigenous to Southern Africa that is spoken by the Khoisan people. The scientific name comes from the Greek words tragos meaning goat, elaphos meaning deer, and imberbis meaning unbearded.

It is a brown animal with white stripes. Lesser kudus have one long white stripe running the length of their back, with 11-14 white stripes branching off down their sides. They have a bushy tail 10-15 inches (25-40 cm) long which is white underneath and has a black tip at the end.

The species has distinct sexual dimorphism, with differences in size, color, and horns. Males have a black crest of hair on the neck, while the crest is not as prominent on females. A black stripe runs from each eye to the nose and a white one from each eye to the center of the dark face.

White hair appears around the lips and on two spots on the neck. The underparts are completely white, with two white spots also appearing on each side of the lower jaw. 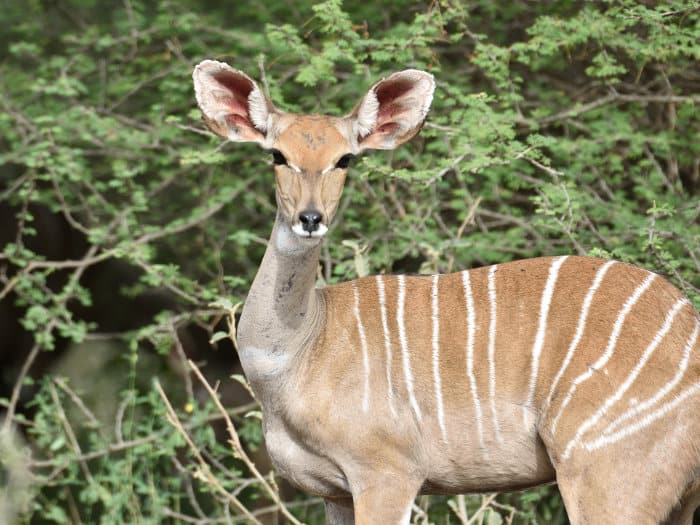 Female lesser kudus reach 90-100 cm in height measured to the shoulders. They weigh between 56 and 70 kg. Females have a reddish-brown coat and do not have horns. 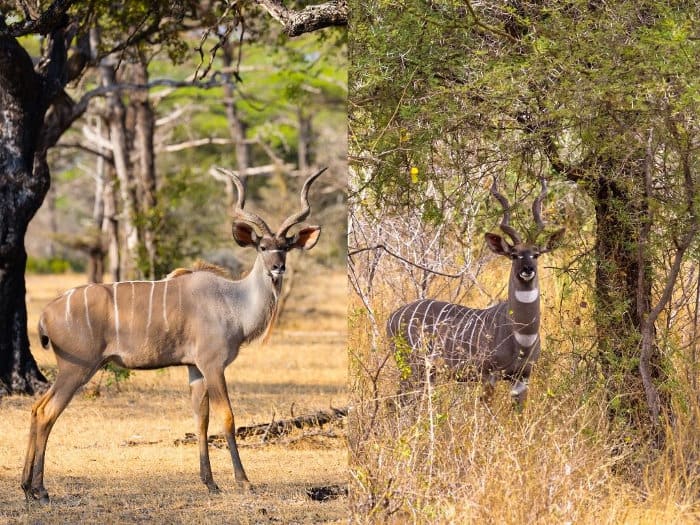 One kudu species is in no way less important than the other. The name lesser denotes the species’ smaller size.

As mentioned above, the lesser kudu has 11-14 vertical white stripes which appear along the animal’s flank. The greater kudu has fewer stripes and more space between the markings.

Visitors on safari and locals admire these incredible animals with curly horns. The lesser kudu’s horns grow to between 50-70 cm long and have two to two and a half twists. The greater kudu’s horns can reach an incredible 1.4 m in length.

What Do Kudus Eat?

A kudu’s diet consists of shoots, twigs, herbs and foliage from bushes and trees. Lesser kudus browse primarily at dusk and dawn. They compete with impala for evergreen species and prefer eating from a standing position.

The lesser kudu is able to survive in arid environments and can absorb moisture from eating succulent plants, such as the Euphorbia species. Small fruit from the Acacia tortilis and Commiphora genus make up a part of the lesser kudu’s diet in the dry season.

Moving through dense vegetation, the lesser kudu will spend 35% of their day foraging for food.

The total population of lesser kudu is around 118 000 and appear on the IUCN Red List as near threatened. The species is on a downward trend and faces threats from decreasing habitat, hunting, and disturbances in its natural environment due to humans.

The rinderpest virus, distributed by cattle, impacted the number of lesser kudu in eastern Africa during the mid-1990s. If not managed by farmers the virus is likely to continue to be a threat to the lesser kudu species.

Thankfully the species shyness and preference for thick cover have enabled it to survive in areas affected by poaching and uncontrolled hunting. About one-third of the total population occurs in protected areas such as national parks. 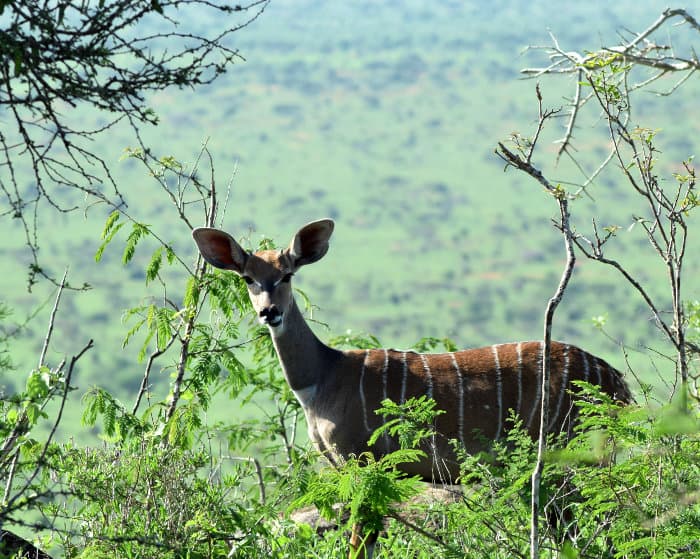 The lesser kudu lives in arid and semi-arid areas of northeastern Africa. You can spot them during safaris in Ethiopia, Somalia, Kenya, Sudan, Uganda, and Tanzania.

They prefer shrublands and woodlands, populated by Acacia and Commiphora thornbush trees, which afford them more protection than open spaces and grasslands. The species lives at altitudes as high as 5700 feet (1740 m) above sea level near Mount Kilimanjaro.

A male kudu leaves its herd and mother when it reaches sexual maturity from 1 and a half years of age. Adult males are solitary and typically join a female herd temporarily to mate from 4 to 5 years of age.

The lesser kudu does not have a fixed breeding season and births occur throughout the year. Pregnancy lasts 7 to 8 months and usually results in the birth of a single calf. Females separate from the herd to give birth and return after a month.

Calves remain with their mothers and are rarely apart in the first months of their life. The newborns face challenging survival odds. 50% of offspring succumb to disease or predation within the first six months of life.

Lifespan and Expectancy of a Lesser Kudu 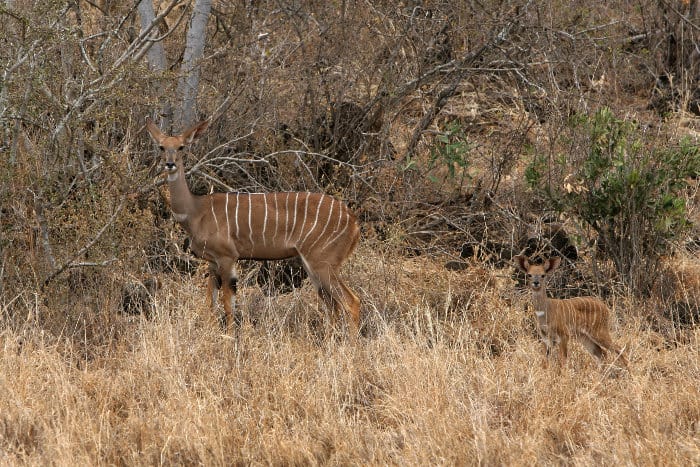 Living in the wild a lesser kudu has a life expectancy of 7-8 years with outliers living to 10 years old. As mentioned above the offspring face a challenging environment in the first six months of life.

The lifespan of a lesser kudu living under human care can reach an impressive 15 years of age due to reduced predation and a reliable source of nutrition.

Predators of the Lesser Kudu

Lesser kudus have a variety of predators and rely on their herd and hearing to alert them to danger. The known predators are lions, leopards, hyenas, wild dogs and even pythons.

An adult kudu relies on its camouflage appearance to prevent detection and incredible jumping to avoid capture from predators. When standing still the stripes on the kudu’s body break the outline of the animal, making it difficult to spot.

When evading a predator it can run at a top speed of 70 km/h and is one of the fastest antelope species.

How Do Lesser Kudus Behave? 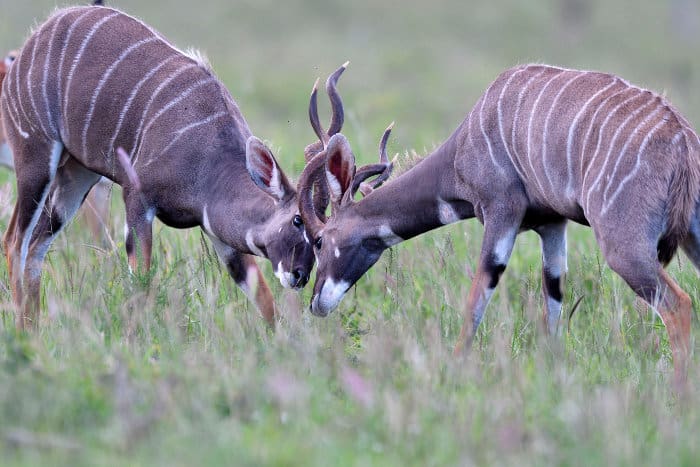 The clashing of horns signals the beginning of a fight which can result in serious injury. A fight usually ends with the defeated male retreating from the area.

A kudu, when approached by a predator, will give a short sharp bark and evade the attacker with its tail in the air as a warning sign to the rest of the herd. While running it can make multiple leaps, reaching upwards of 2 m in the air.

If captured by a predator, it releases a loud bleat and will continue to struggle for freedom.

Let’s Go on Safari to See a Lesser Kudu! 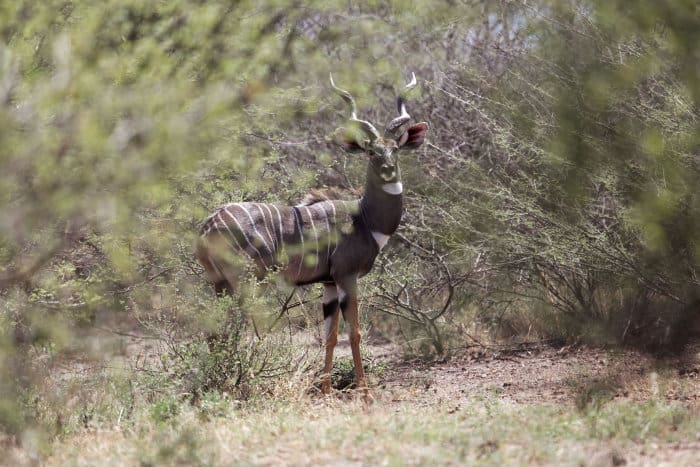 Now that you are well informed about the lesser kudu and know where to find these spiral-horned animals, it is time to see them in person. Keep an eye out for deals on safaris in Kenya, Uganda, and Tanzania.

The wild animals, alongside great guiding and service, are the highlight of a safari experience. Already witnessed these animals in the wild? Share stories of your lesser kudu sightings in the comments below. 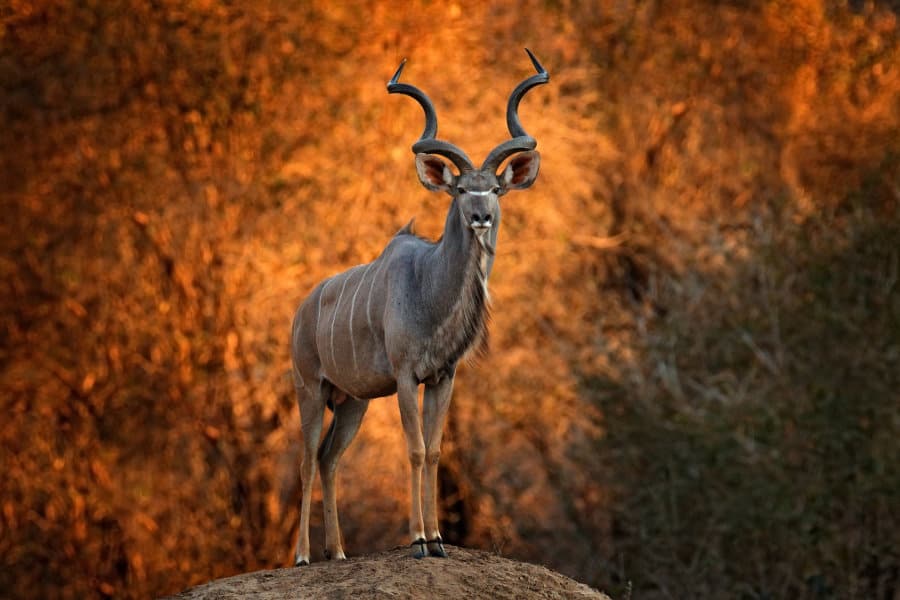 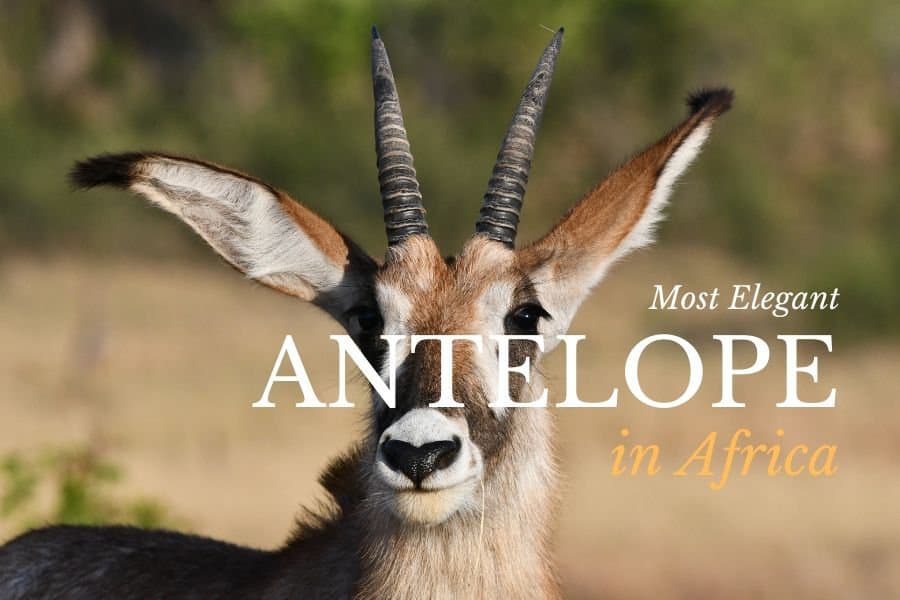