What do you think when you hear the word ‘kangaroo’?

You’re likely not thinking of Africa.

Africa is home to a wealth of wildlife. Its diverse habitats include tropical rainforests, open grasslands, and deserts.

Are there any kangaroos in Africa, though?

Kangaroos are iconic Aussie animals. Probably the most famous of many marsupials on the continent.

But kangaroos’ ancestors weren’t from Australia. And other continents have marsupials.

Would it be a stretch to see kangaroos sharing the savanna with springbok?

Okay, so there aren’t any kangaroos in Africa. There’s something quite similar, however.

Are Kangaroos Native to Africa? 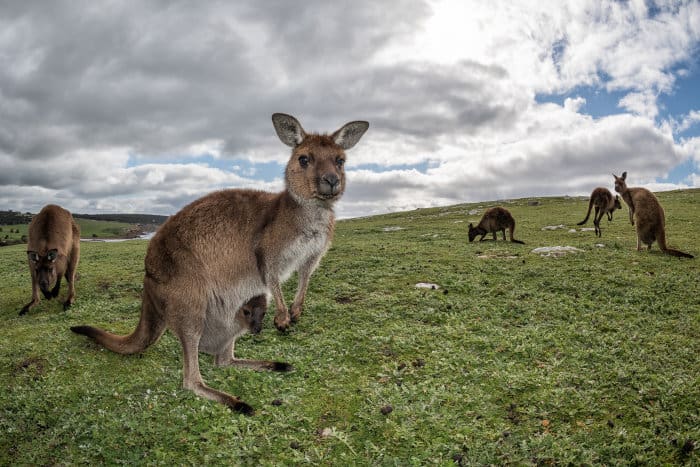 No. Kangaroos aren’t native to Africa. Kangaroos and wallabies are a type of marsupial called a macropod. Macropods only exist in Australia, New Guinea, and a few nearby islands.

Marsupials originated in North America. The earliest marsupial fossil was found in modern-day Montana and is 65 million years old. Many marsupials spread down into South America, and several survive to this day.

Kangaroos’ ancestors are some of those South American marsupials. Scientists believe they travelled to Australia via Antarctica before these continents broke apart.

Kangaroos evolved in modern-day Australia. With no non-marsupial mammals, they evolved to occupy various niches.

In Africa, some of the continent’s most iconic mammals were emerging. Majestic elephants. Long-necked giraffes. Fearsome big cats. But Africa didn’t ‘pouch’ any marsupials.

Your safari guide probably won’t be telling you many kangaroo facts. Here are some to be going on with. 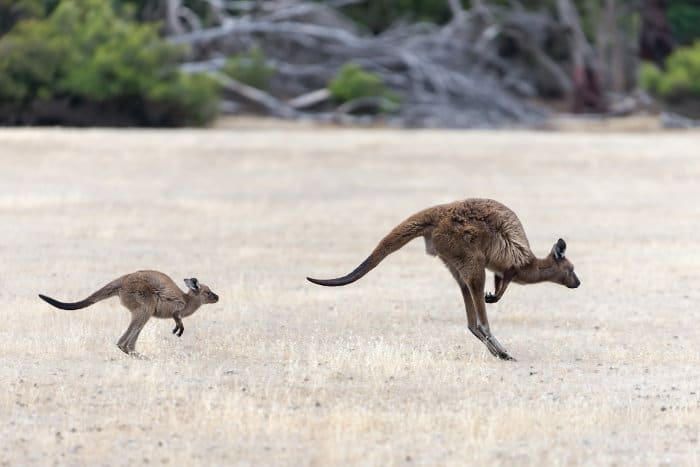 Red kangaroos can hop along at over 35 mph (56 km/h), and cover 25 feet in a single leap. Not bad, but plenty of African animals would leave them in their dust!

I’m sure you know that marsupial mothers carry their young in a pouch. These young are all called joeys. (It must get confusing.)

New-born joeys are tiny compared to most mammal young. A baby kangaroo is just 0.2-0.9 inches long when it is born. The joey then climbs from the birth canal to the pouch. 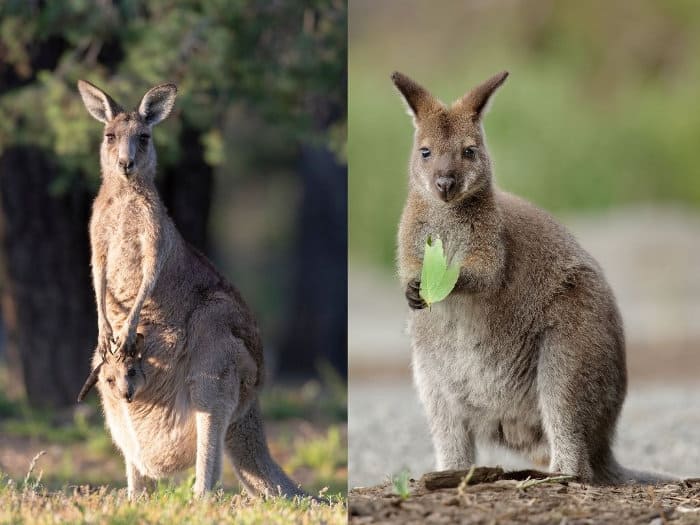 The only real difference between a kangaroo and a wallaby is size. The largest species are called kangaroos, and smaller ones are called wallabies.

Confusingly, there are some species called wallaroos. Wallaroos are in-between kangaroos and wallabies in terms of size.

The smallest macropods go by different names like quokkas and pademelons, but they’re still members of the same family. There are even some tree-kangaroos in northern Queensland and New Guinea.

But none of these wallabies, wallaroos, or kangaroos live in Africa. Sorry.

Can Kangaroos Survive in Africa?

Can kangaroos survive in Africa? Importing species is usually a bad idea for ecosystems. I don’t think there are any plans to move the roos to another continent.

A better question might be: could kangaroos survive in Africa?

In terms of habitat and food, many kangaroo species might enjoy parts of Africa. They would find plenty of vegetation to munch on. That’s if Africa’s herbivores hadn’t eaten it all first!

Some species can even cope with tough conditions like drought. Red kangaroos, for example, occupy some of Australia’s deserts.

Maybe some of them could survive in the Kalahari, with its semi-arid climate. Even the Namib desert supports a few large grazers like oryxes.

The main issues would be competition and predators. Kangaroos have evolved without much competition for food. They have their own niche in Australia. Africa, on the other hand, is so rich in life. There’s always a fight for resources.

Kangaroos also lack large predators in Australia. A lion is a lot more formidable than a dingo!

They do have powerful legs and long claws. Even so, the largest kangaroos would still be no match for Africa’s top carnivores.

Better not try this experiment, then. The only ones in favour would be the predators!

The Closest Thing to Kangaroos in Africa – The Springhare

So, there aren’t any kangaroos in Africa.

Why do people wonder, then?

It could be because of the springhare. This African animal closely resembles the Aussie critter.

With its long hind legs and hopping gait, the springhare looks a lot like a small kangaroo. Despite appearances, it’s not related. And despite its name, it’s not in the rabbit family.

This mysterious mammal is a rodent, but it has confused scientists trying to classify it.

Springhares have been grouped with jerboas, then porcupines, then scaly-tailed squirrels. Now, they’ve been allotted their own family.

Springhares use their powerful legs to hop around and can leap impressive distances.

They’re mostly nocturnal. At night, they forage for vegetation and the occasional insect. During the day, they sleep in burrows they’ve dug themselves.

Like some marsupials, the springhare has a fluorescent coat under UV light.

No Kangaroos in Africa, But Plenty of Native Wildlife 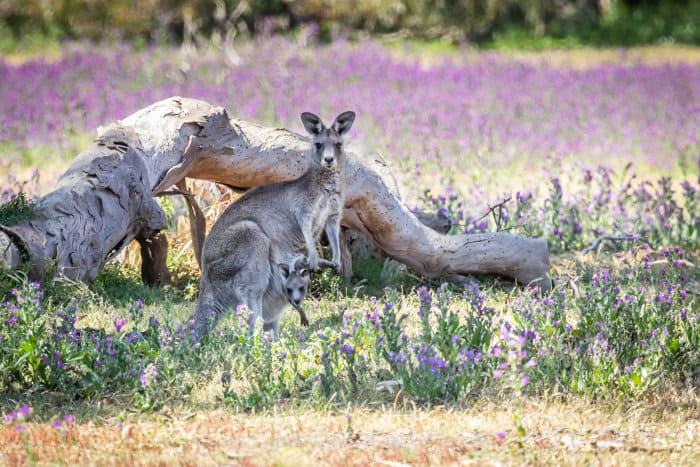 Are there kangaroos in Africa?

Not in the wild, at least.

You’ll have to hop on a plane down under if you ever want to see them. And that’s probably for the best.

And many African animals are already at risk. Conservationists have a hard enough job protecting Africa’s native wildlife.

Africa may not have kangaroos, but it’s packed with amazing animals. Head to Eastern or Southern Africa, and maybe you’ll even spot the kangaroo’s look-alike, the springhare.

If not, you can always have plenty of amazing encounters with African wildlife on safari.