Confined to the marshlands of Africa, the sitatunga wanders gracefully through the dense, swampy vegetation.

It’s rather unique that these ‘African deer‘ choose to spend their time in mangrove swamps, as opposed to the vast plains of the grasslands. Seldom leaving the comfort of their marshlands and reed beds, these gentle beings find happiness in the stillness of the marsh.

The trick to seeing the sitatunga out in the wild? Keeping as quiet as possible. Move too quickly and they might just dart underwater, where you’ll only catch a glimpse of their nostrils peeping above the surface.

In this article, you’ll find out all there is to know about these unfamiliar deer, and how you can spot them in the wild.

What Exactly is a Sitatunga?

Besides the common name, sitatunga, this swamp-dwelling antelope is also known as a marshbuck.

Closely related to bushbuck, kudu, and nyala, there are three subspecies of sitatunga, spread across Africa. These subspecies are:

How can you recognize a sitatunga?

A shaggy coat made up of coarse hair is one of the most defining features of the sitatunga. Depending on the sex and geography, the coats will vary. They tend to vary between deep browns, chestnuts, and rich reds.

Adults have longer coats made up of white markings with white stripes or dots across their ears, face, body, legs, and above their hooves.

And you’ll definitely know whether you’ve spotted a male or female Sitatunga. The males show off their impressive twisting horns that, once fully developed, will be ivory-tipped.

With its hindlegs growing longer than its forelegs, the sitatunga has a slightly hunched appearance. Nonetheless, with widely spread and elongated hooves, they move ever so swiftly.

Where to See This African Deer-Like Animal

Consider yourself lucky if you get a chance to see a sitatunga in the wild. Even when you’re fortunate to be in the presence of many sitatungas, they’ll still be rather tricky to spot. Purely because of how picky they are when it comes to their habitats.

The sitatunga is one of the shyer African buck species and they’re happiest when hidden in the thickets. Their natural habitat includes tall grasses in the savannas, swamps, bodies of water, forests, and forest clearings.

They reside most commonly in central and eastern parts of southern Africa. The areas range from Cameroon and the Central African Republic, as well as the northern parts of Botswana.

Some subspecies also call the Zambezi and Chobe River their homes. These areas are awesome for African safari adventures, increasing your chances of spotting the coy sitatungas.

When you’re most likely to see them

The early bird catches the worm when it comes to witnessing these marshbucks. After the early hours of dawn, the sitatunga is most active. They’ll spend their time grazing and refueling.

As the African sun begins to heat up, they head to rest in flat areas and reedbeds. They build up these areas themselves by trampling on the dense vegetation. You’ll know you’re in the presence of a sitatunga when you start to notice the fold of thicket and paths in the reeds.

They’ll mostly remain sedentary in the hotter parts of the day and chill out in the shade of the tall reeds.

Come nighttime, the sitatunga will leave the waters and head to a hiding spot that they feel most protected in. But they’ll return to the swamp before daybreak.

Below are some interesting facts about these creatures social behaviors and herbivorous diets.

Although they tend to be solitary, sitatungas still initiate friendly greetings. First, they’ll touch their noses together, and then adorable nibbling and licking follow. Get ready to bring out the binoculars to spot these beautiful interactions among the tall grasses.

They’ll most likely remain together in loose groups for a short period of time, with minimal interaction. Some even say they can remain in groups of up to nine, each involved in their own business.

If you were to spot a distressed sitatunga, their alertness may be contagious. With their heads held high, and one leg lifted above the ground, they’ll stand motionless in hopes of not drawing unwanted attention.

And when danger is on the rise, sitatungas are sure to let their fellow species know. A series of coughs or barks travel across the swamps, in hopes of others joining in the calls.

As well as warning barks, male sitatungas release a low bellow in hopes of finding a mate. While they’ll release a low pitched squeak while feeding. When a mother is with her young, she will communicate with soft bleats.

Given that the sitatungas spend the majority of their time in the water, their diets consist of marsh grub. A large portion of their meals is fresh papyrus and reed shots.

By being picky with their habitat, it’s no surprise they’re quite choosy with their diet as well. Some of their favorites include bullrushes, aquatic grasses, and sedges.

Having long, strong hind legs come in handy for food foraging. Sometimes, you may even spot a sitatunga standing on their hind legs for an extra treat in a tree. For the fortunate males, they even have the extra factor of their horns for reaching those hard to get places.

As a result of being creatures of the marsh, their diets change with the seasons. When the swamps flood, sitatungas choose to feast on a variety of herbs, and quite extraordinarily, even sweet potatoes. 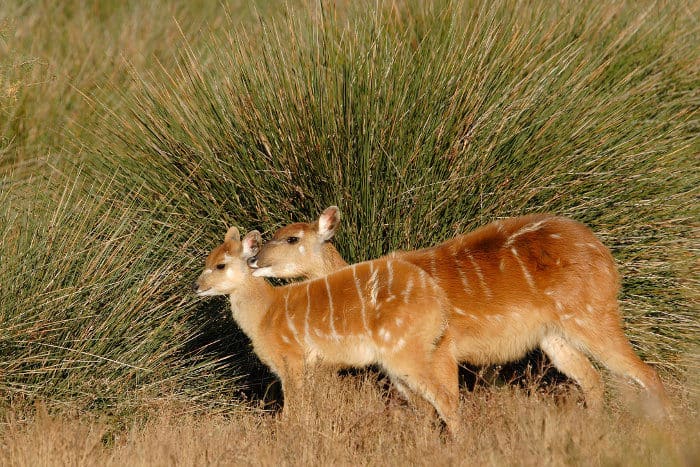 One of the biggest threats wildlife is facing is habitat loss. For such a particular species like the sitatunga, marshes and swamps make up their only habitats. Without these kinds of environments, sitatungas need to find homes elsewhere.

Along with habitat destruction, their food source is also a concern. The wetlands have the potential to affect all other forms of vegetation. Underground plant systems all interlink, and when one part dies, it often affects the surrounding areas.

Unfortunately, the sitatunga is also under threat due to trophy hunting. In Senegal, intensive hunting for meat, along with habitat loss, has left the buck in low numbers.

On a more positive note, 40% of the population live in protected areas. The Chobe swamps, Okavango Delta, and Lobéké National Park are just a few of the protected reserves where you find the animals.

Besides conservation and habitat destruction, another big threat is predation.

They’ll often be on the lookout for lions, wild dogs, leopards, and more commonly, Nile crocodiles. One of their most useful escape tactics is being a good swimmer. Nonetheless, to be extra cautious they’ll keep away from the deep waters in hopes of avoiding the ravenous crocodiles.

When push comes to shove, they’re not afraid to fully submerge themselves below water for an abrupt disguise. Large mammals will often give up on the fight just to avoid the water.

With a strong gait and splayed banana-shaped hooves for sinking into the wetlands, they’re well-equipped to outrun their mammalian predators. The soft grounds aren’t ideal for running on if you’re not well-prepared, like many hyenas and big cats.

They’re not too lucky on dry land though. Their wet-adapted hooves prove to be clumsy and unstable on hard grounds.

There isn’t a set period when it comes to sitatunga breeding periods and often takes place throughout the year. Yet the drier months produce the most calves.

After a gestation period of seven and a half months, the female will give birth to only one calf. Once the calf is born, the female will do everything in her power to protect and keep her young hidden.

The mother and calf will spend most of their time nestled in the thick vegetation and hidden in the swampy waters. Here the calf will learn about life in the marshlands and become an expert navigator.

After several months, it’ll be time to say goodbye to their mothers. At one year, the female has reached sexual maturity and one and a half years for the males.

Lifespan of the sitatunga antelope

The average lifespan of sitatunga ranges from 22 to 23 years in captivity. However, there’s no saying how long they will live in the wild. Predation, threat to habitat, and general uncertainty in the wild all affect their lifespan.

Despite sitatungas lurking in the African swamp, they still manage to captivate their audience from afar. With their wonderful lifestyles and gorgeous coats, they’re a pleasant surprise to see peeping from beneath the reeds.

While they’re not that easy to come across on a safari, with the right guide, in the right place and at the right time, you’ll be in for a treat. Arrange a personalized safari through Africa in hopes of seeing these beauties in their awesome habitats!