Several captivating animals call the expansive Serengeti-Masai Mara ecosystem their home. From the water-based hippos and crocodiles to the land-loving giraffes and plentiful ungulates, the biodiversity is magnificent.

The Serengeti is also home to the small, white-bellied Thomson’s gazelle. Informally known as a “Tommie”, the deer-like animal is named after researcher Joseph Thomson. Thomson’s gazelle’s scientific name is Eudorcas thomsonii.

These adorable animals move in large herds, with their population numbers exceeding 200,000 in Africa . Yet it’s always a treat to spot them. Here are some interesting facts and details about the most common type of gazelle in East Africa to help you better appreciate them. 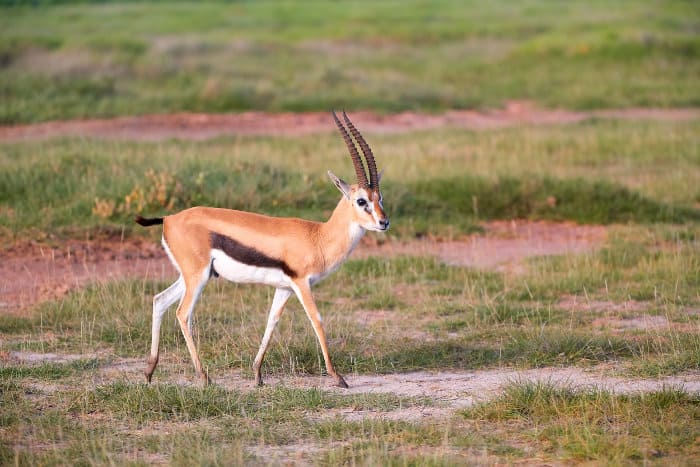 If you spot a relatively small gazelle with white rings around its eyes and black stripes running from a corner of the eye to the nose – then you’ve probably seen a Thomson’s gazelle.

The sandy brown coat features a distinctive black band across the flank, with a light band evident above. Their black tails stem from the top of a white patch on their rump. The white fur continues to hug the underside of their bellies. 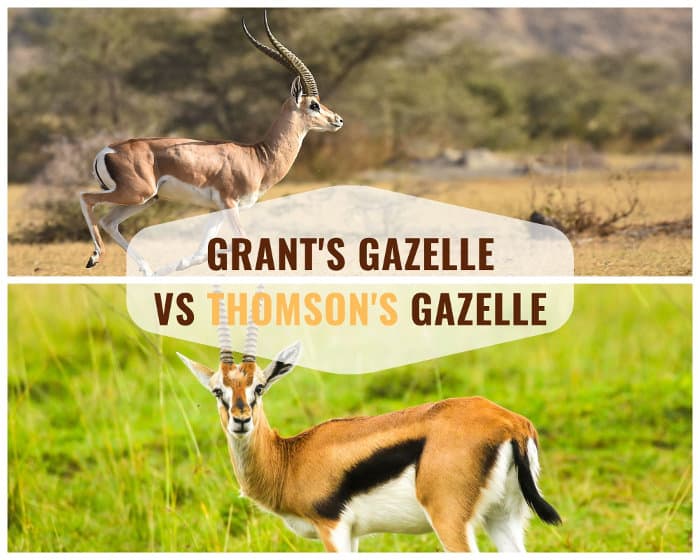 Thomson’s gazelle is often confused with the Grant’s gazelle. Both gazelles have a white belly and black stripe. However, there are a few key differences to note between the two.

The Thomson’s gazelle is largely distinctive by the thick, dark stripe across its side. While some Grant gazelles also have these stripes, they are not as distinguishable.

The facial markings are a better guide in determining the difference between the two. Both of the gazelles have a thick, black stripe that extends along the side of their face, starting at the nose. Thomson’s gazelle ends at the eye, while the Grant’s gazelle continues a little further.

The Grant’s gazelle also has a noticeable white band on top of the black stripe which is slightly more prominent than on the Thomson’s.

This detail is easier to spot when the animals are in their herds. The Grant’s gazelle is noticeably larger and more graceful than the smaller, stockier Thomson’s. Although, the young are more difficult to differentiate.

Another prominent marking on both gazelles is the white patch of fur on their backside. The biggest difference is that Grant’s gazelle’s patch is larger and covers the region above their tail. The Thomson’s white patch stops at the root of their tail.

When in doubt, look at the butt! 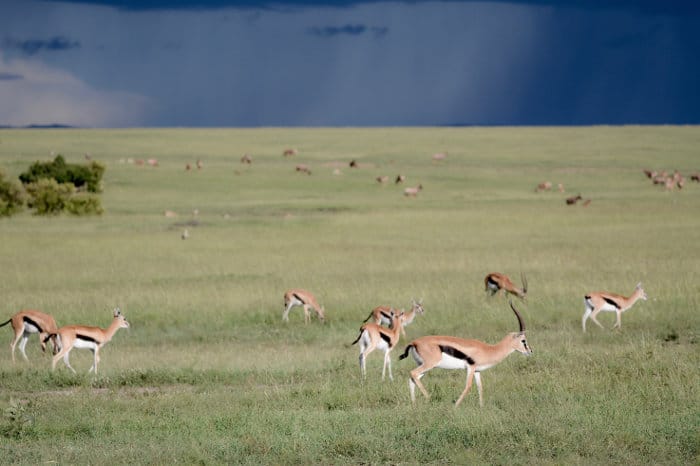 By now, you may have fallen in love with the adorable, dynamic gazelles and you want to see them live in action. These nimble animals thrive in wide-open spaces and plains. This suits their lifestyle and diet.

The Serengeti region of Tanzania is the most populous area of Thomson’s gazelle. While they prefer short, dry grasslands, they are also known to migrate to taller grasslands and dense woodlands.

Thomson’s gazelles are herbivorous and their favorite food is short grass. As mixed feeders, they adapt to the different seasons.

During the wet season, they munch on fresh grasses. In the dry season, they snack on the dehydrated grasses when possible, although they also browse foliage from bushes, forbs and clovers.

You’ll notice that Thomson’s gazelles have a concentrated population at the beginning of the rains when the grass is plentiful. They follow larger herbivores who munch on the grass, cutting the tall grasses down. When the season becomes drier, the herds tend to spread out in order to find more food. 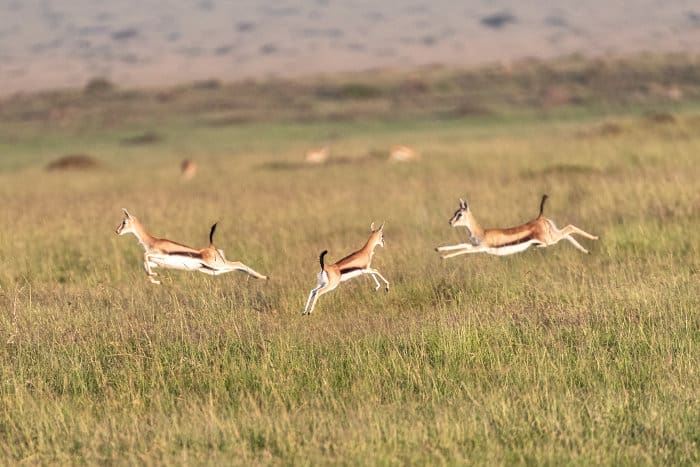 Living in the open plains, Thomson’s gazelles are quick on their feet. Although small in stature, they can reach an impressive speed of 70 kilometers per hour, with some sources suggesting a faster 90 kilometers per hour. This allows the speedy creatures to escape predators and live another day.

When the Thomson’s gazelle kicks into survival mode, they can accelerate from 0 to 90 kilometers an hour in 18 seconds.

This astounding pace, which is half that of a cheetah’s peak pace, makes the Thomson’s gazelle one of fastest land animals in the world. Unlike the cheetah, the gazelle can hold its speed for a lot longer.

Are you wondering what eats gazelles? It may surprise you to know that, even though they’re so quick on their feet, the list of predators is fairly extensive.

In the wild, they need to keep their eyes open for the typical African predators such as cheetahs, lions, leopards and hyenas. They can also become victims of a hungry crocodile or African rock python. To escape these predators, the gazelles move in a zigzag pattern to throw them off.

Sadly, Thomson’s gazelles have another predator group that have contributed to their 65% population decline between 1970 and 2000 – humans.

Not only is their habitat decreasing as human populations grow, Thomson’s gazelles are also victims of hunting. They are often found on farmlands where they feed off of the short grass. Unfortunately, they make themselves an easy hunting target in the process. 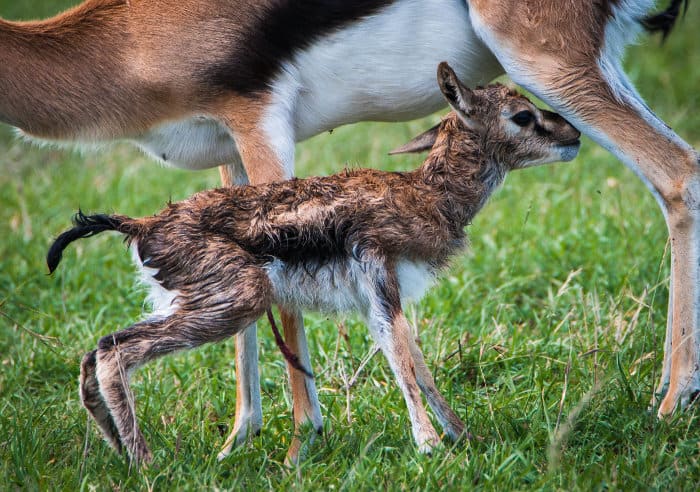 Considering the number of predators that hunt the Thomson’s Gazelle, their lifespan is quite impressive. Living between 10-12 years in the wild, the Thomson’s population remains quite strong.

Once the gazelles reach sexual maturity, between 19-21 months, they are able to conceive. Their gestation period is only six months, which is shorter than other ungulates such as the common eland.

The females will give birth to a single calf at the end of gestation period and the baby will live the first few weeks in a special, secluded space.

If the food supplies are abundant, then they may conceive again within a few weeks of giving birth. Another factor that adds to their consistent population is that mating and birth can take place throughout the year.

The East African gazelles live in herds that typically include 100 individuals, however, they can reach up to several hundred individuals during the rainy season.

The rainy season is also the time that the male gazelles graze extensively and expand their breeding territories. The female gazelles form migratory groups and enter these various territories.

The males mark their territory with a dark secretion that they emit from their preorbital glands.

Males typically respect these territorial lines and don’t move across boundaries. They will even stop chasing a female if she moves into neighboring territory. 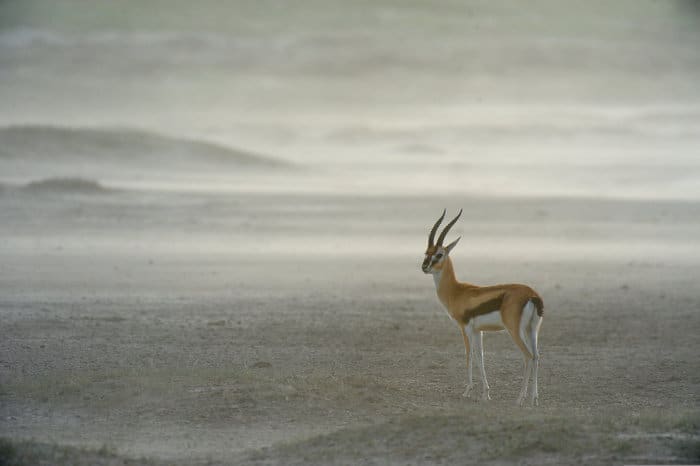 The Thomson’s gazelle may be the smallest of their species, though their size certainly doesn’t affect their complexity. Here are a few fascinating facts about the charming gazelles.

The Future of Thomson’s Gazelle

The African Wildlife Foundation works tirelessly to conserve this magnificent species. These endeavors include setting aside space for wildlife to providing agricultural training.

Want to witness these magnificent creatures in their natural habitat? Then you can book a tailor-made safari in the Serengeti region. This experience will bring you face-to-face with Thomson’s gazelle along with plenty of other local wildlife.