The relationship between gazelles and antelopes is one of those slightly complicated deals. But we’re going to help make it less complicated.

Antelopes and gazelles belong to the bovid family – the same as cows and other cattle, sheep, and so on. They all have cloven hooves and horns to some degree.

Every bovid that is not a buffalo, bison and other domestic cattle like goat, sheep and cow, is an antelope. Even gazelles are antelopes, however not all antelopes are gazelles.

Are you still following?

So what is a gazelle, then?

Gazelles are a subclass of antelope, and here’s where we’ll look at how to tell the difference, what similarities they share, and what makes them so fascinating.

General Notes on the Antelope and Gazelle Species 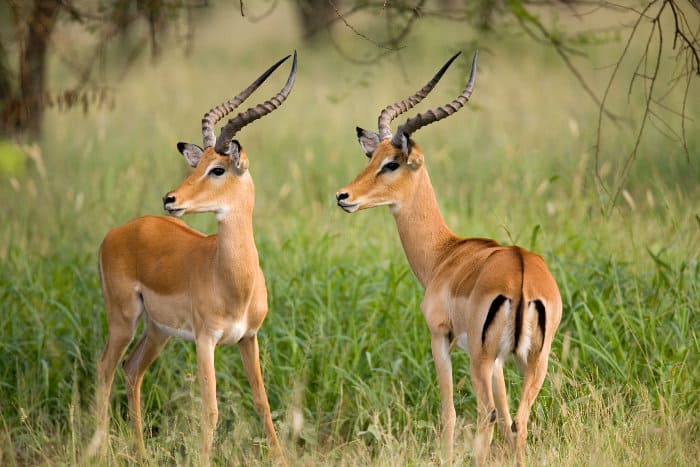 For context, here’s a basic picture of the antelope situation on planet Earth:

Question: Is a gazelle a deer?

No. Antelope are not deer primarily because of their “horns”. Deer have antlers that shed every year, while antelope grow permanent horns.

The Main Difference Between Antelope and Gazelle

Let’s start with a few obvious ways to determine whether the bovid you’re looking at is an antelope, or more specifically, a gazelle.

The main visual indicator is antelope size comparison, with another possible way being the horns. Basically, a gazelle is smaller than most of the other antelope species.

This is a less-reliable way of telling them apart, though, unless you know your antelope well. 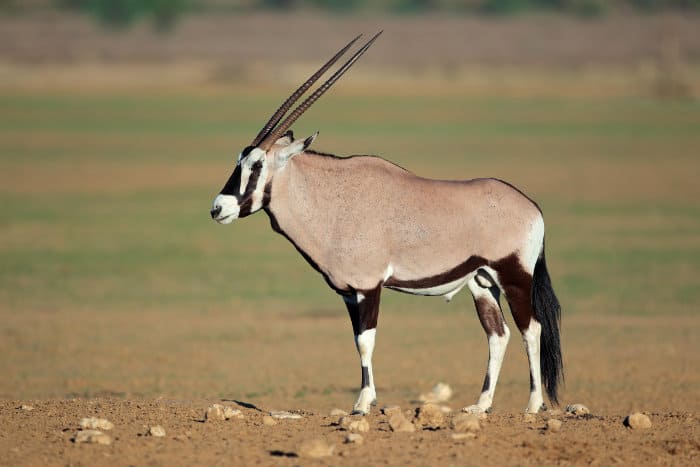 When on safari in Africa, you’ll see plenty of examples of regal and elegant antelope in the wild. Oryx, wildebeest, eland and others are all large and plentiful.

Their sizes do range significantly, but in general, you’ll find that larger specimens will not be gazelle.

Species of gazelle look more elegant and streamlined than most larger antelope. They have incredible speed and grace and can do impressive leaps when moving through the brush.

They are quick – a lot quicker than most other antelopes, and have a particular action known as “stotting”.

Stotting involves an impressive leap with all four hooves leaving the ground. The gazelle will rise up in the air with an arched back, its legs out straight.

This is usually a reaction to a threat, and part of a getaway action. It is truly impressive to see.

Only gazelle stot, and not other antelope.

Side-fact: Some non-gazelle antelope can jump, though it is not considered stotting. The impala, for example, can jump an impressive 3 m high, and travel a distance of 9 m with such a jump.

The diminutive klipspringer – one of the smallest antelopes – is only 60 cm tall, but can jump almost 4 m in height (some claim up to 7 m, but that’s in dispute).

The 19 different types of gazelles 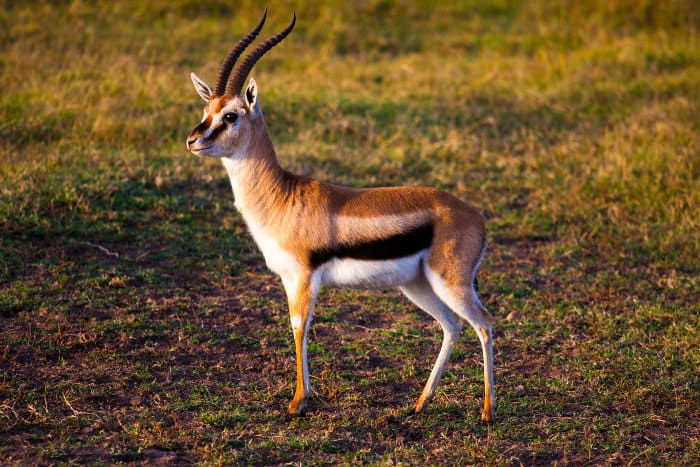 As mentioned, there are 19 recognised Asian, American or African gazelle types within the genus.

The range of antelope species makes it complicated to use a general description.

Here are a few aspects of gazelle and antelope appearances that keen-eyed viewers might observe. 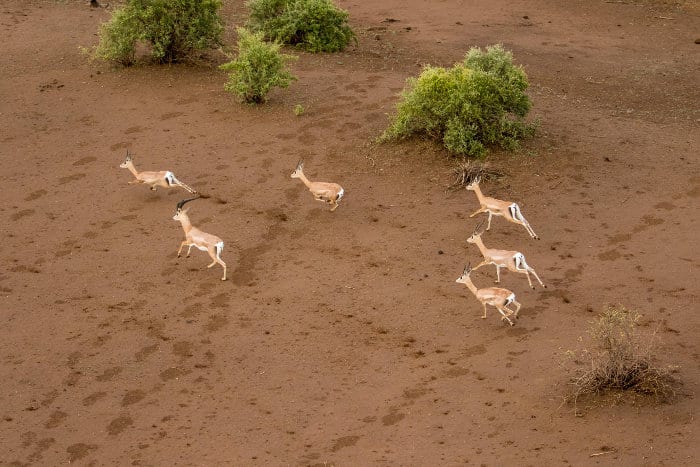 Antelopes are commonly brown and white. But there are several types that range between grey and dark grey, some with stripes or a white face.

Gazelles, on the other hand, are more often tan. They also have white sections, usually the underside or rump, and a dark stripe along the body.

The white rump is significant, as it is an important tool when gazelles are escaping from a predator.

When a gazelle is stotting or bolting from a predator, others in the herd seem to follow the action of the individual ahead of them.

The white rump may be the visual cue for evasive action. This is why you will see the gazelle jumping at the same point and time the one ahead of it does.

Antelopes can grow very large. On average, they can stand as much as 1.5 metres. That said, the range in size is huge, with eland weighing almost a ton, while others – like the royal antelope – as little as 3 kg.

As mentioned, gazelles are on the smaller end of the antelope scale. They typically grow to around a metre high, and seldom tip the scales at much more than 30 kg. 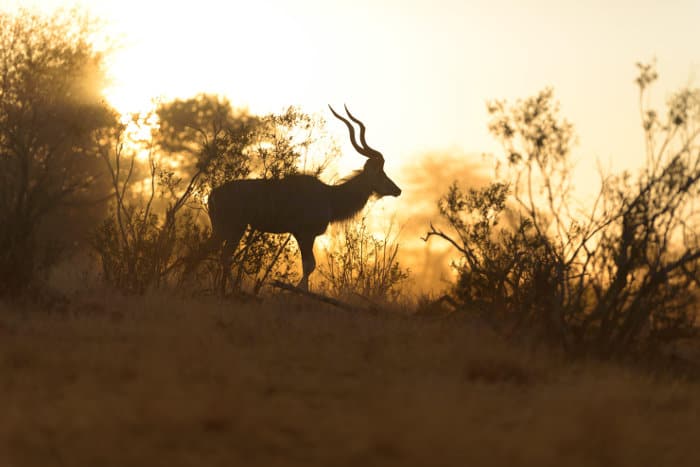 All antelope horns are hollow. They are also permanent.

Not all antelopes have horns – in most species, only the males develop them. On the other hand, both males and females develop horns in the gazelle species.

Antelope horns come in a variety of shapes and sizes. Some have spiralled horns, some have rings, are S-shaped, or even lyre-shaped. The amazing greater kudu antelope horn is huge and spiralled.

Gazelles have slender legs and bodies. They seem athletic and light in comparison to other members of the antelope family.

Many other antelope have large, bulky bodies and large heads. They don’t seem like animals that can jump and move quickly.

Don’t fool yourself. Most antelopes can move at a frightening pace – even the big ones. 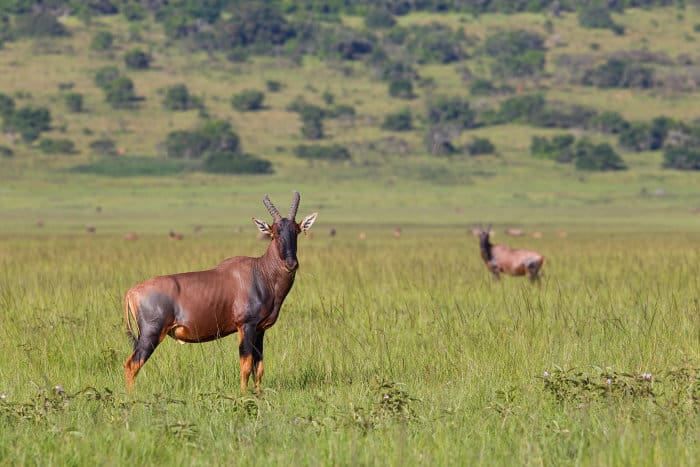 So, do gazelles have a particular preference for living space over other antelopes? Let’s find out.

Where do they live?

Wild antelopes live fairly broadly across most habitats from Asia through the Middle East and especially in Africa.

Chances are, there’s an antelope wherever conditions allow. Humans have occasionally displaced them, due to urbanisation and loss of habitat.

Gazelles, being smaller and generally more skittish of interference, are also fairly widespread.

They often share habitats with larger antelopes, as they have a somewhat symbiotic relationship with food. Gazelles eat shorter grass than the larger antelope.

Most gazelle do prefer open lands and savannas, although the Edmi (also known as Cuvier’s) gazelle lives in the mountains. Maybe it enjoys the solitude. 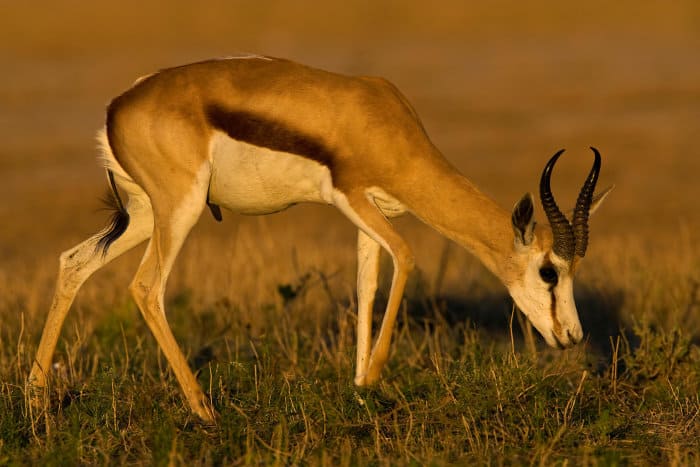 Leaves and grass form the basis of both antelope and gazelle diets. It’s also a major source of hydration.

A Few Odd Behaviours and Facts

If you thought antelopes and gazelles were boring, you’d be wrong.

They have a couple of odd behaviours that make for intriguing discussion. 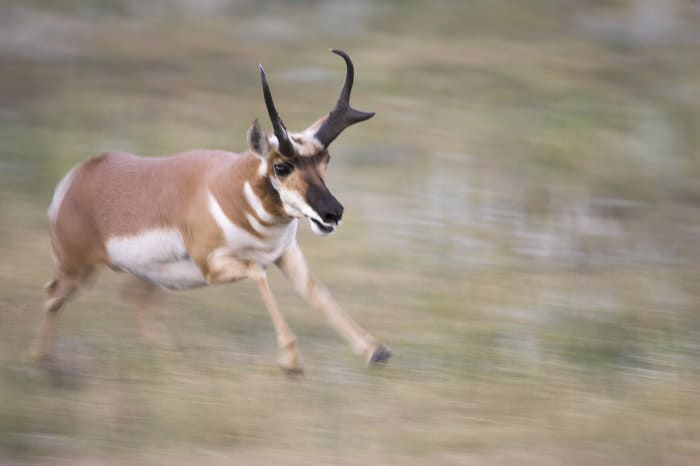 Generally, gazelles are faster than antelopes. That said, the pronghorn antelope – an American antelope and not technically a gazelle – clocks in at 98 kmph.

Springbok, tsessebe, wildebeest and Thomson’s gazelle are also among the fastest antelope, all well over or around 80 kmph.

Are Gazelle or Antelope Endangered?

Sadly, nearly one-quarter of all antelopes are endangered today, according to the IUCN Red List of Threatened Species.

Gazelles, therefore, are also showing declines in populations due to hunting and habitat loss.

Of the most endangered, these are the top five:

Springbok is the only antelope showing a trend with a long-term increase in population.

Thanks to active programs across the African continent, hope remains for the reintroduction and preservation of some of the most endangered antelopes. 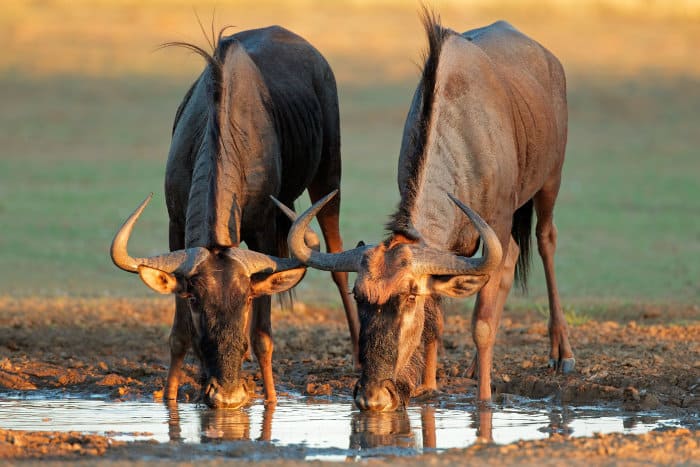 As with all wildlife, the best way to experience antelope and gazelle is in their natural habitat.

Why not book an African safari and tick off as many antelope as you can?

They aren’t that hard to find and are especially gorgeous in the African sun.