With a name like ‘gerenuk’, you wouldn’t be wrong in expecting something a little strange from this animal. And for good reason, this creature is instantly recognizable thanks to its extraordinarily long neck. It looks like a giraffe and a springbok antelope rolled into one pretty cute package.

Strangely enough, even though the gerenuk has a remarkable appearance, many people have not heard of this little antelope. Which is a pity, as it has some incredible things going for it!

This post will take a look at some interesting facts about the gerenuk. You’ll learn more about this antelope’s characteristics, habitat, adorable babies, and predators.

What is a Gerenuk? 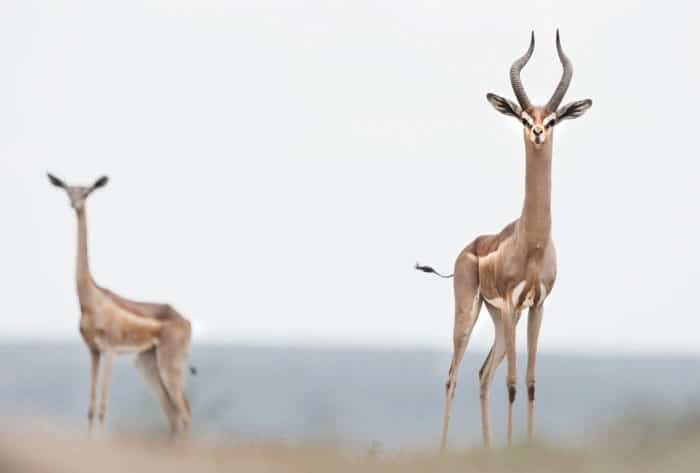 The gerenuk is the longest-necked species of the gazelle family, hence its other name, giraffe gazelle. Gerenuk means “giraffe-necked” in Somali. If you haven’t guessed by now, the neck is a distinguishing feature of this little creature.

This animal lives in the drier regions of East Africa and in the Horn of Africa. The Horn is a peninsula that lies on the southern side of the Red Sea. It stretches many kilometers into the Guardafui Channel, Somali Sea, and the Gulf of Aden.

The gerenuk has two other names, besides giraffe gazelle. It is also known as Waller’s gazelle and its scientific name, Litocranius walleri.

You may have noticed that this post describes the gerenuk as both an antelope and a gazelle. When you go on a safari in Africa, you’re bound to see plenty of both. But, with that said, you might be curious about the difference between the two.

The answer might seem like a bit of a riddle. All gazelles are antelope, however, not all antelopes are gazelles.

Sounds like an IQ test question, doesn’t it? Luckily, it’s not that difficult to unravel.

Gazelles are a part of the antelope group, which belongs to the Bovidae family. This family covers a large variety of animals including impala, waterbuck, wildebeest, and a number of others.

All antelopes and gazelles have even-toed hooves and four-chambered stomachs. Where they differ is in their size and their horns.

Gazelles are generally smaller than other antelopes. This is easy to see when you compare an eland, which is roughly the size of a cow and can weigh over 950 kg, to a small Thomson’s gazelle.

Then, in the gazelle group, both the male and female animals usually have horns. The gerenuk is an exception to this rule.

With antelopes, it is normally only the male who has horns, like with the impala. Which is why an impala is an antelope but not a gazelle. 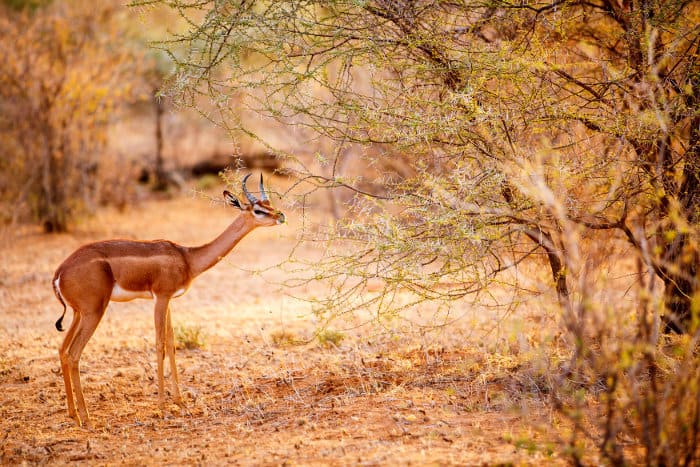 You’re already familiar with the gerenuk’s rather absurd neck. Here are some more of this animal’s characteristics.

The gerenuk fits the classification of gazelle thanks to its small stature. At shoulder height, this animal stands between 80 and 105 cm. It also weighs between 28 and 52 kg.

This antelope displays a two-tone coloration, similar to that of an impala. The coat has a reddish-brown “saddle” or back, while the rest of the body is fawn to buff. The gerenuk’s belly, rump patch, eye rings, chin, and the insides of its ears and legs are cream colored.

Atop its long and slender neck sits a wedge-like head with innocent-looking, large, round eyes. The limbs resemble the neck in their slimness and length.

The females are smaller than the males and also claim their queenships by the dark patch present on their hornless crowns. The males, on the other hand, announce their stag status through their “s”-shaped horns. Their horns curve backward and can measure between 25 and 44 cm. 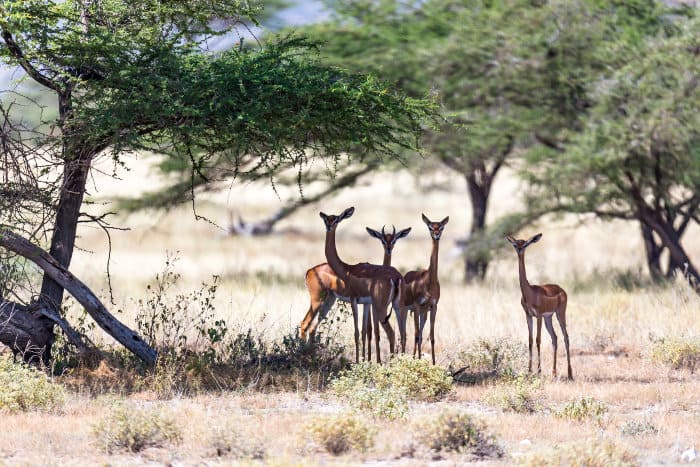 The gerenuk is more antisocial than other members of the antelope family. You can expect to see these animals wandering around alone or in small groups. Herds of 12 or more are rare to find.

Fitting the Bambi stereotype, this antelope is shy and timid. When it’s disturbed, this animal’s major survival tactic is avoiding detection by standing dead still undercover. This might be effective for poorly-sighted predators or a T-rex, but not for sharp-eyed killers.

They roam the Horn of Africa from southern Djibouti, Somalia, and Ethiopia to Kenya and north-eastern parts of Tanzania. They generally live in open scrublands, lowland arid thornbush, deserts, and woody vegetation.

This long-necked gazelle might not be as well known (or hunted) as some of the Big Five, but their conservation status is still deemed ‘near threatened’. Their population has decreased because of humans encroaching on their habitats. 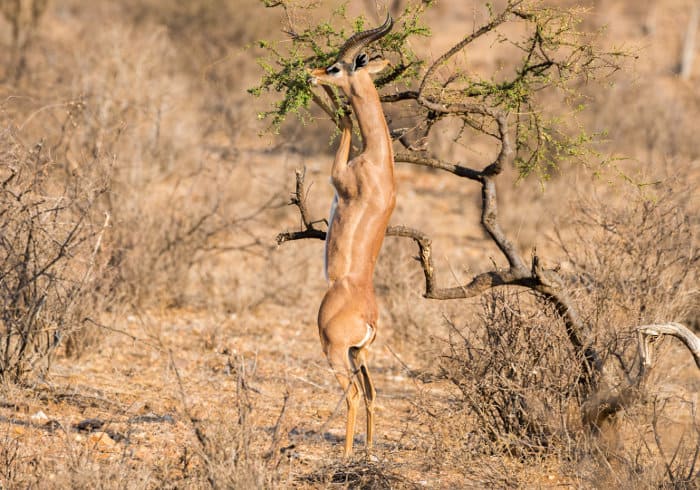 Gerenuks have some peculiar eating behaviors. Their lengthened limbs and necks mean that they are perfectly positioned to munch on high up foliage. Their pointed snouts also help them reach their full nibbling potential.

This animal has strong hind legs, wedge-shaped hooves, and special vertebrae that enable it to stand on its hind legs. This means it can reach much higher than standard-sized antelope to get to a food source.

As a result, the gerenuk diet has plenty of moisture in it as they can capitalize on resources that water-dependent animals can’t access. They eat a variety of plants, from shoots and thorny bushes to flowers and fruits.

The breeding behavior of these animals is just as unique as their appearance. Their courting includes some interesting features. 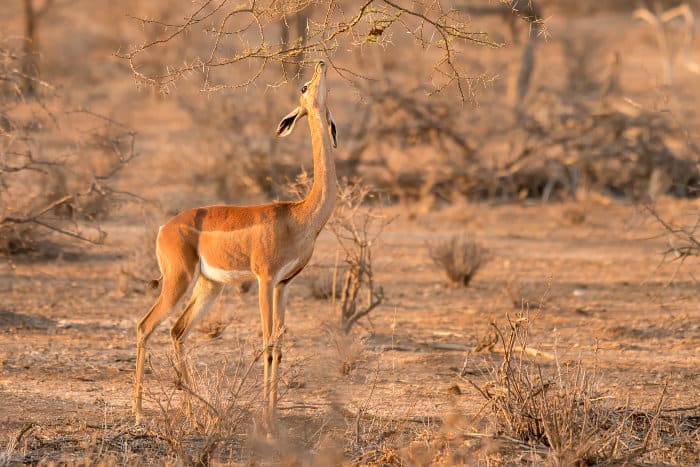 The male antelope begins the mating ritual by showing off his horns and neck in a sideways pose. If the female responds positively, the male will then mark the female on her thigh. He does this with the contents of his preorbital glands. You can find these glands in front of their eyes.

He will then guard her and follow her around until she becomes ready to mate. He samples her urine periodically by performing a lip curl test. He will know she is ready to mate when he detects a change in her urine.

Female gerenuks have between a six and seven-month-long gestation period. Many give birth during the rainy season, but they do breed throughout the year.

Females can conceive again just weeks after their last birth. They usually give birth to one young per pregnancy. 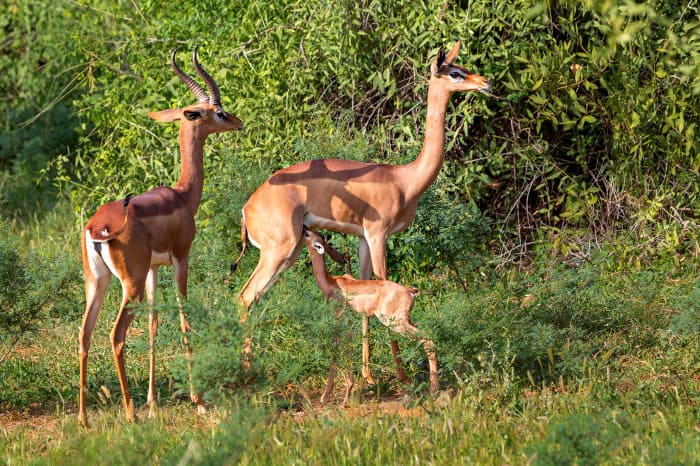 A baby gerenuk is possibly the cutest animal you will ever see. The big ears, wide eyes, and miniature size will remind you of the opening scene in Bambi, minus the tragedy and tears.

These adorable creatures are up and walking mere minutes after birth. Their mothers look after them until they wean them. Mothers wean young females at one year and wean males at about one and a half years of age.

These animals clock a top speed of about 56 km/h. This makes it quite a bit slower than other members of the gazelle family, like the springbok. The springbok can reach speeds of around 88 km/h.

In fact, the gerenuk is more of a trotter than a galloper, which is a disadvantage when it comes to predators. 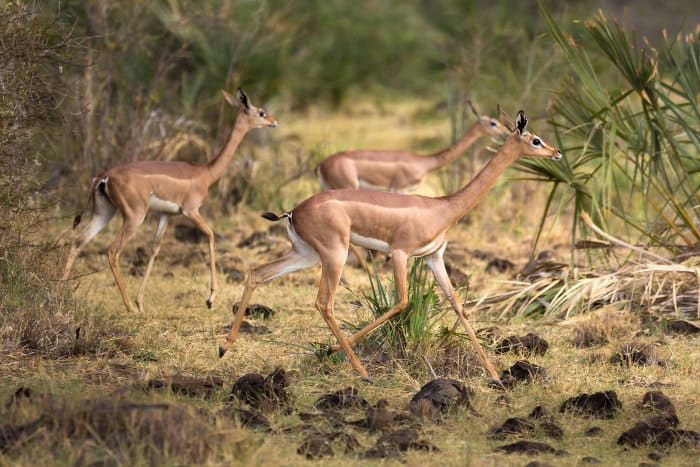 Waller’s gazelle does not lack predators. This antelope’s hunters include:

The gerenuk was not created with the best defense instincts in mind. As mentioned, its first method of protection is to stand still undercover. They act like young, hiding in the shrubbery.

Unfortunately, it gets worse. When truly alarmed, this animal will often try to trot (not sprint) away from danger. Sometimes, they can even freeze in times of threat, making a lion’s job that much easier.

Now, for the fun and interesting facts about this sweet and absurd antelope. 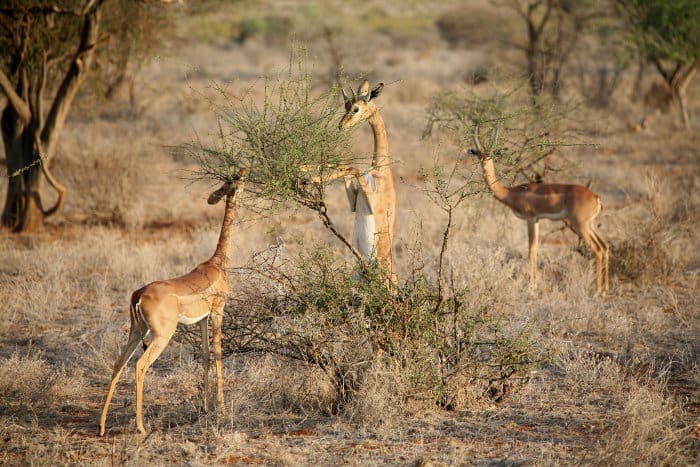 A gerenuk is similar to a giraffe in that it doesn’t really need to drink water. Yes, both these creatures eat plants that contain the water they need to live. This is why they can survive in desert habitats.

These creatures may be small in size, but they make up for it with their impressive range of vocalizations. These sounds include loud bleating, whistles, and buzzing.

If they’re alarmed, they emit a buzz. When annoyed, they whistle, and when terrified, they bleat loudly. Mothers also use a soft bleating when speaking to their babies.

Mother of the year 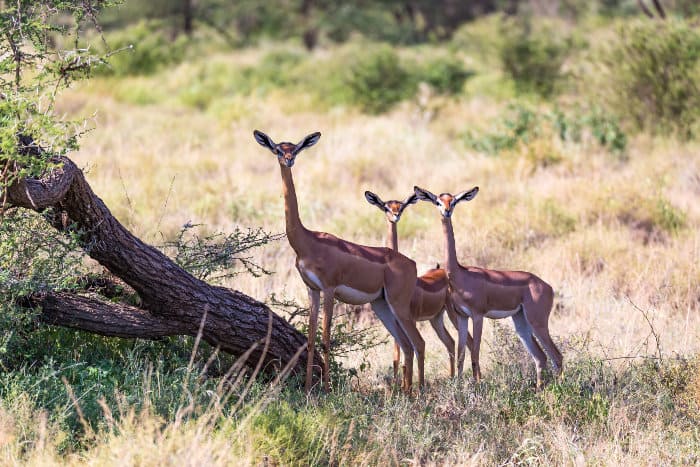 Gerenuk females have a good reputation as mothers. After the birth of their young, they clean their babies immediately. They feed them two to three times a day. The mothers also finish up their leftovers to prevent the leaving of any traces that would attract predators.

The Gerenuk: A Long Story Short

This little animal packs a personality punch with its peculiar features and behavior. Unfortunately, this creature is increasingly under threat due to habitat loss. Luckily, it doesn’t have to end badly.

You can help. Plan your next safari adventure so you can see the incredible gerenuk in the wild. Safaris promote conservation through ethical tourism. This gives these animals the space and protection they need to survive and thrive.