The storied African savanna is a biome packed with wildlife, despite its relatively dry climate. Some animals may find the terrain vast and inhospitable. Antelope, on the other hand,  is one category of animal that seems to have adapted well to the open grasslands.

Among these, the majestic roan antelope is a survivor. Over the years, roan numbers have declined to frightening levels due to hunting and poaching. Thankfully, efforts to protect the species seem to be making an impact.

Roans are significantly less elegant than their close cousin, the sable. Yet their striking black and white faces and sheer size make them a formidable force on the African plains. Let’s take a closer look at this beautiful antelope.

Like most antelope, roan are beautiful and amazing to observe in the wild. Here’s how you tell a roan from other bovids. 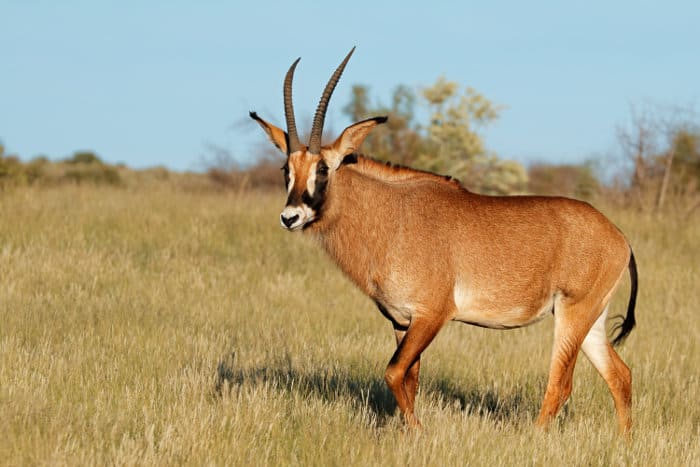 The roan antelope is a large beast! It presents a powerful figure, standing tall with a thick, muscular neck. It has a rigid-looking mane and a facial marking that makes it look somewhat fierce. Add to that a pair of impressive horns and a stocky, dense body, and you have a formidable animal contender.

In fact, the roan antelope is one of the largest bovids in Africa. Only the eland, bongo, some very large kudu and African buffalo can claim to be bigger. An adult roan can weigh as much as 220 kg, and be as long as 1,2 meters from head to the tip of the tail.

The white facial markings of the roan are distinctive. It looks like a playful clown mask to go with a  mainly brown and gray body. The long, tasseled ears are another way to identify roan. You may also notice that its legs tend to be darker than its body. 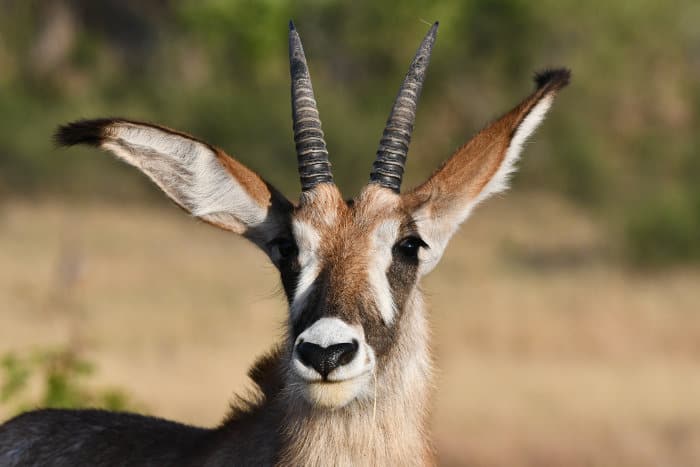 These horns are useful as weapons in fights over territory – or more accurately, over female harems.

They can reach up to a meter in length in males. Female horns are shorter, though no less effective if used in defense. Unfortunately, their impressive size also means that trophy hunters covet the antelopes for their horns.

Side fact: Antelope is different from deer because of its horns. Antelope have horns and do not shed them. Deer have branched antlers and shed them occasionally.

They typically make a high-pitched whistling sound or a snort. When in distress, they may also hiss, especially when wounded.

Roans use a snorting sound to alarm danger. This is quite different from the loud barks that are common in many antelope. 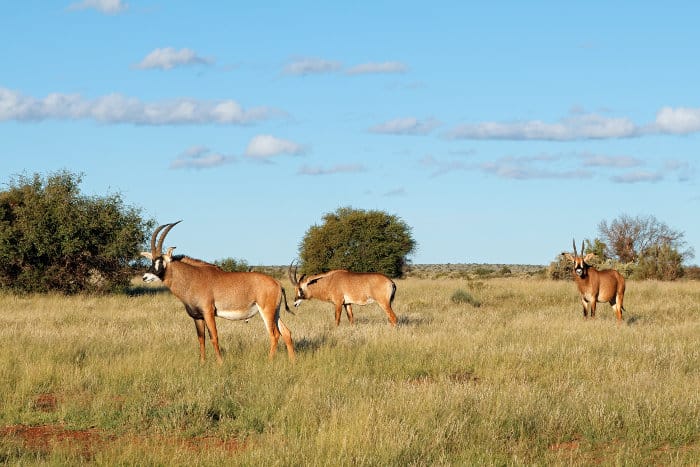 A quick note on the scientific name for the roan antelope: Hippotragus equinus. There are three species classified in the Hippotragus genus – The roan, and its cousins, so to speak:

Roan Compared to Other Savanna Antelope

We’ve mentioned that roan are large bovids. They are actually the fifth largest antelope species in Africa.

By comparison, a roan can move quickly at around 57 km/h, which isn’t bad for such a large animal. That said, it is less likely to run from danger for long, often choosing to turn and face it head-on! 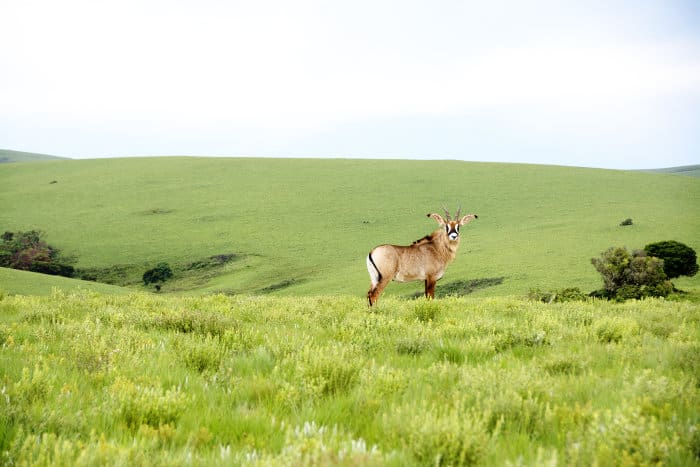 Sadly, the roan antelope’s habitat has declined significantly due to human settlement expansion, hunting, and poaching. These days, you’re more likely to see a roan antelope in West and Central Africa. They are not as common in Southern Africa anymore (only a few reside in the Kruger National Park).

You can find them in the wild between the southern regions of the Sahara, as far south as Botswana. They frequent the woodlands and grasslands and are equally at home in heavily wooded areas or wide-open spaces with few trees.

Roan antelope are not geographically territorial. However, males do exile other males from their female herds by as much as 800 km. A male encountering another male usually results in a fight for dominance, horns aloft! The herd itself  – up to 20 females and juveniles or more – may move around, though.

Another interesting aspect of herd life is a loose family structure. The herd won’t always be tight-knit, and various females and young will move off from time to time, only to rejoin the group later. That said, most of the females will stay in the general vicinity, known as a maternal home range. 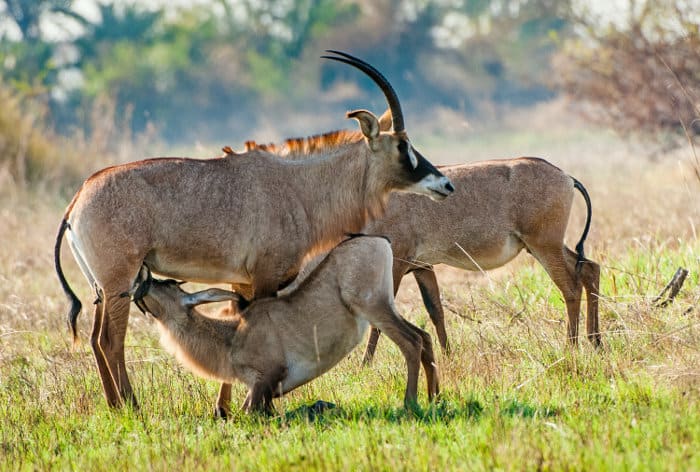 Roan live up to 17 years in the wild. But to get there they have to survive their first few weeks. The mortality rate among roan calves is extremely high – up to 80% of them will not survive past seven weeks.

Calves weigh around 15-20 kg at birth and reach sexual maturity at around two years.

Many roans die of natural causes, however, they are also susceptible to predators such as wild dogs, hyenas, lions, and crocodiles. Leopards and jackals also pose a threat to calves.

An adult roan is a much more difficult proposition for a predator. Unlike many other antelope or deer, they often stand and fight, rather than run in fear. The horns can be deadly even for the largest of predators, as many big cats have found to their detriment.

Roans love grass, especially medium length grass. They graze the tops of much of the grasslands across the regions where they roam, actually preferring the open fields over the heavily wooded areas.

They also sometimes feed on woodier species of plants like acacia tree pods or even herbaceous shrubs. Outside of these, they seldom wander from good grazing ground. They also need to be close to water most of the time, as they tend to drink lots! 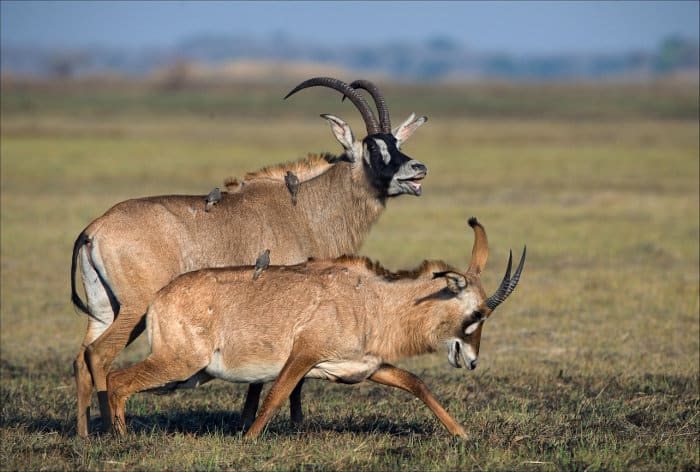 Here are a few more random yet fascinating facts about the roan animal:

Roans are beautiful and impressive additions to the family of antelope, though they present a few conservation challenges. An estimated 60 000 roan remain on the African continent.

They generally do not compete well with other antelope for grazing land, so it’s a delicate balance to consider when introducing them to a region.

Destruction of these grasslands due to human expansion also pose a significant threat, especially in western Africa.

Conservationists are also split on the question of whether to breed subspecies in order to diversify the gene pool of the roan in Africa.

The Future for the Majestic Roan 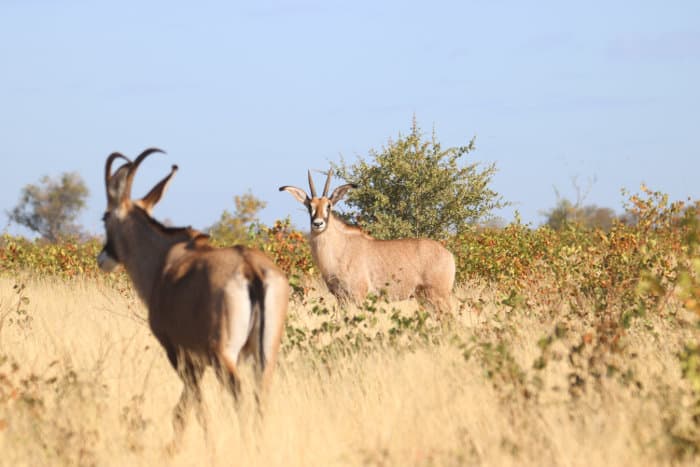 Despite the challenges, many believe the future of the roan antelope is positive. Efforts to intervene in the sharp decline of its population are gaining momentum.

Whatever the future, it would indeed be a shame to lose such a majestic and charismatic species from our planet. It may well be worth planning your next safari with this in mind.