If you’re a birder or simply just curious about wildlife facts, you may ask yourself, “what are the largest eagles in the world?” While all eagles are big birds, some species are larger than others.

Eagles are impressive, powerful birds of prey that soar through the blue skies with freedom, pride, and authority. Many of them are among the world’s most feared apex predators.

They aren’t always at the top of many safari-goers’ animal sightings bucket lists. However, admiring these large birds fly effortlessly as their wings cut across the sky is one of the most majestic sights.

In this article, we take a look at the largest eagle species, so you’ll know what to look out for on your next adventure.

Wondering, “what is the biggest eagle in the world?” 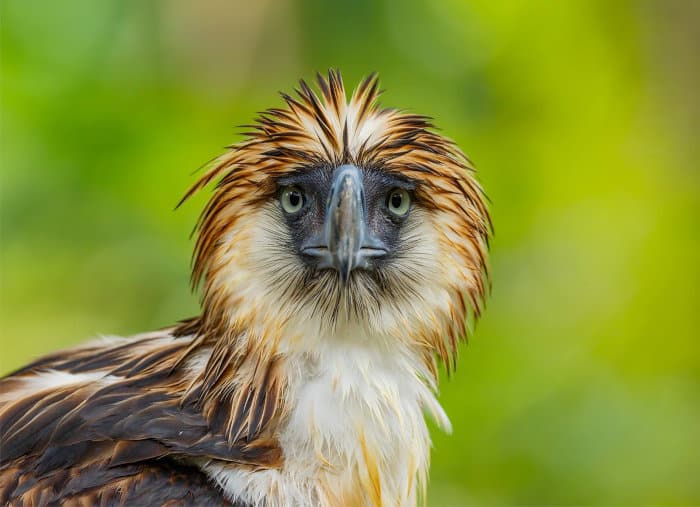 The Philippine eagle is one of the world’s largest and rarest birds.

This big predator boasts an eye-catching appearance, with creamy-brown feathers, blue-gray eyes, and powerful dark claws. It has an average wingspan of two meters and a weight ranging from 3.6–8.2 kilograms.

Many consider it the largest eagle in terms of length and wing surface area. With an average height of 91 centimeters, the Philippine eagle is the longest eagle in the world.

In addition to being one of the biggest, sadly, it is also one of the world’s most endangered raptors. You can find the Philippine eagle on four major islands: Luzon, Leyte, Samar, and Mindanao.

The Philippine eagle is the national bird of the Philippines. It was formerly known as the monkey-eating eagle.

You might be thinking, why is the Philippine eagle called the monkey eagle? Well, that’s because natives once believed that they only ate monkeys.

However, Philippine eagles also dine on a diet of flying squirrels, bats, snakes, lizards, civets, and other birds. 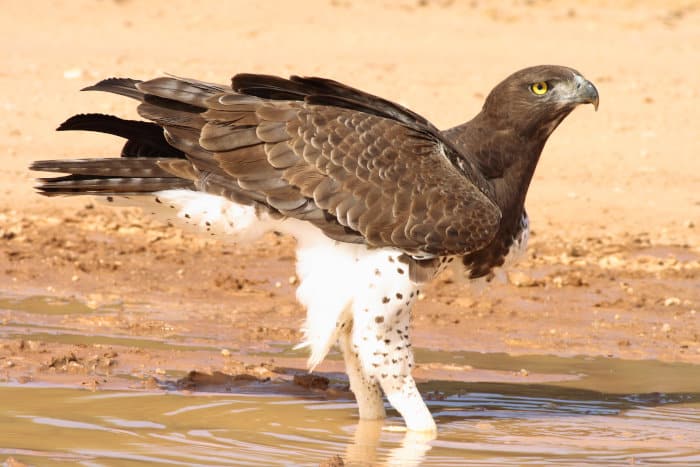 What’s the biggest eagle in Africa? The mesmerizing martial eagle comes in and snatches that title.

It weighs roughly 6.5 kilograms and has a wingspan of up to 2.6 meters. On average, the martial eagle is around 86 centimeters long.

This endangered species is also one of the most powerful birds in the world. Martial eagles have the ability to knock a person down, break your arm, or carry away kids.

But don’t worry; these birds tend to be solitary and shy towards humans and rarely come close to them.

Martial eagles have impressive eyesight. In fact, it’s three times better than that of humans! They can spot prey over distances of around five kilometers. And their long and sharp talons can instantly kill small animals.

Martial eagles aren’t picky eaters, and their diet can vary. Some animals on their menu include monitor lizards, guineafowls, monkeys, and impalas. 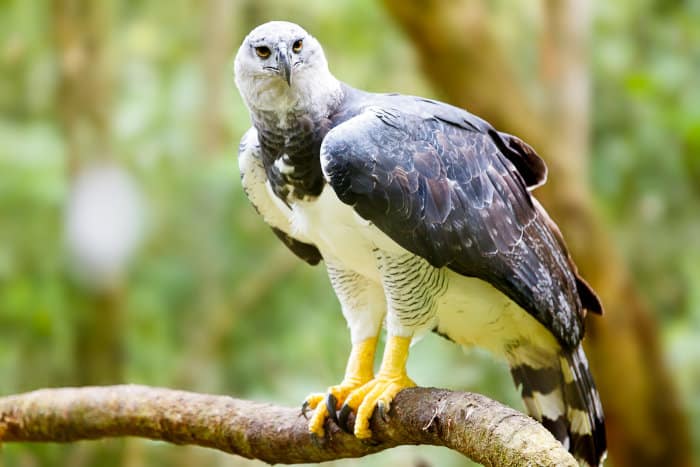 The harpy eagle is the national bird of Panama and one of the most powerful birds of prey. They have distinctive coloration, sporting white undersides, gray heads, and black backs, wings, and breasts.

The biggest harpy eagles can reach lengths of 1.7 meters. The female birds are larger, weighing 6–9 kg, while males weigh around 4–5 kg.

Their wingspan can reach up to 2.2 meters across. Although it is shorter than some of the other big eagles, it allows them to move more easily in the dense forests in Central and South America.

When it comes to its favorite prey, this rainforest-dwelling raptor primarily feeds on sloths and monkeys. 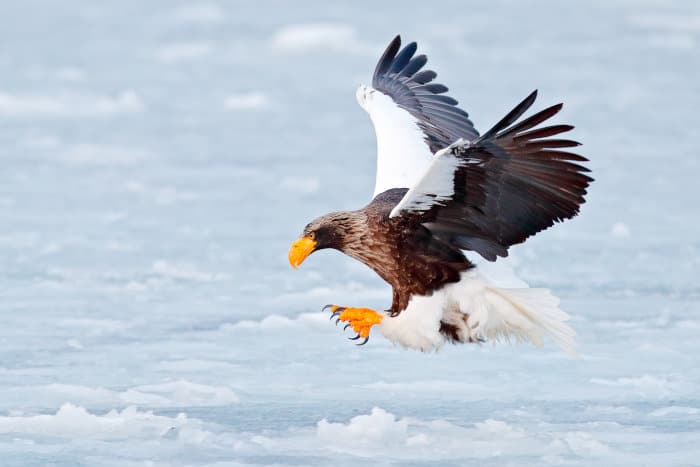 What is the largest eagle in the world by weight? The Steller’s sea eagle is the heaviest, weighing roughly 9 kg.

The Steller’s sea eagle’s wingspan is approximately 2.5 meters, and its length ranges between 0.85–1.05 meters. These enormous birds have black and white bodies with striking bright-yellow beaks.

As its name suggests, you’ll find them near the sea. Steller’s sea eagles primarily live in coastal areas in Asia. Unfortunately, this vulnerable species has declining population sizes.

They prefer to be in areas where salmon is plentiful. However, Steller’s sea eagles also feast on crabs, shellfish, cod, squid, ducks, and other animals.

Like many eagles, you may also spot them stealing food from other birds. 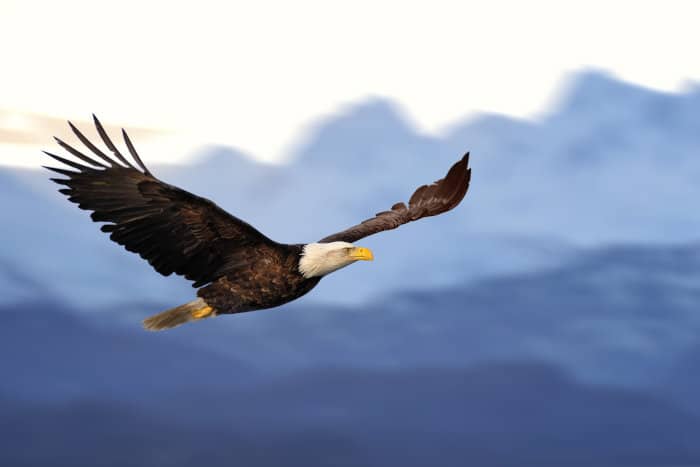 The American bald eagle is the national bird of America and one of the most recognizable birds in the world.

It boasts a dark-brown body and wings, with a contrasting white head and tail. Its yellow beak, eyes, and feet add to its stunning appearance.

While its name may make you think that this bird is bald, it rocks a full head of white feathers.

So how big are American bald eagles? They weigh between 3–6.3kg.

Adult males are around 90 centimeters long, while females can reach up to 108 centimeters. The American bald eagle’s wingspan is about 1.8–2.3 meters.

These large birds of prey prefer to build their nests near large bodies of water. So you may spot them near lakes, reservoirs, coastlines, and rivers where fish is abundant. 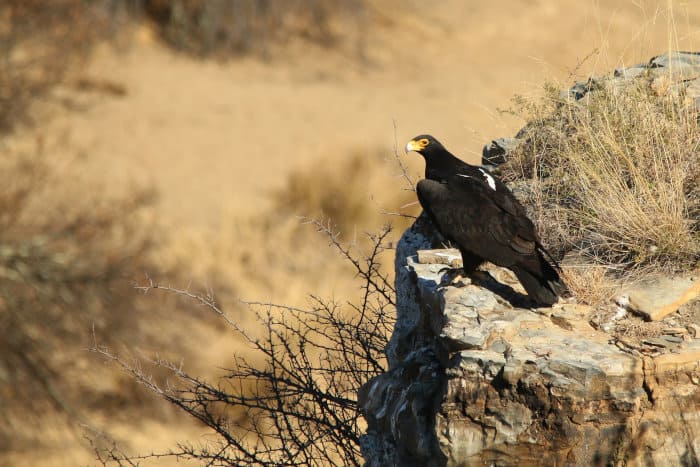 The Verreaux’s eagle is a large bird of prey in Africa. They live in hilly and mountainous regions with rock ledges, cliffs, and caves.

These cliff-dwelling black eagles have an impressive wingspan of 1.8–2.3 meters. On average, Verreaux’s eagles weigh 4.2 kg and reach about 80 centimeters in length.

Their favorite meal is a rock hyrax. However, they also eat small mammals, reptiles, and birds in times of scarcity.

Verreaux’s eagles practice “obligate siblicide”. Females lay one to two eggs per clutch with an incubation period of 38–41 days. If two chicks hatch, the younger one typically dies of starvation or bullying by its sibling. 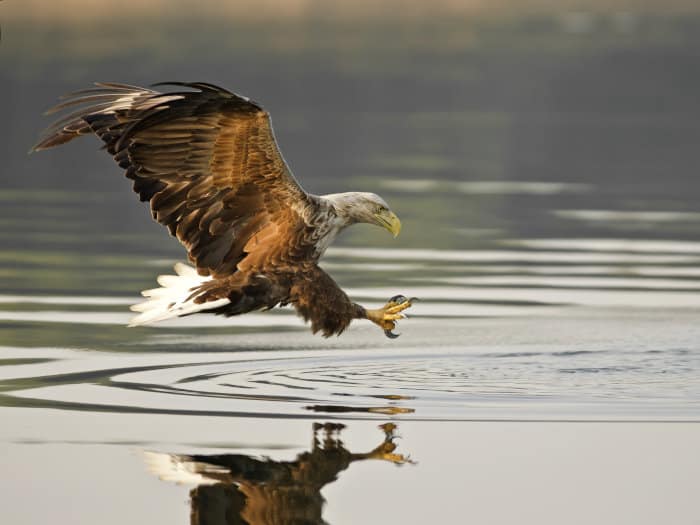 It’s time to bring out your measuring tape, as the white-tailed eagle’s wingspan is a whopping 2.4 meters. In fact, it has one of the largest wingspan among living eagles.

White-tailed eagles are around 66–94 centimeters in length, with an average weight of 5 kg. If you’re wondering, “what is the largest eagle in Europe” the white-tailed eagle claims that title.

White-tailed eagles have beautiful brown body plumage with pale heads and white tail feathers. They primarily live along rocky coastlines, estuaries, and lochs near the sea. 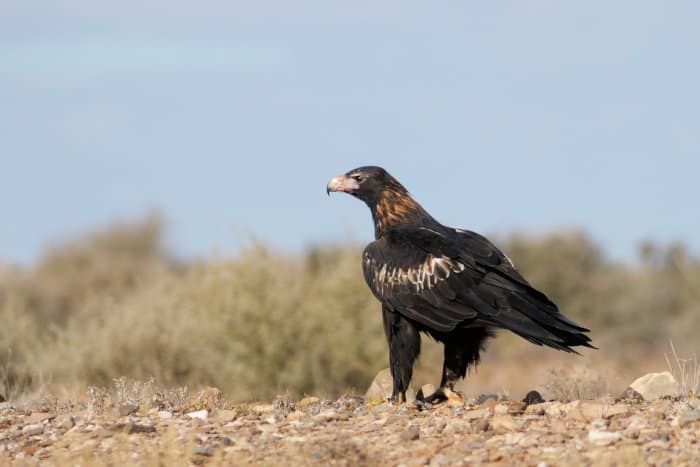 The wedge-tailed eagle is the largest bird of prey in Australia. You can distinguish them by their dark brown bodies, pale beak, white feet, and wedge-shaped tail.

So, how giant are these eagles? Wedgies weigh between 3–5.3 kg, with a remarkable wingspan of 2.3 meters. On average, their length ranges between 100–120 centimeters.

These magnificent birds prefer to fly around wooded, forested landscapes and open lands. They mainly feed on ground-dwelling animals, such as wallabies, rabbits, reptiles, and small kangaroos. 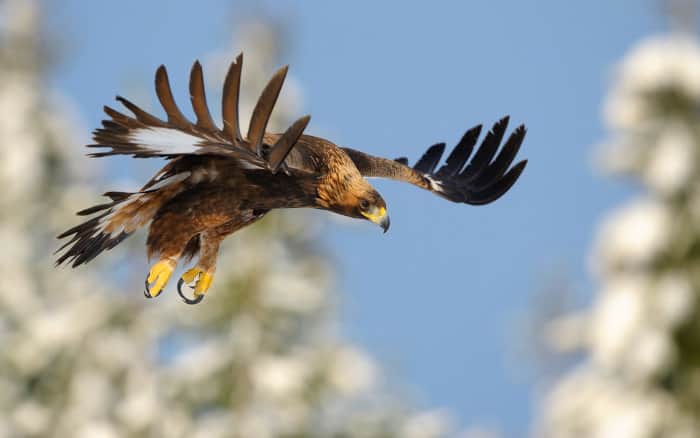 The golden eagle is the largest hunting bird in North America. They are also one of the most popular birds of prey in the northern hemisphere.

Like many other raptors, male golden eagles are smaller than females. Golden eagles are 66–100 centimeters long and weigh around 3–6.8 kg. Their wingspan is quite impressive and can reach up to 2.2 meters.

The golden eagle population is stable in North America, and you can spot these beautiful birds in Europe, Asia, and parts of North Africa. They love open terrain and inhabit mountains, foothills, and plains.

If you ever find yourself in a remote area near grasslands in North America, be sure to look up at the tree tops or cliff ledges for a nest! 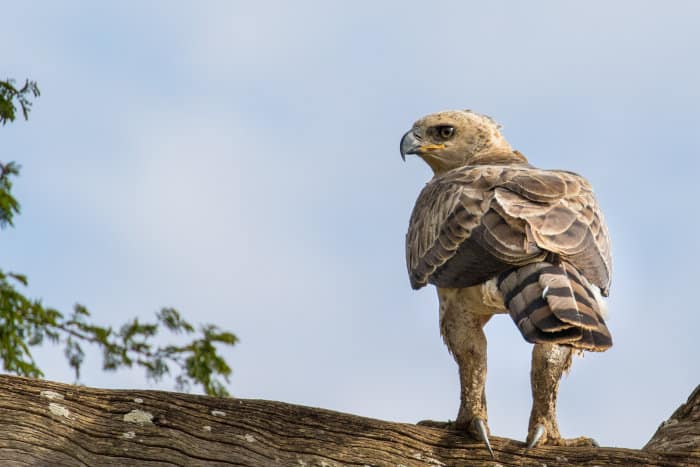 The crowned eagle is not the largest in Africa — that honor goes to the martial eagle. However, it’s the most powerful eagle on the continent, and its size is still pretty spectacular.

African crowned eagles weigh around 4.7 kg, with a wingspan of 2 meters. Their length ranges from 80–99 centimeters — giving them a slight advantage over the martial eagle.

The crowned eagle has an eye-catching appearance with a funky hairstyle of dark feathers tipped in white.

You can find these beauties living and hunting from the trees in sub-Saharan Africa. They hunt similarly to leopards, relying on stealth to get close before accelerating toward their prey.

What Was the Largest Eagle in the World That Went Extinct?

The Haast’s eagle is the world’s biggest eagle known to have existed. This extinct species once lived on the South Island of New Zealand.

Marvel at the Biggest Eagles in the World 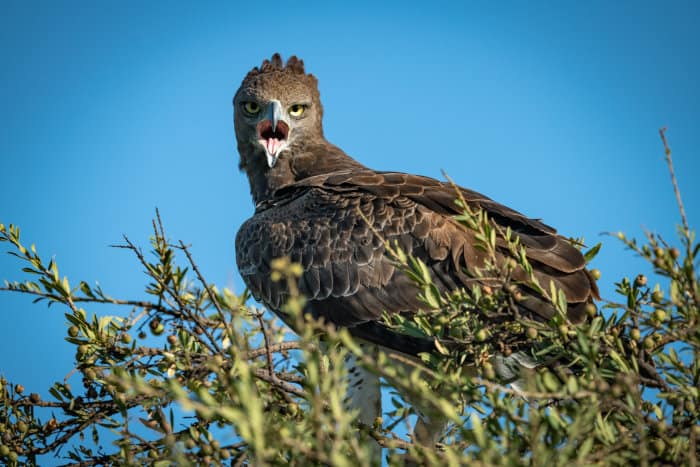 There you have it, the top 10 largest eagles in the world. Hopefully, next time someone asks you, “how big is an eagle” you can list the sizes of the enormous ones.

Although forest-dwelling eagles usually have slightly shorter wings to help them maneuver around trees while hunting, all of these species have remarkable sizes and unique traits.

While learning about these spectacular birds of prey is fascinating, seeing them perched on tree branches or soaring in the sky is magnificent.

So why not book an African safari to see the mighty martial eagle? 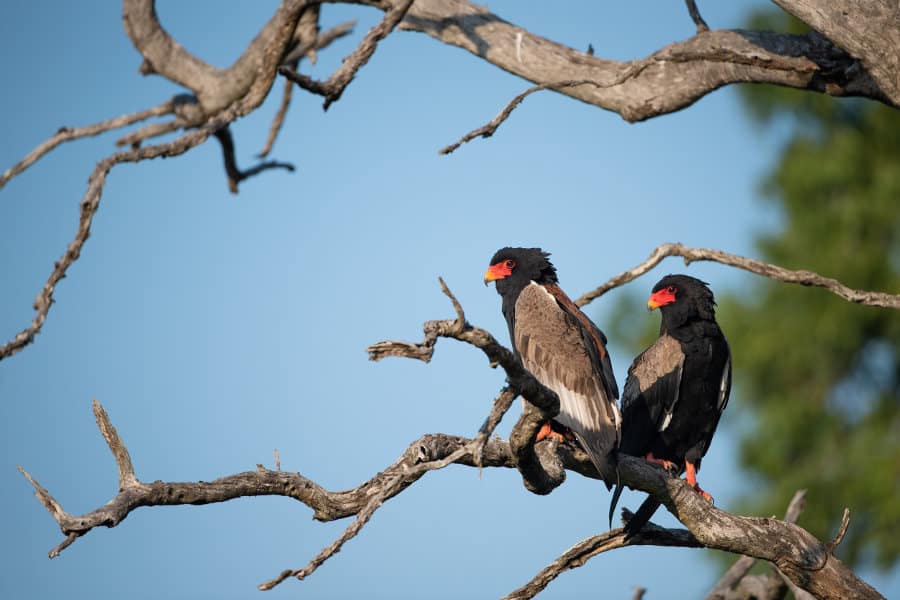 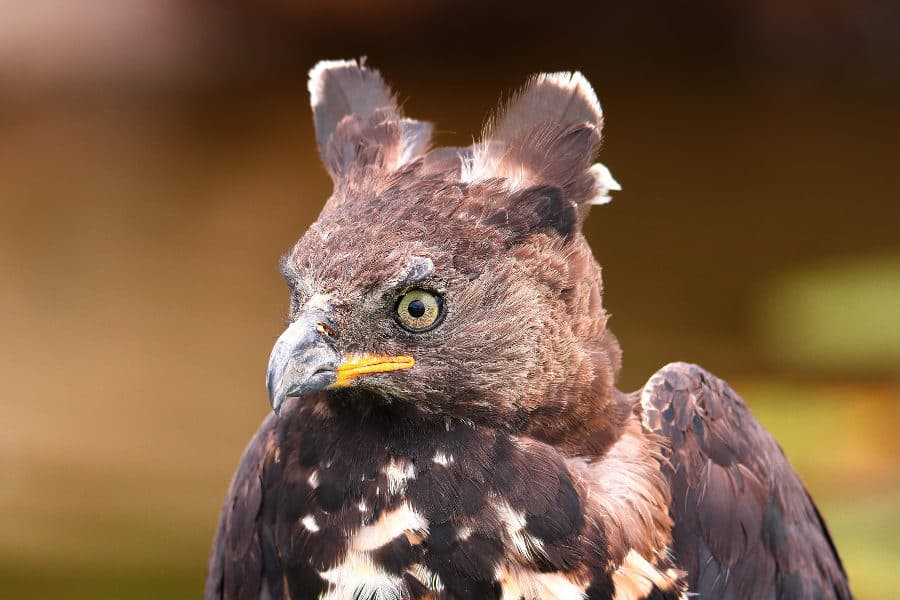 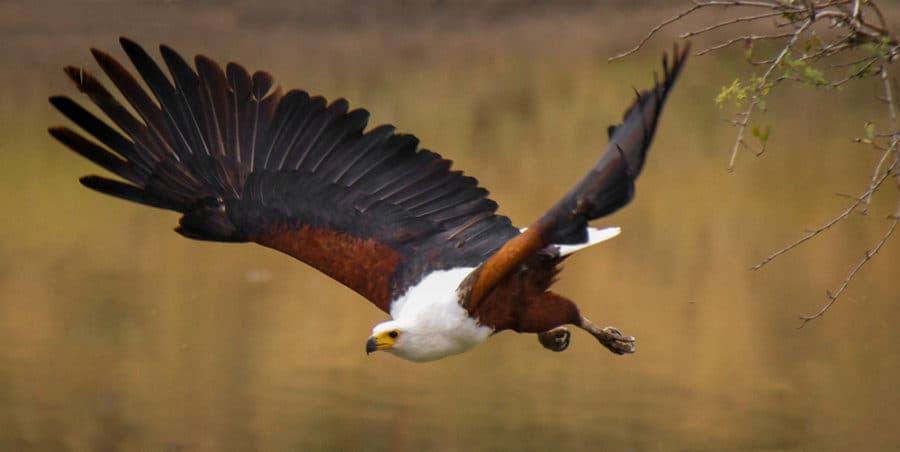