With bright green bodies, a cheerful chirp, affectionate nature, and an energetic personality, the peachy-faced lovebirds are social animals that live in large colonies or flocks.

In fact, peachy-faced lovebirds will often form pairs with other members of their flock and share nests. They’ll even show affection to other species like humans by gently nibbling on your fingers.

The rosy-faced lovebirds are easily found in places like the United States and Japan as pets. However, it’s unfortunate that many lovebirds across the world are cage birds – far from the likes of their natural habitats in Africa.

These natural beauties thrive in the wild and nothing beats seeing birds on a safari.

Before embarking on a wildlife adventure it’s worth discovering the many incredible facts about the peach-faced lovebirds.

The rosy-faced lovebird, Agapornis roseicollis, gets its name from its glorious appearance and gentle nature towards others. There’s so much more to these friendly chirpers that we don’t get to appreciate when they’re kept in cages.

These 11 facts are both weird and wonderful and show a side to these sociable creatures that often go unnoticed.

1. The rosy-faced lovebird is the most beautiful lovebird 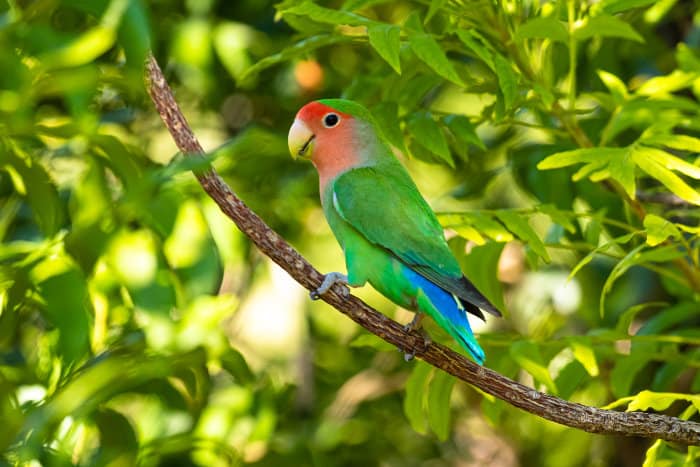 The first thing you’ll notice about this adorable little parrot is its soft rosy face that contrasts against a bright jungle green. You’ll see that the rosy red is darkest in between its eyes and below its green forehead.

Surrounding its curious brown eyes is a cream-colored circle, which allows the peach colors to stand out even more. It’s also got a matching cream beak (which seems to be working overtime when it comes to chirping loud and proudly).

The majority of this tiny bird’s body is a bold green – much like the Knysna turaco.

Being among the smallest species of parrots, they’re often mistaken for a budgie. However, budgies have long pointed tails, while the lovebird is stockier with shortened, blunt tail feathers.

Peeking out from amongst the green is a bright blue rump. If you happen to spot this parrot bobbing around on a branch, you’ll spot the blue feathers making a bold appearance.

2. Although the cutest, they’re also the largest of the lovebird species

There are nine species of lovebirds, averaging around 10-14 cm. The peach-faced reaches an average size of 15 cm, weighing 55 grams.

The peach-faced lovebird lifespan is 12 to 15 years.

3. Unlike most bird species, the male and female are very similar in appearance 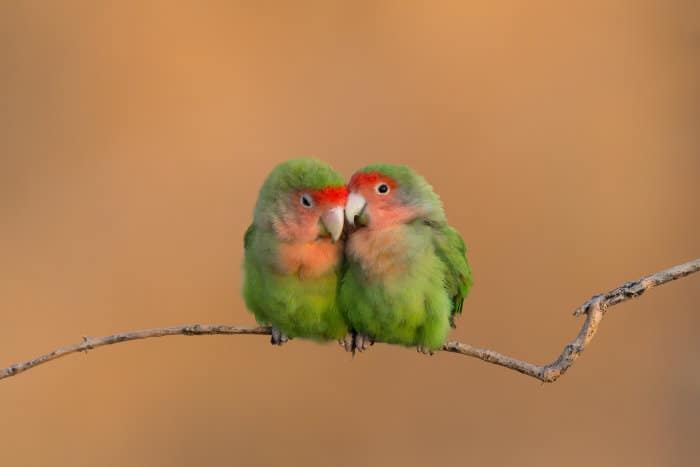 If you were to spot a pair in the wild, it would be tough to tell the difference. Both males and females share the same characteristics of a rosy face and bright green body. The only giveaway between the two would be that the female is slightly duller.

On top of a slight color variation, the female is the one who weighs slightly more than the male.

4. Peach-faced lovebirds really are in love

It’s not often that you find a pair of animals being romantic. For most organisms, mating is purely biological – it’s a way of passing on their genetic material.

Lovebirds, on the other hand, have a strong monogamous bond that goes further than simply producing offspring. Instead, monogamy is essential to the life and behavior of these birds whose daily routine relies on supporting one another.

Lovebirds can start finding their partners from as young as two months old – which can last up to 15 years. Once paired, they will leave their nests and find their own.

If these lovers separate, or if a mate dies, the bird starts to show erratic behavior, often likened to the behavior of people suffering from depression. 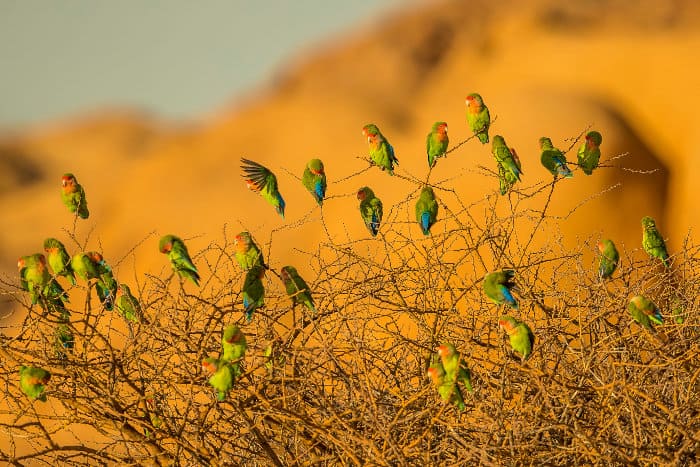 In the wild, these chirpers live in the southwestern portion of Africa. They traverse the area stretching from southwest Angola to northwest Africa. The peach-faced lovebird’s habitats include the outskirts of deserts and woodlands – preferring areas where there are fewer trees.

The arid environment in Namibia is also a favorite amongst the rosy-faced. It favors the vegetation of the open and dry spaces with sparse shrub growth.

When nesting, these birds always choose a location that is close to bodies of freshwater or flowing rivers and streams.

The number of wild lovebirds is particularly stable in Africa, however, the peach-faced lovebird is often targeted by illegal trappers and hunters.

6. Feeding is a ritual in itself

As a way of strengthening the bond between two lovebirds, breeding pairs feed each other after long periods apart, or in stressful situations. In the wild, they feed on native figs, insects, seeds, and berries.

Peach-faced lovebirds are very social, and they tend to fly around in flocks of between five and twenty brightly colored birds. When grass seeds start to ripen, you can expect to find flocks of up to 100 as they whizz and chirp through the sky, returning to the group to feast on the seeds.

7. The peach lovebird can fly at speeds of 58 km/hr 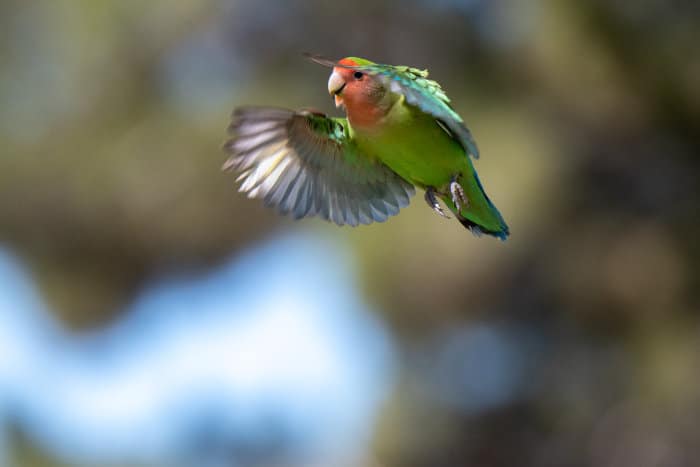 Flying is the main means of movement for these tiny creatures. Their wingspans range from 98 mm to 106 mm, with females having marginally longer wings than males.

The long flight hauls include periods in which the birds glide through the air. Squawking sounds accompany the gliding and is a positive expression amongst the flock.

When embarking on short-distance journeys, the lovebirds rely on their feet to do the heavy lifting. This tends to give them the appearance of a waddling duck.

They’ll sidle sideways too, and even use their claw-like feet to climb vertically up trees or walls. Flapping their wings gives them an extra boost of mobility.

8. Their mating rituals are as unique as their monogamous bond

Wild lovebird breeding is seasonal, opposed to captive species breeding yearly. This suggests that these intelligent creatures will only expend reproductive energy when conditions are favorable and the season allows.

Females are the deciding factor when it comes to mating. When she feels the time is right, she’ll ruffle her feathers as an indication of being ready to breed.

When the male gets the go-ahead, he’ll start the courtship, which mainly involves bobbing his head – this is a similar movement to the one used when feeding each other.

Upon approaching the female, the male will cautiously creep towards her in a sideways fashion. If she’s not impressed, she’ll appear aggressive, which causes the male to approach from the other side. This motion is called witch sliding.

And in true lovebird fashion, the male will nestle alongside the female and give her a head scratch. Scratching happens near and around the beak or on the beak itself.

9. In the wild, the peach-face lovebird is a nest thief 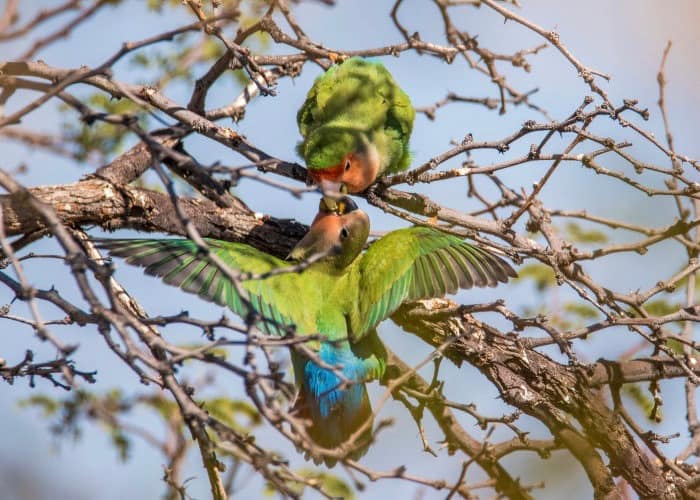 It’s not uncommon for a pair of lovebirds to reside in a large communal nest of sociable weavers as well as the white-browed sparrow-weavers.

However, it’s unknown how exactly the peach lovebirds come to acquire these nests. Researchers aren’t sure if it is the lovebird that forces the weavers out of the nests, or if they simply use vacated nests.

When it comes to assembling their own nests, the male and female work together to construct a nest in the shape of a deep cut.

To gather the resources needed for building nests, the birds will strip dry bark from trees into uniform pieces. Instead of simply carrying the bark back in its beak, the lovebirds will tuck the bark under their rump and into their feathers.

Leaves and grass will accompany the bark in making nests.

During the breeding season, the female spends most of her time in the nest laying eggs every other day. On average a rosy-faced lovebird lays four to six eggs and incubates them for 23 days.

10. When they’re not in their natural habitat, they build nests in holes

Given how popular the peach-faced lovebird is as a pet, it’s only natural that the species has spread across the world.

Lovebirds in Arizona gravitate towards cacti, where they’ll hollow out a section and use the plant as a nest. City-dwelling lovebirds do the same in trees or crevices in a building. 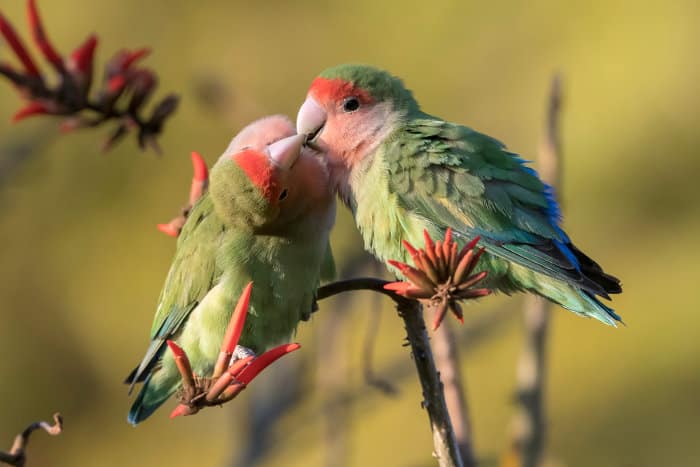 Although these birds are affectionate with their partners, it’s not uncommon for the birds to display aggression. The peach-faced sub-species are the feistiest of all nine species.

Being territorial, the lovebirds don’t get along well with other bird species.

Within their own kind, mating seasons leave many of the birds aggressive due to jealousy and hormones.

These peach-faced lovebird facts show us that no matter how small a creature may be, they are still as spectacular as any other large animal found in Africa.

Known for its affectionate nature towards its partner, the lovebird truly deserves the title it holds.

Calling Angola to South Africa home, you have the chance to spy upon these friendly birds by partaking in a safari experience in wild Africa. You can find plenty of safari deals that provide you with the opportunity to see not only lovebirds but elephants, lions, cheetahs, and giraffes.