The top three of the biggest land mammals on earth live in the African savanna. Can you guess what they are? From lanky necked giraffes to clumsy river horses, a number of incredible giant animals roam the African plains.

Large and bulky usually evokes images of clumsy and slow. Grazing animals are sometimes perceived to lack intelligence. But these giant animal facts will surprise you.

Find out which of these gigantic creatures has the biggest brain, who’s the boss, and who has a tongue five times longer than yours! 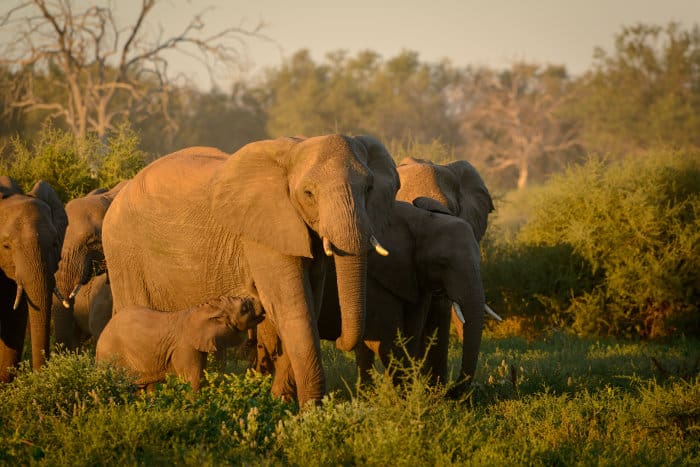 These gigantic animals reach a staggering shoulder height of between 2.4 – 3.9 meters and weigh up to 6 tonnes!

They’re very social and highly intelligent creatures and the herds average anywhere between 8 to 100 elephants. However, the biggest recorded herd is 500 elephants. That is a whole lot of collective tons.

Savanna elephants are not all brawn and no brain. In fact, they boast an enormous brain that can weigh up to 5.4 kg. The claim that an elephant never forgets anything is understandable, considering how much storage space they have.

Growing a 90 kg and almost a meter tall baby is no easy feat. Bush elephants have the longest gestation period of any land mammal at 22 months. The calf stays with its mother for around 16 years, nursing for up to 6 of those. What kind of superpowers are in that milk?

Wondering where to see African bush elephants in the wild? These amazing giants are widely dispersed throughout Africa. The best place to spot them is in savanna regions of Sub-Saharan Africa. For guaranteed sightings head to Hwange National Park, where about 50 000 elephants roam the grass plains. 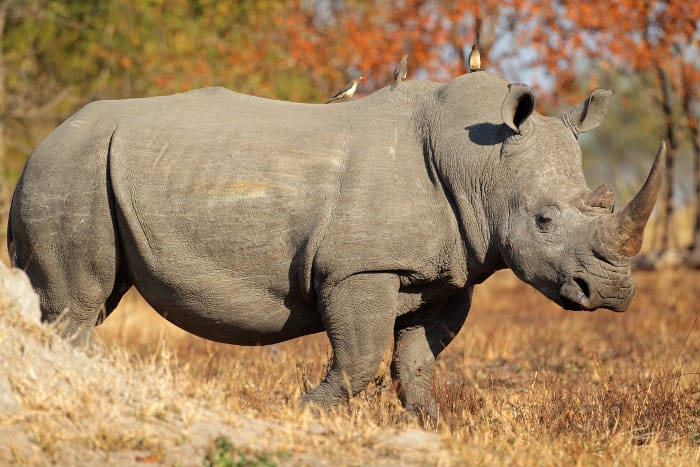 Also known as the square-lipped rhino, the white rhino is the larger of the two African species. And they are the second-largest land mammal after elephants.

Males can weigh up to 2000 kg and their head is considerably bigger than the black rhino. Because the white rhino grazes off the ground, it has large and strong neck muscles.

These huge animals have two horns, an unfortunate target of poachers, that can grow up to 1.5 meters long. The horns function to protect and defend themselves and their calves.

Wondering where to see white rhinos in the wild? Keep in mind that the population numbers are quickly diminishing as rhinos are one of the most threatened species. There are only 2 northern white rhinos left and they are heavily protected at Ol Pejeta Conservancy in Kenya.

However, the southern white rhino’s numbers have recovered with around 20 000 existing in protected areas and game reserves. 98% of the population lives in South Africa, Namibia, Zimbabwe, and Kenya.

Head out on a safari in one of these countries and hopefully, you’ll glimpse these almost extinct giant animals. 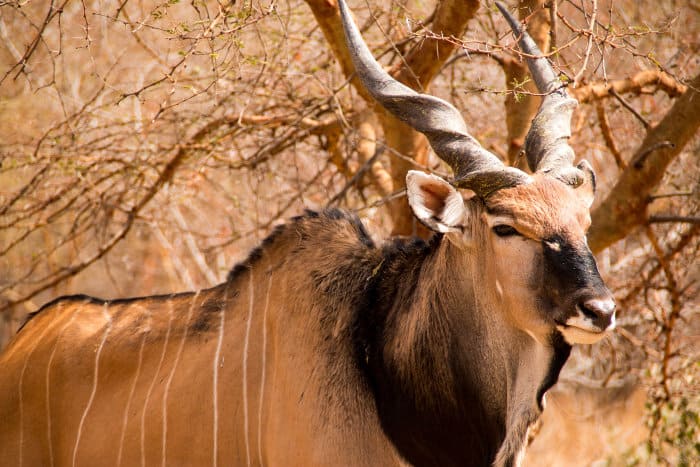 The giant eland, although bigger than the common eland, gets its name from its horns rather than its body. The spiral v-shaped horns can be up to 123 cm long. An impressive horn size to match an impressive body. It is the largest antelope in the world, standing 130 – 180 cm at shoulder height and weighing up to 1000 kg.

Leaping skillfully is something usually equated with graceful gazelles. But don’t let the eland’s bulk fool you. They can clear an impressive height of almost 2 meters. This is probably because they can reach a speed of 70 km/h – a speedy runup for a massive jump.

These antelopes have a unique clicking sound to their step. If you listen carefully, you might hear an eland before you see it. This comes from their hooves splaying apart and clicking back together under the animal’s considerable weight.

If seeing the common eland is on the agenda, Kruger National Park or Kgalagadi Transfrontier Park are your best bets. 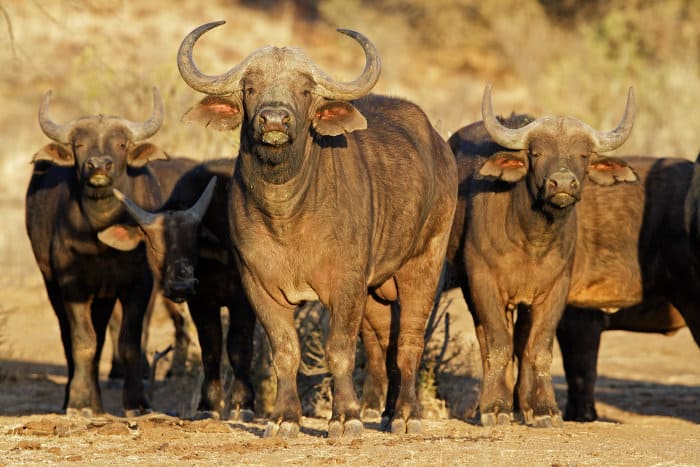 Here’s a riddle for you: what has horns shaped like a question mark, is four times stronger than an ox, and is notoriously grumpy? Our next oversized animal, the Cape buffalo, who is a temperamental tank of pure muscle and a no-nonsense mentality.

Could it be short-bovine-syndrome behind the grumpy attitude? Cape buffalos aren’t very tall, standing between 97 to 170 cm. However, their robust and stocky bodies pack some heavy muscle, weighing between 425 and 870 kg.

Hanging out in massive herds is advantageous for protection against predators. Buffalos tend to stand their ground in the face of danger. They form circles around vulnerable herd members when a predator is lurking, creating a barrier with menacing horns faced outwards. They commonly attack and seriously injure lions.

Basically, they’re bosses. Which is also the name for the portion of the horn directly above the head. As the buffalo ages, this part (the boss) becomes harder. The older the buffalo, the more of a boss he is.

Wondering where to see Cape buffalo in the wild? These giant animals are highly prevalent in Sub-Saharan Africa. You have a good chance of spotting them in national parks that are home to the big 5. 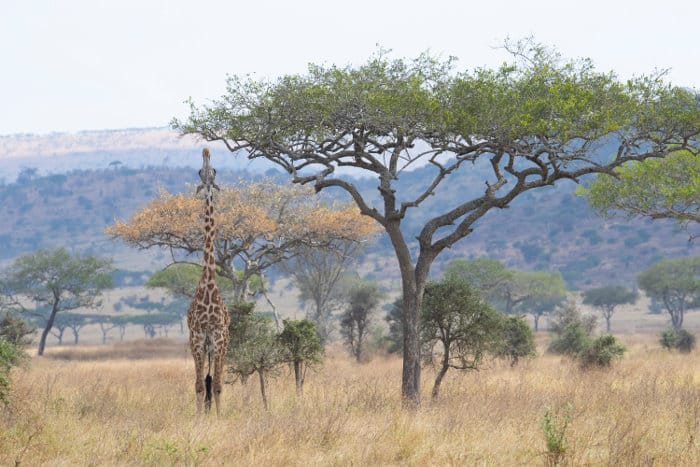 Giraffes look like the gods turned a child’s drawing into a giant animal that actually exists. They are awesome. They’re also the tallest terrestrial animals and can reach an unbelievable height of 5.5 meters!

Everything about a giraffe is long. Their legs are the size of a tall human, at around 180 cm. Their long necks are beneficial for spotting predators and reaching yummy acacia leaves. And their 40 – 50 cm tongues are up to 5 times longer than the average human tongue.

Even though they’re so tall, giraffes only have 7 vertebrae in their necks, which are just a little too short to reach the ground. This makes drinking very awkward, as they have to spread their front legs to try and reach the ground. Luckily, giraffes get most of their water from juicy leaves.

Giraffes rarely lie down. They take quick standing naps for a couple of minutes and only sleep a maximum of 30 minutes in 24 hours. They even give birth standing up. This means that a calf enters into the world by way of a 1.5-meter drop to the ground. Quite an entrance.

Wondering where to see giraffes in the wild? They are very common in savanna areas throughout Sub-Saharan Africa. You’ll see them easily in any national park. Their height and abundant numbers make them easy to spot. 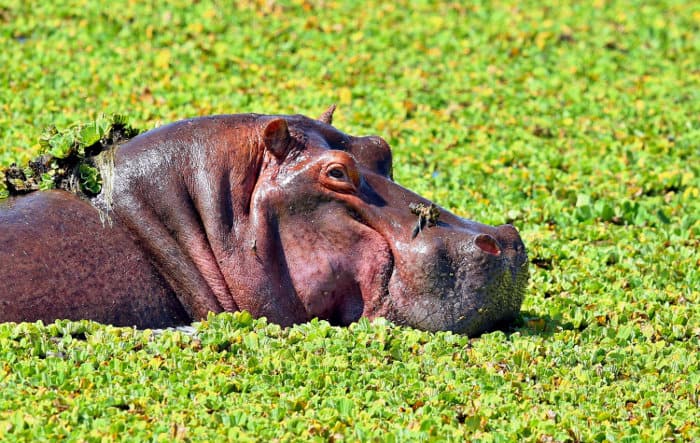 The African fable explains that the hippo had to make a deal with the gods. His creators were wary of allowing him to live in the water, certain that he’d gobble up all the fish with his enormous mouth and teeth.

So hippos now scatter their dung every day to show the gods that they did not consume any fish. Introducing the next gigantic creature, the semi-aquatic hippopotamus.

It seems unlikely that hippos can float, given that they’re the third-largest land mammal, weighing between 2200 – 3600 kg. Well, they can’t! They actually walk or stand on underwater surfaces.

They can hold their breath for up to 7 minutes but peek their nostrils above water every 3 – 5 minutes to breathe. They do this even when they’re sleeping. Fascinatingly, hippos can close their nostrils and this means that the bulky 45 kg calves can suckle underwater.

The name hippopotamus translates from ancient Greek to ‘river horse’, which is apt considering they spend most of their time in the water. However, they usually come out of the water to graze for a couple of hours in the night. They can cover up to 10 km of grassland while munching grass.

Despite their short, stocky legs and bulky weight, hippos are fast! They can reach speeds of up to 30 km/h on land.

Wondering where to see hippos in the wild? They live in Sub-Saharan Africa in areas with a lot of water. Keep your eyes peeled when you pass watering holes on a safari. Frustratingly, it’s common to see only a hippo’s nostrils and ears poking out above the water.

Are there any giant animals in Africa that you think should be on this list? Maybe it lives in the forest, and not the savanna plains, or it’s just the most giant of its kind.

Let us know and we’ll do our best to add it to our fascinating list of giant animals!