African predators are truly beautiful to behold. Nature lovers from all over the world regularly flock to destinations in Africa, hoping for a glimpse of these marvels of nature on a safari drive.

The very lucky get to see wild animals that hunt, hopefully just as they take down their prey.

There are several species of big cats and dog families roaming the savannah and veld. As prey becomes their means to survival, the mythical ‘circle of life’ essentially gets to play out in real-time.

Which of these predatory animals is the most efficient hunter? Which predators hunt alone and which do their deeds in packs?

Let’s look at the big African predators with the highest hunting success rates. 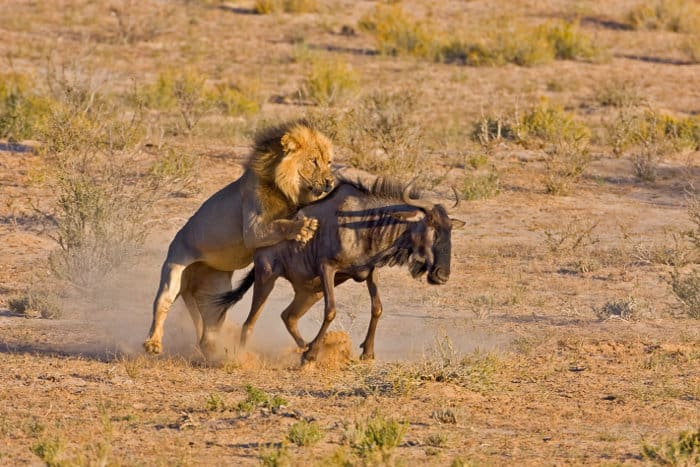 A lion’s reputation as an apex predator may well be a little undeserved. While you would certainly lose a fight, they are not prolific hunters at all, compared to some others on the continent.

Lions hunting solo have dismal success rates at under 19%. In a pack – led by females – they’re slightly more successful at up to 25% success.

They’re probably on the wrong side of the curve because they’re notoriously lazy, can’t really run over long distances, and prefer to steal others’ fruits of their labor.

Yes, lions will muscle in and steal the prey of other predators. Stalking and ambushing is so much work. 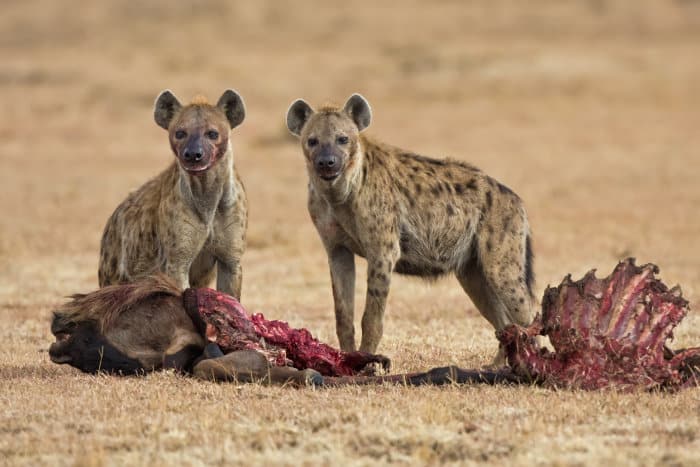 Let’s continue with an unexpected and somewhat disputed contender – the hyena. Many will argue that hyenas are scavengers and not hunter animals.

They are only partly right. Hyenas are indeed opportunistic scavengers, but also very efficient killers when they need to be.

They can acquire up to 75% of their own food by hunting and killing it. In the Kruger National Park, rangers estimate that at least half their food is self-acquired. So let’s not disregard this fearsome-looking powerhouse.

It’s estimated that they have a 33% success rate at whatever they target – which isn’t bad at all! For some context, compare that to the elusive leopard. 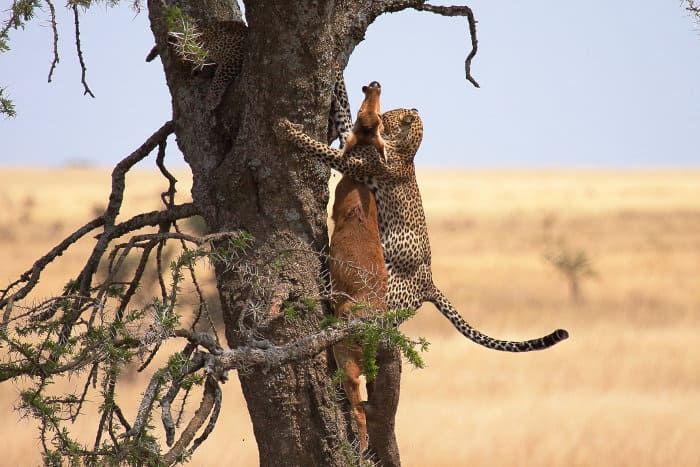 The gorgeous leopard is a bashful creature, and you’d be lucky to see one on a safari. But it’s a very decent hunter. Kill rates of up to 38% are reported, especially in Southern Africa.

The leopard may not look as intimidating as the lion, but it is extremely powerful – pound for pound the strongest predator on the continent.

It drags prey up to half its weight into the branches of a tree to avoid having it nabbed by scavengers and thieves like the lion. 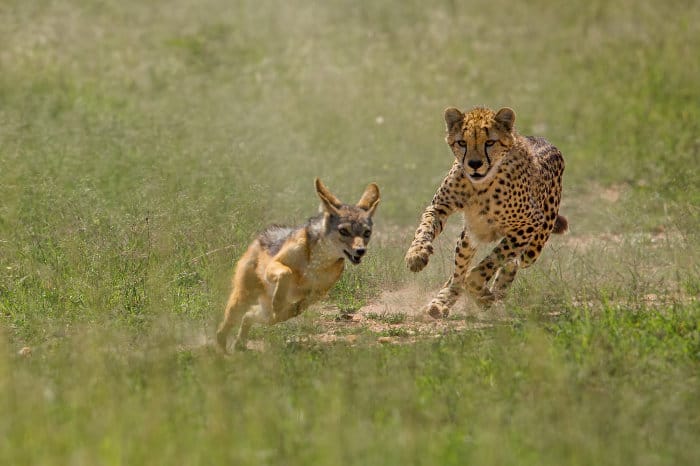 The cheetah challenges the lion as the most famous of the African big cat predators.

The reason is the incredible grace with which the speedy cheetah chases down its target. Many nature documentaries have shown us the amazing action in slow motion as cheetahs clock up to 75 mph on camera.

Not surprisingly, they can boast up to a 58% success rate on their hunts. It’s the lucky prey that gets away, as cheetahs are fast, but only over relatively short distances.

When they are successful, cheetahs are too exhausted to defend their catch from the ever-present opportunists like our friend the lion, jackals, and hyenas. 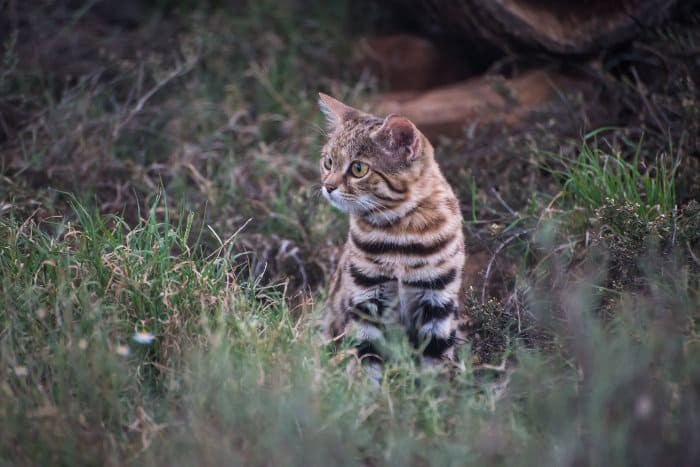 It’s a less well-known cat and the smallest of all the wild cats in Africa. Yet the black-footed cat is a very efficient killer.

At just 17 inches in body length, it may not look formidable. But small rodents, birds and rabbits will attest that this kitty can kill with the best of them, with around 60% success rate.

More than that, they actually are clinical when they’re on a roll. They can make 10-15 kills every night. Technically, that might make them the most successful predator of the lot. Call them cute at your peril. 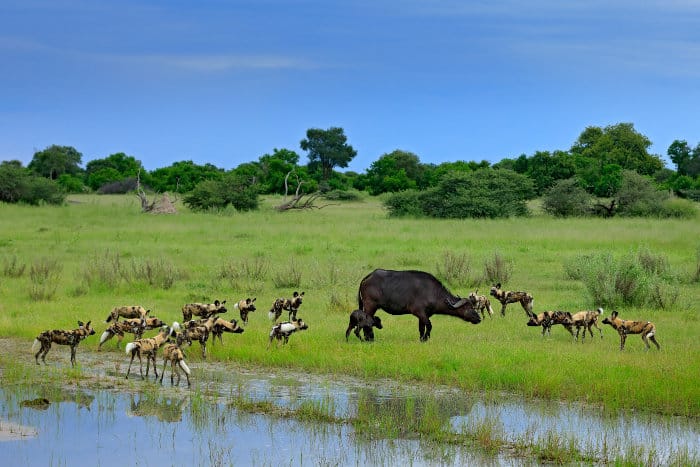 Which brings us to the big dog… literally. African wild dogs are hugely talented when it comes to hunting prey, and undoubtedly this list’s best hunting animals.

If a pack targets a prey, there’s an 85% chance they’ll bring it down successfully. As a pack, they’re not only overwhelming in numbers, but also very persistent.

Sadly for them, they lose a lot of their spoils to the ever-present threat of other carnivores. African wild dogs are also endangered, which is a shame.

They are definitely contenders for #1 predator in the world – at least, in terms of efficiency.

A Word On African Bird Predators 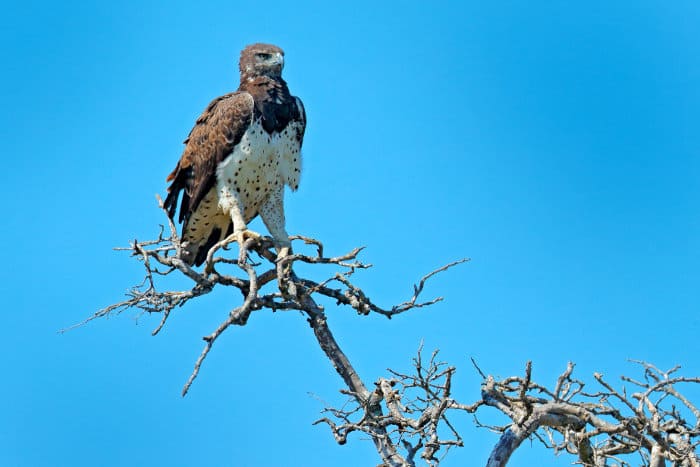 It’s worth noting that birds of prey are also very good at hunting. Here’s a short list of birds that challenge for the title of Africa’s best predator.

Spotting the Best Predators in the Wild

For the most part, these are the best hunters in Africa. It’s not all success, though, as clearly the hunt is only half the game.

In many cases, it also becomes a question of an animal predator holding onto the kill as bigger or more numerous predators are always looking to steal the prize.

It’s also clear that those who hunt in packs tend to do a lot better than solo artists. And in many cases, mothers with young will go for easier prey to feed their litters.

In the end, it’s not a race, but African predators can be deadly, and even at low success rates, they are truly beautiful to see. Make a point of trying to spot them on your next safari trip. 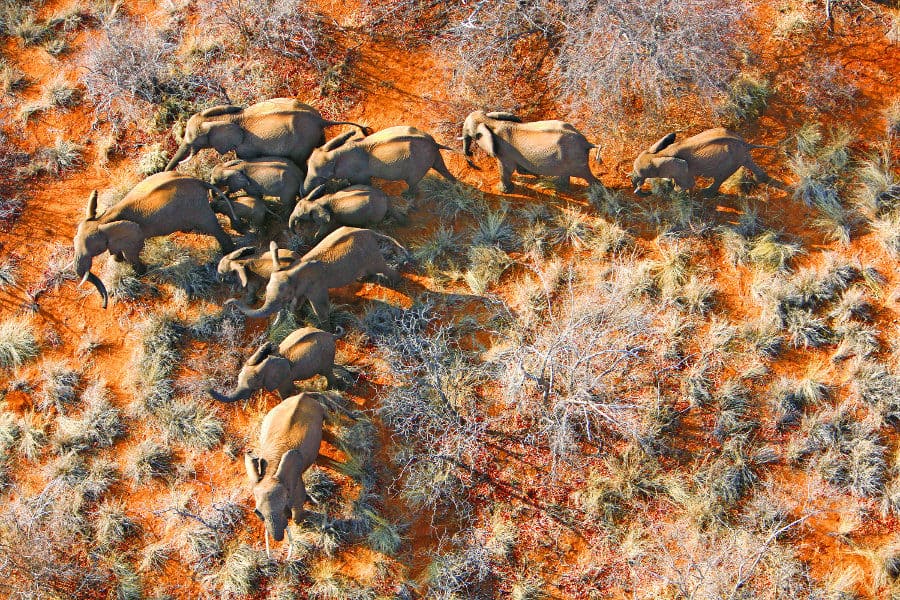 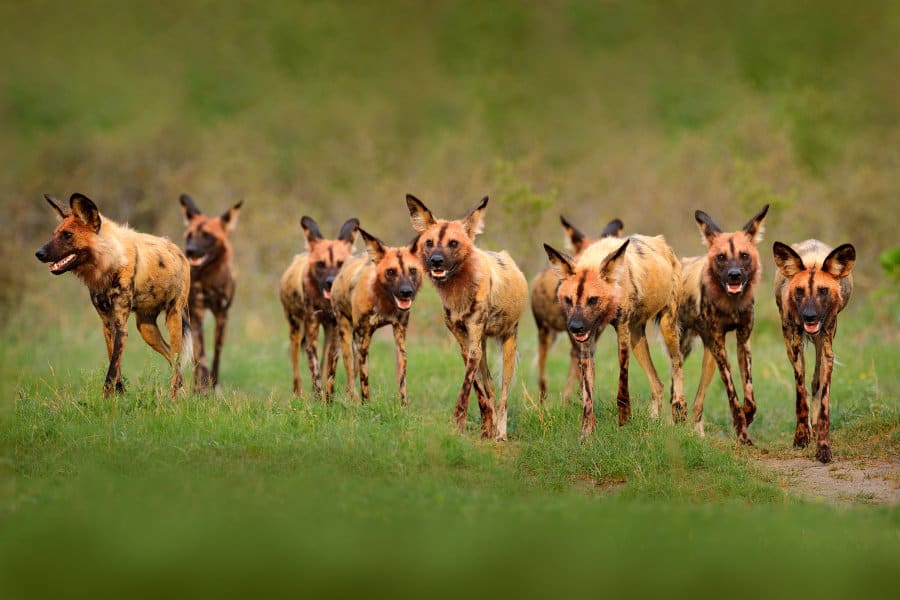 3 thoughts on “What African predators have the highest hunting success rate?”