The “Big Cats” are a fascinating group of animals inhabiting most continents. From the slender cheetah, with its record-breaking speeds, to the powerful bite of the jaguar, it’s no surprise that most of these felines are apex predators.

However, not all cats are created equally, as different environments require specific adaptations to excel.

But what are the differences between a cheetah and a jaguar?

Although cheetahs and jaguars may look similar at first glance, there are many differences between these two big cat species.

Some of them include their physical appearance, taxonomy, distribution and habitat preferences, hunting and feeding strategies, prey items, and social structure.

Besides, cheetahs and jaguars live on other sides of the planet.

Where does either species occur? How can you tell them apart if you put the two together? What prey species do they target, and what conservation efforts are in place to protect them?

Read on to find out all about cheetah vs jaguar, plus other intriguing facts about these stunning felines.

A Summary of the Difference Between a Cheetah and Jaguar 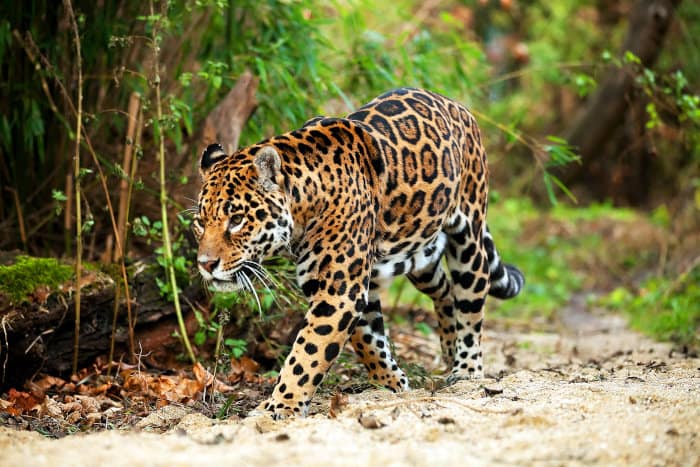 While cheetahs and jaguars bear several similarities, they have some striking differences too.

The table summarizes some of the most poignant differences between cheetahs (Acinonyx jubatus) and jaguars (Panthera onca).

Cheetah vs. Jaguar: Distribution and Habitat

Historically, cheetahs and jaguars inhabited many regions across the globe.

The distribution and habitat of cheetahs 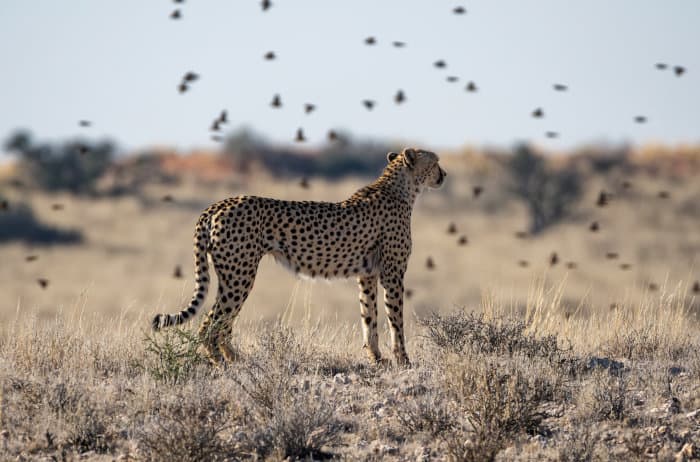 In the past, cheetahs were relatively widespread. Estimates from 1900 suggest that roughly 100 000 cheetahs inhabited continental Africa into the Middle East and Arabian Peninsula, stretching to India.

Since the early 1900s nevertheless, cheetah populations have decreased and are now mostly restricted to parts of Africa and Iran in the Middle East.

There are smaller cheetah populations in Cameroon, the Central African Republic, Chad, Congo, Ethiopia, Mali, Niger, Somalia, South Africa, and Zambia. But they are fragmented and often isolated.

The Asian cheetah populations are almost extinct, and only Iran has a relatively large population (dozens).

The distribution and habitat of jaguars 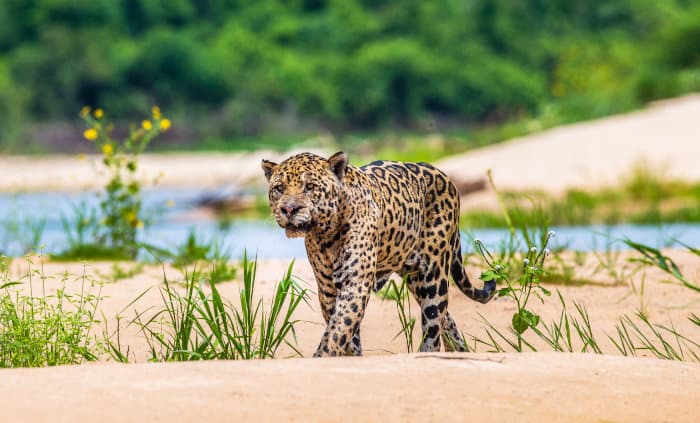 Jaguars are mainly restricted to central and south America. However, their historic ranges stretched from the Grand Canyon in the US to as far south as Patagonia.

Roughly 89% of current jaguar populations reside in the Amazon River basin. Approximately 50% of jaguars live in Brazil, while most of the others live in Bolivia, Colombia, Ecuador, French Guiana, Guyana, Peru, Suriname, and Venezuela.

Within this rainforest dwelling, jaguars mostly occur in tropical low-lying habitats and woodlands. They are adept at swimming and usually live close to water bodies, including lakes, rivers, swamps and wetlands.

During their historical range, jaguars occupied various other habitats, including the open plains of the southwestern USA and the Argentinian scrub grasslands.

Cheetahs and jaguars seem to resemble one another. They are both large cats with yellow coats and “spots.”

That being said, upon closer inspection the physical differences between them become evident. 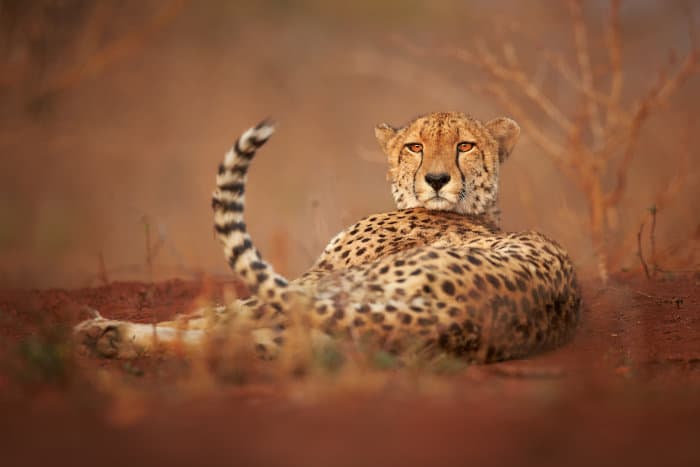 A cheetah is a medium to large cat with a slim build. It has long legs and a long tail compared to the rest of its body.

Cheetahs’ coat color varies, but they are usually a light yellow. Cheetahs are covered in black spots that form unique patterns on their bodies.

Cheetahs have white bellies. Their tails usually have black rings with a white tuft on the tip.

The king cheetah is a genetic mutation that occasionally occurs in the southern African cheetah, where the spots join together to make large “blotches” on the coat.

The most diagnostic feature of a cheetah is the stripe running from the corner of each eye down to the outside of the mouth.

These stripes are called “tear marks” (or malar stripes). They act like sunglasses by absorbing sunlight.

Males are slightly larger than females.

Cheetahs’ claws are only semi-retractable, which increases traction and stability as they run (like cleats/studs on a shoe). 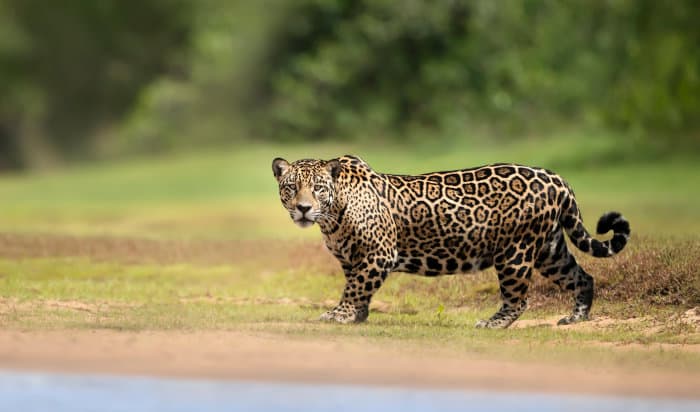 A jaguar is a large cat with a stocky, muscular build. Jaguars’ coats range in color from orange to tan.

One of the most diagnostic features of a jaguar is that the black spots on their coats are in a rosette shape (one spot in the middle surrounded by several smaller spots). These rosettes form unique patterns.

On top of their back, from roughly the middle, their spots merge to form a stripe. Jaguars also have white bellies. And they sometimes come in completely black or brown (however, their spots are still evident).

An animal’s taxonomy is where it fits in its family tree. From taxonomy, we see where different species diverged from a common ancestor.

Cheetahs and jaguars are closely related until they split into different subfamilies (Felinae and Pantherinae).

Cheetahs are the only species in the Acinonyx genus, while Panthera includes 5 living species.

Aside from their different physical features, cheetahs and jaguars have distinct hunting techniques, prey species, behavior, and niches they occupy.

Cheetah vs. jaguar, the differences in feeding and hunting

Cheetahs and jaguars employ contrasting hunting techniques depending on what prey they target, the area they are in, and their numbers. 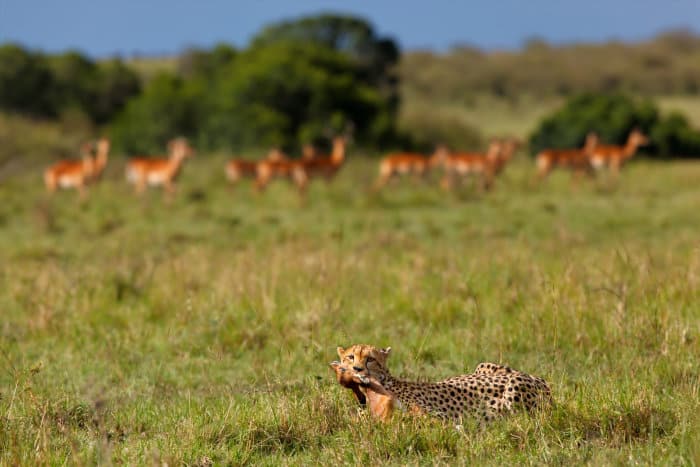 From a relative standstill, cheetahs reach speeds of between 60 and 70 mph in roughly 3 seconds. However, they maintain this speed for only around 20-30 seconds.

When hunting, cheetah stalk their prey, inching forward until they are as close as possible (usually within 328 ft/100 m). Once in range, the cheetah bursts out of hiding and gives chase.

Depending on the prey, a cheetah uses its front legs to trip the animals (by swiping at the back legs). Alternatively, it may bite the animal’s neck as it runs (especially small mammals like scrub hares).

Cheetahs will pounce onto the quarry for larger prey and try to drag it down. Nevertheless, they lack the strength and weight to do so safely.

When hunting in coalitions, cheetahs target larger animals and work together similarly to lions.

One individual bites down on the throat to suffocate the animal while the others help drag it to the ground.

Cheetahs usually hunt during the day. This strategy helps them avoid lions, hyenas, and other nocturnal predators who steal cheetah kills.

Hunting during the day helps cheetahs see where they are running (critical for avoiding injuries).

Once they’ve killed something, they need to eat as quickly as possible as other predators steal their kills. 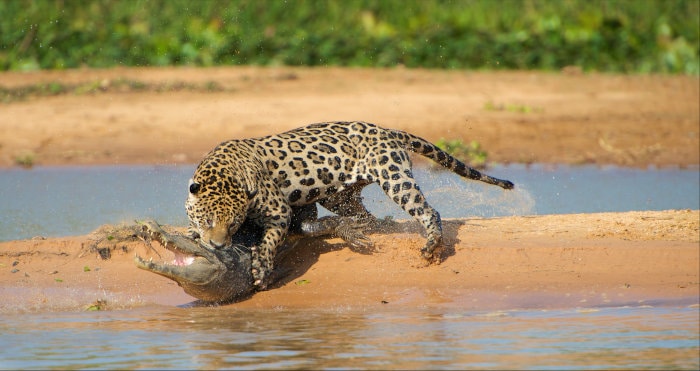 Jaguars are not as fast as cheetahs and don’t run as far. They sneak up on their quarry and pounce, using their powerful jaws to crush the animal’s skull/bite into the spinal cord. Jaguars hunt various prey and often pounce on reptiles or fish in water bodies.

Jaguars are solitary hunters, so they need to overpower whatever they catch. Fortunately, with their incredible bite force, they can kill animals up to four times their weight.

Jaguars are some of the largest predators in their region, so once they make a kill, they can leisurely eat as they please.

Jaguars are primarily nocturnal but may hunt during the day.

Some of these quarries include:

Jaguars are opportunistic hunters, eating a wider range of prey (around 85 species) than cheetahs. 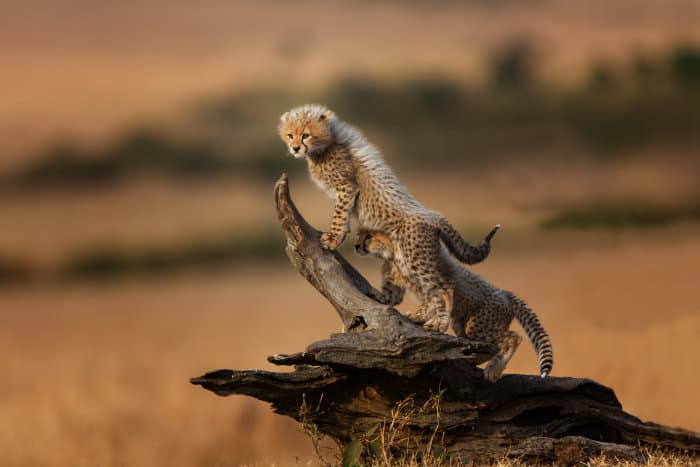 Jaguars are solitary cats. They only come together for breeding, and males have home ranges that encompass several females. After mating, males leave.

Breeding frequency varies according to the area, with cats in the tropics not following a fixed time frame.

After 100 days of gestation, female jaguars give birth to between 1 and 4 cubs. The cubs remain with the mom for up to 2 years before moving off on their own, where they’ll reach sexual maturity after 3 to 4 years.

Female cheetahs are usually solitary with large home ranges (especially in areas where their food migrates).

Males are commonly solitary as well but may form small coalitions. These coalitions are normally between litter mates (brothers) and comprise 2 to 3 cats.

Males might establish small territories to attract mates. Both sexes mate with several partners in a season, and cheetah cubs born in the same litter could have different “fathers.”

There are typically 3 cubs in a litter, which remain with their mother for a year and a half.

Once they leave their mom, the young cheetahs stay together for up to 6 additional months before splitting up. Cheetahs begin reproducing at 20 months.

Cheetah vs. Jaguar: Conservation and Threats

While jaguars are near threatened, cheetah populations are vulnerable and are of greater concern.

Both species suffer from habitat loss due to human activities. There are roughly 7100 wild cheetahs and around 173 000 wild jaguars.

Farming, housing, infrastructure, and other competition for land continue to push these big cats into smaller areas.

Aside from habitat loss, cheetahs and jaguars suffer from poaching and being shot for animal control (when they attack livestock).

Humans are the most significant threat to both species. Cheetahs are also vulnerable to lions and hyenas, while jaguars might be at risk of large anacondas and caimans.

Discover These Amazing Cats in Their Natural Habitats 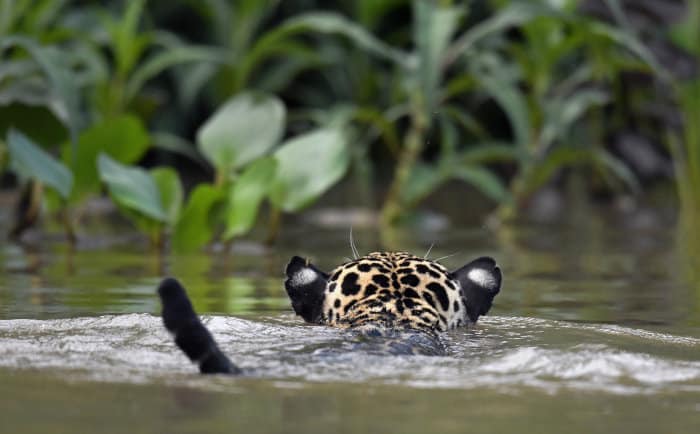 As the cheetah and jaguar populations continue to decline, you may wonder how you can help. Many conservation bodies accept volunteers and donations toward protecting these animals, so your support is vital.

Alternatively, booking a safari to appreciate these incredible cats in their natural habitats is another fantastic way to support the national parks that protect them. 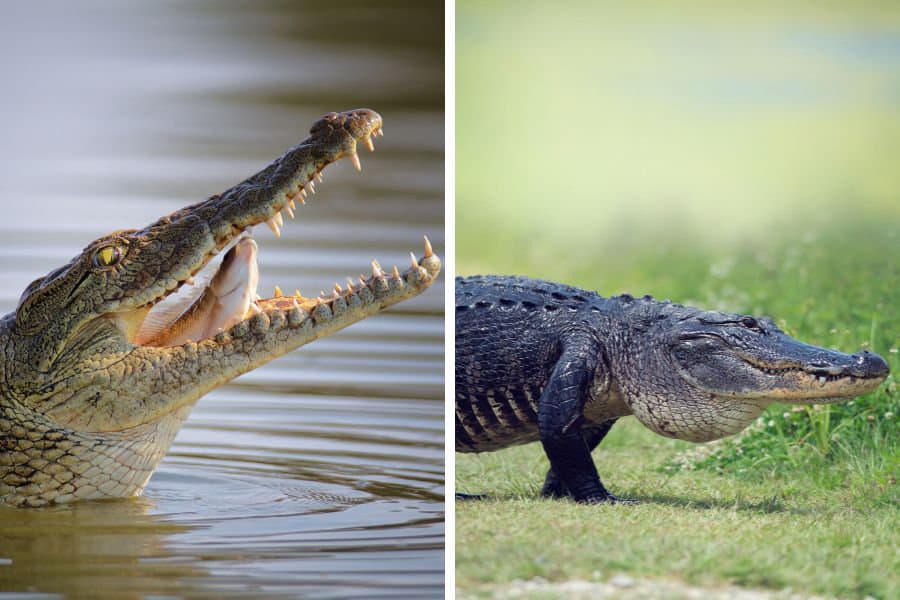 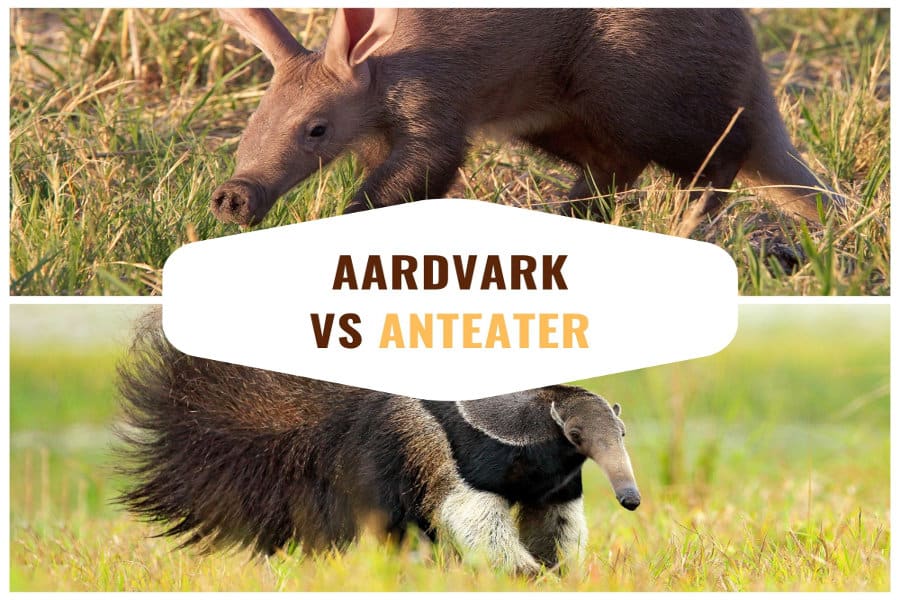 1 thought on “Cheetah vs jaguar: what’s the difference between them?”