Small is beautiful in Africa. From nimble klipspringer to adorable dik-dik, this article guides you through the 12 smallest antelope species in Africa.

These tiny 12 are not to be hunted. While they are advertised as hunting trophies, these small antelope should be celebrated for their evolutionary brilliance.

Each has a special adaption to help it thrive on the plains. And each can take the breath away when encountered on a safari. 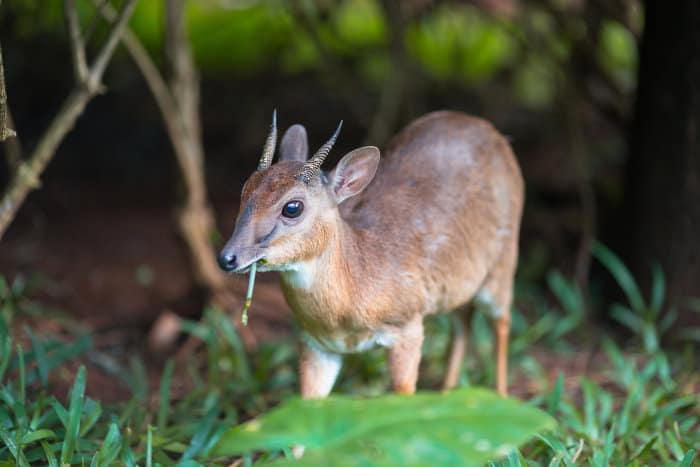 Native to West Africa, the royal antelope is officially the world’s smallest antelope. Measuring just 25 centimetres at the shoulder, this nocturnal creature weighs less than 3 kg.

Royal antelope are defenceless against predators. However, they are incredibly alert and will flee to cover whenever anything comes close. Consequently, researchers know very little about their behaviour.

You can see them in the lowland forests of Ghana, Guinea and Côte d’Ivoire.

It is from the same family as the royal antelope and suni, but has a different habitat. This antelope has adapted to feed on a huge variety of vegetation, including fungus, grass, herbs, buds, and crops.

Misguidedly thought by many to be Africa’s smallest antelope, dik-dik are a magnificent example of evolution. They are very different to the rest of Africa’s antelope, not least for their unusual name.

They get their name from their call. Dik-dik is onomatopoeia for the whistling warning sound shouted by the females. It is a high-pitched shrill a little like dik-dik, dik-dik.

Dik-dik don’t have herds. They are monogamous and mate for life. One grazes while the other keeps watch. Then they switch. Sometimes these 4 kg antelope have to move territories because the grass is too high for them to see over.

You can read more in this article – what is a dik-dik? 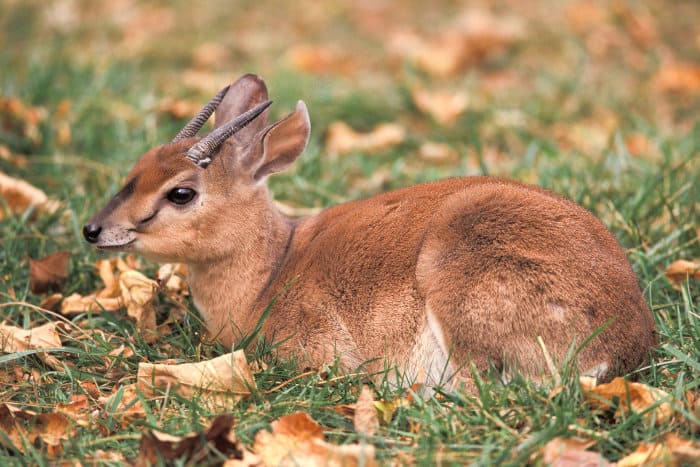 Suni are so small that their most common predators are birds of prey and snakes. Even cheetah don’t find suni worth the effort.

Suni can be spotted all over the eastern side of Sub-Saharan Africa, from Kenya down to Kwazulu-Natal in South Africa. Despite their abundance they are difficult to see.

Suni are so well camouflaged they practically blend into the grass. When a predator comes after them they don’t even move.

Instead, this small antelope will wait until the predator is on top of them, before springing out and sprinting off into the bush. 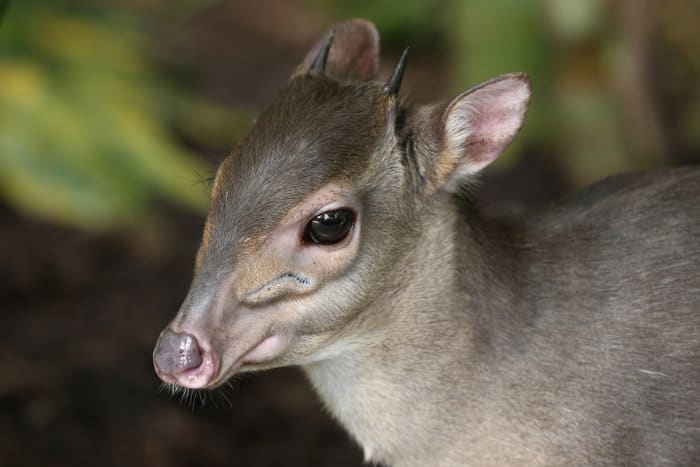 Blue duiker are one of 23 duiker subspecies. All duikers are elusive, incredibly shy, and live in areas with dense cover. They are also very difficult to see on a safari.

The smallest of the species is the blue duiker, a rainforest specialist found throughout the Congo Basin.

Mature blue duiker can weigh around 7 kg and are only 35 centimetres in height. Given their preference for thick forest they are very difficult to find. 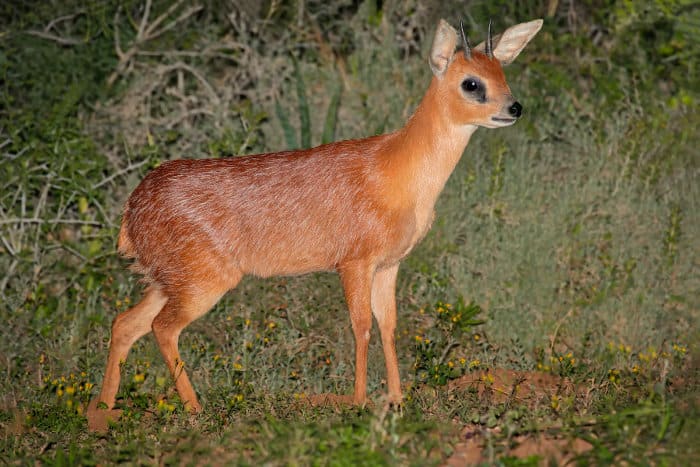 This tiny antelope is native to the Cape. Visually it is easily confused with steenbok, but is smaller and lighter (8-12 kg), and has an entirely different diet.

There are only six floral kingdoms on the entire planet. South Africa’s Cape is one of these, home to an extraordinary type of vegetation known as fynbos. Cape grysbok have evolved to harvest this native fynbos.

Shy and solitary, this 8-11 kg antelope is similar to its Cape cousin. The difference is diet and habitat, with the Sharpe’s grysbok occurring through East Africa and southeastern Africa.

Although solitary, both grysbok species use a communal toilet. Special gland secretions mark out a toilet in the wild and urinating elsewhere is a social faux pas for these small antelope! 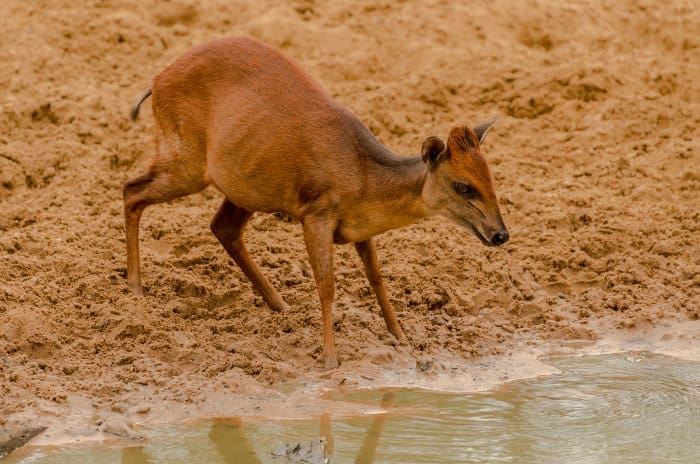 Thanks to strikingly red coats this small antelope is easy to identify when spotted. They weigh 9-11 kg and prefer woodland edges and gallery forests, where there is less cover for predators.

Only around 40,000 of these animals remain and their population is declining. Other than in the Greater Kruger area there are no significant herds or populations. Yet these small antelope can be hunted legally for trophies. 🙁 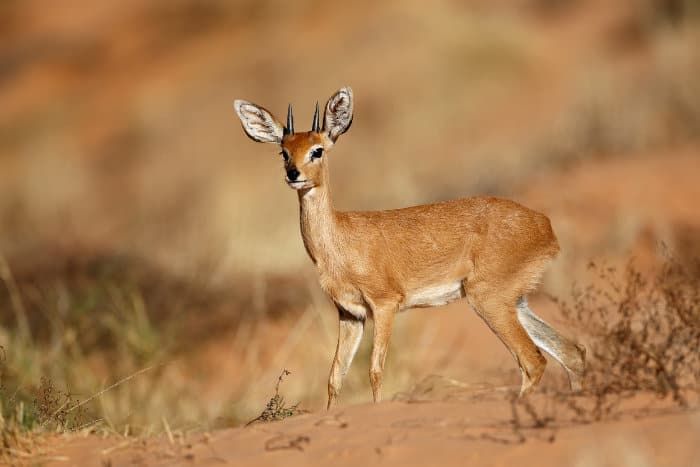 Physically similar to grysbok, steenbok have enormous ears but relatively short horns (only males have them). Fleet-footed and incredibly agile, this is the smallest antelope that exclusively browses for its food.

Rather than grass, steenbok diet on flowers, fruits, and the young leaves of plants. On a safari it can be very difficult to distinguish steenbok from grysbok. Rather than appearance, check what the antelope is eating.

And here is a little tip from our safari partner. When frightened by noise (such as a safari vehicle), grysbok will run away to a safe distance then look back. Steenbok will look first and then run. 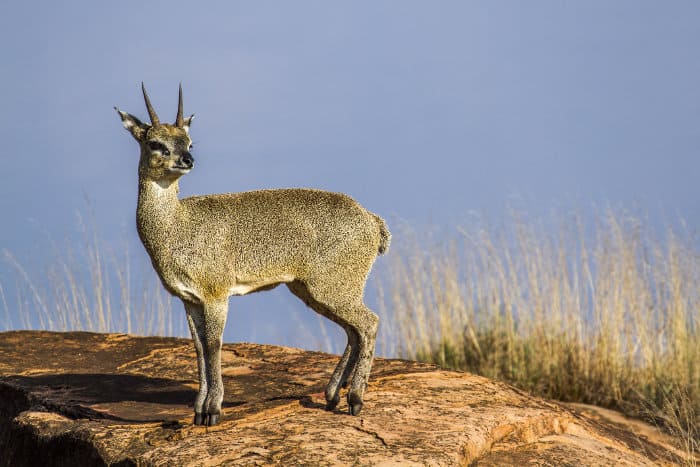 Klipspringer are incredible. They live on rocky outcrops across Southern Africa and perform a poetic rock jumping dance.

Predators can see klipspringer, but they can’t catch them. Why? Well, the klipspringer can jump around steep rocky landscapes on their tiptoes.

They are remarkable athletes, able to jump between rocky perches at high speed to evade hunters. 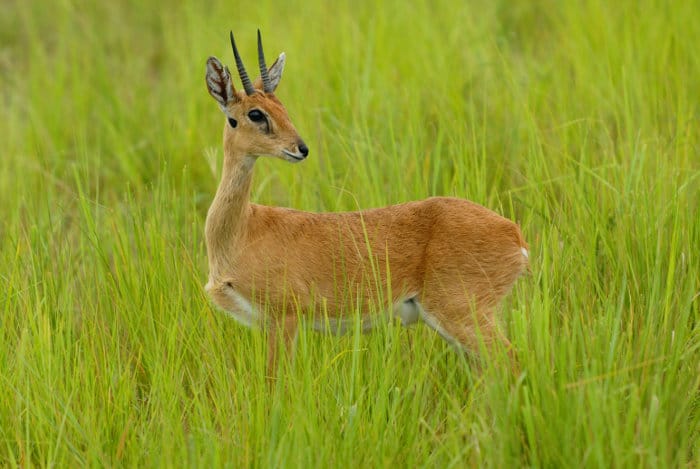 While there are many different duiker, there is only one oribi. The only one of its genus, oribi are widespread across Southern, Eastern and Western Africa. Basically, everywhere in Sub-Saharan Africa that isn’t the Congo Basin.

It is small and slender and uses agility to evade predators. Often you see oribi grazing with Thomson’s gazelle and topi, where there are more vigilant eyes and ears. 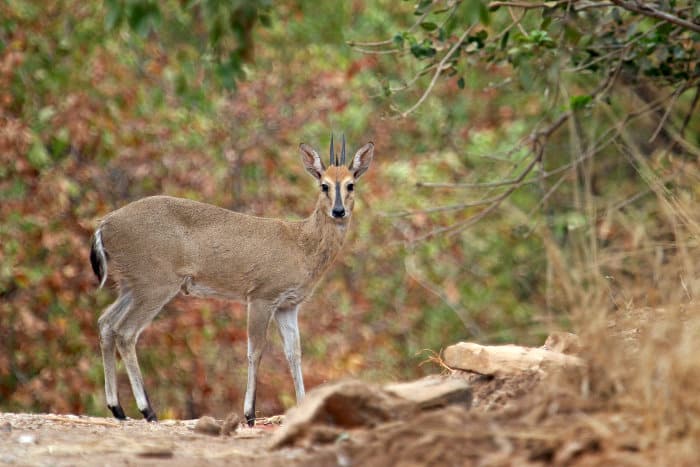 Looking a lot like Bambi, common duiker occupy savannahs all over Sub-Saharan Africa. They can grow to 50 centimetres in height and weigh 12-25 kilograms when fully grown.

Unlike most antelope the common duiker is omnivorous. Along with leaves and fruits they will dig into insects, frogs and small birds.

There are 14 subspecies from Angola to Kenya, each with its own uniquely coloured coat. 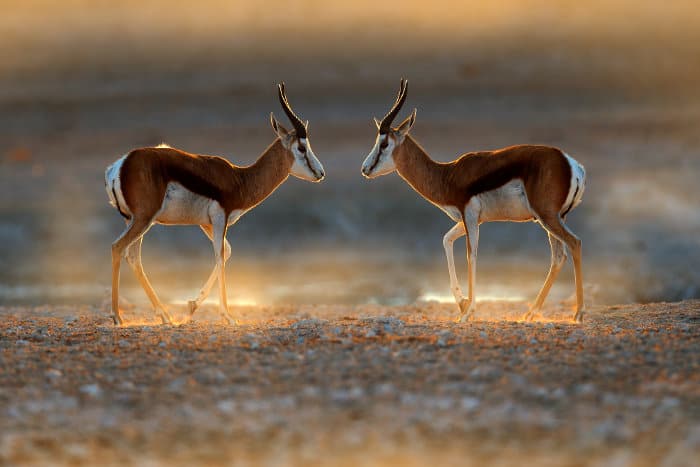 The smallest antelope species are often the hardest to find. They are shy and secretive, usually hiding in the grass and staying well clear of vehicles and people.

These are the sights for safari connoisseurs, the people who are re-visiting Africa to discover more of its wildlife. Yet these are just 12 among many.

Wherever you go, an antelope encounter can connect you with your wild side. Which is exactly what Africa is all about.