Spotted animals are the ultimate sights on an African safari. And Africa really does have the world’s most magnificent spotted animals!

From leopards to beetles, servals to bush snakes, this article celebrates Africa’s spotted animals. It will take you from tiny ladybug to the incredible predators of the cat family! 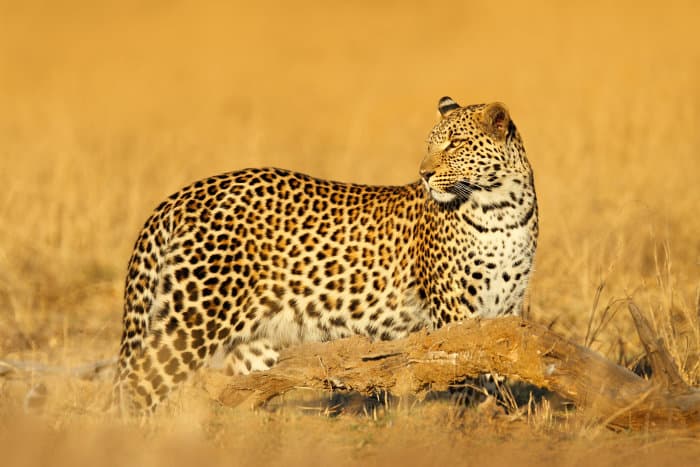 Of all the carnivores in Africa none fires the imagination more than these magnificent cats.

Their eyes are definitely the eyes of a predator, sending chilling ripples up your spine – they’re not pussycats, these spotted animals!

Not often an easy cat to spot (excuse the pun), the leopard is a solitary cat, associating only with a mate or with cubs. It’s secretive and nocturnal.

These spotted animals hunt using a stalk-and-pounce strategy. A courting leopard pair will stay together a few days to mate frequently. Cubs are born blind and moved by their mother every few days. After developing their spots, the cubs will stay with mum for up to two years.

A Surprisingly Spotted Animal – the Giraffe 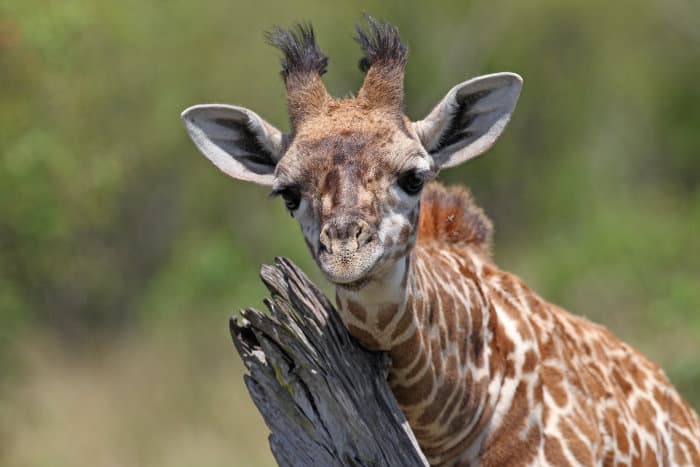 Everyone loves to notice the diurnal giraffe. They are not territorial but have overlapping home ranges. Mature bulls are usually solitary, only associating with the herd when the females are ready for mating.

There are eight known sub-species of giraffe in Africa – with some very dramatic pattern variations such as the reticulated giraffe of East Africa. Every single giraffe is a spotted animal, although you may think their spots are more like patches.

They scratch themselves by rubbing against trees. These spotted animals like to browse, but you might even get to see a giraffe chewing bones and taking in some necessary minerals.

You might even see them licking the soil on occasion to get calcium and phosphorous. Giraffes give birth while standing up with bent back legs and the calf is hidden for the first three weeks. 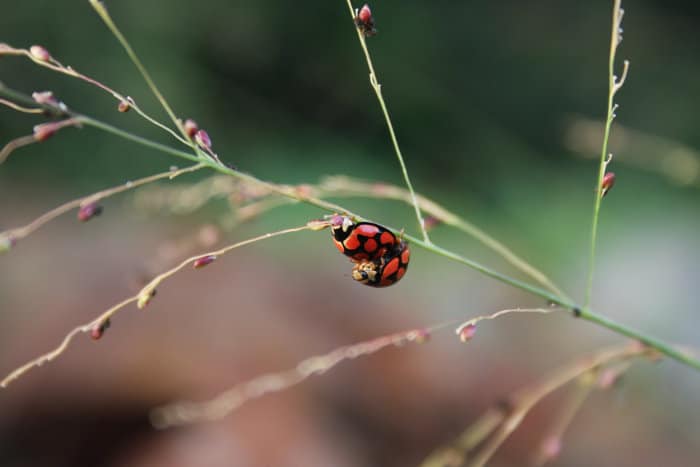 Ladybirds come in many colours, some with spots and others with stripes. Most are carnivorous, feeding on smaller insects like aphids.

Ladybirds are extremely hard to photograph as the light shines on their smooth surfaces and reflects back as glare. Sometimes when you are just about to take that all-crucial shot, they spread their little wings and off they go!

The ladybird beetle is a fabulous little spotted animal and the smallest African animal on this list. 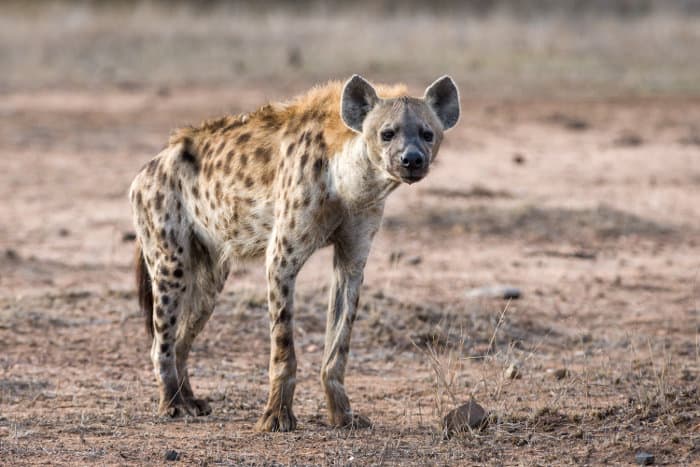 Spotted hyena clans will often have well over 20 members and the females are more dominant in the clan. They are territorial and they kill up to 75% of their own food. Instead of stalking prey they rely on numbers to complete a successful kill.

Cubs are born with teeth and are inherently aggressive, fighting with others from the start. Take note because not all hyenas are spotted animals. You can also find brown hyenas and striped hyenas in Africa.

A Spotted Bird – The Pearl-Spotted Owlet 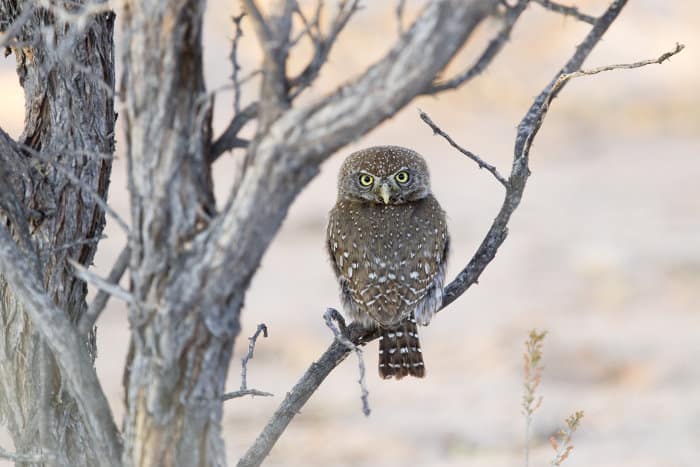 This is such a pretty spotted bird and it sounds incredible, with its distinctive call of hoo-hoo-hoo-hoo-hoo, teeu-teeu-teeu.

Pearl-spotted owlets make their natural home in tree holes and woodpecker nests. The male brings the food to the chicks, but it will be the female who actually feeds the chicks.

This is the smallest southern African owl, with eye spots at the back of its head which confuses other birds. Mainly nocturnal, they can be seen on tree branches during the day.

They mostly hunt small rodents, lizards, insects, and other birds. If you see this spotted animal it might wag its tail from side to side – that means it’s disturbed. 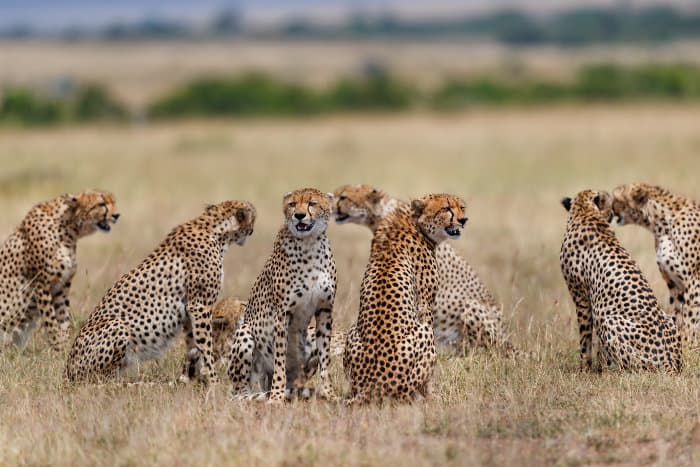 These magnificent spotted cats are the only members of the cat family unable to retract their claws.

Cheetahs also differ from the king of the beasts in that they don’t roar. They have high pitched calls and purr like domestic cats during friendly encounters and when suckling their cubs.

The adult female is a solitary spotted cat unless she is with her cubs. They mark their territories with their urine. The female will urinate near the male to attract it as a mate, and then initiate the mating by crouching in front of him.

Cheetahs have magnificent spotted skins whereas leopards, although they look similar, actually have rosette-type skins. The awesome cheetah is the fastest land animal on earth. 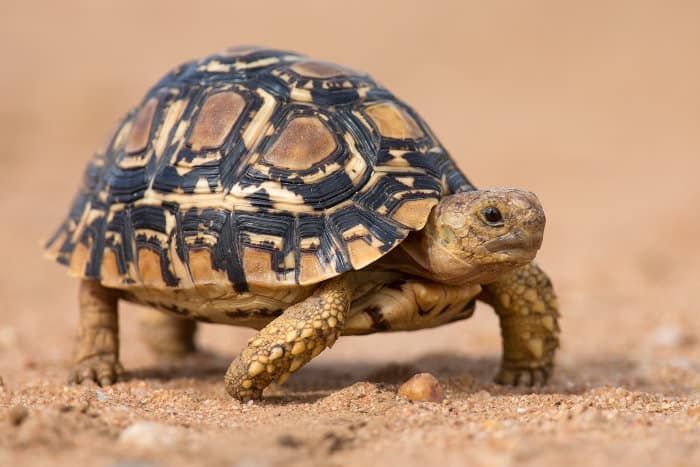 The pardalis word comes from Latin and means “spotted”. This refers to the patterns on the tortoise’s shell.

Baby leopard tortoises have yellow carapaces with black blotches or spots but they tend to fade as the tortoise gets older. They eat a wide variety of plants and grasses, even eating hyena faeces and gnawing bones for calcium.

The male chases and butts the female into sexual submission and must fight a male rival aggressively. 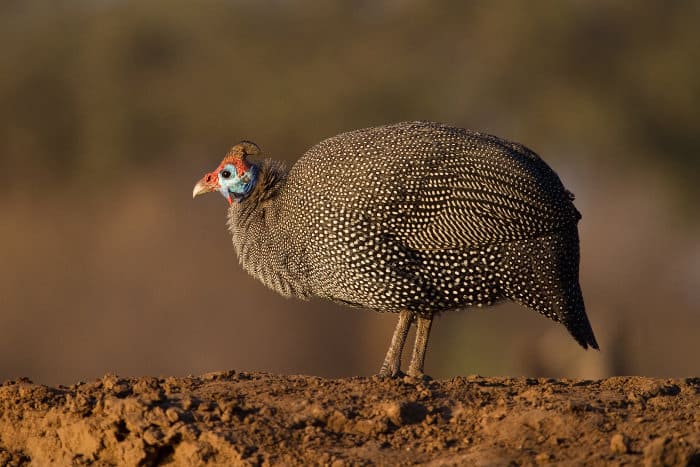 Popular folklore suggests that if you find spotted feathers in the veld, you will feel lucky and should take the feathers home with you.

These terrestrial spotted animals are unique to Africa. They have a raucous, constant chatter and call loudly when they approach water. All the adults in the flock help to rear and protect the chicks.

Find out more about the helmeted guineafowl. 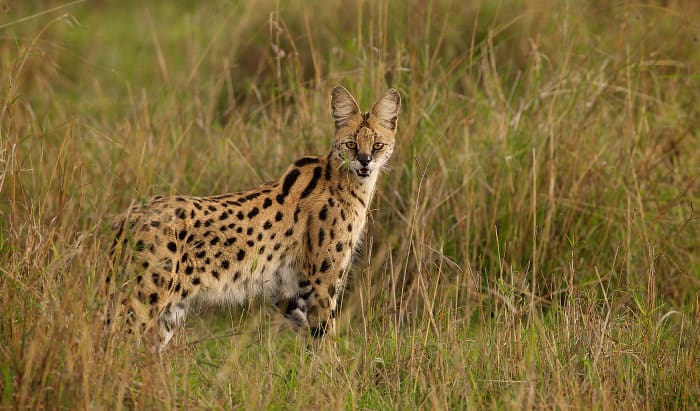 These slender cats have golden-brown coats featuring black spots on their flanks and tails. They have extraordinarily long legs for their body size, and small, long heads.

The serval uses prominent markings on its ears to communicate with other servals. They eat rodents, birds, frogs, rats, and small reptiles, even fish occasionally.

These spotted animals are elusive, shy and mostly nocturnal, becoming active at dawn and dusk.

This wonderful little creature has a few different vocalisations which include growling, snarling, spitting and purring, and when defending themselves, they arch their backs and growl loudly. 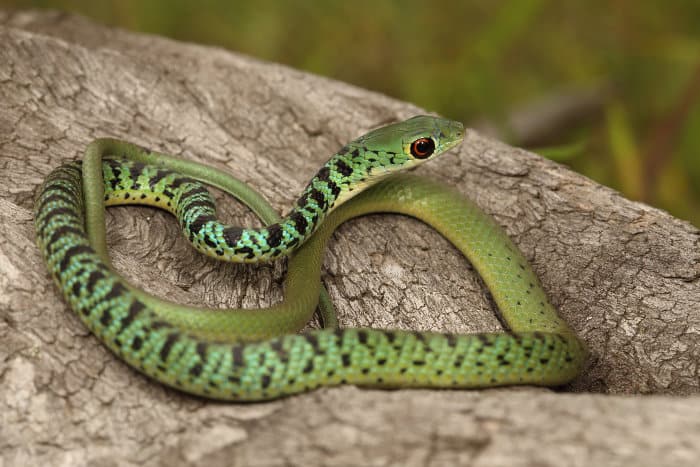 This spotted bush snake is very slender with a flat, distinct head. Its body is bright green to olive in colour and it has dark spots on the bars of its fore body – the spots become grey-bronze towards the rear.

Its head varies from being green to blue-green. The female will lay anything from 3 to 12 eggs in the middle of summertime and it feeds on small animals such as chameleons, geckos, and tree frogs. Don’t try and make this bush snake a pet as it won’t feed in captivity. And why would you want to make a wild animal a pet?

Spot the Spotted Animals on Safari

There you have it, the spotted animal varieties of Africa, created like that for a reason.

For some it is to attract mates, for others, it is to protect themselves. Other animals use their spots to hide from their predators. Often the behaviour associated with each animal compliments their colourings.

So indulge in your wild side on an Africa safari, where you listen to the chorus of heart-stirring sounds and vistas of the wild bush of Africa – it’s romance, grandeur, and spotted animals you won’t find anywhere else!

Curious about our featured image? It brings to light a very unusual spotted animal: a polka-dotted zebra foal, to be exact! This unique specimen likely has a genetic mutation called pseudomelanism.

Here’s some rare footage from Tira, the baby zebra with polka dots recently “spotted” in the Masai Mara (Kenya).

Frank Liu was searching for rhinos when he came across this eye-catching plains zebra. “At first glance he looked like a different species altogether,” Liu explained.

Antony Tira, a Maasai guide who first observed the foal, named it after his surname.

You can learn more about the polka-dotted zebra here.