Although many might think of Africa as a gigantic wildlife preserve, this perception is incorrect.

Numerous wild regions across Africa are only “pristine” because they are protected in national parks, which vary in size and what they aim to protect.

While many other protected areas (like nature reserves) exist, this article focuses specifically on national parks.

Large African national parks cover vast tracts of land (some bigger than many European countries), facilitating fauna and flora in their natural habitats.

But which are the largest national parks in Africa?

The largest national park in Africa is the Namib-Naukluft National Park in Namibia. At 19 216 square miles, the park is larger than Slovakia, and the state of Maryland.

The smallest of the ten largest national parks is 8 649 square miles, slightly smaller than New Jersey or Kosovo in Europe.

Even if the focus is on the ten largest parks, there are many more large parks in Africa.

Below you’ll discover the largest national parks within each African region, which countries they’re found in, what they are renowned for, plus other important information.

The Largest National Parks Across Africa 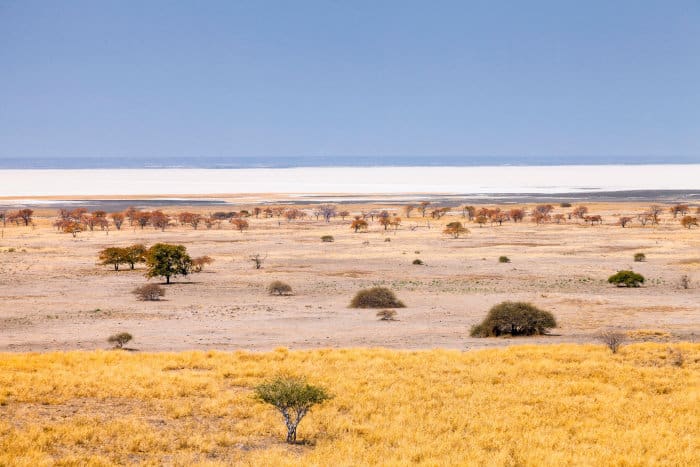 Africa is known and celebrated for its wildlife. However, this wildlife is constantly under threat from human expansion and resource requirements.

The only way to ensure that the magnificent fauna and flora of the continent remain for generations to come is through national parks.

National parks occur throughout all geographical regions of the African continent, and they are at the center of most countries’ conservation efforts.

Game parks come in various sizes and layouts, with various purposes and priority species. The most famous preserves are often mega parks.

Within the 54 African countries, over 200 national parks cover roughly 8.6% of the total African landmass.

The ten largest national parks in Africa (from the largest) are: 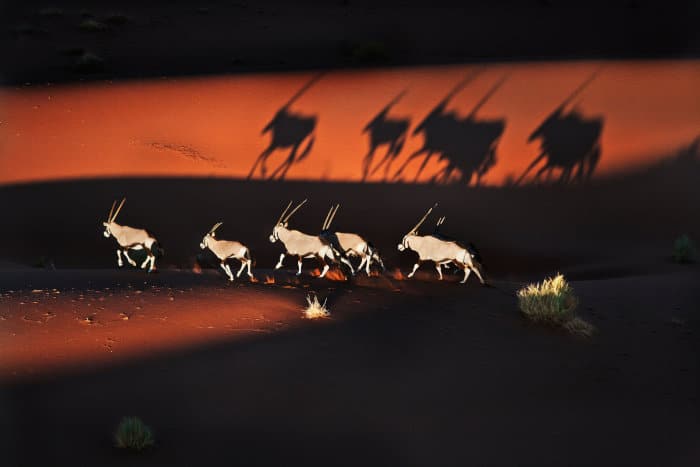 After its proclamation in 1907, the original purpose of the Namib-Naukluft National Park was to conserve the Hartmann’s mountain zebra population present.

Activities around the park include: 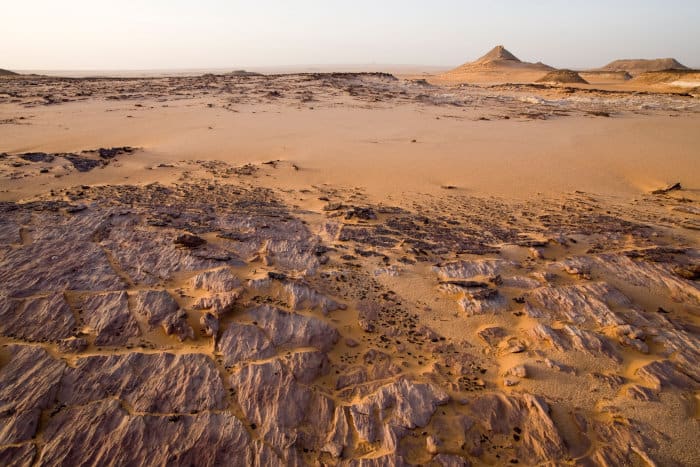 Proclaimed a National Park in 2007, the Gilf Kebir (or “the great barrier”) is a particularly arid area bordering the Great Sand Sea.

The national park encompasses a sandstone plateau that stands 984 feet above the desert. Other features are the silica glass fields, dunes (and valleys), and a meteor field.

The Gif Kebir is also home to caves containing paintings from prehistoric civilizations, suggesting that the area was once fertile. 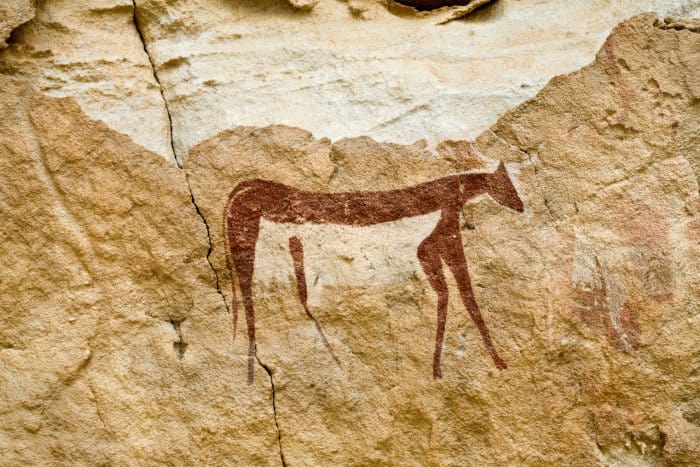 The most well-known cave is the Cave of the Swimmers, located in Wadi Sora.

Although vegetation and wildlife are sparse, visitors can find wild sheep (weedan), some reptiles, and bird species like Egyptian vultures, storks, and the white-crowned black wheatear.

When accessing these barren areas, you’ll need to go by camelback or 4×4 as this area is isolated. 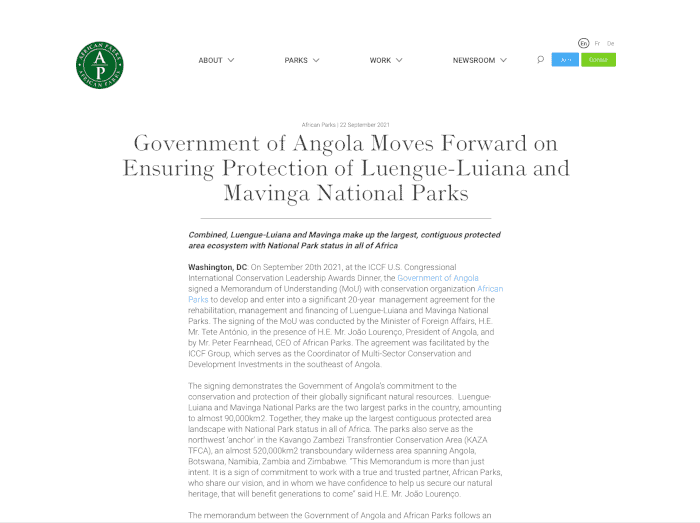 Although they are technically two separate parks, the Mavinga and the Luengue-Luiana National Parks create one contiguous protected area across Angola, Zambia, and Namibia (many bordering African national parks drop their fences to create a larger park).

The understanding between government authorities was mediated by African Parks, an NGO that assists governments in meeting their conservation goals by providing management, scientific, and other services.

The importance of “peace” parks and other joint operations is that it brings all the stakeholders around the same table to work together in conserving their precious natural heritage. The agreement was signed in 2021 and will run for 20 years before re-evaluation.

This area is rich in wildlife, including elephants, cheetah, hyena, hippopotamus, and many other game species.

The area is also typical of the savanna biome, with grasslands, and scattered trees, representing miombo woodland vegetation.

Several rivers pass through the region, including the Longa and Cuito rivers. The park is open to tourists, who can enjoy safaris, overnighting at surrounding lodges, and other activities. 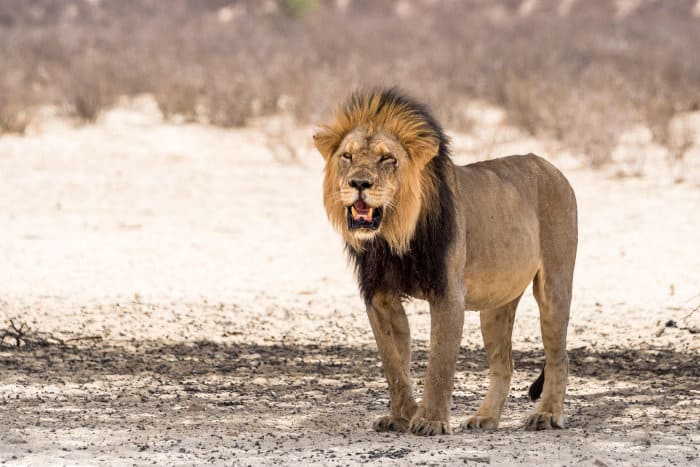 The Kgalagadi Transfrontier Park is another fantastic example of governments cooperating to improve the conservation of wildlife and vegetation across their borders.

Although the South African and Botswana governments signed the understanding in 1999, the park was only officially established in 2002.

This delay was due to the political change occurring in South Africa at the time.

Aside from the significant “peace” agreement between South Africa and Botswana, removing fencing between the pre-existing parks allowed wildlife to return to their ancient migration routes, which were disturbed when the parks were fenced off.

Peace parks like this one are sobering reminders that nature should abide by its course, even though humans draw lines and borders.

This park is also considered a wilderness park, and park authorities limit the number of visitors in the area to reduce human impacts.

The area is home to many species, including eland, gemsbok, hartebeest, springbok, black-maned Kalahari lion, brown hyena, and other wild cats.

There are several lodges and campsites in the Kgalagadi Transfrontier Park. 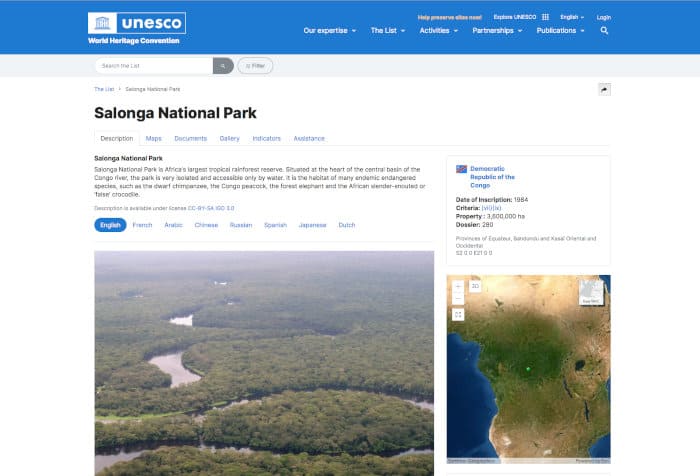 Located in the Democratic Republic of the Congo, the Salonga National Park is Africa’s largest tropical rainforest reserve. UNESCO recognizes it as a world heritage site, and it was established/proclaimed in 1970.

Due to the isolated nature of this National Park (you can only access it by the river), it acts as a core conservation area for the Congo Basin, an area rich in endemic species (plants and animals that only occur here).

The Salonga National Park is 13 900 square miles in size (36 000 km²) and represents a pristine tropical rainforest.

Some of the endangered species protected in this area include the African slender-snouted or ‘false’ crocodile, dwarf chimpanzees, the forest elephant, and the Congo peafowl.

An essential function that this national park (and other forested regions of this magnitude) provides is carbon sequestering. I.e., big forests take vast amounts of carbon dioxide from the air and “trap” (store) it in their trunks, leaves, roots, etc.

Due to its inaccessibility, human impacts on this forest are minimal, making it vitally important to preserve this habitat as much as possible.

This park is also home to pygmy tribes who have remained isolated from society.

This diversity is due to the park’s proximity to the ocean. Cooler temperatures result in higher rainfalls, and, therefore, more life is supported.

The most significant feature of this National Park is Mount Elba. This mountain stands at 4 708 feet, making it the second tallest in Egypt but far from the tallest in Africa.

The mountain aids in providing water to the area. Clouds accumulate around the peak, and condensation trickles down into the valleys.

Access to this national park is limited, and obtaining permission to enter the area is often quite challenging for visitors (there is a chance that you’ll have a police escort while there). 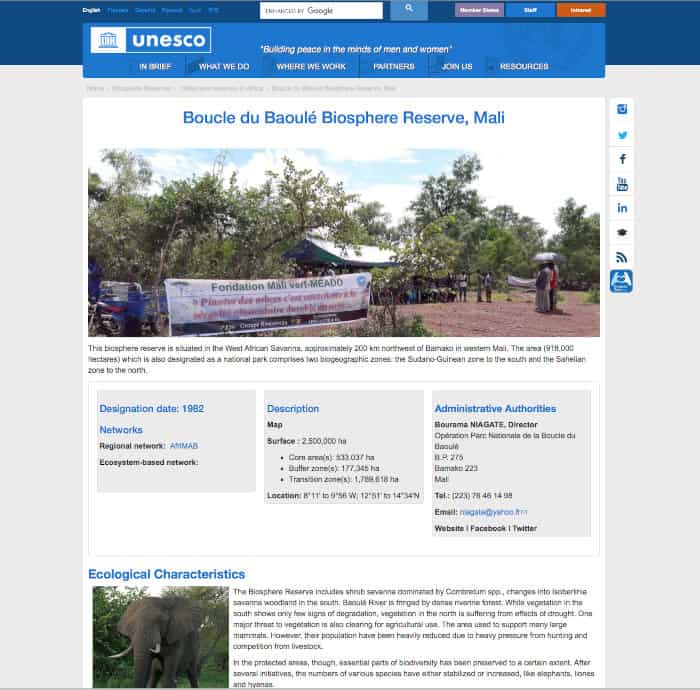 The national park was established in 1982 to alleviate the impact of drought conditions on the surrounding communities and wildlife.

An important thing to remember is that a biosphere reserve has three zones:

The purpose of these zones is to benefit local communities and wildlife simultaneously, which often results in compromises on both ends, providing unique challenges for park authorities.

However, the northern areas are impacted by drought and human activities, including clearing for agriculture. The extent of this clearing, and pressure from hunting, removed larger herbivores from the sector.

The unfortunate history of this park (like many others in Africa) is that the focus shifted away from wildlife management during the civil war in South Sudan. Poaching, fighting, burning, and other destruction resulted in a decline in flora and fauna.

However, as peace continues (since 2018) in the country, efforts are recentering on conservation.

NGOs like the Lion Recover Fund champion the reintroduction of charismatic “umbrella” species (like lions and elephants).

These organisations provide/find funding to help the park as a whole by working with local authorities. 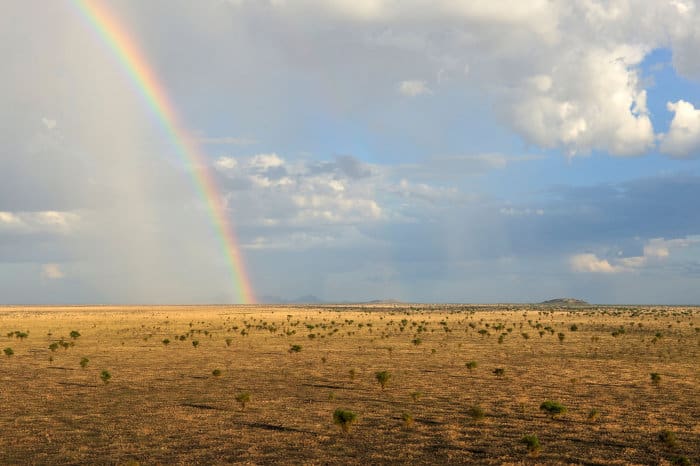 Many people are familiar with the wildebeest migrations through the Serengeti every year, but did you know that the topi (another interesting African antelope) also migrates?

During October, roughly two million ungulates migrate across South Sudan towards the White Nile, and researchers believe that the topi accounts for roughly 125 000 of the moving bodies.

While chasing after the rains, these antelope move through the Boma National Park. The majority of movement occurs around the Sudd wetland area.

Another fascinating species in this region is the Nubian giraffe, and with only a few hundred left in the world, they are worth looking after.

Visiting the park is tricky, and the peace is still newly won. If you intend to travel to South Sudan, you’ll need to inquire about the area’s safety before going.

As the country comes out of its war-torn past, the government looks to ecotourism as a potential revenue source to help them back onto their feet.

UNESCO has also considered the migratory route across Boma as a world heritage site. 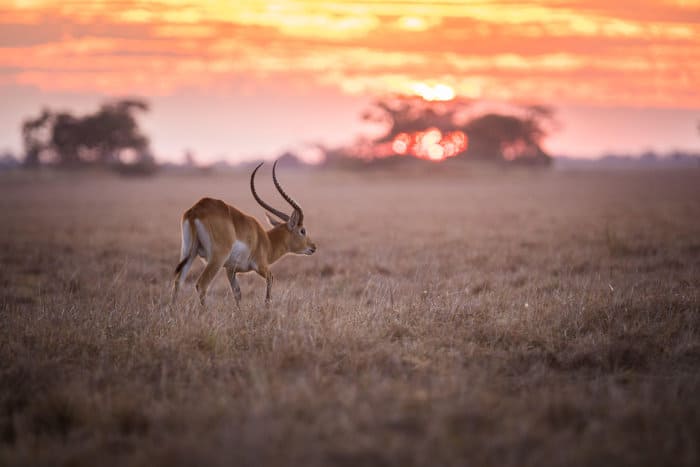 Kafue was originally established as a National Park as early as the 1950s. Although it is a large park with a lengthy heritage, it is another relatively unknown region.

This relative obscurity is probably a positive, as much of the national park remains less disturbed by human activities.

However, Kafue National Park has seen its share of visitors, and their contributions allow the park to continue upgrading its facilities.

Like many Southern African parks, Kafue National Park benefits from better political stability and decades of conservation efforts (the government’s buy-in to a national park plays a tremendous role in its longevity and quality).

The park’s positive attention means that the protection afforded to the plants and animals subsequently increased. A testament to good conservation at work.

Kafue National Park is home to diverse plant and animal life, including cheetah, lions, elephants, leopards, blue and yellow-backed duiker, and more ungulate species than anywhere else in southern Africa. There are over 500 bird species.

There are also several habitat types in the park, including Miombo woodlands (semi-deciduous woodland, with Brachystegia, Julbernardia, and Isoberlinia trees dominating), open savanna plains, and the Kafue River and riverine vegetation. 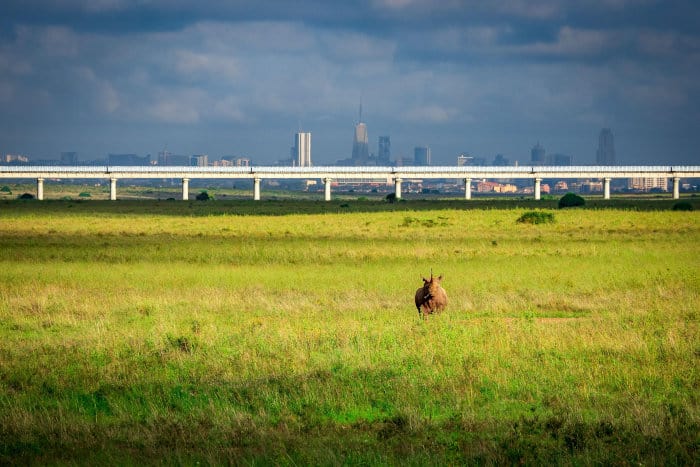 While most of the world would argue that bigger is always better, conservation in Africa is not always clear-cut.

While larger parks can be more resilient against disease and disaster, smaller parks should not be excluded too quickly.

Some smaller parks are perfectly sized for smaller management teams with lower budgets. These parks often also conserve a particular vegetation type or species that might not need much movement space.

Generally, smaller parks are closer to cities and allow more people to experience nature on their doorstep.

What is important is that there are enough smaller parks to create ecological corridors so that bees, birds, and smaller animals can still move from park to park.

Why Does Africa Need National Parks? 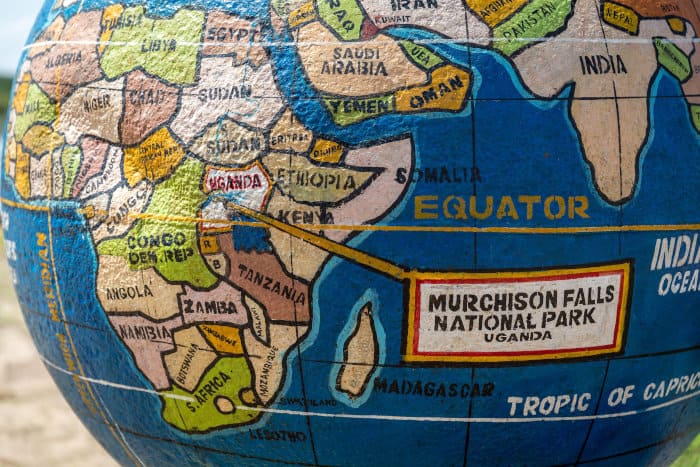 Unfortunately, in many regions of Africa, wildlife needs to provide some value to warrant keeping it.

Many communities bordering natural areas need the land to graze livestock, the timber to build homes, and the physical space.

To ensure a place for wildlife in an ever-modernizing Africa, governments set aside tracts of land that represent the vegetation or are important for a particular group of species.

Other times the area designated for national parks is “unusable” for farming or residential areas.

Whatever the reason, wildlife in national parks is afforded protection in most countries. As Africa continues to develop, national parks and other protected areas will become more critical.

Has something you’ve read resonated with you, and you want to find out how you can help the conservation efforts in Africa?

In that case, you can start by discovering safari options across the various national parks.

Many parks survive on ecotourism. Any support they receive is funneled back into conservation, protecting wildlife and their habitats for current and future generations. 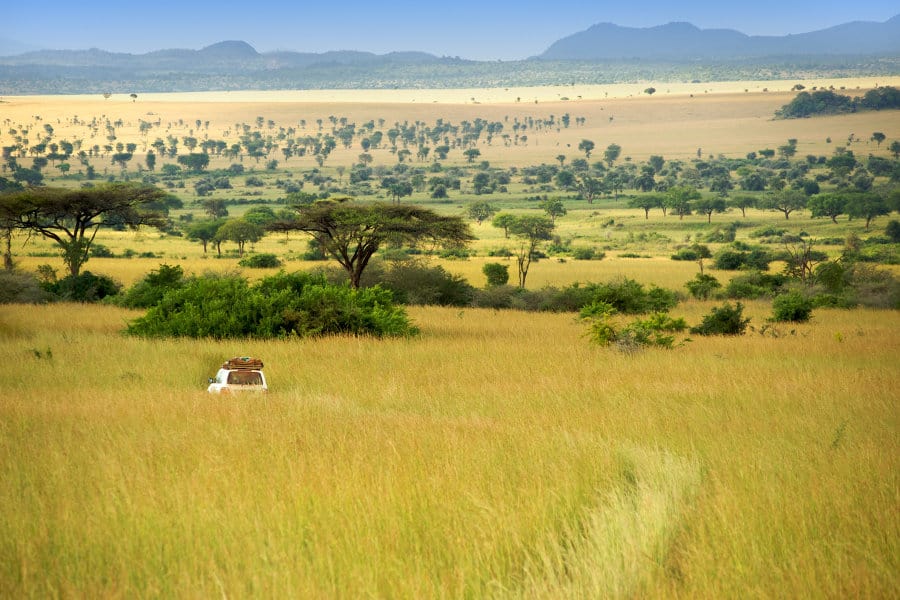 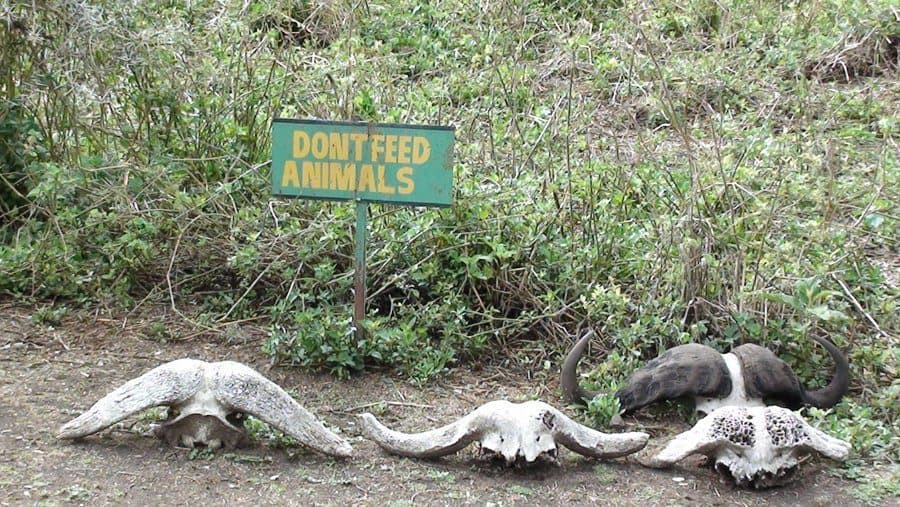 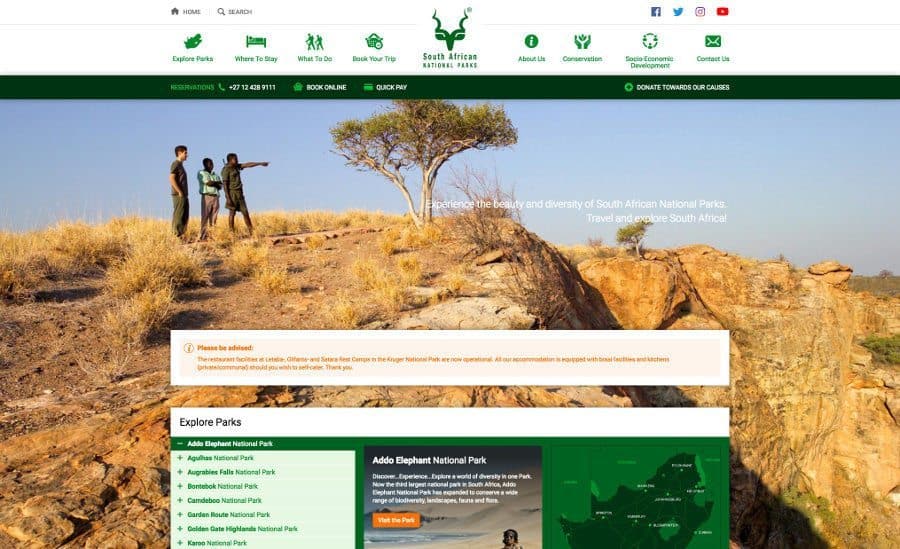